A stout defensive effort in the first half kept the Burroughs High football team within striking distance of undefeated Crescenta Valley on Thursday night at Moyse Field in Glendale.

What occurred over 21 seconds early in the third quarter helped the Falcons pull away and ultimately win 28-7 in a Pacific League encounter.

A 37-yard scramble by senior quarterback Cole Doyle made it 14-0 with 9:41 left and it became 21-0 when junior quarterback Nick Garcia was intercepted by junior defensive back Vincent Parrott, who raced 53 yards into the end zone as 9:20 remained. 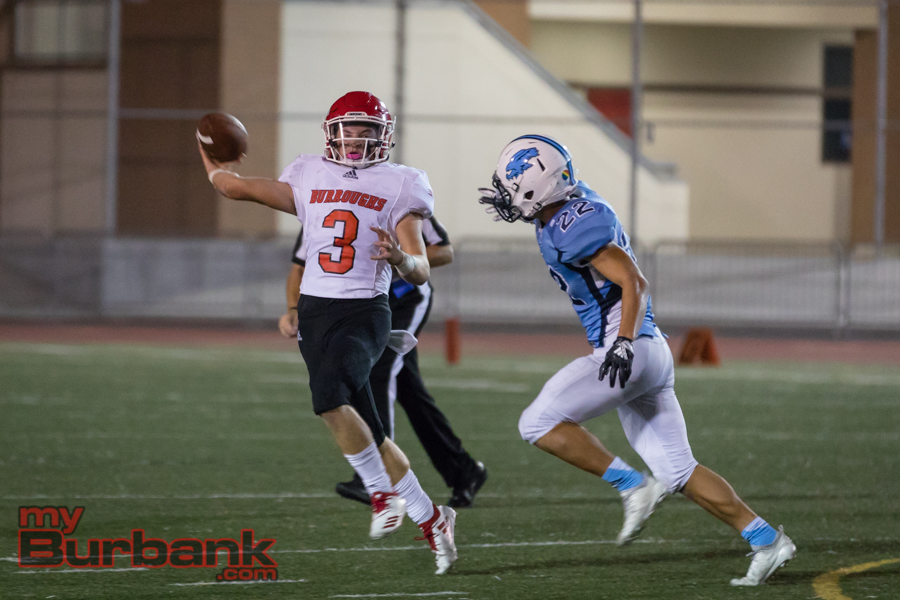 The Falcons (6-0 and 3-0 in league) then forged ahead 28-0 when the Indians were held to one yard on a trick play when junior wide receiver Aiden Forrester connected with Garcia on fourth and six from the Crescenta Valley 45-yard line.

Doyle capped a five-play, 54-yard march with a one-yard sneak as 3:19 was left in the third.

“Their D-line was super strong,” first-year Burroughs coach Rand Holdren said of the Falcons. “They’re a well coached team. They’re very good at what they do.”

The Indians (1-5 and 1-2 in league) scored their lone touchdown when Garcia (28 yards on five carries) galloped 30 yards as 32 seconds was left in the contest.

Burroughs’ defense kept the Falcons at bay during most of the opening half with the exception being when Doyle (126 yards on 21 carries) tacked on a nine-yard run with 12 seconds left in the first quarter that made it 7-0. 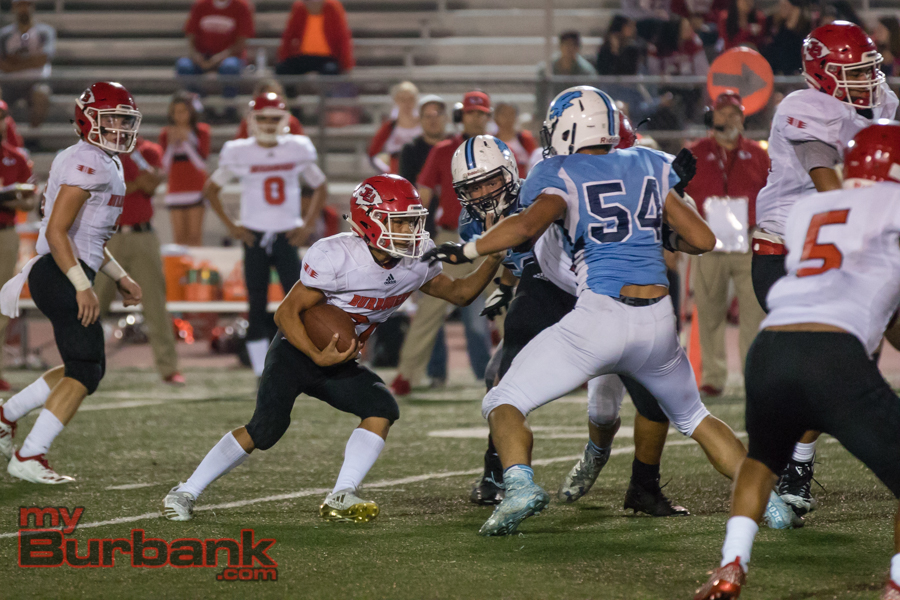 Luke Rogers had 47 yards on 21 carries against the Falcons. Photo By: Edward Tovmassian

The Indians (171 total net yards) forced the Falcons to punt on their opening drive and later picked off Doyle (14 of 21 for 146 yards with two interceptions) on Crescenta Valley’s third possession.

Crescenta Valley (335 total yards) punted on its fourth and fifth series and at times seemed frustrated at not being able to move the ball.

Likewise the Indians had a tough time advancing the ball, but it wasn’t for a lack of effort and were within scoring range twice.

Burroughs moved from the Falcons 30-yard line to the Crescenta Valley 18 when Garcia attempted a 35-yard field goal that drifted wide left with 4:16 on the clock.

“In the first quarter we got into the red zone two times,” Holdren said. “We’ve gotta finish in the red zone. I’m proud of our kids for fighting all the way through. We went into the half 7-0. We’re finding pieces that work.”

On a drive late in the first quarter that began at the Burroughs 42 and advanced to the Falcons 17, ended when Garcia’s pass fell incomplete on fourth and six. 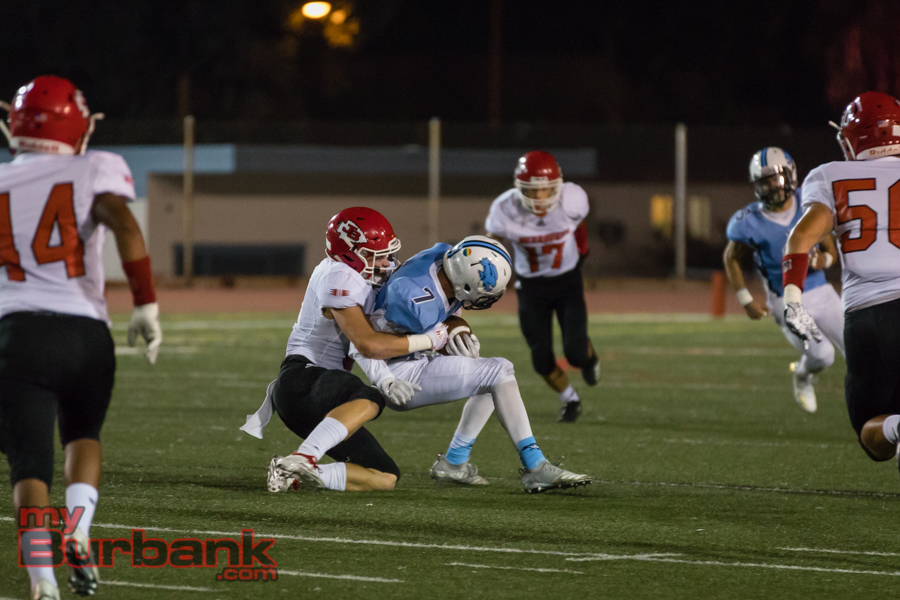 Colby Rees catching the ball for the Falcons. Photo By: Edward Tovmassian

Burroughs sophomore running back Luke Rogers is its top ground-gainer, but didn’t have much space to run, finishing with 47 yards on 21 rushes.

The same would hold true for senior quarterback Nathan Piper and his backup, Garcia, who were harassed most of the evening.

Piper completed 10 of 27 attempts for 109 yards with one interception, while Garcia didn’t complete a pass in five attempts with one pick.

“We’re trying our best to get it out quick and make the proper read,” Holdren said. “It’s hard to read the field. I’ve been there.”

Burroughs next travels to Muir for a Friday night Pacific League battle that kicks off at 7 p.m.

It took five attempts, but the Burroughs High football team finally earned its first win of the season.

In overwhelming fashion the Indians ran roughshod over Glendale 45-6 on Thursday night in a Pacific League game at Memorial Field.

The Indians (1-4 and 1-1 in league) leaned heavily on sophomore running back Luke Rogers, who had a game-best 204 yards on 23 carries. 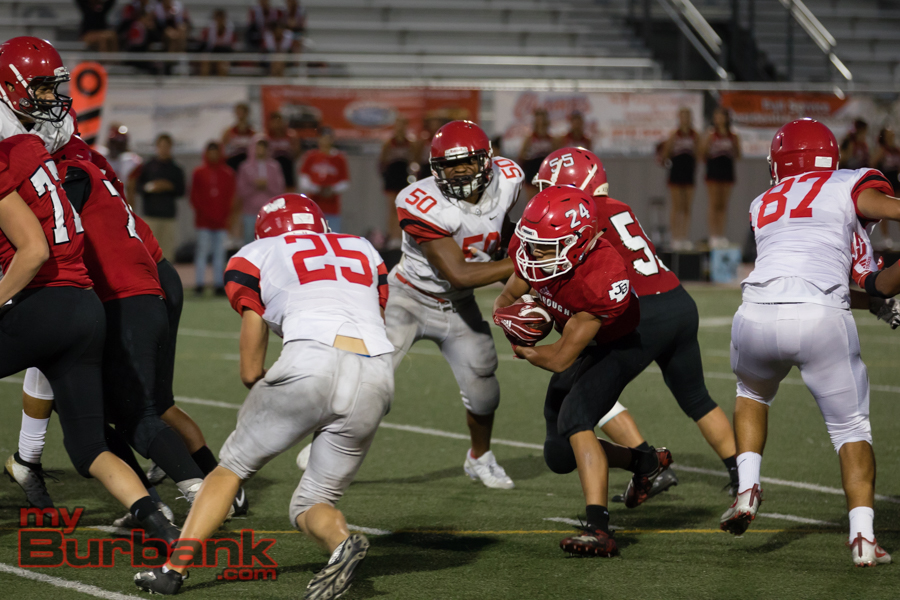 Luke Rogers finished with 207 yards and two scores in a 45-6 win over Glendale. Photo By: Edward Tovmassian

“It’s always a fun thing, especially with this O-line,” Rogers said of carrying the ball. “I thought Glendale played well. This game we finally put four quarters together.”

Rogers knows that Burroughs’ next game is going to be a great deal tougher when it faces powerful Crescenta Valley.

“I think we just need to keep working hard and trying our best,” Rogers said of the upcoming road game.

Rogers had a pair of scoring runs including a 55-yarder with 4:31 left in the third quarter that handed the Indians a 39-0 lead.

Rogers also delivered a two-yard romp into the end zone with 10:59 left in the second quarter for a 14-0 cushion. The Indians used eight plays that covered 58 yards.

“The kids played well and we executed,” first-year Burroughs coach Rand Holdren said. “That’s what our goal was today.” 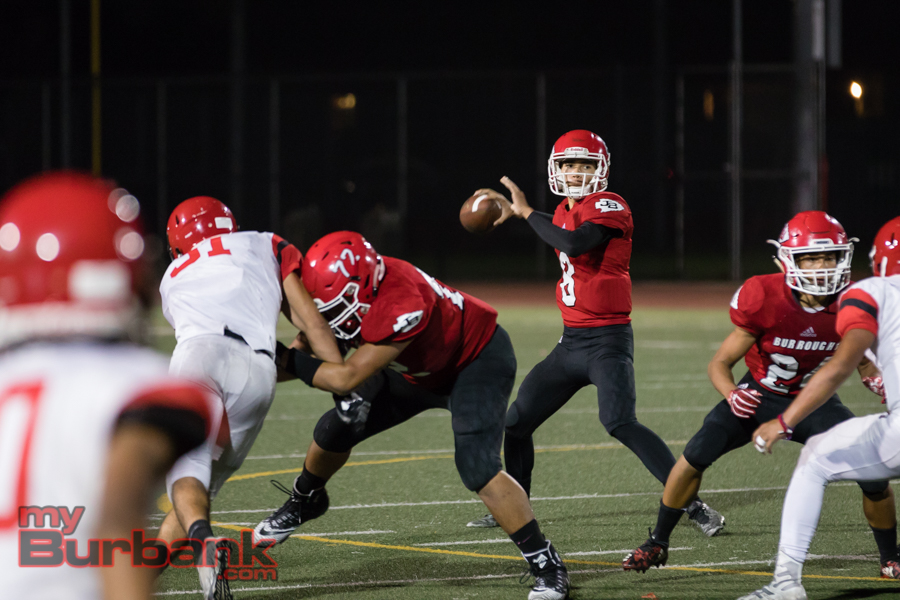 Quarterback Nathan Piper had a scoring pass in the first half. Photo By: Edward Tovmassian

The Indians’ defense was stellar as they allowed one touchdown when senior quarterback Trent Lousararian (five of 16 for 96 yards and one interception) drilled senior wide receiver Christopher Ibarra (86 yards on two catches) with a short pass that turned into a 78-yard play with 3:28 remaining in the third quarter as the Nitros (1-4 and 0-2 in league) cut the lead to 39-6.

Holdren was pleased with the outcome. “The first half I thought we did well,” he noted. “In the third quarter we were probably dragging, and then we started getting guys in.”

Burroughs controlled the clock throughout against Glendale (72 total net yards), but especially on the game’s opening drive which took seven minutes.

The march commenced at the Burroughs 20-yard line, consumed 17 plays and was capped when senior quarterback Nathan Piper (eight of 14 for 71 yards) hit senior wide receiver Nathan Turner (13 yards on two receptions) with a five-yard strike as 4:57 remained.

Burroughs (434 total yards) took a 21-0 lead into the dressing room after Piper (29 yards on five carries) called his own number and scored on a 20-yard scamper with 57.9 seconds left. 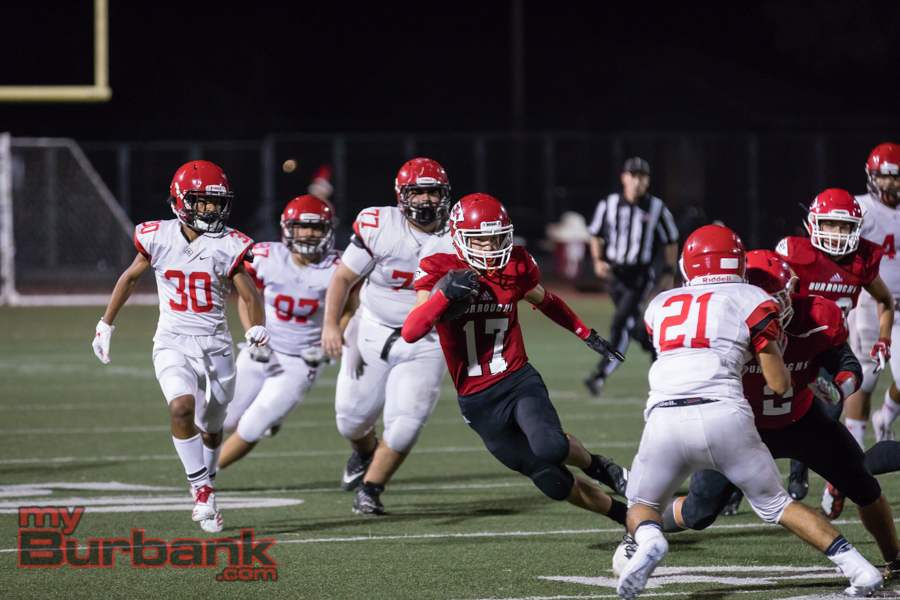 Burroughs scored on three consecutive drives  to begin the second half.

The first made it 27-0 when junior backup quarterback Nick Garcia (three of five for 33 yards) hammered senior wide receiver Johnny Factora with a six-yard toss as 8:57 remained, closing a 35-yard, four-play drive.

The Indians’ lead swelled to 45-6 when junior running back Adrian Leon (39 yards on six rushes) raced in from 12 yards out and 9:24 left, finalizing a 39-yard, five-play excursion.

Burroughs will face the undefeated Falcons next Thursday at Moyse Field in Glendale with a 7 p.m. kickoff. 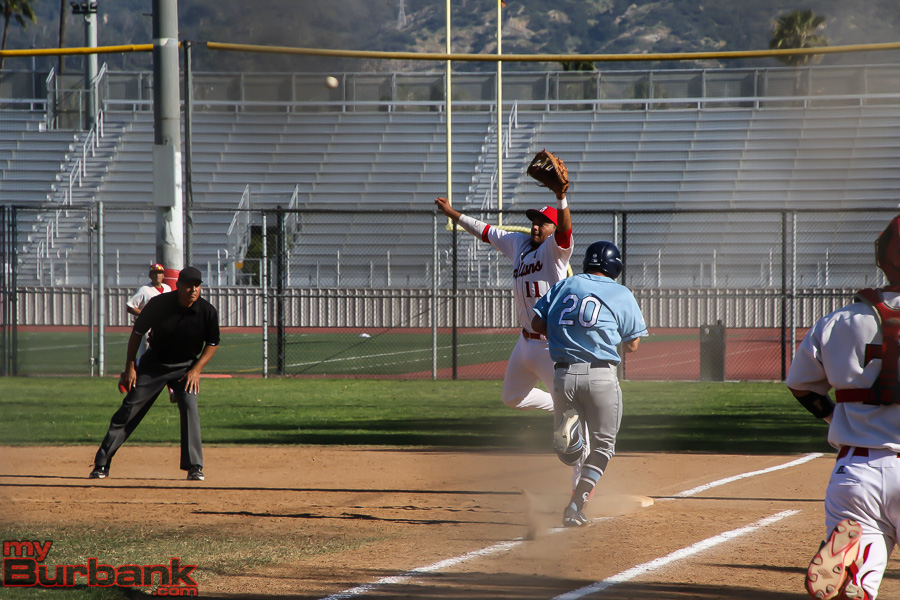 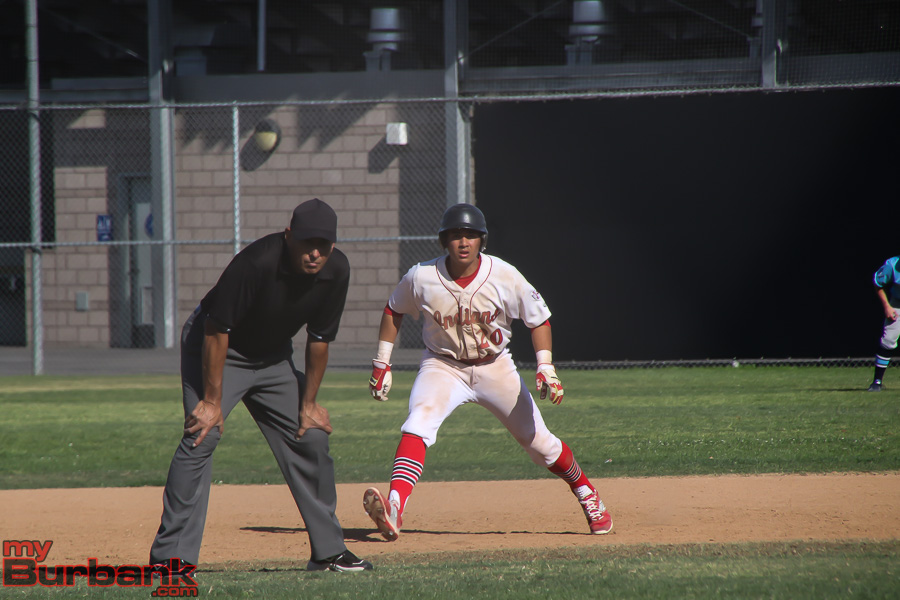 Good fortune wasn’t shining down on the Burroughs High football team when it faced Crescenta Valley at Moyse Field on Friday night.

Senior tailback Chance Bell injured his ankle in the opening half and senior quarterback Hayden Zepeda missed the second half with a right knee injury as the Indians lost 38-9 in a Pacific League showdown.

The Indians (4-4 and 3-2 in league) could muster only three field goals from junior kicker Jonathan Rivas. 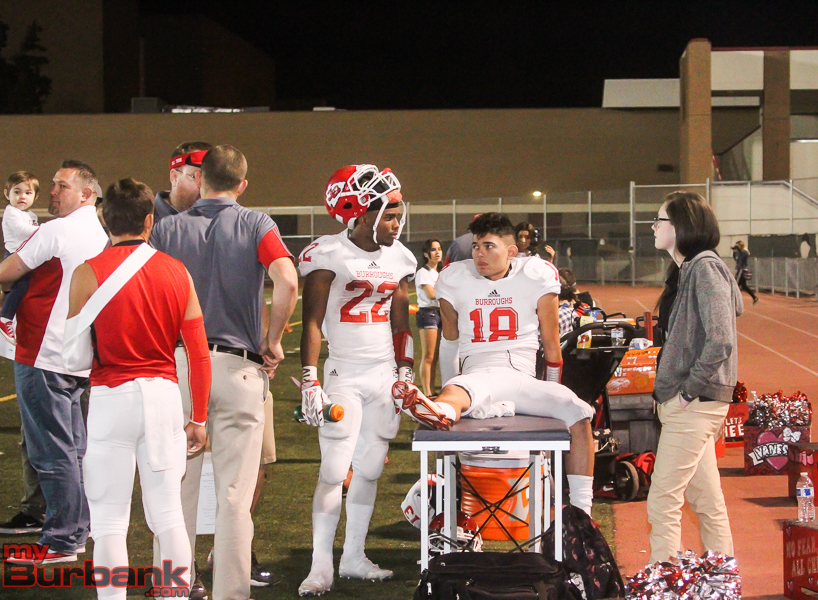 The Falcons (7-1 and 5-0 in league) have given up 29 points in league play and will face Burbank, ranked No. 8 in the CIF Southern Section Division VIII and undefeated in league, on the road Friday.

“We made good adjustments at halftime,” Burroughs coach Mike Reily said. “We just had bad luck [with the injuries]. I was happy with the kids in how they battled. They were playing inspired football.”

Rivas’ first kick was a 22-yarder and came with 6:41 left in the initial quarter that cut the Falcons, ranked No. 10 in Division VI, advantage to 7-3. 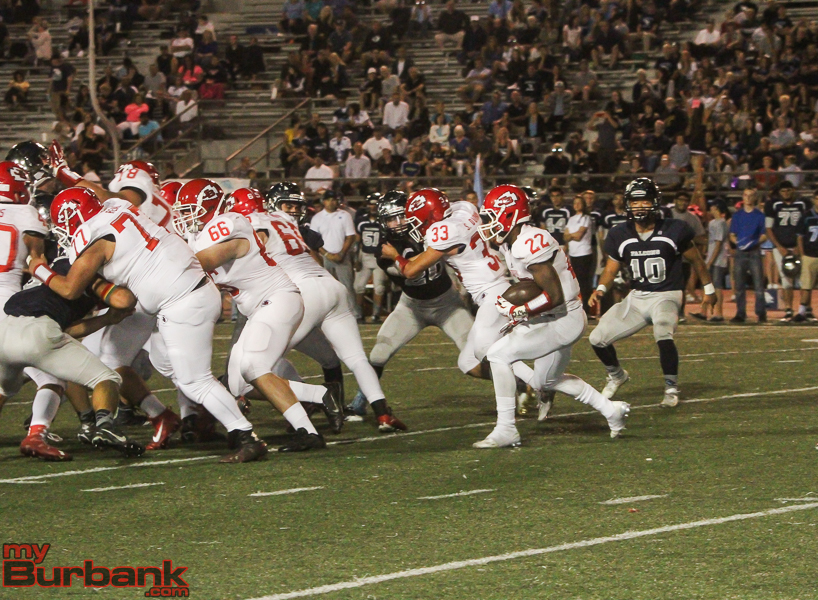 Bell was kept out of the end zone by the stubborn Falcons defense. (Photo by © Ross A. Benson)

When Rivas converted from 42 yards out and 27 seconds left before the half, Crescenta Valley’s cushion was shaved to 24-6 and his 43-yard attempt with 9:31 showing in the third quarter made it 24-9.

Bell battled and finished with a game-best 235 yards on 35 carries, but didn’t find the end zone.

It was a tough evening all around as the Indians managed just 298 total net yards.

Zepeda hit on seven of 15 pass attempts for 62 yards, but was intercepted by junior defensive back Grady Schilling, who returned the ball for a 45-yard touchdown and 3:18 left in the second quarter as the Falcons pulled ahead 24-3.

Zepeda also said the offensive scheme was sound. “We had a good game play,” he pointed out. “But injuries happen. They’re part of the game.” 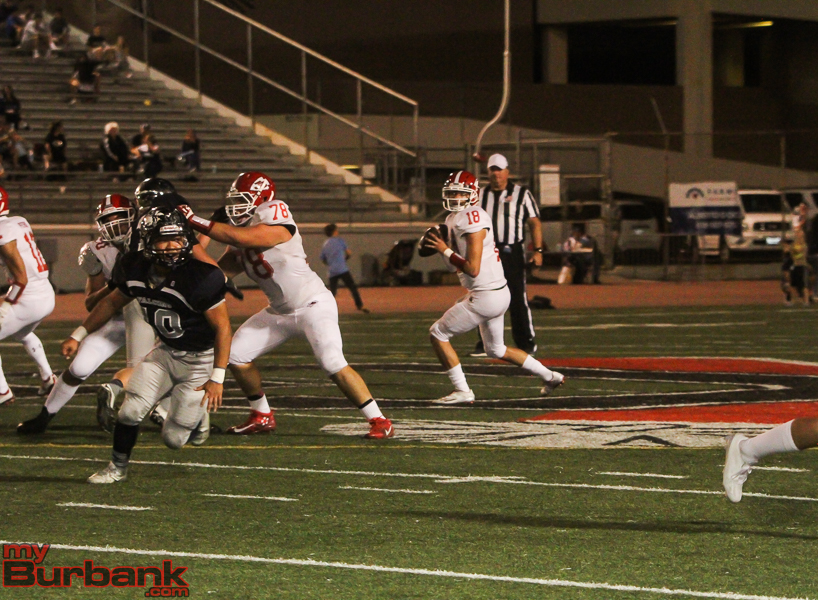 Senior field general Hayden Zepeda about to pass the football. (Photo by © Ross A. Benson)

Once again, Reily wanted to pass the football knowing the Falcons were going to key on Bell, who came into the contest having scored 25 touchdowns.

“We wanted a well-rounded game plan,” he said. “Spread the ball around.” 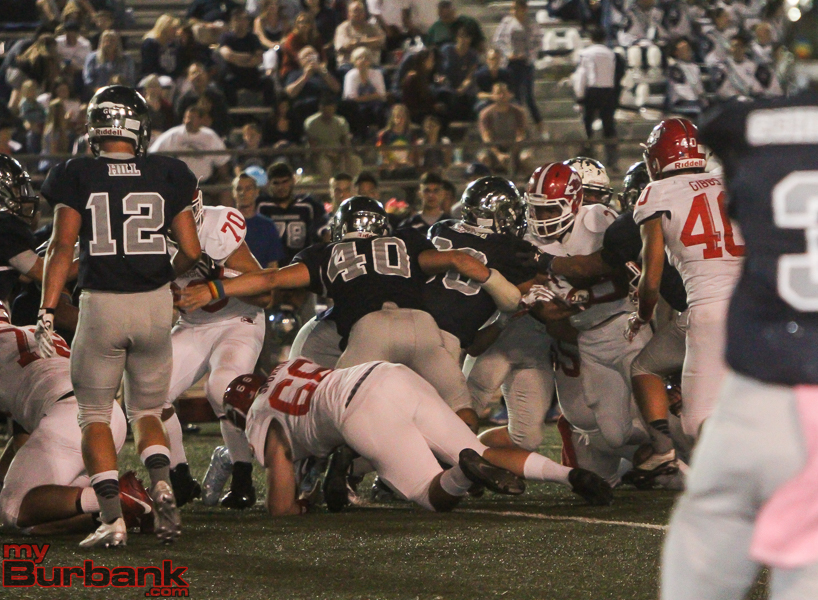 Sophomore quarterback Cole Doyle found senior wide receiver Will Rees with a 14-yard strike and 6:45 remaining before the half to make it 17-3.

With 6:25 showing in the third quarter, the Falcons then darted ahead 31-9 on Doyle’s one-yard keeper, ending a drive that began at the Crescenta Valley 22-yard line and consumed nine plays.

It became a 29-point spread after an 18-yard jaunt by sophomore running back Daniel Cho with 2:42 left in the contest.

The Indians will face Muir on the road on Friday with a 7 p.m. kickoff.