A Burbank man out for a bicycle ride along the Chandler Bikeway Friday morning, collided with a large metal pole used to keep cars from entering the popular waking and cycling path.

Neil Chamberlain, 52, of Burbank, was riding eastbound on the bikeway with his wife, Nancy, at 9:30 a.m.  She was a few blocks ahead of him, when he crossed Keystone St.  According to witnesses, Chamberlain was not traveling fast when he hit the yellow metal pole located between the bicycle and pedestrian lanes of the bikeway, about 10 feet from the street.

According to Crossing Guard Harrie Niers, who was just completing his assignment at the corner adjacent to Thomas Edison Elementary School, the cyclist fell sideways off his bike after impacting the pole with the right side of his body.  As Chamberlain clutched his injured chest and writhed in pain on the sidewalk, passersby came to his aide and immediately called police and fire department paramedics.

Although in a great deal of pain, Chamberlain was finally able to take out his own cell phone and call his wife, who was several blocks ahead on the bikeway.  She immediately rushed back on her bike to comfort her husband.  Burbank Fire Department Rescue Ambulance 15 and Engine 11, arrived shortly thereafter and began treating the victim.  Chamberlain was transported to Providence St. Joseph Medical Center.  According to his wife, he sustained fractures to two ribs and bruising along his right side.  He was treated and returned home Friday afternoon.

Remarkably, his bicycle did not appear to have sustained any serious damage.  Most of the impact was between Chamberlain’s right side and the pole, not the bicycle. According to his wife, he is an veteran mountain biker.  She speculated that her husband may have been distracted and didn’t see the pole.  She noted that today was his day off from work.

After Chamberlain was transported to the hospital in the ambulance, his wife rode her bicycle back to their home on Niagara St., and the crew from Engine 11 dropped his bike off at their home.   The couple is supposed to ride in a 68-mile cycling event in Joshua Tree in about three weeks.  According to Mrs. Chamberlain, that is now in doubt. 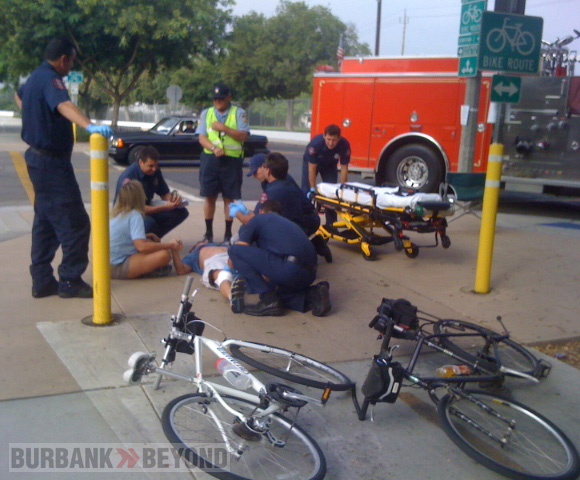 Burbank Fire Department personnel administer first aid to bicyclist Neil Chamberlain, who ran into yellow metal pole on left on the Chandler Bikeway at Keystone St. Friday morning. His wife, in light blue shirt next to him, conforts the injured man. He sustained moderate injuries. (Photo by Stan Lynch)