For the majority of the opening half of Thursday afternoon’s Pacific League girls’ soccer match between Burbank High and host Burroughs, it was dominated by the Bulldogs.

The second half was a different matter and especially during injury time when junior forward Tatiana Mosdale evened it at 2-2 on a goal from 20 yards against senior goalie Isabella Palau.

“We always need to play our hardest,” Mosdale said of the rivalry between the two schools. “We were all a little nervous. I was very excited. A tie is better than a loss.”

The first time these rivals met, the Bulldogs prevailed 2-1 and had not Mosdale kicked in the tying goal in the regular-season finale, it would have been another setback for the Indians. 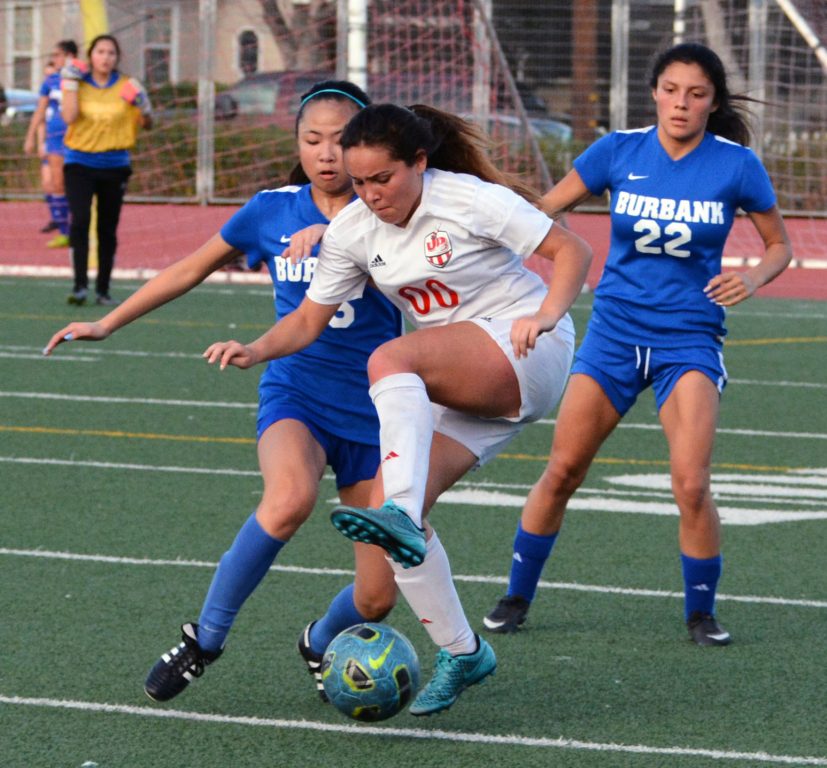 Up to that point, Burbank, which finished fourth in league, held a one-goal lead on the strength of two first-half tallies from senior forward Kira Bochard.

But it was level at 1-1 a minute later on a goal by senior forward Maddie Riggs from 10 yards off a rebound.

In the 35th minute, Bochard’s shot on goal from 10 yards made it 2-1 as Burbank took the lead at the intermission.

“We played pretty good in the first half,” said Bochard, who will play soccer and run track at the University of Montevallo in Alabama. “We created more opportunities. In the second half we mostly tried to hold on.” 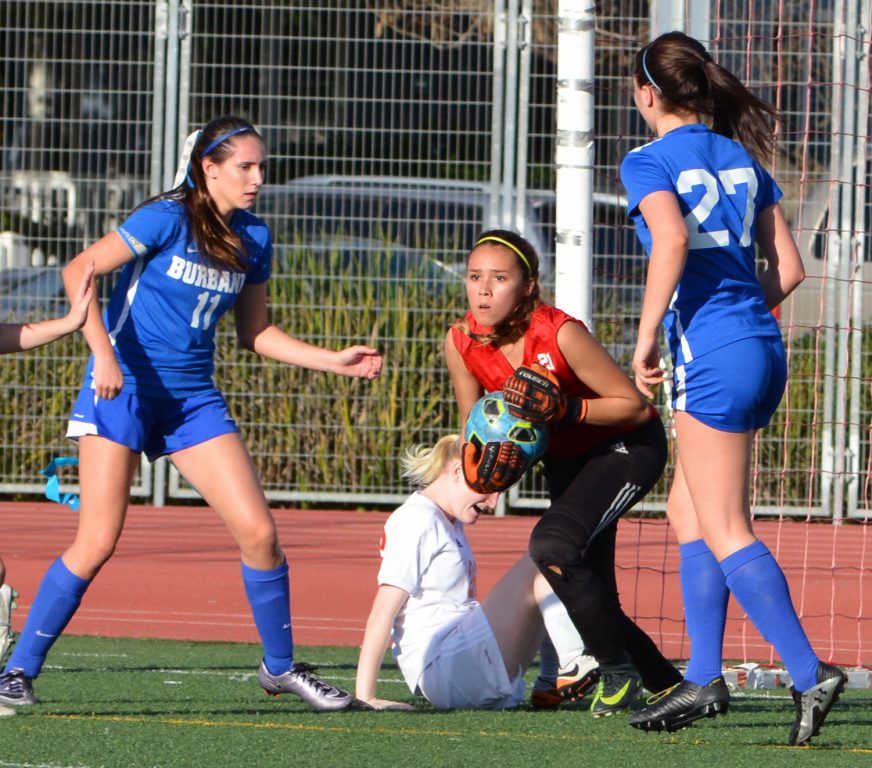 The second half shifted in favor of the Indians, who placed third in league play and were on offense it seems the entire time against a tired Burbank defense.

“We gave them too many presents,” Burbank coach Eric Montoya said. “That second goal shouldn’t have happened. Our conditioning hurt us.” 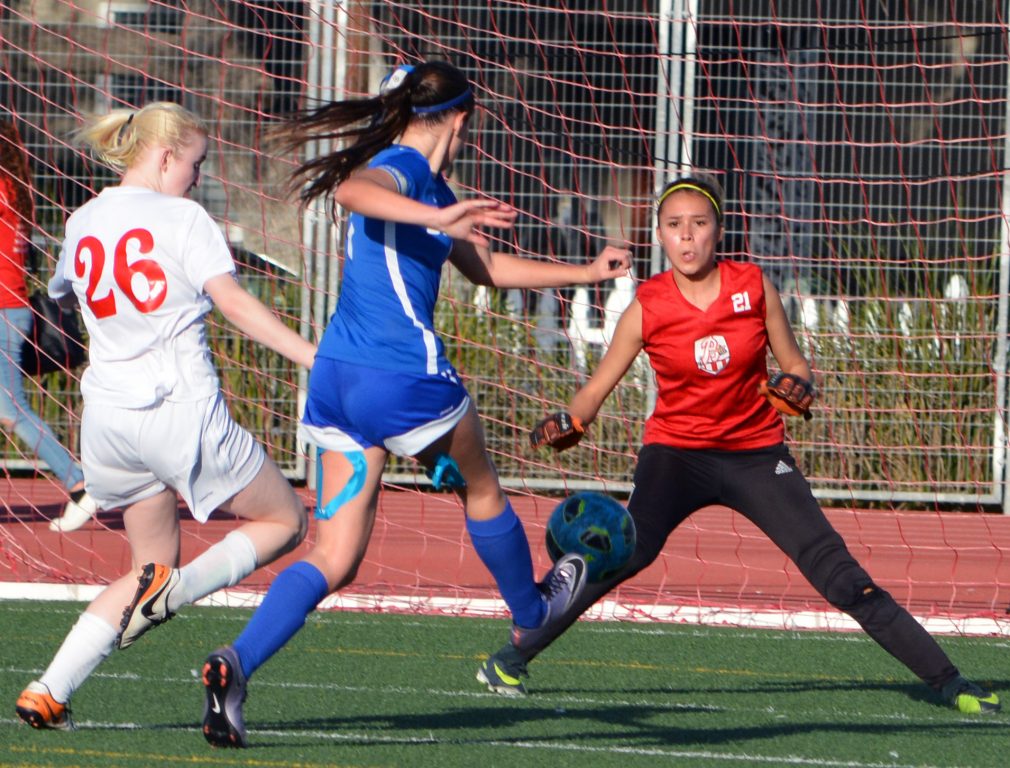 “We continued to try and play our game,” Burroughs coach Brady Riggs said of the opening half. “What they [Burbank] do, they do well. We stuck to our style of play in the second half.”

Burroughs senior midfielder Alondra Solis had a shot on goal from 20 yards in the 54th minute and Riggs had a 25-yarder sail wide left in the 61st minute.

Gonzalez’s 15-yarder in the 63rd minute was blocked and a 15-yarder by Solis in the 65th minute also failed to find the net.

The Bulldogs broke the spell briefly on sophomore forward Jessica Rocha’s 35-yard shot on goal in the 69th minute.

It took seven games before the Burbank High girls’ soccer team had its first win.

Since then the Bulldogs have played with more consistency and on Wednesday hosted Burroughs which they held off 2-1 in a Pacific League match. 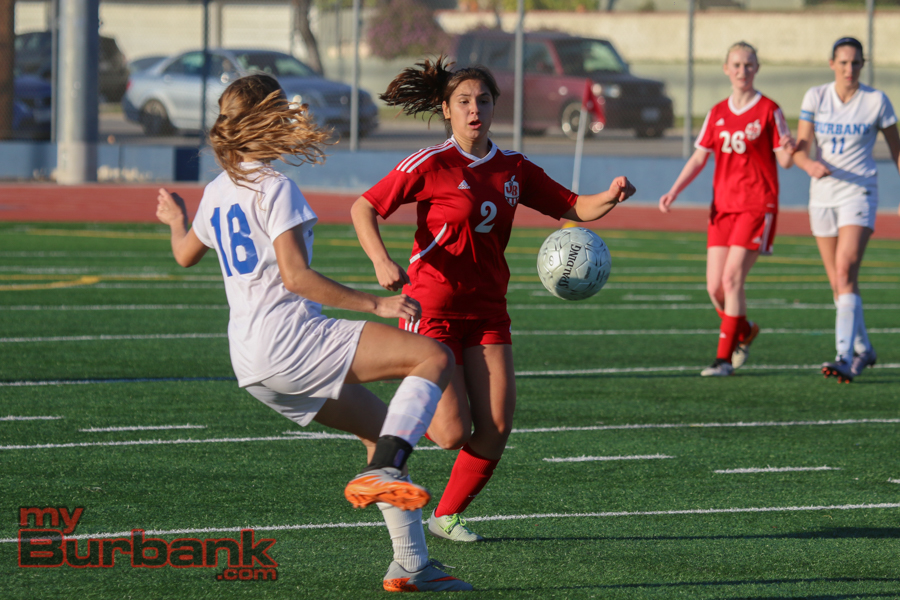 Burbank (3-8-2 and 3-4-2 in league) seized control 1-0 on a goal from sophomore midfielder Maria Perez from 10 yards and just under nine minutes left in the opening half.

For Perez, a transfer from Birmingham, Alabama, this was her first involvement in the rivalry.

“I just knew they were rivals,” she said. “It was pretty intense. It felt pretty good to get the win and the goal. I felt the support from the girls.”

Burbank’s lead was extended to 2-0 on a tally by senior forward Kira Bochard from 25 yards and 13 minutes remaining in the second half.

“I think that we’re finally starting to jell,” Burbank coach Eric Montoya said. “They trust each other now. I think a win like this gives us a lot of confidence for the [CIF Southern Section] playoffs, if we make it that far.” 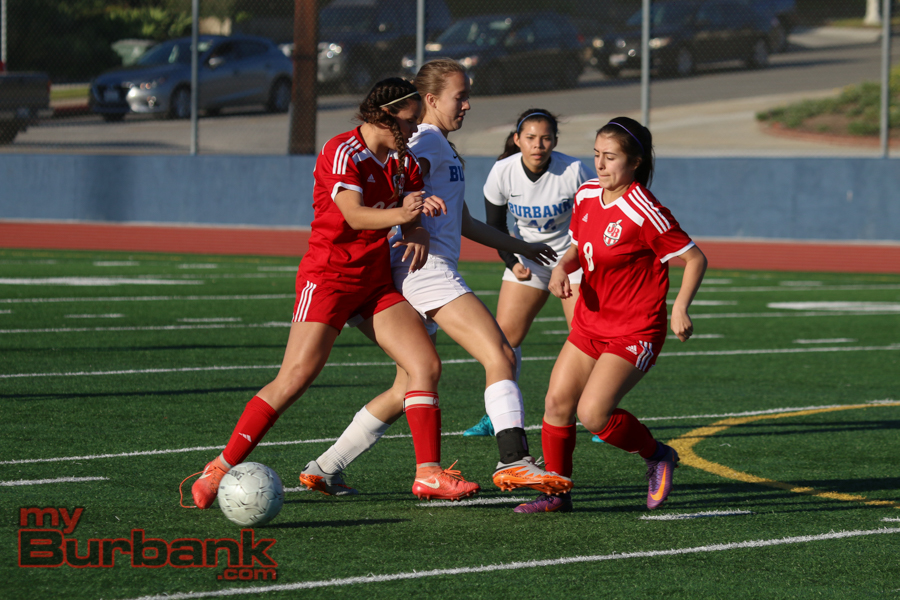 But there was still enough time for the Indians to make a serious run and it was made even more likely when senior midfielder Maddie Riggs knocked one into the net off a rebound with 12 minutes on the clock.

On the play, junior forward Tatiana Mosdale’s shot from point-blank range hit the top of the goal and bounced downward at Riggs, who banged it home.

“We played better in the second half,” Burroughs coach Brady Riggs said. “I’m pleased with the effort, as always. I’m trying to develop soccer players here.”

What followed from this juncture was four consecutive kicks from the Bulldogs, who recently tied Crescenta Valley 3-3 and defeated Muir 10-0, was a boot from 10 yards by senior defender Melanie Tirado with 10 minutes, a blast from senior midfielder Danielle Yanez a minute later from 15 yards, a strike from sophomore midfielder Isabel Partida and Bochard’s kick with seven minutes left that senior goalie Emily Orsatt saved brilliantly.

Burroughs (10-6-1 and 6-3 in league) did have two shots during the extra time against senior goalie Nicole Winters. They came from senior midfielder Alondra Solis and Riggs.

There were no attempts from either team during the first 11 minutes until junior forward Adrianna Sarukhanyan’s kick from 20 yards and 28 minutes left that sailed too high. 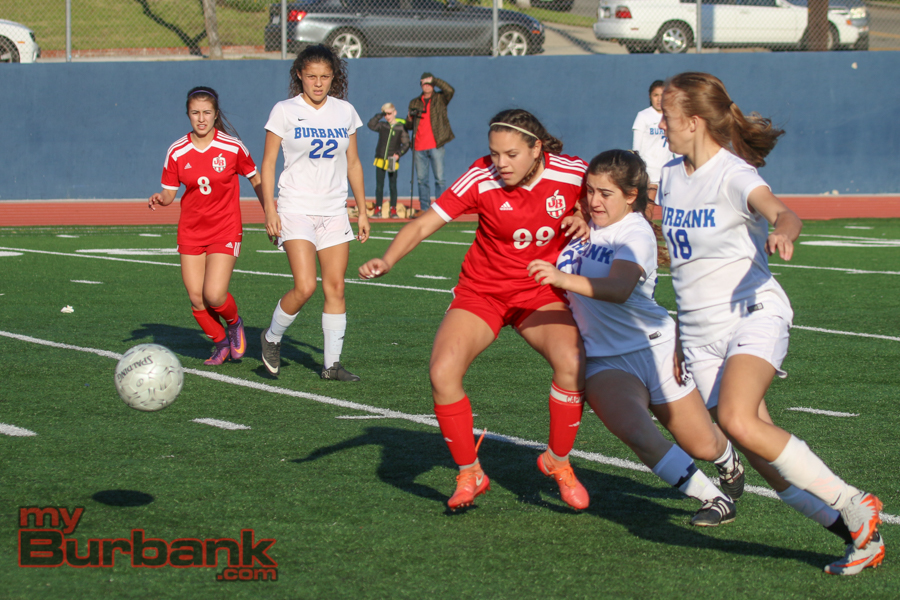 With 18 minutes left, Yanez’s penalty kick from 25 yards ventured wide left and with 12 minutes remaining, Partida’s try from 10 yards was scooped up by Orsatt.

Sarukhanyan’s kick from 25 yards and seven minutes remaining didn’t find the net and her attempt two minutes later from the same distance also failed to hit the back of the net.

The second half opened with senior midfielder Mireya Gonzalez’s kick from 10 yards and 38 minutes left and Yanez’s attempt from 30 yards, one minute later.

With 34 minutes left, Mosdale had an excellent opportunity for a kick, but she passed the ball to Maddie Riggs, who had the ball blocked.

Yanez’s throw-in landed in the box with 19 minutes left, but Orsatt grabbed it and Mosdale’s attempt with 15 minutes showing was wide left. 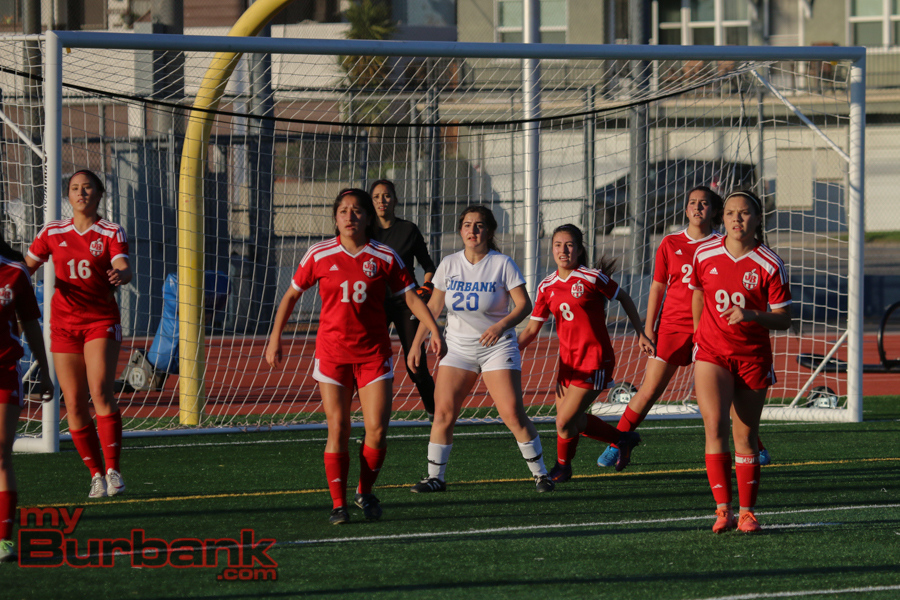