With the Los Angeles Dodgers and New York Mets set to square off in the first round of the MLB playoffs – the National League Division Series – Reps. Adam Schiff (D-Burbank) and Steve Israel (D-NY) today announced they had placed a friendly wager on the outcome of the series.  The winner of the bet shall receive a local food from their district. 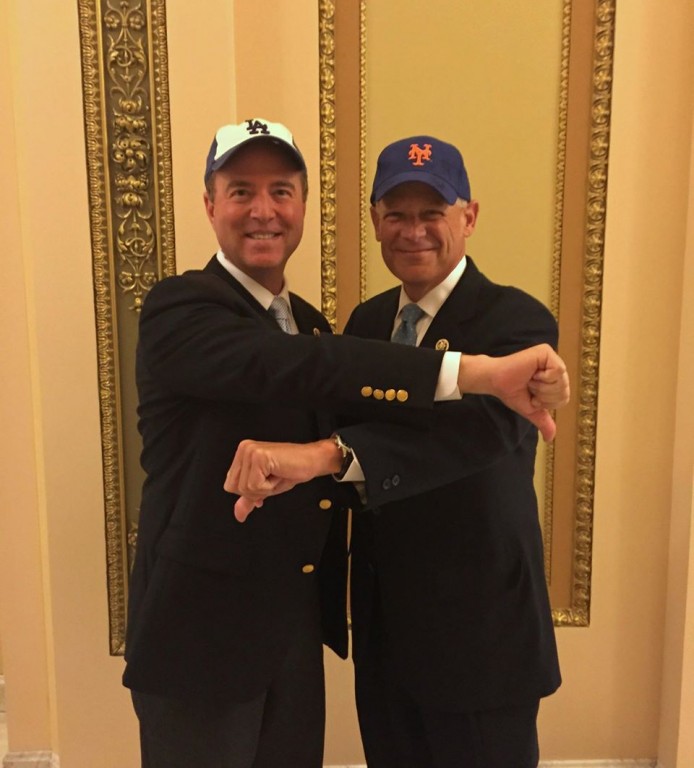 Schiff, who represents the areas surrounding Dodger Stadium, wagered gourmet popcorn from Pauline’s Premier Sweets in Burbank, befitting his Hollywood district. Israel, who is a Mets fan representing areas surrounding Citi Field, wagered New York bagels, flown in fresh. Additionally, the loser will wear the tie of the winner’s team and deliver a one minute speech on the House floor extolling the virtues of the team moving on to the next playoff round.

“There isn’t any question in my mind that the Boys in Blue will best the Loveable Losers, and I can already taste the delicious New York bagels that will be flown in the day the Mets blow it,” said Schiff. “I’m looking forward to seeing the Dodgers continue in their hunt for Blue October after the Mets are long vanquished.  Please make sure the lox is fresh, Steve.”

“I hope that Adam will also consider sending a broom so that I can sweep his fancy L.A. popcorn off my floor in the same way my beloved Mets will sweep the Dodgers,” said Israel. “Let’s face it; once his team left New York, it was all downhill from there. Let’s go Mets!”

The Los Angeles Dodgers and Metro will once again offer Dodger Stadium Express bus service from Union Station to Dodger Stadium this season through a grant approved by the Mobile Source Air Pollution Reduction Review Committee (MSRC). Service will begin on April 3 before the Dodgers’ exhibition game against the Angels and continue throughout the season.

For the third consecutive year, a grant of $300,000 was awarded to Metro by the MSRC in support of clean fuel transit service to link Union Station to Dodger Stadium. Funding under the grant will be used to offset the cost of fares on the Dodger Stadium Express bus service for passengers possessing a Dodgers ticket. Dodger game tickets will be honored as fare payment to ride the bus service and those without a ticket will pay the regular one-way fare of $1.50.

Last year, the Dodger Stadium Express bus service transported more than 116,000 fans with 68 percent of those riders using public transportation from their place of origin to get to Union Station to take advantage of the special bus service to the games.

The Dodger Stadium Express will pick up fans at the Patsaouras Bus Plaza adjacent to the east portal of Union Station and continue to Dodger Stadium via Sunset Blvd. and Cesar Chavez Avenue. Passengers will be dropped off and picked up in Dodger Stadium’s parking lot G in center field. Service will start 90 minutes prior to the beginning of the games and will end 45 minutes after the end of the game. Shuttles will run every 10 minutes before the game and run approximately every 30 minutes after the game starts.

Metro will deploy state-of-the-art 40-foot clean burning compressed natural gas (CNG) buses, as MSRC funding is awarded within the South Coast Air Basin from a portion of the vehicle registration fee set aside for mobile source projects that result in emission reductions. The Dodger Stadium Express bus service will be provided by Veolia Transportation under contract to Metro.

The Dodgers will hold Red, White and Dodger Blue National Anthem Auditions on Saturday, March 31 at Dodger Stadium and performers will be chosen to sing the “Star-Spangled Banner” at home games this season. One participant will be selected to sing the national anthem at the Dodgers’ first home game in Los Angeles, as they take on the Angels on April 3.

Dodger Stadium anthem singers include numerous celebrities, Grammy Award-winning recording artists, stadium ushers and Dodger alumni and participants will have the chance to join that prestigious group. Entry to the Red, White and Dodger Blue National Anthem Auditions will be free.

Auditions will be held from 9:00 a.m. until 6:00 p.m. on a first-come, first-served basis and fans will be able to enter the stadium from 9:00 – 11:00 a.m. All performers are encouraged to bring a resume and a DVD copy of their anthem rendition and may bring one guest with them inside the stadium. Fans will sing a portion of the song a capella and performers under the age of 18 must be accompanied by a parent or guardian.

Performers will enter the stadium through the Sunset Gate on Elysian Park Avenue and park in Lot G. Fans will enter the stadium through the Field Level entrance on the third base concourse and the auditions will take place on the field in front of the Dodger dugout. For more information and to download the participant waiver, visit www.dodgers.com/anthem. National anthem renditions can also be emailed to nationalanthem@ladodgers.com.

This event was the third holiday shopping trip Ethier has sponsored, as he has treated children from A Better L.A. and the Los Angeles County Department of Children and Family Services to similar excursions in the past.

Just this year, Ethier has given his time to the community by volunteering at Union Rescue Mission downtown, visiting the 35th annual City of Hope Celebration of Life Bone Marrow Transplant Reunion and speaking at Dodgers Youth Baseball Camp twice.

For more information about the Dodgers’ holiday giving efforts, which annually include a children’s holiday party, a Thanksgiving turkey giveaway and a holiday ham giveaway, visit www.dodgers.com/community.

It was once again Burbank Night at Dodger Stadium and members of the City Council and other Burbankers were on hand for the ceremonial first pitch and stayed for the game which saw the Dodgers beat the Diamondbacks 4-3.  Mayor Jess Talamantes got the call to take the bump, which he did in the jersey that his brother made for him which featured the name ‘Burbank’ and the number 100.  Dave Golonski  got behind the dish to catch the pill.  Although the radar gun had still not been turned on, eye-witness accounts had the Mayor in the high 80’s with a two-seem fastball that backed up!