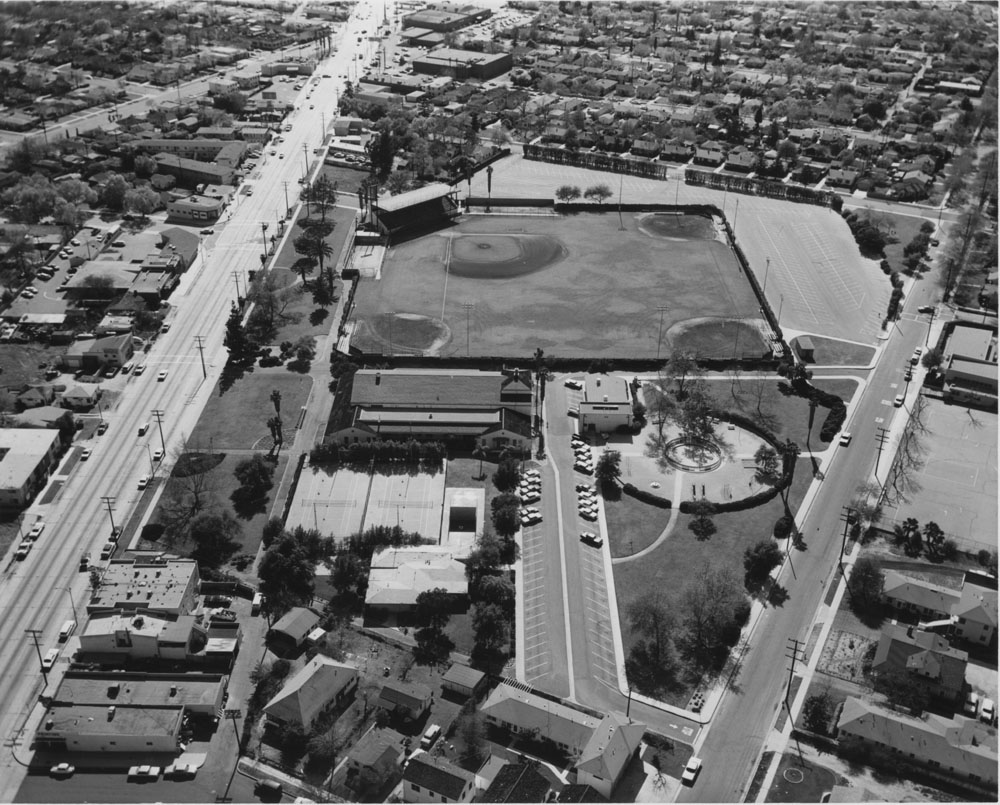 With Major League Baseball spring training underway, we thought it would be fun to reminisce on the St. Louis Browns existence at Olive Memorial Stadium. Below is the story of their stay as well as a video that captures a bit of history here in Burbank.

Olive Memorial Stadium was home to the St. Louis Browns for spring training from 1949 – 1952 (Photo courtesy of Wes Clark and Mike McDaniel)

Gone but not forgotten. Quiet but not silent. From 1947 to 1989, a brick-facade stadium located at 1111 W. Olive Ave. (now known as George Izay Park) was home to Burbank residents and guests who utilized the facility for America’s national pastime of baseball. Guests you might ask? Who might that be? Well, Olive Memorial Stadium was home to the St. Louis Browns of Major League Baseball during spring training from 1949 to 1952.

It’s been 20 years now since the demolition of the ‘ole stadium. Tucked away in the southwest corner of the park, this grand old venue with a seating capacity of 1,000 people hosted each spring what many critics called the “worst team in the history of baseball.”

Built in 1947 for $64,425, closed to the public in 1989, and razed in 1995, Olive Memorial Stadium provided for four spring seasons a setting where the St. Louis Browns of the American League could enjoy an atmosphere of competitive baseball, beautiful weather and friendly crowds.

All that remains now is a memorial concrete column with plaques that was awarded to the city of Burbank on December 14, 1945, and was dedicated on May 30, 1947, to honor Burbank residents who were killed in World War II.

“First in shoes, first in booze, and last in the American League” was an expression synonymous with the St. Louis Browns. In their 52 year history, the “Brownies” finished in last place in their division 14 times and seventh 12 times. They only had three top-two finishes in their history. The Browns finished their St. Louis stay with a morbid overall record of 3,414 wins and 4,465 losses.

The lone bright spot in their franchise history was the victorious 1944 American League pennant over the Detroit Tigers. In an All-St. Louis World Series, the Browns lost to their city rival, the St. Louis Cardinals, in the ‘Streetcar Series’ four games to two held at Sportsman’s Park.

Discovered in 1901 as the original Milwaukee Brewers, the Browns moved and became residents of St. Louis in 1902 and stayed there through the 1953 season. In 1954, because of direct competition with the Cardinals and their wealthy and popular owner August A. Busch Jr., Browns owner Bill Veeck sold the team and the squad re-located to Baltimore where they became the Orioles. 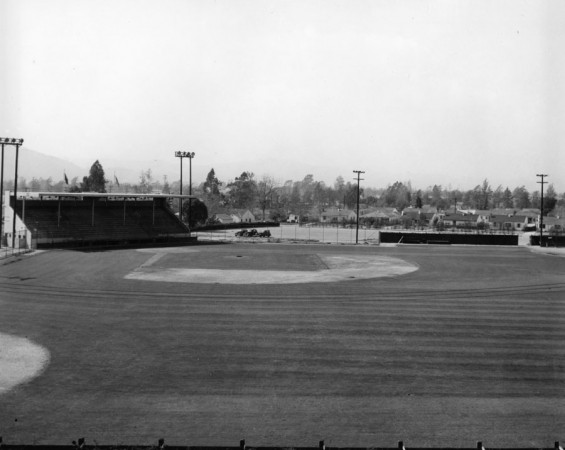 For one month a year, the Browns called the city of Burbank home. The players lived across the street at the Olive Manor Motel (since demolished). Despite their poor play throughout the years, the Browns were supported with open arms by the citizens of Burbank.  As it is now like it was back then, spring training represents the preparation and beginning of the major league baseball season when hope springs eternal and spirits are high.

Local Burbank workers came by during their lunch hour to catch a glimpse of some of baseball’s finest players. Families descended in droves upon this popular park in hopes of seeing their heroes. With the Chicago Cubs playing in nearby Avalon on Catalina Island, the Pittsburgh Pirates in San Bernardino, the Chicago White Sox in Pasadena and the New York Giants in Phoenix, chances of seeing a favorite player or even a Hollywood celebrity was very good.

Bob Hope, Bing Crosby, Andy Devine, Eddie “Rochester” Anderson, Nat King Cole, Dinah Shore and Marilyn Monroe were sighted visiting with the players in the clubhouse after practices and games. Maybe they weren’t the New York Yankees, but these “Brownies” were popular with the city of Burbank and its loyal fans.

It has been said that the Browns even upstaged Burbank On Parade, the city’s annual parade. By drawing crowds as large as 2,500, Olive Memorial Stadium was filled to capacity with fans lining along the left and right field foul lines. Spring baseball fever was alive and well in Burbank as the Browns and their opponents entertained the throngs of fans.

Right here in our own backyard.

After the Browns left Burbank, the stadium was primarily used throughout the years for amateur and semi-pro baseball such as American Legion Post 150 as well as for the local high school teams and occasionally the Hollywood Stars. As the decades came and went, the stadium became more and more neglected. Grafitti, cracks in the concrete, splintered bleachers and a warped roof covered the facility.

The stadium closed in 1989 and for six years thereafter, debates and arguments raged on for the future of this historic site. Should it be renovated? Should it be destroyed and a new baseball structure built? Ultimately, the facility was rendered unsafe by the Burbank City Council.

Citing the poor dilapidated condition of the venue, the popularity of area softball and the expensive cost to rebuild a new baseball stadium (between $800,000 and a $1,000,000), Olive Memorial Stadium was demolished in 1995 and replaced with the current softball field in existence. 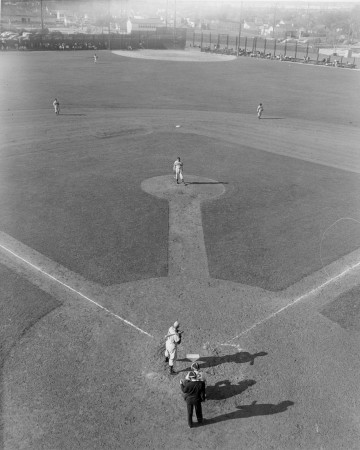 On a casual Sunday afternoon drive heading north on Olive Ave., look to your left as you pass by George Izay Park and try to remember or even reminisce what Burbank once had: the St. Louis Browns and Major League Baseball entertaining Burbankers.

Just imagine in your head for a second the following scene at Olive Memorial Stadium: Browns Manager Rogers Hornsby in the dugout with his pitcher and legend Satchel Paige on the mound. At first base is the Giants’ Bobby Thomson and at the plate is a youngster named Willie Mays. Now those were the days. And I wasn’t even born yet….

myBurbank.com would like to thank the Burbank Historical Society and long-time Burbank resident Dr. Joe Dossen for their generosity and insight into the St. Louis Browns as well as Wes Clark and Mike McDaniel for allowing us to use their photography.

In honor of the St. Louis Browns, here are some exclusive personal accounts given by the former “Brownie” players.

On Spring Training– “We played the Cubs a lot. We formed some lasting friendships. The Brownie spring camps always were fun. Good fields, good lodging, everything first class. I loved the Browns and still do.” 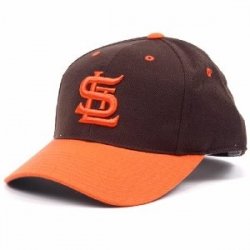 On Spring Training– “Burbank was still ‘small town’ during that time. The fans were warm and friendly. We lived in a motel close to the park, very convenient, and the weather was fabulous. Happy memories!”

On Manager Rogers Hornsby– “Mr. Hornsby was one of the greatest hitters who ever played and he thought that any player should be able to hit like he did. He played better than he managed. He had no sympathy for a player who didn’t produce, regardless of the circumstances.”

On MLB players – “Players’ attitudes were different in those days. It was a thrill to meet those great players and to be on the field with them. Joe DiMaggio was always a gentleman, on and off the field. I wanted to be like him. Just to walk out in Yankee Stadium was a thrill. To get a hit off Raschi or Reynolds made my day.”

On Manager Rogers Hornsby– “It was the worst time of my baseball career.”

On Owner Bill Veeck– “He was great to us. Excellent relationship.”

On Spring Training– “We had some exciting rides to and from the ballpark and hotel.” 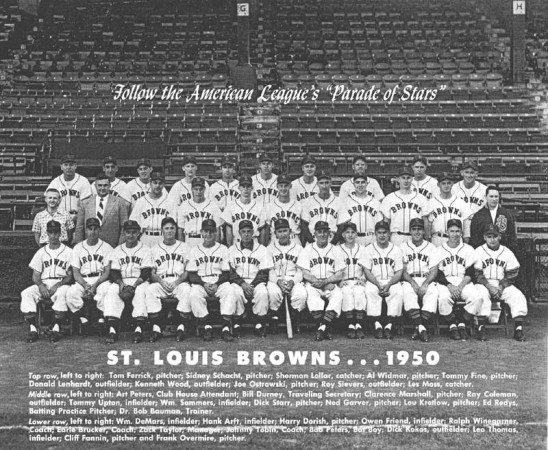 On Spring Training– “I had some great springs there. A great hitting park. It was a great area to train in plus the city itself was great to the players.”

On Spring Training– “I got to meet some movie stars- Bing Crosby came in the clubhouse and I got a picture with him. The Browns team was introduced on the Graucho Marx TV show.”

On Manager Rogers Hornsby– “Did not seem to have many friends. At least a few showed up. Baseball’s greatest right hand hitter and no friends – very sad. Very strange atmosphere. Not conducive to players being able to perform at their best.”

On the Cardinals– “Just enjoyed getting to play against Musial, Slaughter, Moore, Marion, etc.”

On Spring Training– “Always remember how Satchel Paige would try to hide behind the left field wall from Rogers Hornsby.”

On Eddie ‘the midget’ Gaedel’s funeral– “My wife, Judy, and I were the only ones from baseball at his funeral. Enclosed is the article about us at the funeral and a card showing me pitching to the midget.”

We conclude our special feature on the St. Louis Browns with some interesting facts.

Weighing 65 pounds and wearing #1/8 (one-eighth), Gaedel stepped to the plate as a pinch-hitter in the first inning of the second game of a doubleheader vs. the Detroit Tigers.

Facing future Browns pitcher Bob Cain, Gaedel took four balls and walked to first base. He was removed for a pinch runner and Gaedel never played major league baseball again. It was the most memorable moment in St. Louis Browns history.