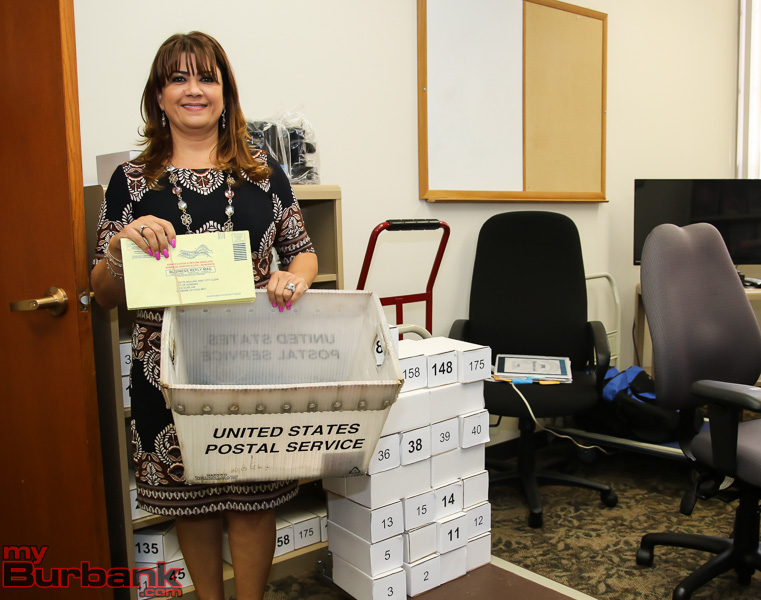 Even though the election was held Tuesday, Burbank’s all-mail election results were not finalized until Friday afternoon.  Because of a new California law requiring all ballots in mail-in elections be counted that are postmarked by election day, close to 1,000 ballots came in after Tuesday’s first count.

That count had both current Councilmen Bob Frutos and Jess Talamantes elected with both over 50% over the count of total ballots.  However, the additional days and ballots brought Frutos under the 50% threshold forcing him into the General Election to be held April 11. This will also be an all mail election.

Burbank City Clerk, Zizette Mullins, announced that final results for Burbank’s Primary Nominating Election. Of the 66,711 eligible voters, 10,902 ballots were cast (10,190 ballots were cast in the 2015 Primary), representing a 16.34 percent return rate. With all ballots verified and counted including the mail received on March the 3rd at noon and the ballots that were pending verification by the Los Angeles County Registrar/Recorder’s Office. 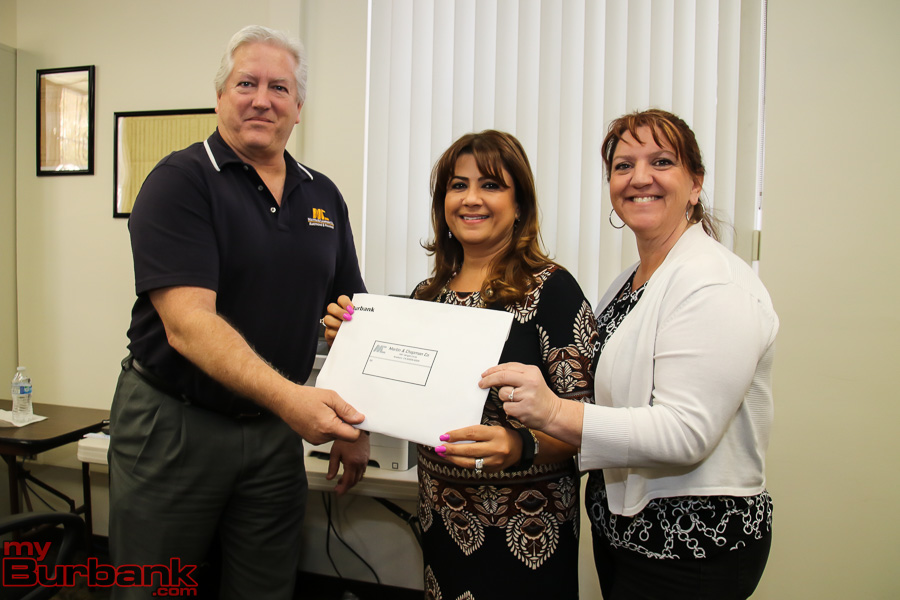 There were eight candidates who qualified for the ballot for the three City Council seats (in ballot order):

Talamantes received a majority of the votes cast and therefore is duly elected to office for a full term of four years, ending April 30, 2021.

There was one candidate who qualified for the ballot for the City Clerk seat (in ballot order): Current City Clerk Zizette Mullins (7,946 votes) and City Treasurer Debbie Kukta (7,972 votes) both ran unopposed and were re-elected

Three candidates ran for two Board of Education seats (in ballot order): Steven Frintner (5,745 votes), Charlene “Char” Tabet (5,510 votes), and Larry Applebaum (5,398 votes). Frintner and Tabet received a majority of the votes cast and were elected to office for a full term of four years, ending April 30, 2021.

As of Wednesday afternoon, there is still a question as to the re-election of two Burbank City Council members.

Because it is an all-mail vote conducted by the City of Burbank, results can not be posted yet because ballots that have postmarks up until election day have still not been received or counted. 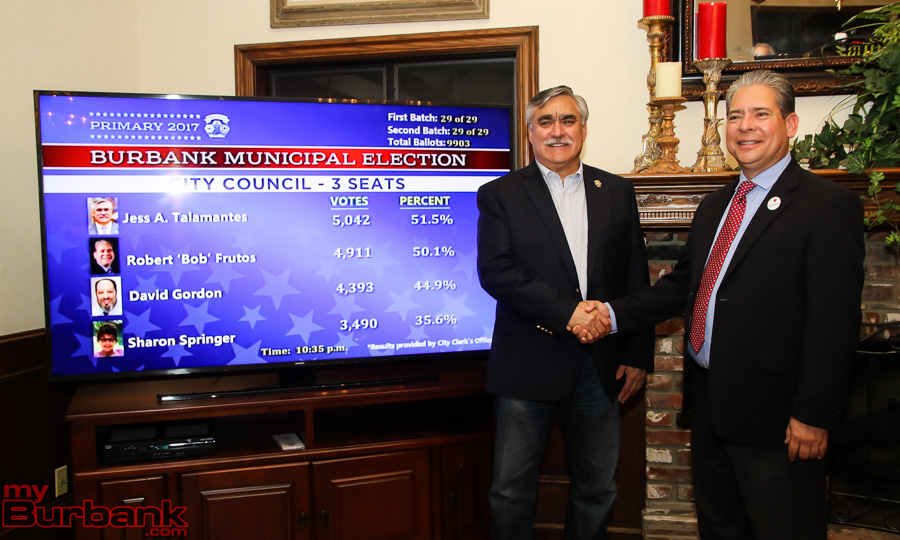 Jess Talamantes and Bob Frutos congratulate each other after early numbers show that both have been re-elected to their City Council seats (Photo by © Ross A. Benson)

With only 9,903 total ballots counted that were submitted by Burbank’s electorate and processed as of Tuesday night at 10:35 pm, all of the open seats may have been decided except for one.

Burbank’s City Council had three seats up for grab with all three incumbents, Dr. David Gordon, Bob Frutos and Jess Talamantes, running to retain their places on the council for the next four years.

Talamantes is currently ahead with 5,042 votes (51.5%) while Frutos placed a close second with 4,911 votes (50.1%). Both may be elected without facing a runoff due to the formula of a candidate receiving 50% of the votes cast plus one vote to avoid a runoff.

On the other hand Gordon, who ran on an anti-development platform, only received 4,393 votes (44.9%) and could possibly face fourth place finisher Sharon Springer who captured 3,490 votes (35.6%) who worked the community through a grassroots effort.  If either Frutos or Talamantes do not capture over 50% with the final tally, they will also face the runoff.

On the School Board, both incumbents, Charlene Tabet and Larry Applebaum were up for re-election along with longtime PTA activist  Steve Frintner for the two open seats. Because there were two seats open with only three candidates, the top two vote getters were automatically elected with no runoff needed. 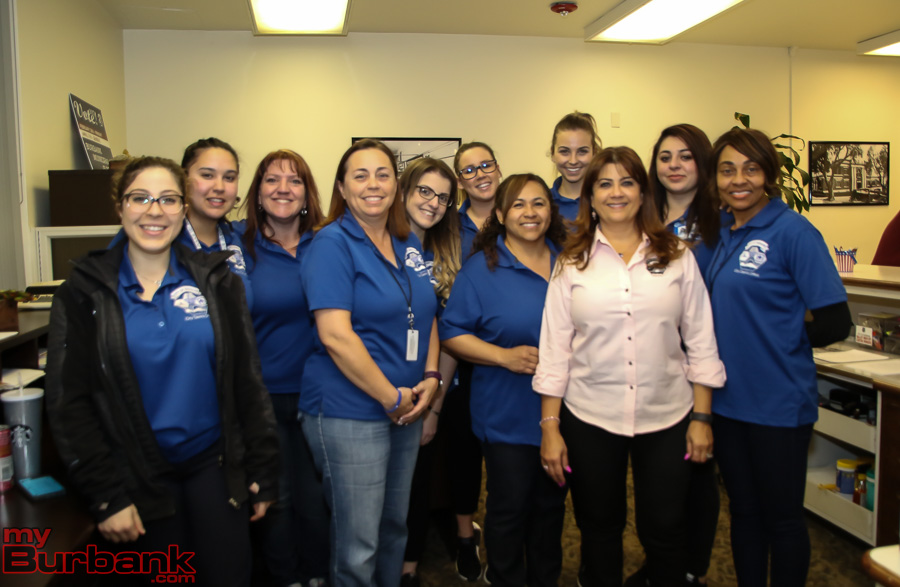 Members of the City Clerk’s office worked on results most of the night (Photo by © Ross A. Benson)

If the current vote holds and results do not change, Gordon and Springer will now face off in the General Election which is scheduled for April 11. It will also be an all-mail election.

The winning candidates will assume their new positions May 1.

The following press release was received from the candidates election committee:

The Burbank Police Officers’ Association recently endorsed City Councilmember Bob Frutos for re-election to his seat in the February 28, 2017 election.

“This endorsement has been made because of Mr. Frutos current record on many issues of importance to our officers and the citizens of Burbank, as well as the general public and his excellent leadership performance.  We are proud to be one of Bob Frutos supporters and look forward to his service to the Citizens of Burbank.”  Lieutenant Jay Hawver, President Burbank Police Officer’s Association.

“It is an honor to have received the endorsement from the Burbank Police Officers’ Association.   As a retired Police Officer, this endorsement is very important to me as I understand and I value the hard work and commitment of the men and women of the Burbank Police Department.  I thank the BPAO for their support and I will continue to serve proudly and diligently to make a positive and lasting difference in our community”.  Bob Frutos said.

The City Clerk’s Office announced that a random drawing was conducted at the Candidate Orientation meeting on Thursday, December 15, 2016, to select the following Ballot Order for candidates for the 2017 Primary Nominating Election. The election will be conducted on Tuesday, February 28, 2017, to fill three (3) City Council, one (1) City Clerk, one (1) City Treasurer and two (2) Board of Education seats.

Board of Education (2 Seats)

Editor’s Note: myBurbank will run all press releases without editing or censorship from all candidates for election in the February, 2017 election. myBurbank will print responses to a questionnaire that will be sent to all candidates about their views and opinions in January before making endorsements at the beginning of February.

The following is a press release supplied by the candidate:

Burbank City Councilmember Bob Frutos will seek re-election to his seat in the February 28, 2017 election.

Elected in 2013, Bob expressed great appreciation for the opportunity to serve on the Council, and reiterated his promise to continue “working tirelessly for our city and all its residents and neighborhoods.”

Noting his strong support among numerous residents from ever part of Burbank and Community Leaders, Councilmember Frutos said, “I am committed to continuing to make a positive and lasting difference in our community.”

During the past four years, Councilmember Frutos has brought in new ideas and a fresh perspective to local government, while maintaining his professionalism and a steady demeanor. “I believe in order to have a functional and effective council; members have to be able to work cohesively in order to accomplish good and necessary things for the residents of Burbank.”

Councilmember Frutos and his family have been residents of Burbank for 24 years.  He retired from the Los Angeles Police Department after 29 years of service