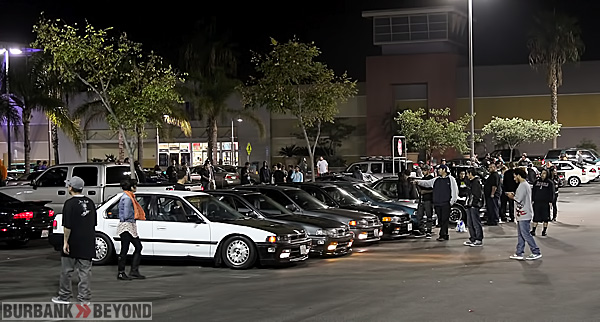 Thousands of car enthusiasts from the group Krispy Kreme Tuesdays invade The Empire Center again. (Photo by Ross A. Benson)

Burbank Police had their hands full after several thousand car enthusiasts, known as “Krispy Kreme Tuesdays,” showed up to a monthly car gathering at  The Empire Center.  They needed  assistance from Glendale Police, Los Angeles Police Department, and even the California Highway Patrol. 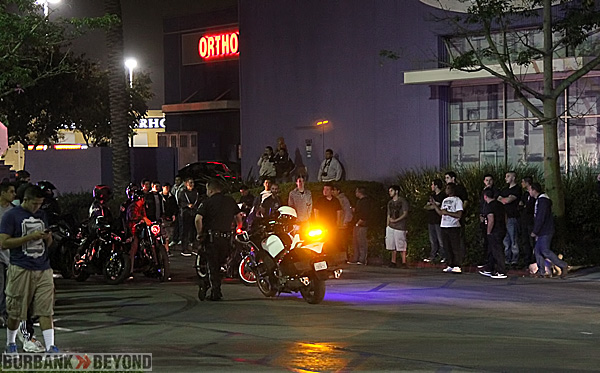 Glendale Police stop several motorcyclist that were racing, and in violation of several vehicle code infractions. (Photo by Ross A. Benson)

Shortly after 7 p.m., the crowd (which advertises their outing through a Facebook page) grew.   Burbank Police set up a command post nearby, which included gang enforcement officers.  Glendale Police motorcycle officers had to close the streets leading to the center.  A police helicopter was used to aid in the effort.  Several pockets of people gathered and police units moved in to disperse them.

Cars leaving the center caused traffic on local streets to became totally packed.  Police then found the cars leaving had gone up to the Kmart parking lot and Carl’s Jr. on San Fernando Blvd.  After police moved them from those parking lots, the groups of cars  wound up at the In & Out parking lot on First St., and Ralph’s parking lot on Buena Vista St. and Victory Blvd.

The area finally returned to normal around midnight, after  several drivers were cited and one motorcycle was even impounded. 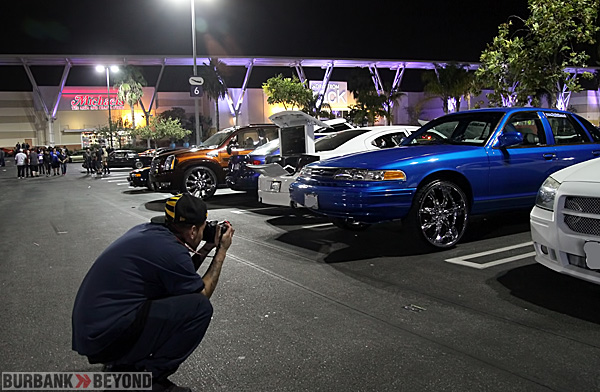 Cars were photographed, videoed, looked at, smiled at, and admired. (Photo by Ross A. Benson)

The Burbank Police Department had heard that there was going to be some type of a car show gathering near the Empire Center Tuesday evening, and a kind of “Flash-Mob” of kids and cars is what turned out. 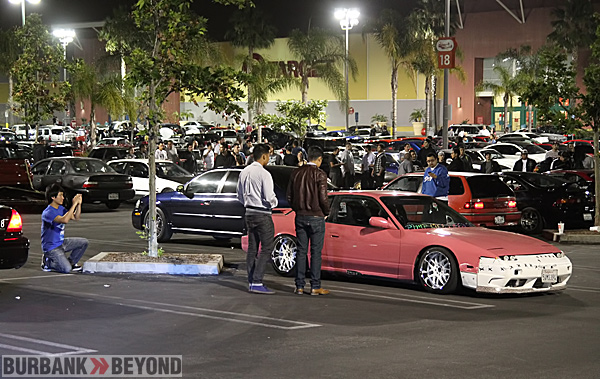 Cars, truck and even a pink car were on display. (Photo by Ross A. Benson)

Reportedly over one thousand cars and young adults and teens filled every feasible parking spot, with more in the aisles and on foot.  At one point police officers who were on scene, felt it was necessary to shut down all the roadways leading  into The Empire Center.   They requested assistance from  Glendale Police for traffic control.  Officers closed Victory Pl. at Burbank Blvd.,  Lake St. at Victorry Pl., and other streets near the shopping center until they could get a handle on the situation.

They had officers on foot, motorcycles, and even a K-9 unit patrolling the parking in case any trouble arose from the basically peaceful crowd.  Several cars and drivers were cited, but the police were more interested in keeping things under control with the large crowd present. . 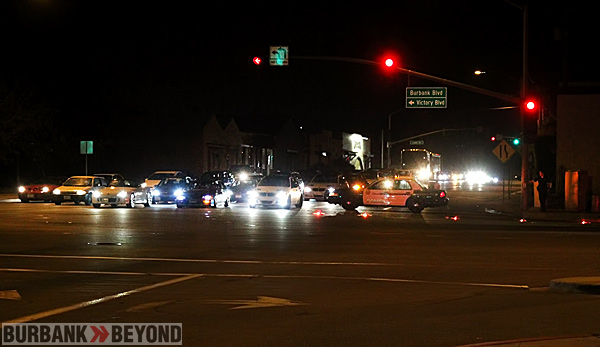 With the assistance of Glendale Police the streets leading to the Empire Center was closed. (Photo by Ross A. Benson) 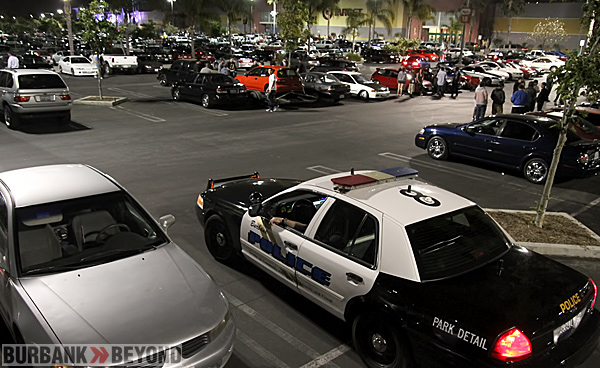 Thousands of teens and young adults and their cars showed up at The Empire Center Tuesday night for a social gathering, after several social media outlets put out that this was the place to be. (Photo by Ross A. Benson)

Burbank’s City Council took up the Walmart issue on Tuesday night to a packed Council Chamber and many questions went unanswered.  The question will be brought up again at the February 21 meeting.  Expect residents who object to the project as well as Walmart supporters to be back in force again.  One of the big questions that went unanswered is Walmart a grocery store and what percentage of the store will be dedicated to selling groceries. 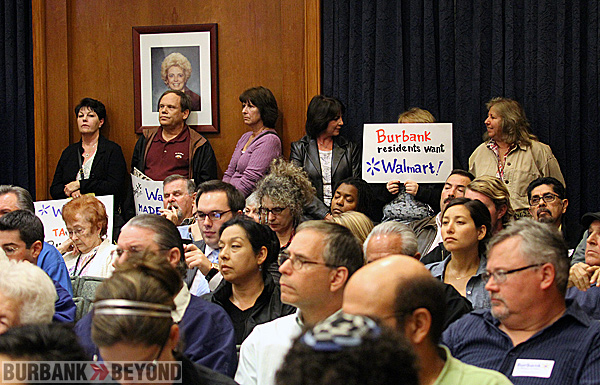 Burbank City Council Chambers were packed with those for and those against Walmat, staff was instructed to come back with more information for the Councilmembers. (Photo by Ross A. Benson)

During the months of November and December, the Burbank Police Department conducted four undercover “Holiday Crime Suppression Operations” in the area of the mall, the village, and the Empire Center. The operations were established in order to target thefts from vehicles during the holiday shopping season.

During an operation that was conducted Wednesday, December 28, the undercover officers observed what appeared to be a suspicious and illicit transaction take place in the Empire Center. Additional officers responded to their location, near Best Buy, and contacted the individuals. One of the individuals was there to sell a stolen, unbeknownst to the buyer, power drill that was arranged through an on-line advertisement. The suspect admitted that the drill was stolen. Burbank Police detectives placed the individual selling the stolen merchandise under arrest.

Detectives responded to the suspect’s residence in Los Angeles, where three additional stolen power tools, all brand new and in boxes, were recovered. Based on detectives’ preliminary investigations, it appears the drills were stolen from multiple Home Depots in the San Gabriel Valley.

The suspect, Julio Landeros, 24, from Los Angeles was arrested for 496(a) PC, Possession of Stolen Property, and an unrelated warrant. 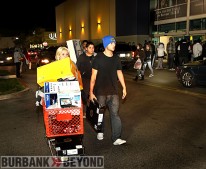 Customers filled their carts for Black Friday deals. (Photo by Ross A. Benson)

The Empire Center was buzzing at the strike of midnight as Black Friday officially began with well over 500 customers waiting in line to get into the Best Buy store, and another 500 to 700 people waiting to enter the Target Store.

The parking lots were filled to capacity.  Some of the customers had waited two or three days in tents and sleeping bags to be the first ones into Best Buy. Customers were seen walking out of Best Buy store with large flat screen TV’s, laptop computers, printers, stereo equipment, and just about anything else electronic. 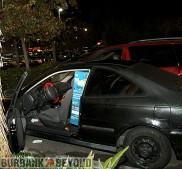 Buying was the easy part - trying to fit it in your car was a different matter on Black Friday. (Photo by Ross A. Benson)

Some people bought more than their cars could hold, like the customer who bought two 42″ flat screen displays.  He was trying to figure out how to get then both into his Honda, along with the three passengers he came with. 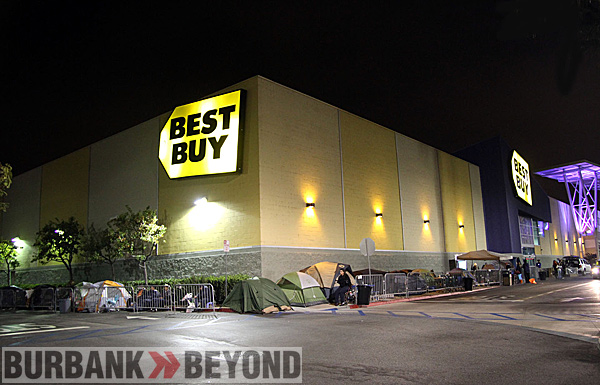 People camp out at Burbank Best Buy on Wednesday evening prior to Thanksgiving. (Photo by Ross A. Benson)