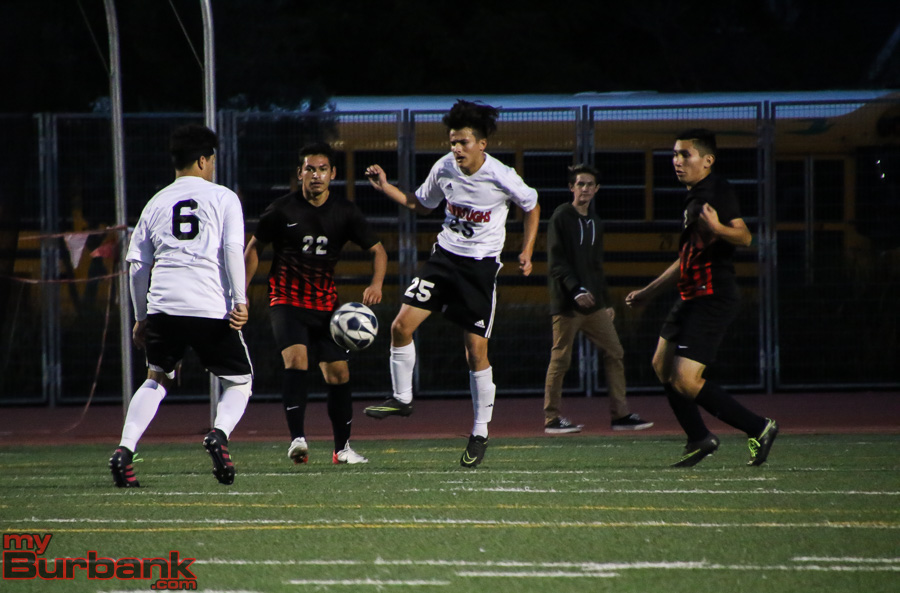 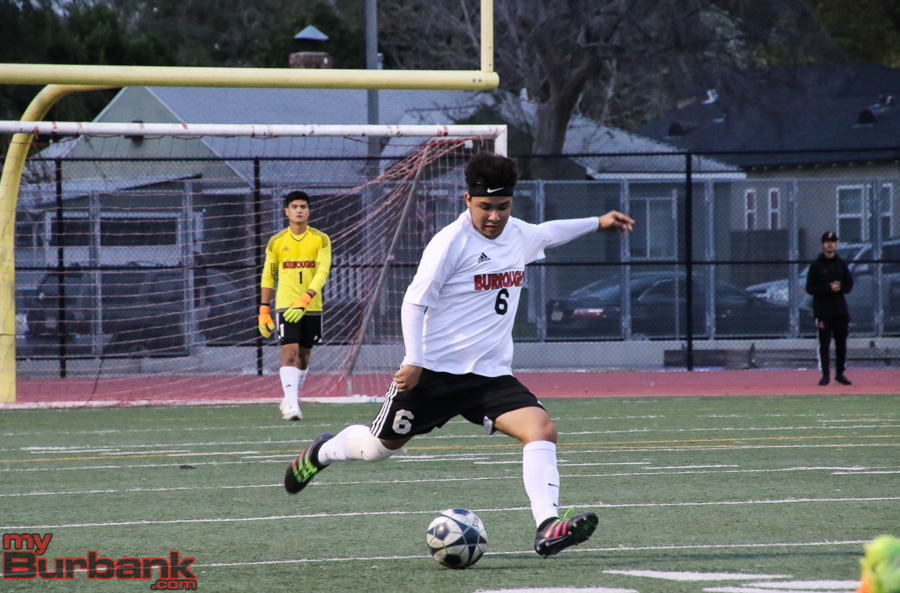 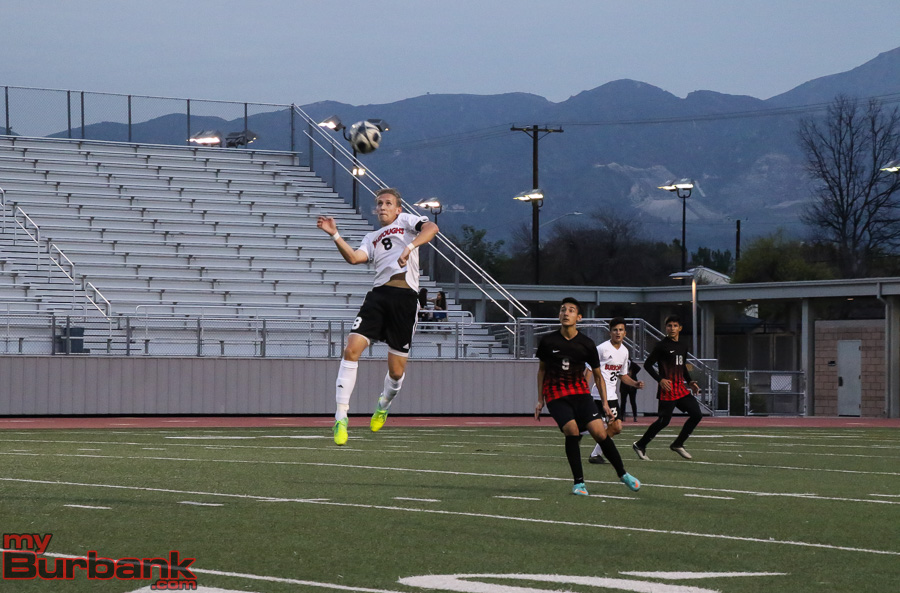 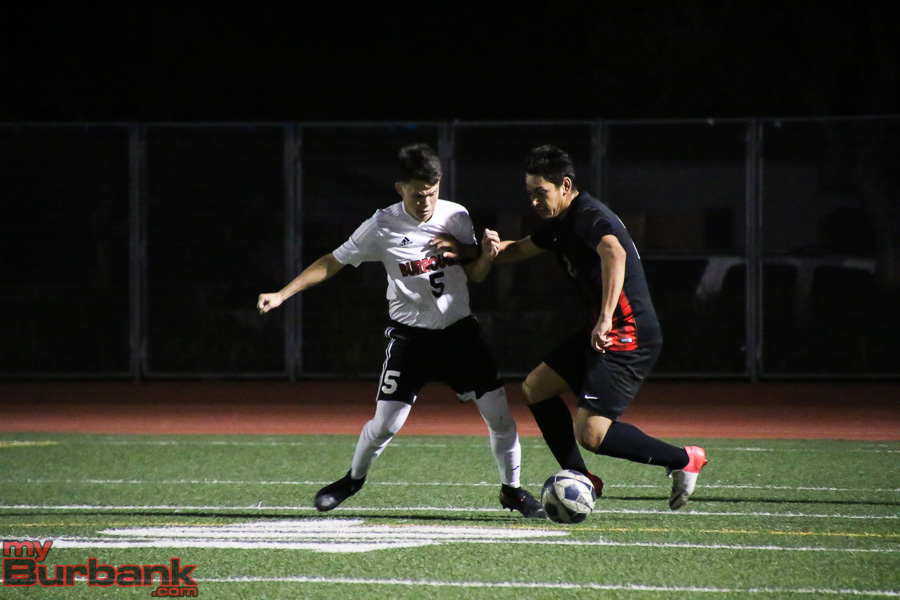 A tense Pacific League boys’ soccer match was expected and one was delivered when Burroughs High faced host Crescenta Valley on Tuesday.

When it was over each team scored a goal and with the 1-1 deadlock the Indians were assured of at least a share of the league title, something they’ve claimed in 2013 and 2014. 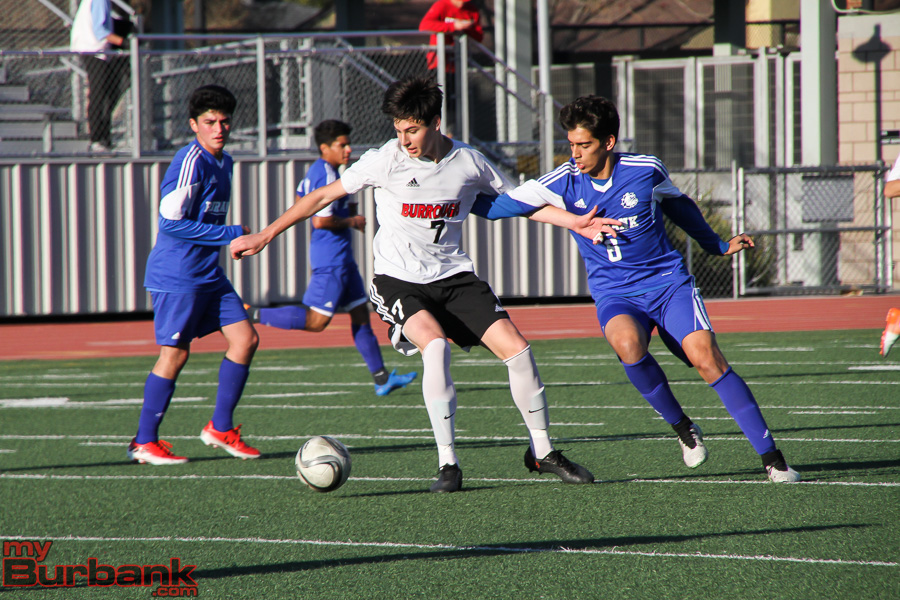 Senior midfielder Jake Lasso (#7), shown against Burbank, is a goal-scoring machine, but failed to find the net in a 1-1 tie with CV. (Photo by © Ross A. Benson)

“Winning the league title is important for us,” Burroughs coach Michael Kodama said. “These are the two best teams in the league. You knew that it was going to come down to one play.”

After a scoreless opening half, the Falcons’ junior defender Tomik Baghramian kicked one into the net from five yards in the 49th minute past senior goalie Jordan Morgan, who came in with six shutouts, to make it 1-0.

The tying tally was supplied by senior defender Richard Alonzo on a header after a free kick in the 68th minute that escaped senior goalie Luis Flores.

“We trust each other,” said Alonzo, who missed the first half of league action after spraining his knee in a tournament versus Birmingham. “We never give up because we know it only takes a second to score. The game’s not over until the end.” 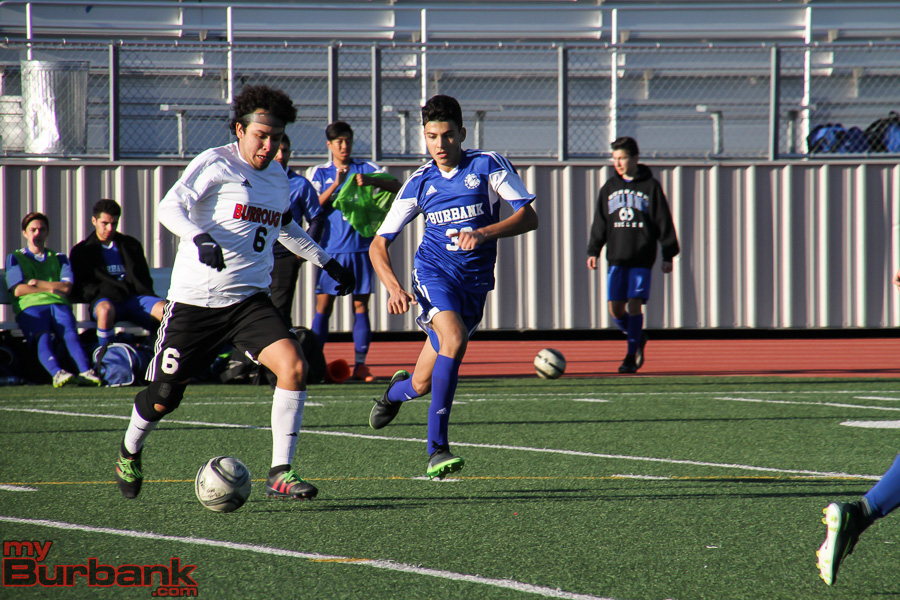 Richard Alonzo (#6), pictured against the Bulldogs, had a late tally that tied the match 1-1 versus the Falcons. (Photo by © Ross A. Benson)

The first shot on goal came in the seventh minute by Burroughs senior forward Anton Prather from 10 yards.

In the 19th minute, Burroughs senior forward William Rosales had a shot on goal from 20 yards while teammate senior defender Erik Camarillo’s 20-yarder came in the 20th minute.

Crescenta Valley’s senior midfielder Anthony Dehnoushi’s 30-yard shot on goal in the 22nd minute missed, as did senior forward Henry Barkhordarian’s 20-yarder in the 23rd minute and Bakunowski’s 30-yarder in the 26th minute.

Burroughs senior midfielder Jake Lasso, who has scored 15 goals and entered the match having tallied seven with an assist over the last five matches, had a shot on goal from 20 yards in the 31st minute, while Prather’s 15-yard header in the 42nd minute also didn’t find the back of the net. 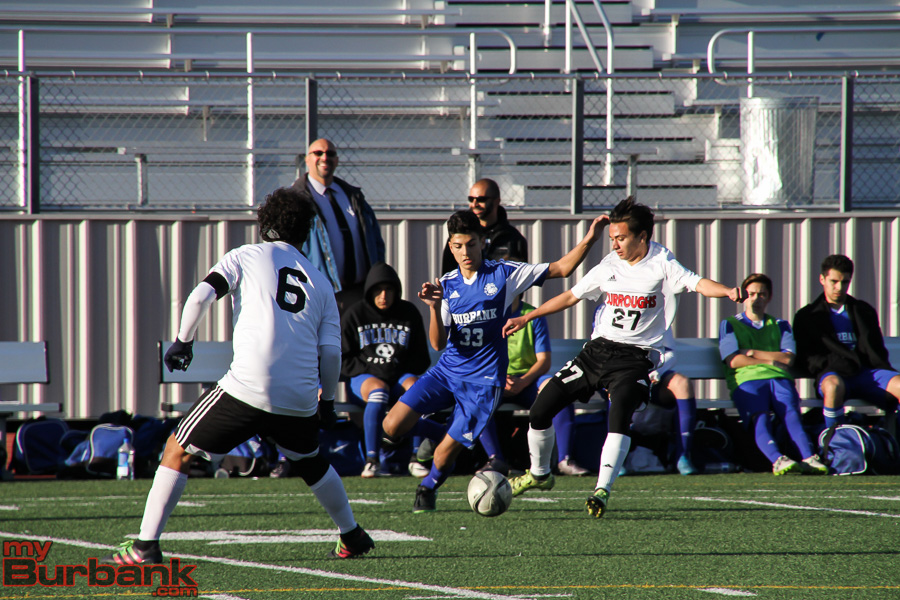 The Indians kept the defensive pressure on CV all day long. Alonzo (#6), shown in a recent match, was especially effective. (Photo by © Ross A. Benson)

In the 34th minute, Bakunowski had a shot on goal from 25 yards and junior midfielder Kyle Quesada had a header from 10 yards in the 36th minute for the Falcons.

The second half opened with Baghramian’s header from 10 yards in the 42nd minute.

Rosales had a shot on goal from 10 yards in the 52nd minute and Atanackovic’s 10-yard header came in the 55th minute.

Camarillo’s 25-yard shot on goal in the 59th minute was countered by Kaauwai’s five-yarder in the 60th minute.

Barkhordarian’s 10-yarder was registered in the 63rd minute while Lasso’s 25-yard shot on goal came in the 64th minute.

A 15-yard shot on goal by Burroughs senior midfielder Cameron Kelly was struck in the 70th minute and Lasso’s 25-yarder followed a minute later.

Camarillo’s header from 10 yards in the 72nd minute was offset by a 10-yarder from Dehnoushi in the 73rd minute.

Prather’s header from 10 yards during injury time was the final shot on goal.

Defensive organization is the key to winning a championship in any sport.

The Burroughs High boys’ soccer team has shown early in the season that it is well composed in the back.

That has led the Indians to the final of the Ralph Brandt Tournament following a 3-1 win over Royal High of Simi Valley in Saturday’s semifinal at Memorial Field.

Burroughs will play Birmingham of Lake Balboa Monday night at 7 p.m. at St. Francis High in La Canada for the tournament title.

“That whole group, we’re talking about a group of seniors all in the back from the goalkeeper to all the defenders,” Burroughs coach Mike Kodama said. “It is a big difference.”

The Indians feature goalie Jordan Morgan, as well as center backs Josh Sanchez and Richard Alonzo along with left back Diego Galaviz were all solid and have had a huge assist from defensive midfielder Cameron Kelly, who wins many loose balls and yet can still get the offense started. 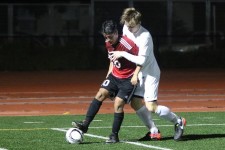 “My role is to stay as aggressive as I can and fight for every single ball in the air and every ball on the ground,” Kelly said.

Burroughs got on the board in just the second minute as Anton Prather finished off a Jake Lasso-Spell pass that came from a free kick.

Lasso-Spell doubled Burroughs’ lead in the 9th minute when he headed in a free kick from Erik Camarillo.

The Indians continued to dominate Royal and struck for a third time right before halftime.

William Rosales made a fine run on the left side and crossed the ball to Andrew Bardales, who headed the ball off the hands of Royal goalie Nick Lapinid. 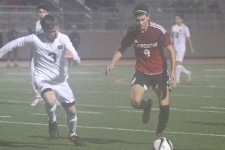 Ari Arango cleaned up the loose ball by putting it into the net.

“It is all about being first to the ball,” Kodama said.

Leading 3-0, Burroughs wasn’t as strong in the second half as it was in the first half. However, the Indians did well enough to allow Royal to sneak just one goal past Morgan.

In the quarterfinals Burroughs outlasted Sherman Oaks Notre Dame in penalties after the match ended in a 1-1 draw. Burroughs made all five of its penalty kicks and Notre Dame wasn’t far behind, making four of its five shots.

Notre Dame got on the board in the 61st minute as Max Markel perfect placed a softly touched cross from Joao Gonzalez in the left corner past Burroughs’ goalie Morgan. 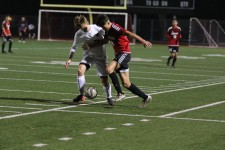 Burroughs came by five minutes later and tied things in the 66th minute as Rosales scored on a left-footed shot following a pass from Lasso-Spell.

The Indians clinched the victory when Morgan made a foot save on Notre Dame’s fifth and final penalty kick.