A Burbank woman was killed and her son and daughter-in-law were injured as their house was consumed in flames Saturday night in Burbank. 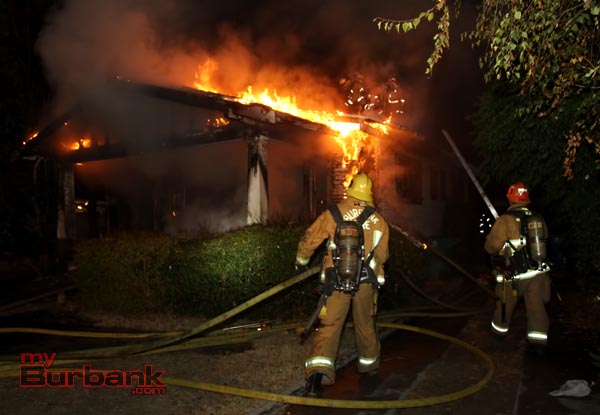 Burbank Firefighters getting control of the house fire that claimed the life of a Burbank woman Saturday night. (Photo by Ross A. Benson)

Units from the Burbank Fire Department were dispatched at 9:21 p.m. Saturday  to a report of a house fire at 910 N.  Evergreen St. (between Magnolia Blvd. and Clark Ave.) in Burbank with the possibility of someone trapped inside.  On their way to the call, Engine 12 reported that smoke was already visible from several blocks away.

As they arrived on scene firemen reported that the house was already completely involved if flames to the front of the residence.  Firefighters immediately went inside to try and rescue anyone still trapped.   Battling flames and thick smoke that filled the inside of the home, firefighters eventually found a woman inside near the back porch of the home.  The woman, in her 70’s, was in full cardiac arrest when she was found. They brought her out into the front yard of the home where paramedics were waiting to administer CPR. 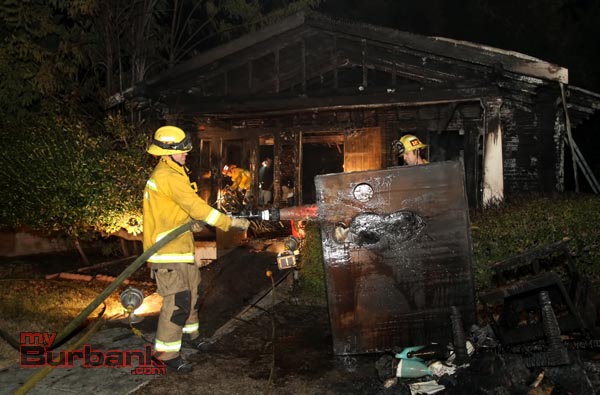 Burbank Firefighters wet down some the remains of some furniture that was removed from the living room of the burned house.(Photo by Ross A. Benson)

Paramedics rushed the victim to Providence St. Joseph’s Medical Center where she was pronounced dead.  Both her son and daughter-in-law received non life-threatening injuries and were also transported to he hospital.  The status of their condition was not available. The names of he victims have not been released. Burbank Animal Control was also called to the scene for a deceased dog.

Three engines, two trucks and a paramedic squad extinguished the flames in about 20 minutes.  There was no immediate estimate of the damage to the structure or contents, but the damage to the house appeared to be quite extensive.

Fire Investigators from both Burbank and Pasadena  was called to the scene as well as Burbank Police detectives.  The cause of the fire has still not been determined at this time.

Note: Ross A Benson and Stan Lynch contributed to this story. 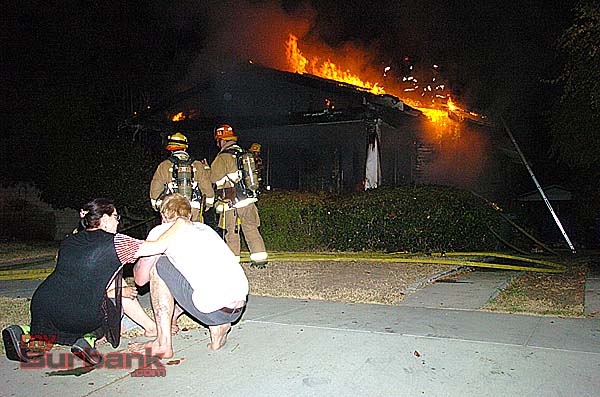 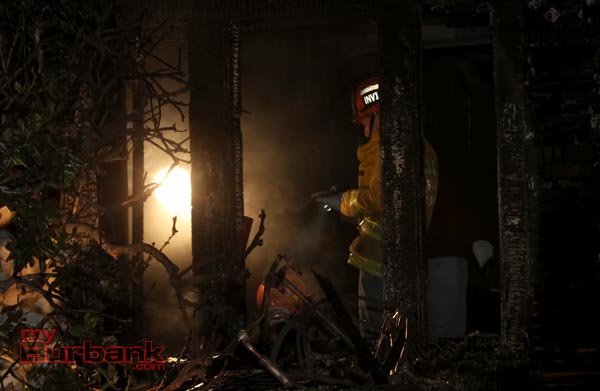 Fire Investigators from Burbank and Pasadena look for the cause of the fire at 910 Evergreen Street. (Photo by Ross A. Benson) 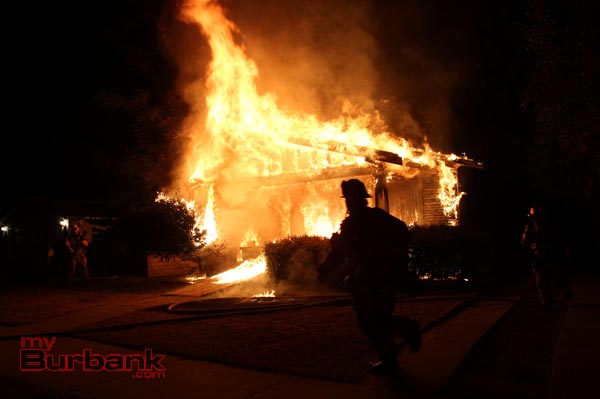 Burbank Firefighters prepare to extinguish the flames that consumed to front of the house at 910 N. Evergreen Street Saturday evening. (© 2013 Ross A. Benson)