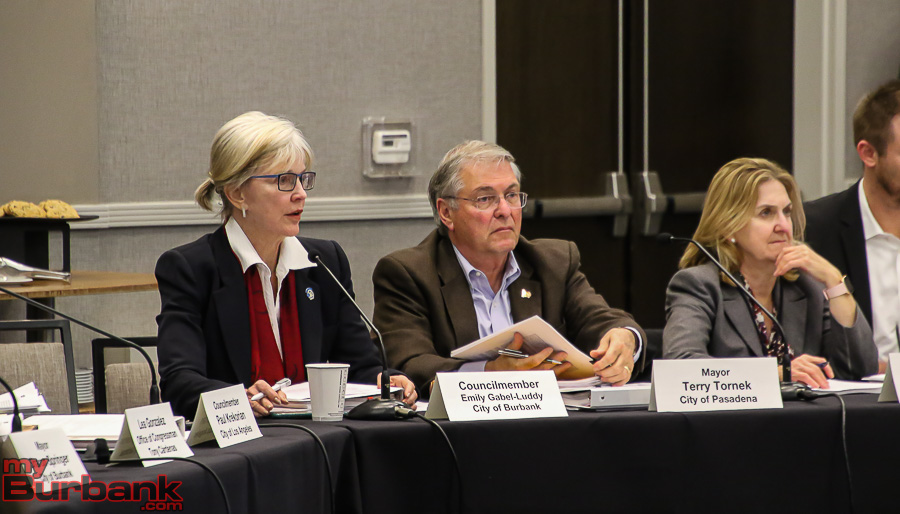 Groups representing Burbank and several southern Valley communities gave presentations and asked questions of the elected officials and FAA representatives. During their presentations suggestions and requests to solve the noise problem were made. Burbank Mayor Sharon Springer and Councilwoman Emily Gabel-Luddy were in attendance. 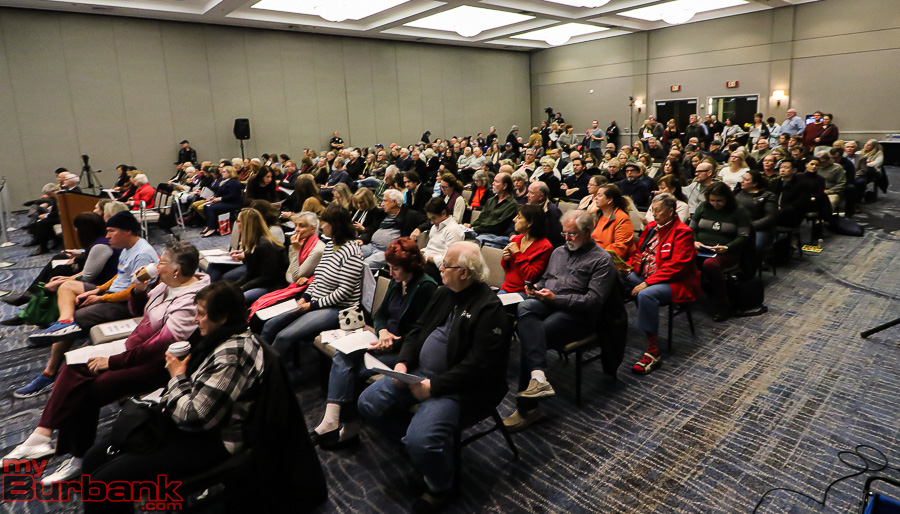 Quiet Burbank Skies gave a detailed study showing the increase of flights in recent years from Burbank airport. Burbank citizens complained of loud daily jet noise—sometimes as extreme as 80 to 100 decibels—jets flying at low altitudes which increased their noise loudness while passing overhead and noise from flights taking off as late as 3am waking residents. According to the study Burbank airport has not been enforcing its own noise regulations or after curfew take off rules. The last flight allowed to be scheduled at Burbank airport is 10 p.m. 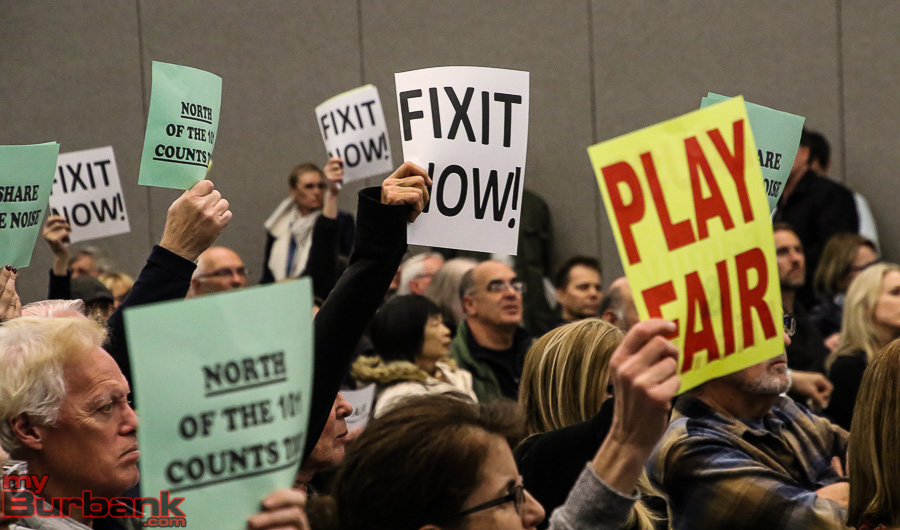 “It’s just noisy all the time,” said Judith Fraser who lives in Laurel Canyon. “We have had noise but not like this. This is really sever. It seems like they are flying lower…more flights and lower.”

Quiet Burbank Skies claimed the extreme jet noise started after the Next Generation Air Transportation System, called NexGen, was implemented in 2017.  NextGen, a satellite-based navigation system was created to make flights safer, quieter, and more efficient. The city of Los Angeles sued the FAA in Dec. 2019 because of plane noise over the San Fernando Valley and the FAA’s lack of action. The suit asks that the FAA return flights to pre-NextGen routes.

Planes taking off at a higher altitude, making their turns over the Valley sooner, Burbank airport imposing fines for violations of noise and after curfew plane take offs and returning to pre-NextGen flight routes were all solutions given by the community groups.

Questions asked to the FAA’s representatives by elected officials and residents were not answered. The agency replied they could not answer questions due to the litigation with Los Angeles. The refusal to provide any information frustrated and angered the meeting’s audience members some of who were holding up signs reading Fix it Now, Play Fair and Liar.

The panel of elected officials and representatives said no action would be considered until the series of task force meetings was finished. The final airport task force meeting will be held Feb. 19 at the Los Angles Marriott Burbank Airport hotel.

L. A. City Attorney Mike Feuer has sent two letters to the FAA.

One to the Western-Pacific Regional Administrator, Raquel Girvin, demanding that the FAA direct the tower to tell flights to stay within the route used before ‘NextGen’ was implemented.

The second letter was sent to the FAA Operations Support Group in Washington State that the FAA prepare an environmental assessment before aircraft resume the new routes.

The has been no comment from either the City of Burbank or the Burbank Glendale Pasadena Airport Commission as of this time.

Rep. Adam Schiff Updates Burbank on FAA Furloughs Following the Senate’s vote to end FAA air traffic controller furloughs on Thursday, the House jumped in and passed legislation to fund the country’s air transportation system – at least until the end of this fiscal year. Having passed both chambers, the bill is on its way to President Obama to sign and become law.

Air travel in the United States, including LAX and Burbank Airport, were all directly impacted by the furloughs, most notable in departure and arrival delays. myBurbank asked Representative Adam Schiff (D) from California’s 28th District to give his thoughts on sequester, furloughs, and his efforts to bring the problem to a close.

It’s my continued hope that Congress will take steps this year to void the sequester entirely in favor of a more sensible plan of deficit reduction, but if this cannot be accomplished we should do everything possible to save programs that work, keep us safe and keep our economy running.

The elimination of air traffic controllers across the nation, including at LAX and Burbank, was beginning to cause flight disruptions and delays, and impacting commerce in a way that would further injure our economy. That’s why I voted today for legislation allowing the Federal Aviation Administration (FAA) to prevent staffing shortages that have caused delays in the aviation system.

But today’s vote does nothing to stop other equally damaging cuts due to sequestration – including Head Start, seniors losing their “Meals on Wheels,” loss of housing assistance causing families to be evicted from their homes, and the prospect of justice delayed in our federal courts.

It’s imperative that we replace the sequester with a balanced package that will actually grow the economy and reduce the long-term deficit, and stop these continual band-aid solutions.

You can contact Rep. Schiff and learn more of his positions and activities at his website, schiff.house.gov

The Los Angeles Residential Helicopter Noise Relief Act would establish regulations on flight paths and minimum altitudes for helicopter operations in Los Angeles County. Feinstein and Schiff hope that the legislation will prompt the FAA to act, and if passed, will require the agency to finally address numerous resident complaints. They were joined by other Los Angeles congressional colleagues, including Congressmen Henry Waxman (D-Calif.) and Brad Sherman (D-Calif.).

“Los Angeles area residents living in Glendale, Pasadena, the Valley, the Hollywood Hills, West Hollywood and other areas are especially affected by intrusive, disruptive and often non-emergency related helicopter traffic above their neighborhoods,” said Congressman Schiff. “The terrain of canyons around the Rose Bowl concentrates low-flying helicopter noise to high levels, and Hollywood Hills and West Hollywood residents frequently suffer from noise generated by celebrity news media that follow stars to the beach, the grocery store, or for court appearances. The residents in these areas deserve peace and quiet, and if the FAA won’t act, Congress must pass this legislation to give residents the relief they need.”

“LA County residents suffer from high levels of disruptive, low-flying helicopter traffic over their neighborhoods. This bill would address that problem by requiring the FAA to create regulations for how helicopters operate in the skies above Los Angeles,” said Senator Feinstein. “In addition to reducing noise, this bill would increase safety and minimize commercial aircraft delays while exempting first responders and military aircraft from its limitations. I look forward to working with Congressman Schiff and Senator Boxer to get this bill passed.

“This legislation will ensure that the FAA sets responsible guidelines that allow helicopters to continue to operate above Los Angeles while protecting residents from excessive noise associated with low-altitude flights,” said Senator Boxer.

“I hear complaints about helicopter noise from every part of the 33rd District—from Malibu to Brentwood to Benedict Canyon,” said Congressman Waxman. “FAA regulation of the thunderous helicopter traffic over LA is long overdue.  And if the FAA won’t act, Congress must.”

“I am pleased to join my colleagues in introducing this legislation to urge the FAA to implement enforceable measures that provide meaningful more relief for Valley communities impacted by helicopter noise and to protect the safety of aircraft in the crowded skies above our metropolitan area,” said Congressman Sherman. “The active participation of the FAA, community leaders and the helicopter industry can also help lead to substantial progress in developing solutions to better balance public safety and relief from excessive helicopter noise.”

Last year, Schiff and Feinstein wrote to Department of Transportation Secretary Ray LaHood urging him to form a working group at the Federal Aviation Administration (FAA) to solicit input from local communities and stakeholders on helicopter noise and safety issues across Los Angeles County. For the past year, that working group has been meeting with local residents, stakeholders and officials to discuss ways to move forward and adequately address the concerns and complaints of affected residents.

Under the legislation sponsored by Schiff, Feinstein and Boxer, the FAA would be required to exercise its legal authority to set guidelines on flight paths and minimum altitudes for helicopter operators in residential areas in Los Angeles County within 12 months of being signed into law. Exemptions would be provided for law enforcement, emergency responders and the U.S. military.

“I’m heartened that Congressman Schiff and Senator Feinstein will be taking up the mantle of helicopter noise regulation next year. They have been steadfast partners with me on the LA Helicopter Noise Relief Act,” said former Congressman Howard Berman. “Los Angeles County residents should know that they will have an important voice in Washington who will continue to fight for common sense reforms to protect their safety and quality of life from intrusive helicopter flights.”

“While I appreciate the FAA’s willingness to engage residents and hear their concerns directly, it is plain that voluntary actions will not be sufficient to address the real quality of life and safety issues raised by these persistent fly-overs,” said Rep. Schiff.  “Residents living throughout Los Angeles are deeply impacted by the intrusive, disruptive and often non-emergency related helicopter traffic above their homes and neighborhoods. The canyons and mountains across our region concentrate the low-flying helicopter noise to extremely high levels. Add to that the problem of tourist and press helicopters tracking celebrities in the Hollywood Hills and West Hollywood or perusing the Rose Bowl, and you have a significant impact on the quality of life of thousands of constituents. The residents in these areas deserve peace and quiet, and I will be taking up the legislation shepherded by Congressman Berman in the new session of Congress.”

After the meeting, Schiff announced he will re-introduce the Los Angeles Helicopter Noise Relief Act.  This bill requires the FAA to exercise its legal authority to regulate helicopter operations above Los Angeles within 12 months of being signed into law. Specifically, the bill calls on the Administrator of the FAA to set guidelines on flight paths and minimum altitudes for helicopter operators in residential areas of Los Angeles County. Exemptions would be allowed for law enforcement, emergency responders, and the US military.

“I’m heartened that Congressman Schiff will be taking up the mantle of helicopter noise regulation next year. He has been a steadfast partner with me on the LA Helicopter Noise Relief Act,” said Rep. Howard Berman. “Los Angeles County residents should know that they will have an important voice in Washington who will continue to fight for common sense reforms to protect their safety and quality of life from intrusive helicopter flights.”