Get a head start on your holiday shopping!

The Burbank Campus Parents’ Association of the International School of Los Angeles is proud to present their 3rd annual French Holiday Bazaar on Friday, December 6 from 3:00pm-9:00pm. Featuring over 30 vendors and artists, plus gourmet French food and festive drinks, the Bazaar is the perfect place to start (and maybe even finish!) your holiday shopping.

Admission is free! Simply RSVP for free via Eventbrite (https://french-holiday-bazaar.eventbrite.com/) to join us for a merry evening of shopping and more!

Saturday-Sunday June 8-9 will feature free samples right outside the shop entrance during business hours which are Tuesday-Saturday 10am-8pm, Sunday 12n-7pm.

Saturday-Sunday June 8-9 will feature free samples right outside the shop entrance during business hours which are Tuesday-Saturday 10am-8pm, Sunday 12n-7pm.

Get a head start on your holiday shopping!

The Burbank Campus Parents’ Association of the International School of Los Angeles / Lycée International is proud to present their 2nd annual French Holiday Bazaar on Friday, November 16. Featuring over 30 vendors and artists, plus gourmet French food and festive drinks, the bazaar is the perfect place to start (and maybe even finish!) your holiday shopping.

Admission is free and no tickets are necessary. Simply RSVP for free via Eventbrite to join us for a merry evening of shopping and more!

The Burbank On Parade Committee announced today that for the first time it is expanding to a daylong celebration featuring several interactive events for the whole family on Saturday, April 23. 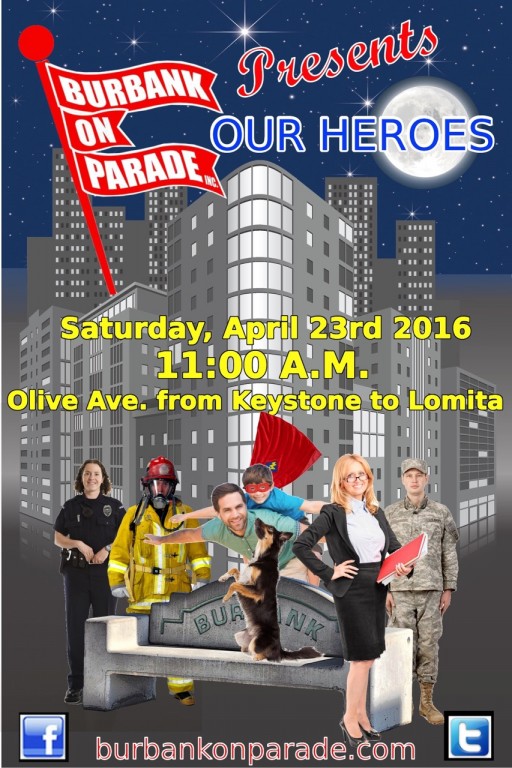 Titled “Burbank On Parade and Family Festival” the highlight of the day will be the 35th annual parade, which showcases the theme “Our Heroes”. It begins at 11 a.m. and travels east along Olive Avenue from Keystone to Lomita streets. The parade route will be closed to vehicle traffic at 6 a.m. in preparation for the Burbank Fun Walk/Run at 7:30 a.m. to be followed by CicLABurbank — a bicycle ride on the parade route — beginning at 8:30 a.m. and organized by WalkBike Burbank.

Post-parade events from 2 to 4 p.m. include a car show, street dancing to live musical entertainment and over a dozen food trucks.

It will be a wholesome, epic event, said parade President Carey Briggs.

“We want to make this day the most robust day in Burbank,” he said. “I’d like to see everybody come out to the parade and not just the parade, it’s going to be an epic day of celebration. We are having more events than we’ve ever had on parade day and we are hoping to showcase Burbank’s volunteers and their heroes.” 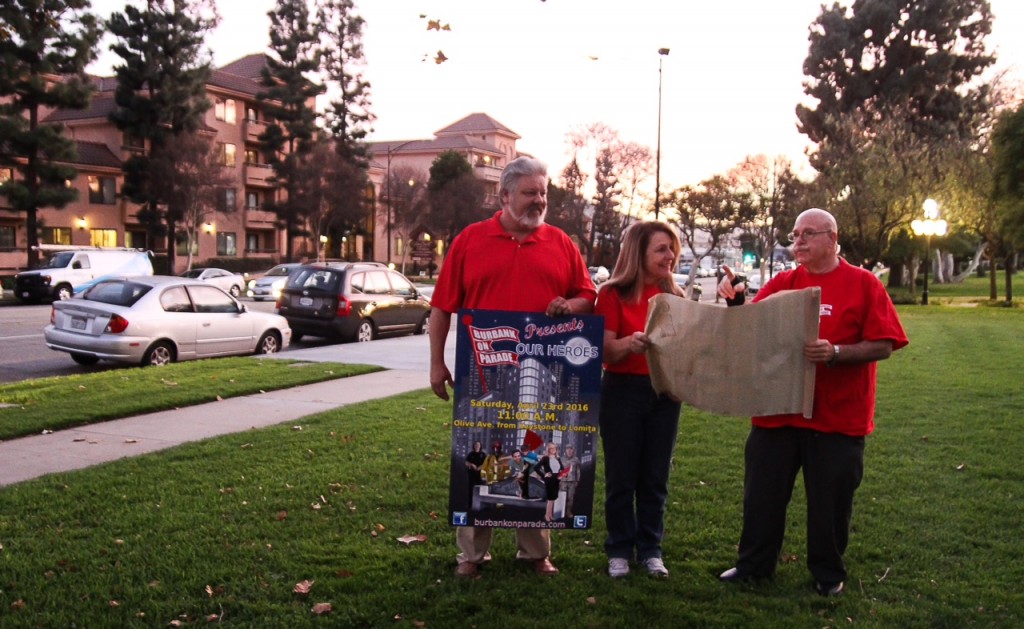 Organizers, from left, Carey Briggs, Joanne Lento Miller and Ross Benson plan where the post-parade entertainment will be on Olive Avenue for the Burbank On Parade and Family Festival scheduled on Saturday, April 23. ( Photo courtesy Burbank On Parade)

There will be fun things the whole family can do together before the parade, said festival chairman Ross Benson.

“All ages can join in the run/walk as well as the bicycle event,” he said. “With the Chandler Bikeway in town, more families are spending their weekends on two wheels — and when is the last time you got to ride your bike down the center of Olive Avenue?”

After the parade there will be a car show, live music and food trucks.

“We want people to sit back, enjoy good music and enjoy the cars driven in the parade plus other community members showing off their classics,” he said.

A lot of planning is going into this special 35th anniversary year of the parade with activities that will include everyone, said parade chairwoman Joanne Lento Miller.

“The committee is organizing a fun-filled day for the whole family — mom, dad, grandma, grandpa and all the kids,” she said. “We will have something for everyone.”

The carnival games — especially the prizes — won hands down as the best part of the annual PTA Family Festival at Washington Elementary School on Friday night. 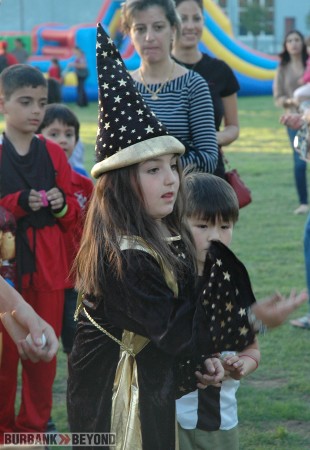 The playground had several game booths and two inflated obstacle courses that the kids could play on. A graveyard adventure was created in the school’s vegetable garden. Selling refreshments were food truck vendor Mike’s Catering and Jamba Juice.

Second-grader Maian Maouas, 7, was dressed in a sorcerer’s costume, and tried the bean bag toss.

“There are lots of games and I can have fun with my family,” she said about her favorite parts of the festival.

Patrick Hovsepian, 7, in a Batman costume, said he liked to win prizes. The second-grader was with his grandmother Odat Dergellstin and her granddaughter Jizel Galstian, 2.

Cousins Mary Alnamh,10, a fifth-grader, and Joelle Nakoud, 9, a fourth-grader, went down the inflated slide at the same time. Joelle said it’s fun to have a cousin attend the same school. They see each other at recess.

Someone took a lot of time coordinating the costume worn by Athena Kazarian, 9. She was dressed like Kendra, the beautiful witch from the film “Beastly.” The fifth-grader, was waiting in line to try the inflated obstacle course. 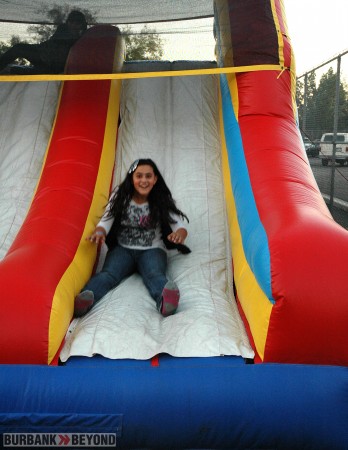 Mary Alnamh, 10, a fifth-grader at Washington Elementary School, scoots down the slide. (Photo By Joyce Rudolph)

Her favorite part about the festival is the games, she said, “because we get to win stuff!”

Trying the Jack O’Lantern Disk Drop was Celine Karch, 7, a second-grader. She had a heart painted on one cheek and a Hello Kitty on the other.

Emma Rodda, 6, looked lovely in her Sleeping Beauty costume and was having her face painted by parent volunteer Alycia Glaude.

“I dabble in art on the side and do my kids’ makeup for Halloween,” Glaude said.

Her daughter Aaya Frew, 6, a first-grader at Washington Elementary, was made up to look like a cat.

“She collects butterflies,” she said. 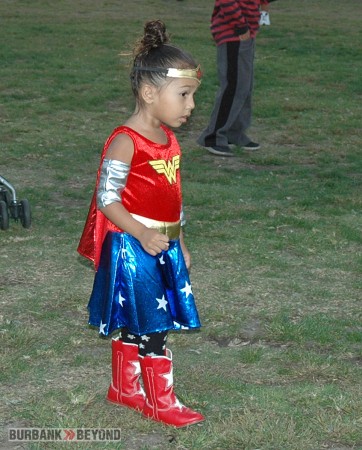 Dy lilah Vargas-Tafoya, 3, dressed as Wonder Woman, watches the other children make their way through the inflatable maze. (Photo By Joyce Rudolph) 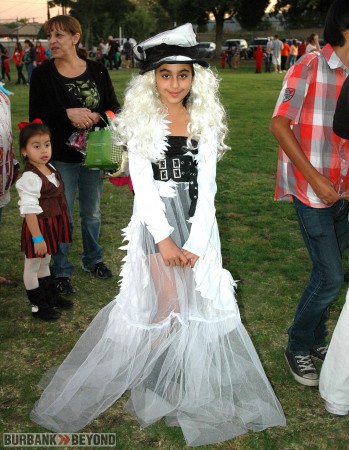 Athena Kazarian, 9, a fifth-grader, chose dress like Kendra, the witch from the film “Beastly.” (Photo By Joyce Rudolph)

Glaude brought Emma to the festival to support the PTA projects, she said.

“The festival is fun and it raises money for the school.”

There were about 25 parents and 20 junior high and high school students, working on their service hours, volunteering at the festival, said Aylin Galstian. The Student Council ran a bake sale and proceeds will go to the Outdoor Science School.