Several references were made to the car crash last weekend that took the lives of five youths and left one injured.

In his invocation, Pastor Ross Purdy asked the audience to remember the victims and families with a moment of silent prayer, adding that Family Service Agency’s purpose is to provide help to people in crisis.

But board officers, employees and supporters found there was much to celebrate with this being the agency’s 60th anniversary. 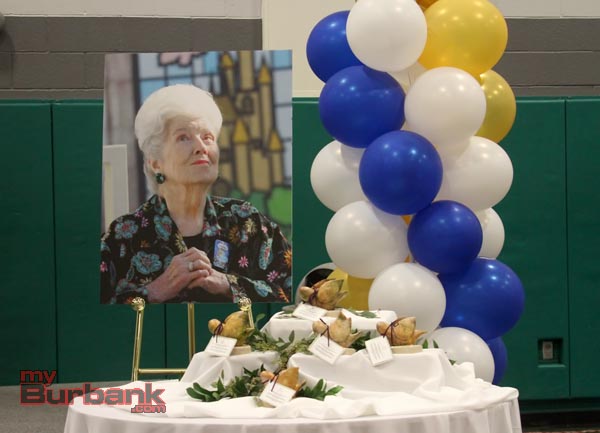 Four individuals and two businesses were presented with the Mary Alice O’Connor Vision Awards. O’Connor, a tireless volunteer with numerous charitable organizations, often was referred to as Burbank’s Fairy Godmother because her likeness was the model for the character in the Disney animated feature “Cinderella.” O’Connor died in 2010 but her legacy included being a founding member of Family Service Agency when it began in 1953.

O’Connor was someone who made miracles happen, said past Vision Award recipient Mary Alvord, a former city manager. She and several other women knew that some people did not live happily ever after. And they created the agency, which provides help for victims of domestic violence as well as counseling for families, individuals and students on all levels in the school district and many other programs. 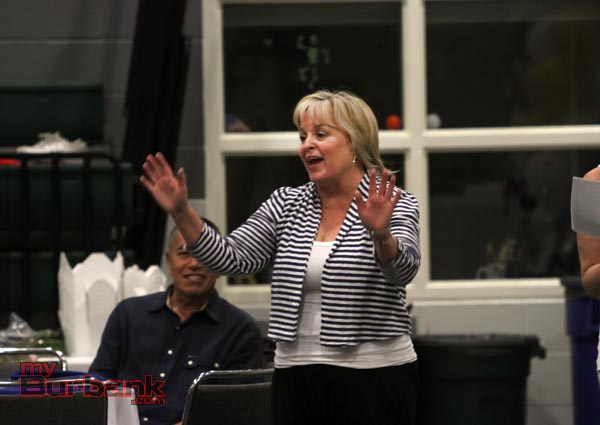 “As one of the original Women of Vision honored by her, I can only say how truly grateful I am that my life was touched, enriched and changed forever by the bibbidi-bobbidy-boo magic that she did so well and that she used to make miracles happen throughout this entire community,” Alvord said.

Those honored for their vision in support of the vital work of the agency were Burbank Police Captain Michael Albanese, Burbank School Board member Dave Kemp, Pastor Ross Purdy, Cartoon Network and Burbank Healthcare Foundation. A special surprise was the addition of mistress of ceremonies Anja Reinke receiving the Vision Award.

The agency needs corporations and every individual in the room to help it do its critical work every day, Executive Director Laurie Bleick said. 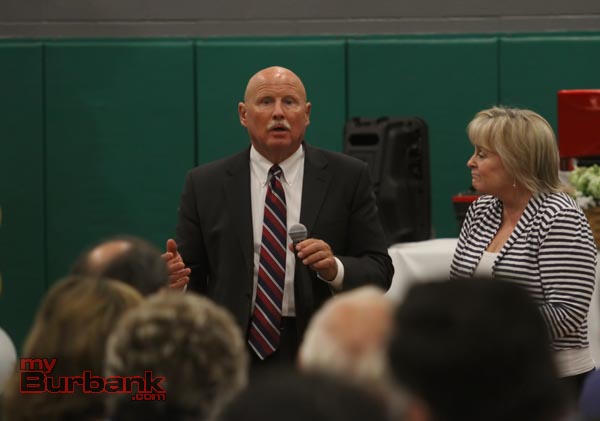 “Please know that we can’t do it without you,” she said.

Capt. Albanese was recognized for helping with the agency’s work with domestic violence and mental health services, Bleick said.

“Our domestic violence program has never worked more closely with the police department since (former) Chief David Newsham, who is extraordinary, than we are now, and much of that goes to this man’s vision and not just the vision but the action taken behind that and that takes courage, intelligence and that takes an undying passion every day,” she said. 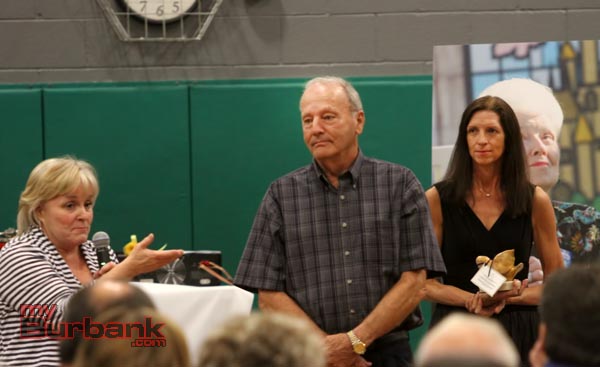 Dave Kemp was honored for giving 48 years to students in the Burbank Unified School District. He has been a teacher, coach, athletic director at Burbank High School and is in his third term as a member of the Board of Education.

Kemp was humbled by the honor, and said his success was attributed to a great team around him.

“First of all I’d like to acknowledge my wife Judy,” Kemp said. “She has been a great support throughout the almost 50 years I have been with the school district. It’s been a grand journey for me. I am blessed to work with the people who serve on the board and we have so many wonderful teachers and staff who work with the children on a daily basis. This community is one of the most caring groups of people. When things go wrong, we have a lot of people step up and want to solve problems.” 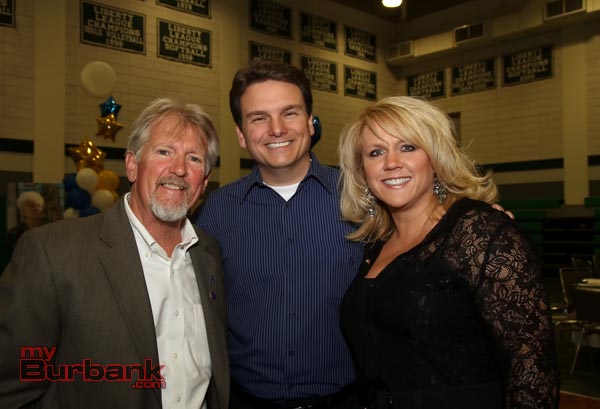 Pastor Ross Purdy received the honor, Bleick said, for being available whenever she calls and for his spiritual leadership.

“No matter what your faith is, he reminds us everyday that we have a mission and we should not get distracted by the noise and there is a lot of noise in our lives,” she said. “And this is the man that I turn to and when I get in that noisy place, Ross is the man that gives me that clear picture to remind us who we are, what our work is and what we need to focus on.” 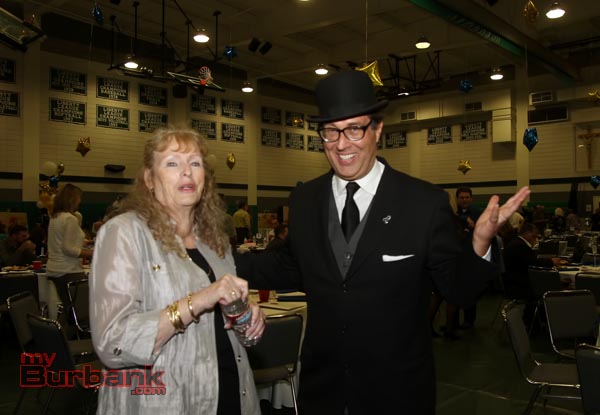 Zita Lefebvre of Cartoon Network with the Ragsdale Madison (Photo by Ross A. Benson)

Representing Cartoon Network, Zita Lefebvre was recognized for being a constant support to Bleick and introducing new friends to the agency. Burbank Healthcare Foundation’s Geri Hernandez accepted her company’s honor. The foundation has lent its support to the agency for all its milestones, especially in securing a $50,000 grant to establish the domestic violence program years ago, Bleick said.

The surprise of the evening was Anja Reinke receiving a Vision Award. 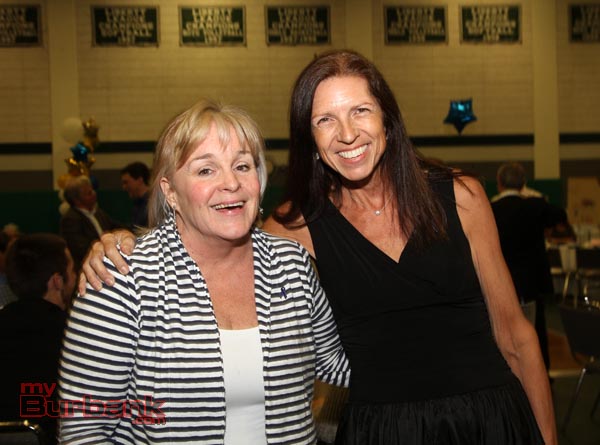 Alvord presented the honor and thanked Reinke for her longtime support and especially for coming up with the Care Walk fundraiser.

The evening included a buffet-style dinner, silent and live auction and dancing. Everyone sang “Happy Birthday” and each table had a cake in honor of the agency’s 60th anniversary and Bleick’s birthday. 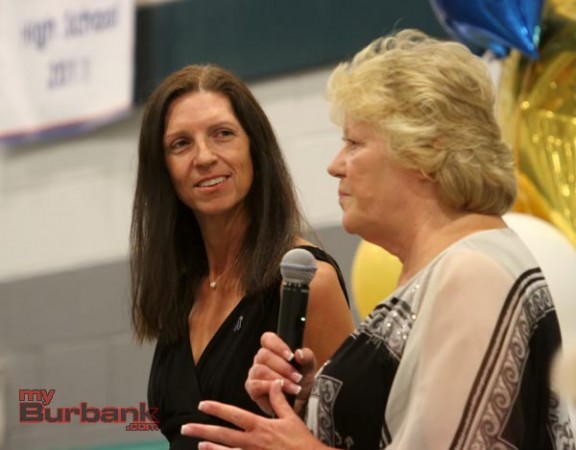 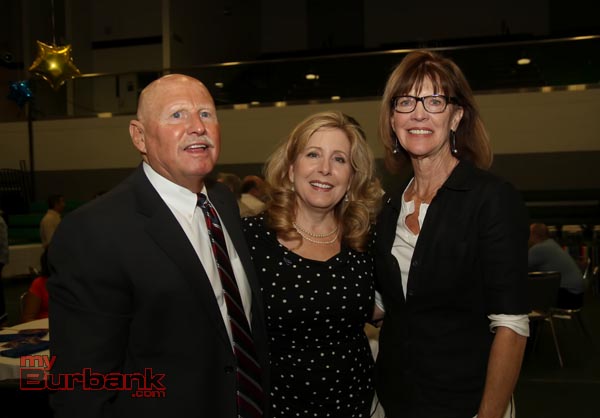 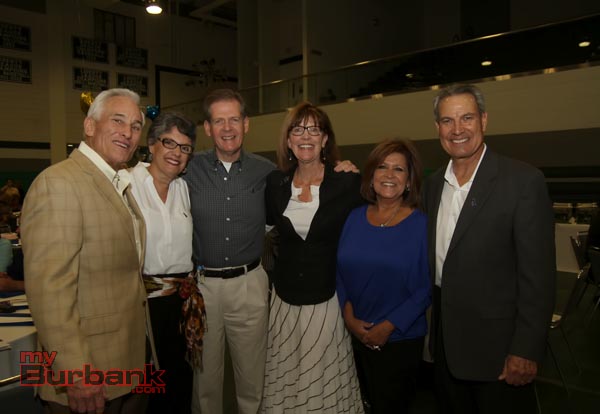 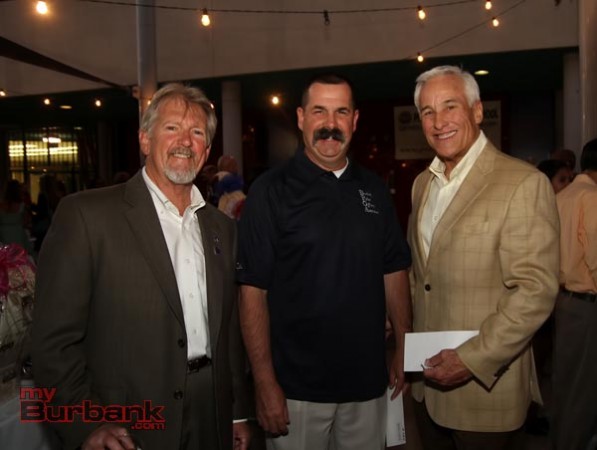 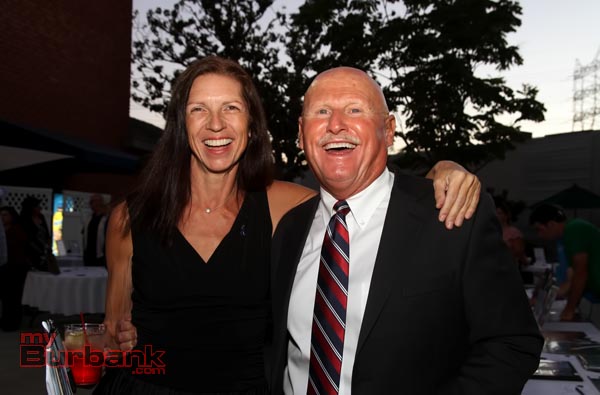 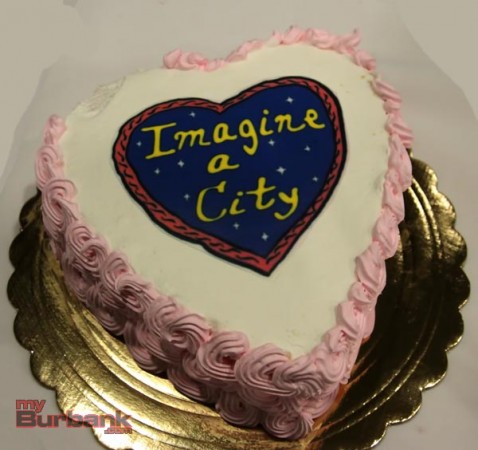 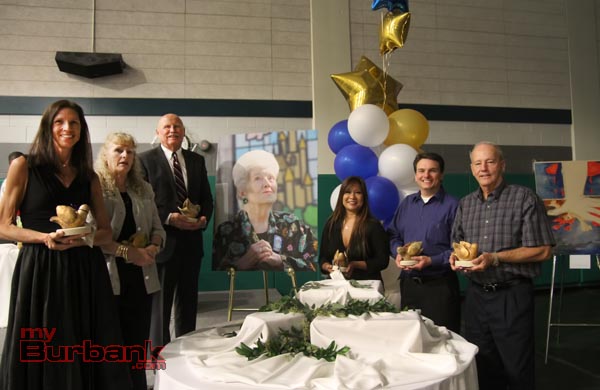 Success. Such a simple word. For some, it comes effortlessly. Others earn it but not without a struggle. The Boys & Girls Club of Burbank and Greater East Valley honored three of its supporters Saturday during its 18th annual gala and allowed those who have succeeded to tell their stories.

Guests packed the lobby of the Marriott Burbank Airport Ballroom, bidding on everything from trips to meals at restaurants in the silent auction during social hour. Dinner was followed by a live auction touting such prizes as a Maui vacation and a flight aboard a World War II AT-6 with the Condor Squadron. Although he wasn’t there to claim his prize, Al Shapiro will be ecstatic when someone calls and tells him he holds the winning ticket for the $10,000 cash prize!

It is the club’s mission to inspire and enable all young people to recognize their fill potential as productive, responsible and caring citizens. It accomplishes that goal by offering after-school programs at 17 sites in Burbank. The club serves 1,500 youngsters each day between ages 6 and 18. They engage in mentoring programs, homework assistance, technology, visual and performing arts, athletics and groups like Girl Scouts. There is also a Deaf and Hard of Hearing program and teen program.

The best part of the program is that with all the community support the club receives, no child is ever turned away from membership because their parents can’t afford it.

“The Gala is our biggest fundraising event of the year and assists us in providing 50% of our members with full or partial scholarships,” said Gala chairwoman Jami Rice.

Chief Executive Officer Shanna Warren told a story of a deaf boy who moved to Burbank from Mexico and when he came to the club, he learned American Sign Language to communicate with those at the club.

“It took a frightened little boy from a scared caterpillar to a social butterfly,” she said.

Another success story was told by the 2012 Youth of the Year Carlos Huerta. After heading down the wrong path, Carlos became a part of the Boys & Girls Club and turned his life around, he said. The Burroughs senior will start college in the fall and plans to major in business with his sights set on starting his own restaurant.
Keeping the proceedings rolling along was master of ceremonies Todd Newton, host of the Hub Network’s “Family Game Night.”

Nice touches throughout the evening were the instant photo booth, where guests donned feather boas and gold bead necklaces or shiny bow ties; thank you notes to each guest made by club members and the entertainment by the club’s Dance Team.

Two Burbank businesses and one individual were given special recognition during the evening.

Burrtec Waste Industries, a waste management company, has served the community for 50 years as experts in California regulation and legislation regarding recycling, refuse and the environment. They have been major supporters as well as worked on recycling projects with club members. Accepting the honor was Olivia Sanchez, municipal program manager.

Also honored was the International Brotherhood of Electrical Workers (IBEW) Local 18, Unit 50. When the Boys & Girls Club was starting 17 years ago in Burbank, Gus Corona, then Unit 50 chairman, served on the Boys & Girls Club board and helped to organize the donation of materials, manpower and use of equipment to transform the antiquated fire house into an after-school program for youngsters. Unit 50 continues its support of the club and other Burbank charitable groups.

Karen Volpei, a Realtor with the Keller Williams team, has been a longtime supporter of the club. When she decided to go into real estate, she chose Keller Williams because of its philosophy “Give Where You Live.” She says as a recipient of the honor, she represents all Realtors in town as so many are supporters of charitable organizations in Burbank.

She shares credit of her volunteer accomplishments with her husband Barry Gussow.

“Yes I am the organized one but he is very much the nicer one,” she said. “He is always there when I over commit and picks up the pieces to make sure that we get everything done.”

The media capital of the world enjoyed another celebratory evening when Burbank Arts For All Foundation threw its second annual Party on the Plaza Gala extravaganza on Friday, April 26, 2013 at the Networks Garden Café Plaza. The evening brought in more than $150,000 benefiting the Burbank Arts For All Foundation, whose mission is to ensure a quality arts education for every Burbank student.

NBC4 Southern California Weathercaster, Fritz Coleman, served as the evening’s Master of Ceremonies to a sold out crowd of over 300 who were on hand to help honor Warren Stein (Chief Operating Officer of Deluxe), Peggy Flynn (Burbank Unified School District’s Visual and Performing Arts Coordinator) and Lisa Dyson (Parent/Volunteer) for their invaluable contributions to both the Foundation and arts education programs throughout Burbank public schools.

“With the generous support of our many sponsors and gala attendees, the evening surpassed our expectations and we wish to thank everyone who contributed to this worthy cause,” jointly stated Alexandra Helfrich and Craig Murray, Co-Chairs of Burbank Arts for All Foundation. “However, there is still a lot of work to be done in order to ensure that not only students in the classroom today… but future students as well…will be guaranteed a quality arts education.”

The Walt Disney Company’s Joan McCarthy and Telepictures Productions’ Bob Mohler were Gala Co-Chairs; and two-time Emmy-award nominee and star of “Glee,” Dot-Marie Jones, represented the Honorary Dinner Chairs who also included Tim Burton, Dick Cook, Don Hahn, Ron Howard, Garry Marshall and Melissa McCarthy. “Arts education is a vital component in all of our schools and it’s comforting to know that the Burbank Arts for All Foundation has our kids’ backs. The gala was not only a lot of fun…but really inspirational. In fact, I was so inspired…I actually auctioned myself off,” laughed Ms. Jones.

Burbank Arts For All Foundation’s Director of Development, Trena Pitchford, added, “Burbank is the best! With the support of all of our donors, guests and sponsors, the Foundation will be able to directly affect the lives of thousands of Burbank students in the coming year as well as contribute to the Foundation’s daily existence. We’ve just begun to share our impact on students and teachers and we have many more plans ahead for 2013 including our inspirational, one-of-a-kind Creative Circles Forums and engaging community gatherings. The invitation is open to join the movement!”