A video featured during the City of Burbank’s 2014 State of the City Address collected a Golden Mike Award for “Best Business and Consumer Reporting (Div. B)” during the Radio & Television News Association of Southern California’s (RTNA) 66th annual awards ceremony in Universal City Saturday night (1/23). 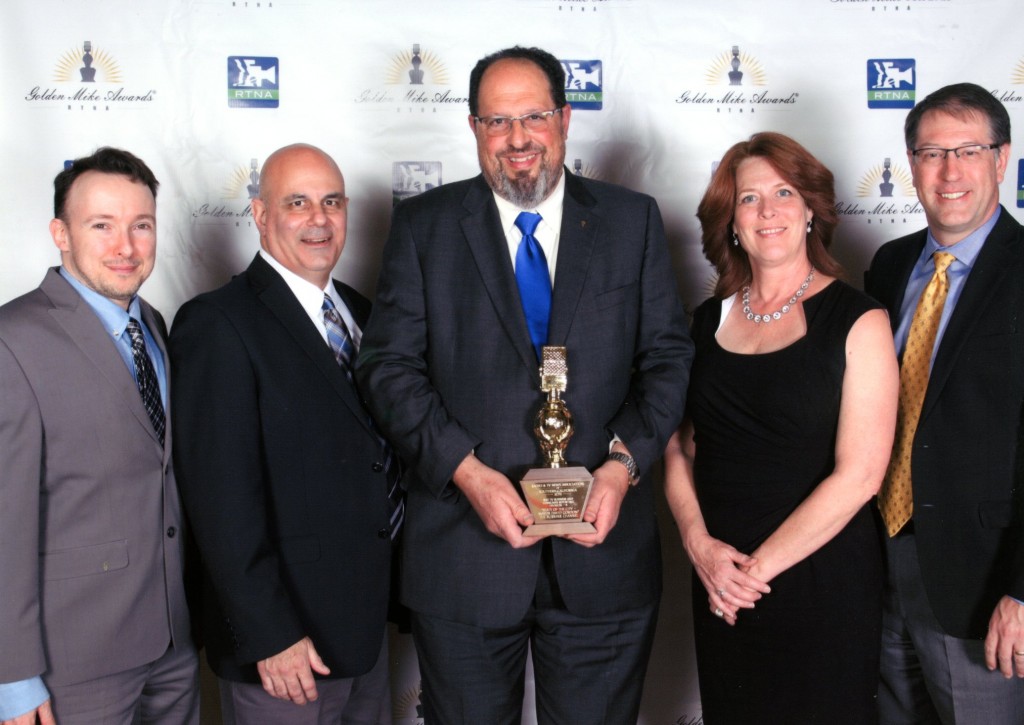 The 12-minute video created by the City’s Public Information Office and narrated by then Burbank Mayor Dr. David Gordon, focused on Dr. Gordon’s initiative to encourage workforce training programs in Burbank. The video, which debuted at the Burbank Chamber of Commerce-sponsored annual State of the City address in October 2014, featured a groundbreaking workforce training program in San Bernardino and explored the possibility of creating something similar in Burbank.

Members of the Public Information Office’s award winning team and Council Member Dr. Gordon attended Saturday’s award ceremony to collect their prize alongside news organizations from across Southern California. “It was certainly a unique and enjoyable experience for me,” said Dr. Gordon. “I’m an optometrist by profession, TV award ceremonies aren’t usually part of my job description. I just hope this inspires more conversation about increasing our community’s commitment to increasing workforce training opportunities here in Burbank.”

The Burbank Channel can be seen via Charter Sprectrum on Channel 6 in Burbank and Channel 16 in Glendale; via AT&T U-verse on Channel 99; and via live streaming on the City’s website burbankca.gov.

If you have been watching Burbank TV’s Channel 6 over the years, you have seen a more and more professional look over the years along with some great story telling.  One of Public Information Officer Keith Stirling’s amazing staff, Peter Musurlian was recently honored for his work here in Los Angeles.

Musurlian won five Golden Mikes on January 22nd at RTNA’s annual awards banquet in Universal City.  It is the first time in the 61-year history of the award that an individual has single-handedly won five Golden Mikes in TV categories, as a one-man band entrant. Musurlian produced, shot, wrote, and edited all of his winning entries.

Since 2002, Musurlian had won three Golden Mikes. His record-breaking evening in January now brings his career total to eight.  He has also garnered two Los  Angeles Area Emmy nominations over the past decade, all for his work at The Burbank Channel(formerly known as BTV6), the Government Access Channel for the City of Burbank.

The prestigious Golden Mike is awarded for excellence in broadcast news, by the RTNA, the Radio & Television Association of Southern California. (More information on the RTNA can be found at www.rtna.org).

Musurlian’s 12-year-old program, Burbank Magazine, won for Best News Public Affairs Program in Division B, which is the division for TV stations with fewer than 50 employees.

Musurlian also won for Best Serious Feature Reporting, for a story on a Burbank Lions Club trip to Mexico to dispense free eyeglasses; Best Business & Consumer Reporting, for a story on Gavina Coffee, the largest privately-held minority coffee roaster in America; and Best Entertainment Reporting and Best Video Editing of a Feature Story, for a report on “runaway production,” about movie and television productions shooting outside California to cut costs.

Musurlian, the grandson of genocide survivors, is a former television news reporter in Montana, Texas and the nation’s capital, as well as a U.S. Army veteran, who reported for American Forces Network in Central Europe and the Balkans in the late 1990s. He holds a B.A. from the University of Southern California (USC) and three master’s degrees from schools in Texas, California and Washington D.C.