“I feel pretty proud about it!” said the 11-year-old who is in the fifth grade at Edison Elementary School. 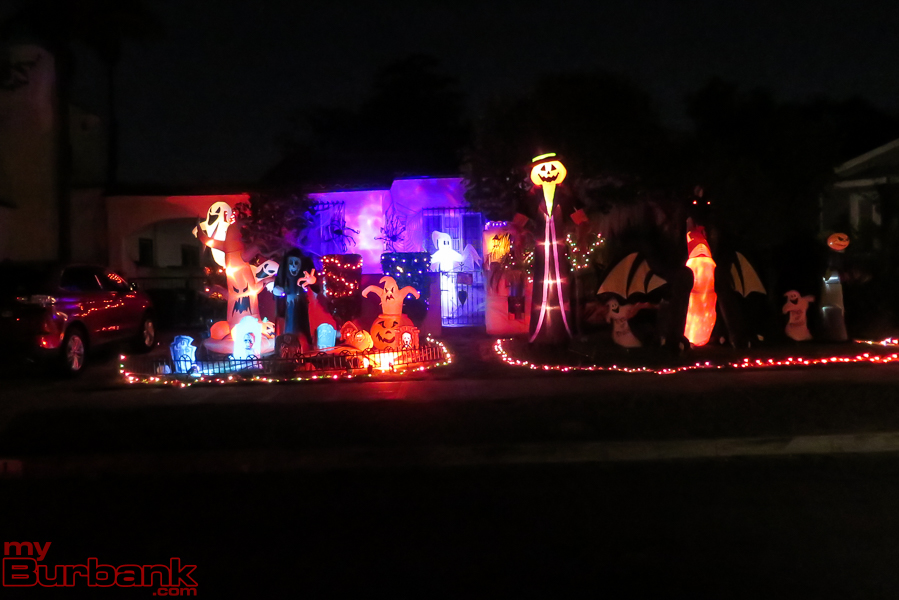 It took him and his mom, Faith Wyatt, three weeks to decorate their front yard at 841 N. Frederic St.

They have created a spider web scene on one side of the yard and two large spiders on a web on the porch. There is a graveyard covered in spider webs. New this year are an inflatable ghost on the front porch and a raven that talks.

George is so inspired having won the contest again that he plans to decorate his yard next year, he said. Down the road he would like to build a maze for people to walk through.

He is looking forward to being honored at the City Council meeting.

He and his mom are planning to work together on decorating the yard for Christmas as well. 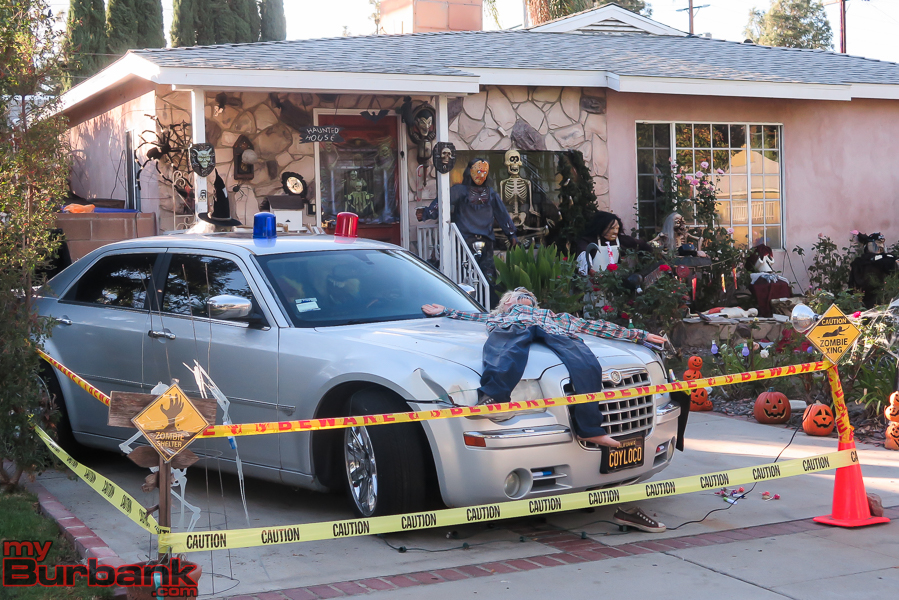 “It’s very exciting!” she said, adding that she almost started to cry when she found out she had won.

She loves to decorate for the holidays inside and outside her Burbank home. When she lived in Downey she won the city’s Christmas decorating contest three times, she said.

She started decorating for Halloween two weeks ago and she and her boyfriend Arnulso Padilla keep adding things. Her daughter Miranda Schaefer went with her to City Hall to fill out the contest form.

There is a graveyard filled with frightening scenes and creepy visuals. A car in the driveway has a ghoulish character at the steering wheel while a dummy dressed as a trick-or-treater is sprawled on top of the hood. 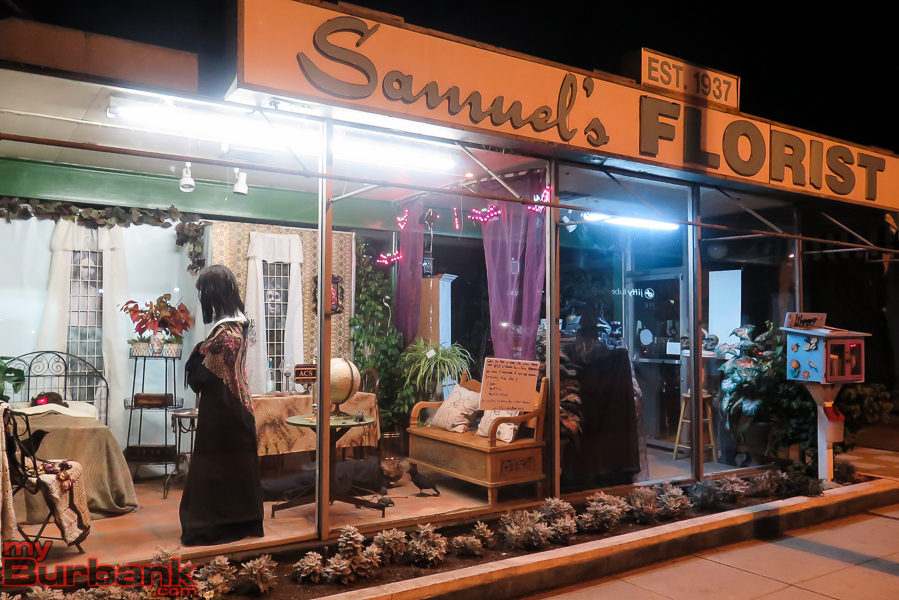 What makes it fun is the theme comes from a gothic novel but the owner makes it a contest for people to guess which novel. The contest ends on Monday night. For more information, go to the store’s FaceBook page. Those who guess the right title will be entered in a drawing for a holiday bouquet.

For clues, there is a ghost looking in the window as well as a globe and pencils on the table.

“The whole secret guessing is figuring out who the woman is,” Smith said.

Employees Tacey Clover created the design and Veronica Gandara put all of the details into the design. 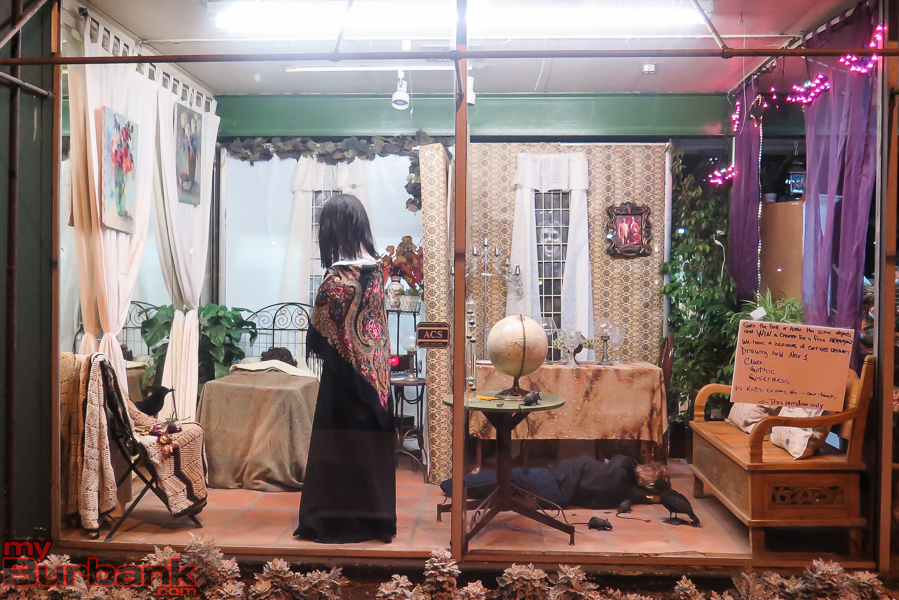 To view a list of all of the contestants that entered this year’s competition, visit burbankca.gov/civicpride.

A haunted jack-o-lantern greets brave visitors at the foot of the porch steps.

A collection of jack-o-lanterns and other frightful decorations are placed on the steps.

A witch and ghoul hang from the tree.

A hand digs a grave.

A skeleton rests in peace on a grave.

Something creepy comes out of the dungeon.

The choices for best haunts were more fun than scary but they had a lot of creativity, which was just what the Burbank Civic Pride Committee hoped to find.

“The residential winner did a great job with special effects, lighting, a lot of moving parts and great atmosphere,” said Robert Vincent, chairman of the Civic Pride Committee. 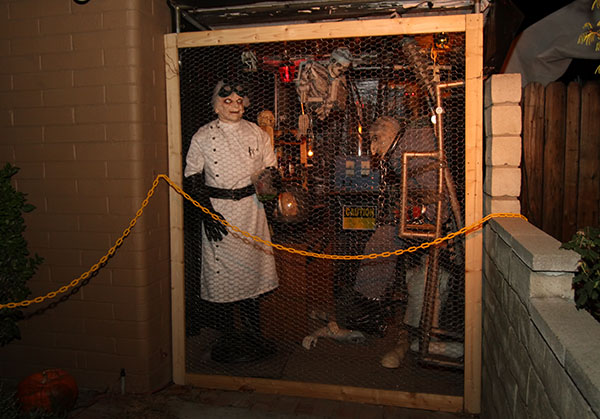 Robert Taylor, 54, has been decorating his home at 1838 N. Lima St., since the family moved in 17 years ago. Some years he’s gone all out while others not so much.

Like three years ago. After he fell off the roof doing a repair job, his wife nixed him getting back up there. So that year his decorations were scaled back to one.

“It was funny, that year I ended up doing a Halloween prop where it was a skeleton hung upside-down on a ladder and it was dressed like me,” Taylor said. “We put a beard on it and a tool belt.”

Last year, he came pretty close to the number of decorations he has this Halloween.

First of all, it’s all PG rated. There is no blood or gore, because a lot of young children come by from the child care center across the street and the church next door. The Taylor Terror Estates, as he calls it, is more like a haunted mansion.

“We want kids to come up. If they are afraid, I go as far as to take the heads off and show them they are dolls,” he said.

In one corner of the Enchanted Graveyard are three pumpkins who sing and tell jokes. A grave digger welcomes people and dances and sings. A skeleton butler greets people at the front door. And for those who get too close, whoosh — they get a shot of air blown into their face.

A grim reaper in the center of the yard automatically opens up his coat jacket and he shows you the souls he’s kept. The angel of death stands on the roof and his wings move up and down warning you not to come closer. Three dormer windows each have something spooky going on. Ghosts fly around in the first window, a chandelier flickers in the second and the third has a headless bride crying for her husband.

Most of the creepy characters throughout the front yard were originally CVS drug store props and he has collected them and used his magic to repurpose them and keep the animatronics working.

“They were never designed to last more than a year or two and I’m going on 15 years,” he said.

He was repairing the jaw piece on a character’s mouth. When the manufacturer told him they didn’t have new parts for it, he had to have a 3D printing business make a duplicate part.

Other things he has built from scratch, like the fence around the graveyard and the crank ghost in the crypt who rises up from a coffin.

His brother, Richard Taylor, 53, does a lot of the scene setting.

The inside of the house was equally eerie as the outside. Robert Taylor had hung two photographs — a woman and a man taken during the early 1900s — whose faces change to skulls as one walks from one side of the room to the other. On another wall, a ghoul trapped inside a mirror looks out and begs for someone to “get me out of here!”

When he stopped going trick-or-treating, about age 10, he started decorating the house for Halloween, he said.

Even Taylor dresses up for Halloween. His alter ego is Professor Fuzzywick and he’ll be reshaping his beard and wearing Victorian clothing.

The animation will continue this weekend through Sunday. Donations are accepted for the Juvenile Diabetes Research Foundation, a nonprofit organization dedicated to researching and treating Type 1 diabetes.

The house winning the youth category, 841 N. Frederic St., featured several blow-up characters including a dragon with eyes that light up red, a huge black cat sitting on the grass and two giant eyeballs hanging from a tree.

“The lighting was great and it was creepy in a good way,” Vincent said. 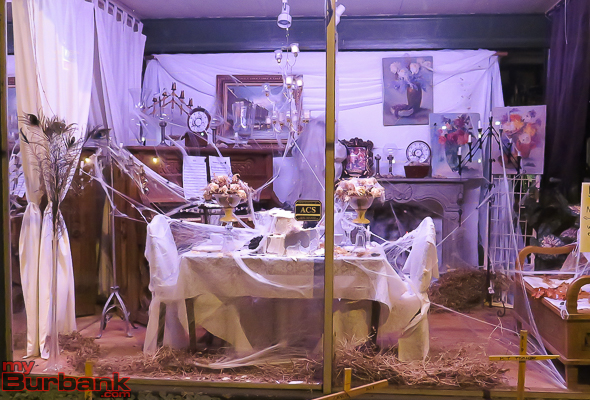 Donna Smith, owner of Samuel’s Florist, 921 W. Olive Ave., the Commercial winner, and her staff repurposed things around the shop to decorate the two front display windows. One window had a dining room table decorated with a lace tablecloth and a wedding cake with rats tasting the icing. A mannequin in a white lace gown is facing the wall so all one can see is the veil and the back of the wedding dress.

“We wanted to utilize some of the stuff we already had and I didn’t want to do typical Halloween things,” she said. “I had the dress form so I immediately thought of the character.”

The window is a scene from a story and Smith is having a contest in which the winner will receive a free arrangement if they guess what story the window is depicting.

“They did a beautiful job,” Vincent said. “They had kind of a spooky tea party that looked like something out of Disney’s Haunted Mansion.”