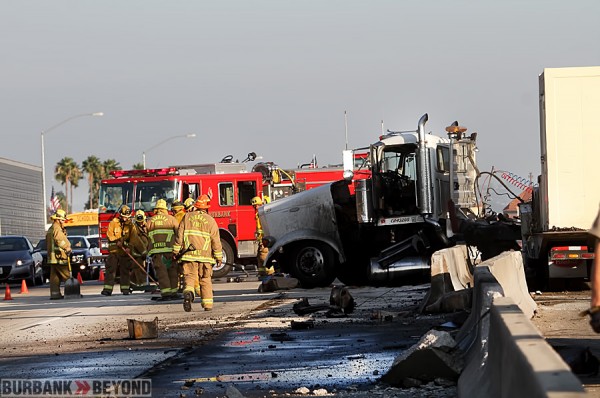 Burbank Firefighters work to clean up a diesel spill that resulted in a major accident that closed the I-5 in both directions Friday afternoon.(Photo by Ross A. Benson)

Burbank Fire units received a call at 5:05 pm of a major truck accident on the southbound 5 Freeway at Hollywood Way.

Upon arriving at the scene, they found a tow truck, SUV and big rig had been involved in a accident and the can of the big rig had crashed through the cement center barrier of the freeway and was resting in the northbound lanes of the freeway.

While all three vehicles received heavy damage, there were no reported injuries, but the real concern turned to the diesel tanks of the big rig which were spilling diesel fuel across the northbound lanes.  All lanes in both directions were at a complete stop. 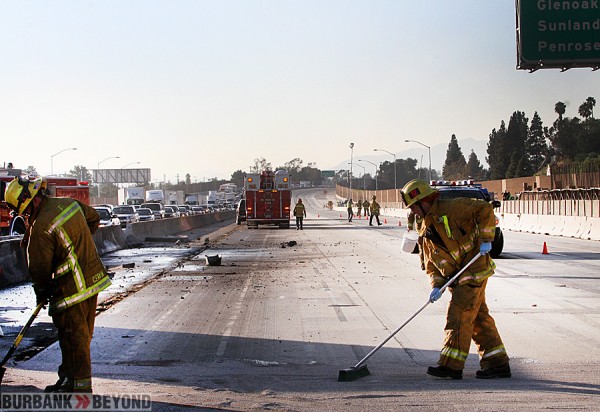 Burbank Firefighters work on containing a HazMat spill that resulted from the traffic accident northbound I-5 at Hollywood Way. (Photo by Ross A. Benson)

Burbank’s Battalion Chief called for the Hazardous Material (HAZMAT) trucks from both Burbank and Glendale to respond to assist in stopping and cleaning up the fuel before it was  able to get into storm drains.  A check directly below on Hollywood Way showed that nothing had come through the freeway bridge above.

Once the spill was contained, officials opened one lane on each direction to start relieve the congestion until a trow truck was brought on scene to remove the truck cab, which once again closed lanes.

During the incident, Burbank streets such as Glenoaks and San Fernando quickly filled with motorists looking to get around the area.  Burbank police helped with traffic control.

Although the accident happened in Sun Valley, Burbank shares a mutual aid agreement with Los Angeles Fire and since Burbank was first to arrive on scene and had the situation under control before LA arrived because of traffic, they completed the incident.

CHP is in charge of the accident investigation, which is still on-going. 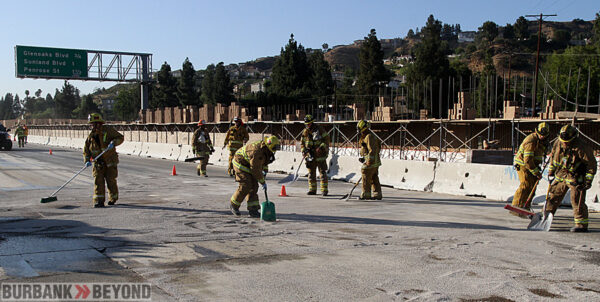 Burbank Firefighters clean up a Diesel spill on the northbound I-5 at Hollywood Way as a result of a major truck accident. (Photo by Ross A. Benson)

A truck carrying Chlorine and Pool Acid was involved in a minor traffic accident at the intersection of Buena Vista and Glenoaks Blvds. Saturday morning. A liquid started to leak from the inside of the Bobcat type truck, causing the Fire Department to go into HazMat mode and closing down Glenoaks Blvd.. Burbank Fire’s Hazardous Materials team along with Glendale’s Hazardous Materials units were called into check the severity of the spill. When the back of the truck was opened, it was determined that the spill was very minor and could be cleaned up by the fire dept. The accident didn’t cause any injuries, and the materials spilled were cleaned up removed by the Hazmat team.