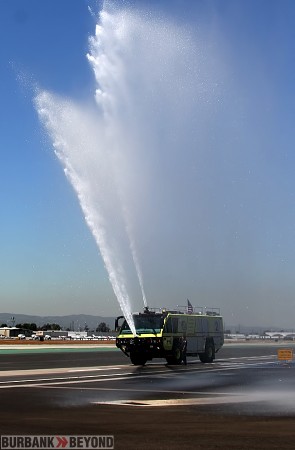 Bob Hope Crash rig displays it powerful nozzles with over 1500 gallons a minute. (Photo by Ross A. Benson)

This years Burbank Summer Daze Camp located at Robert Gross Park recently took a trip over to The Bob Hope Airport, to see how the Airport runs and get a show from the different agencies that make up the airport’s operations. 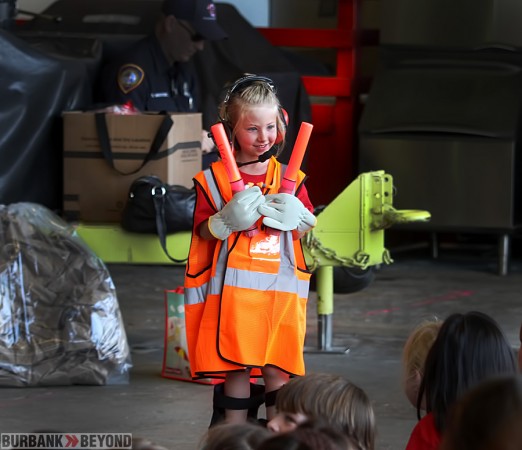 The campers heard from Police Officers, Firefighters, Southwest ticket operators, and the members of the TSA and were able to see the equipment the different people and agencies use.

Many of the campers commented that this is the best field trip they had ever been on. The best part for some where getting wet from the spray of Crash 2, or looking into the inside of a Jet, while a couple enjoyed looking into the Burbank Police Helicopter.  Of course at the end, all of them enjoyed the pizza lunch that was served before heading back to the park.

Campers even got to see one of their counselors handcuffed, and an Airport Authority Police officer use his taser on a demo board. 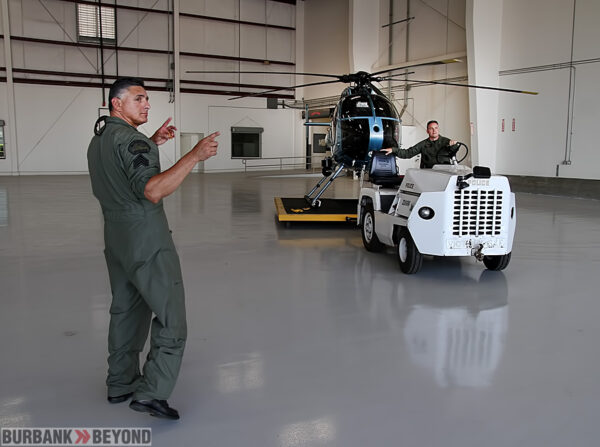 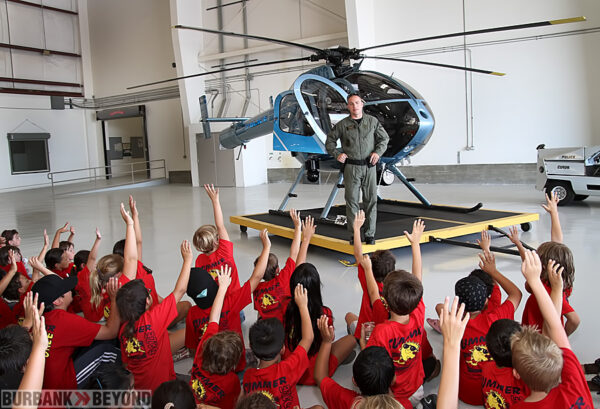 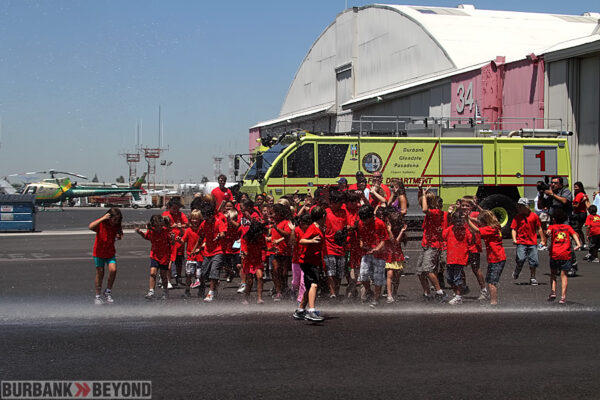 Getting drenched in the 100 degree heat was the best part of the day. (Photo by Ross A. Benson) 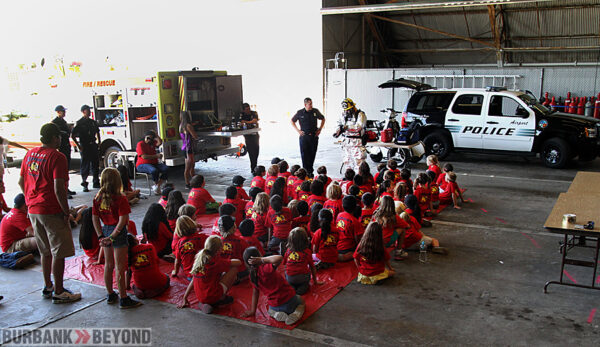 Summer Daze campers find out what the role of the Airport's Fire Department. (Photo by Ross A. Benson) 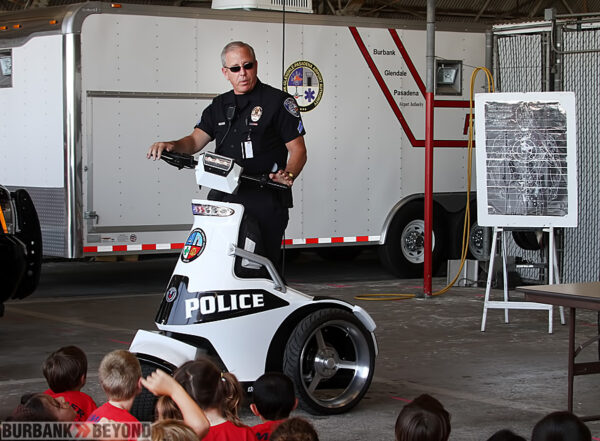 Bob Hope Police Officer Steve Bock shows the kids one of the ways they get around the airport on this T-3 transporter. (Photo By Ross A. Benson) 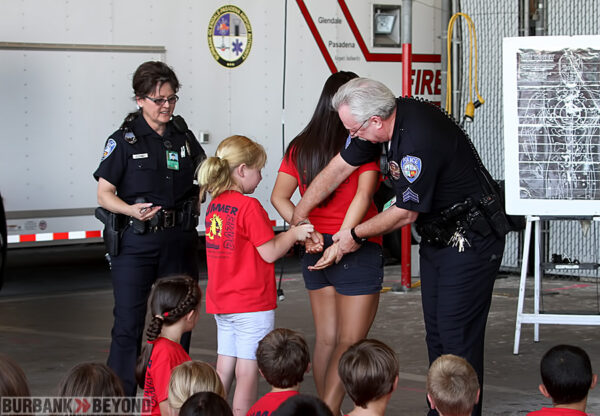 Lock up time as a camper uses a pair of handcuffs to lock up her counselor. (Photo by Ross A. Benson) 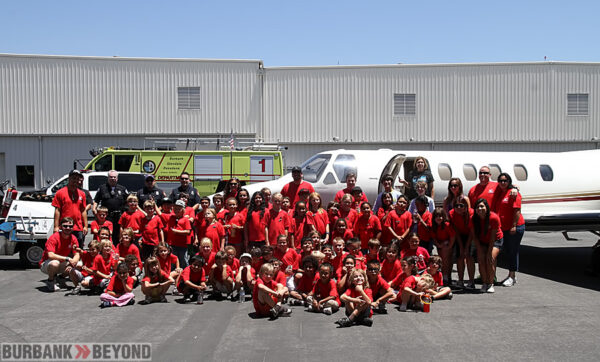 After boarding this private jet the Summer Daze camp poses for a group photo. (Photo by Ross A. Benson)

Opening the parade with a flyover will be a couple of helicopters, one of them Burbank Police Department’s own Hughes MD520 Notar® helicopter (no tail rotor blades). It is one of three units that is operated by Burbank’s Air Support Unit.

Burbank provides patrol services to cities of Burbank, Glendale and Pasadena along with emergency services provided to other government agencies when requested. These helicopters cost in the range of $1.5 million when fully outfitted with all the police departments special equipment, such as Moving Maps, GPS, Computer Downlink, radios, Lo-Jack system and a flir. (Forward looking inferred camera).

The top airspeed of these helicopters is 160 Knots or about 170 MPH but to conserve fuel, normal patrol cruise speed is around 60 MPH and while working standard patrol they fly around 500 feet altitude. When working a perimeter at a possible crime scene, they can lower to 300 feet. Helicopters do not have minimum height requirements but need to fly high enough to be able to land in auto rotation mode in the case of an emergency.

The staff of the unit, located at the Bob Hope Airport, consists of five police officers, one sergeant and one civilian mechanic. The unit is combination of personnel from both the Burbank and Glendale Police Departments. The unit works seven days a week and depending on the day of the week will be on duty until 2:00 in the morning.

Today’s Air Boss will be Burbank Police Sergeant Robert Quesada. When he makes his appearance overhead you will all know it and make sure you give him a wave because he’s looking down and waving back. 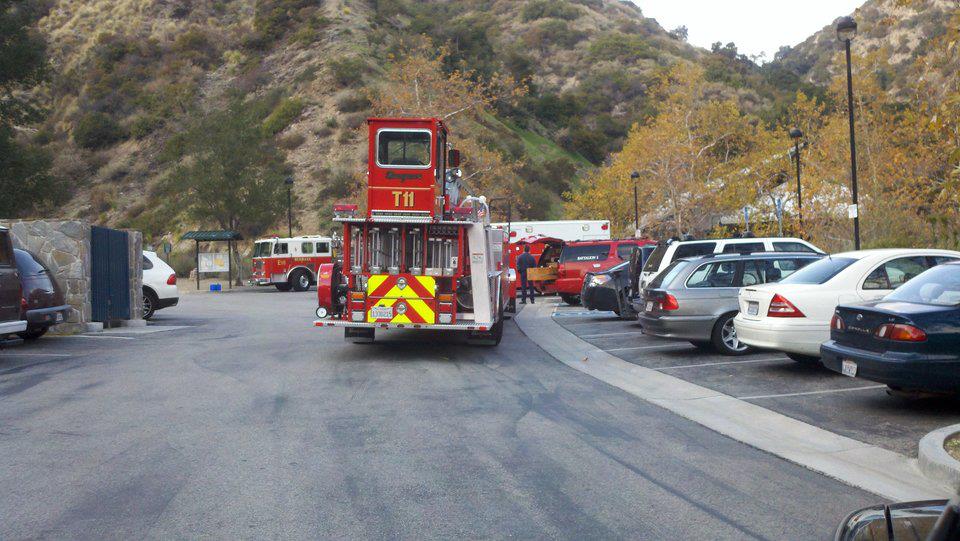 Burbank Paramedics were called at 2:08 pm on Sunday for a report of a bicycle rider who had fallen on the trail above Stough Canyon Nature Center in Burbank.

Upon arriving at the Nature Center, they took their Patrol Unit up the fire road about a mile and found a 44 year-old man who had fallen and was unable to move his legs.  Feeling that bringing the victim back down in their patrol vehicle may hurt the victim more, they called for a helicopter to airlift the victim. 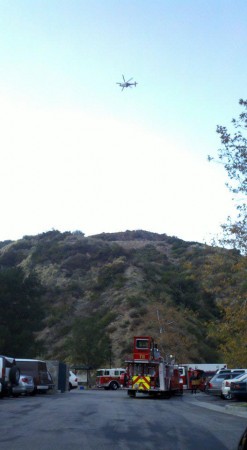 Air 5 from L. A. City Fire was called in the air lift a man who had fallen from his bicycle on a mountain trail (Photo By Trent Welker)

Burbank called L. A. Fire, with whom they have a reciprocal agreement , and asked for one of their helicopters to assist in the rescue.  The victim was then air lifted to County USC Medical Center where his injuries and condition have still not been released.

The entire rescue took about one hour.

The Professional Helicopter Pilots Association [PHPA] gathered this weekend for a training day and group discussion at nearby Bob Hope Airport’s Atlantic Aviation. Local Channel 2 and TV Channel 9’s on air personality and pilot Desiree Horton  was on hand to share some of her flying experiences with those gathered. The keynote speakers of Desiree Horton, Tom Short Chief Pilot of LA County Fire Department along with Pat Carey gave updated information and details to the changing airspace that the local helicopters fly.