Camacho has a strong interest in Applied Sciences and plans to major in Engineering at UCLA, said MCCCU Business Development Rep Maricela Castillo.

Media City CCU announced the scholarship opportunity in March 2014 and awarded the funds on May 15. Students provided official academic transcripts and letters of recommendation from teachers, mentors or employers.

A team comprised of members of the MCCCU Board of Directors and management reviewed the applications and selected the top candidate based on academic achievement and contributions to the school and the community.

The scholarship assists a college-bound graduating senior with money towards tuition, books or other educational expenses.

Burbank and Burroughs High Schools held Career Technical Education (CTE) Days on February 20 and 21 in the schools’ auditoriums. Thousands of each school’s students were able to visit with varying career and education representatives during classes and lunch. 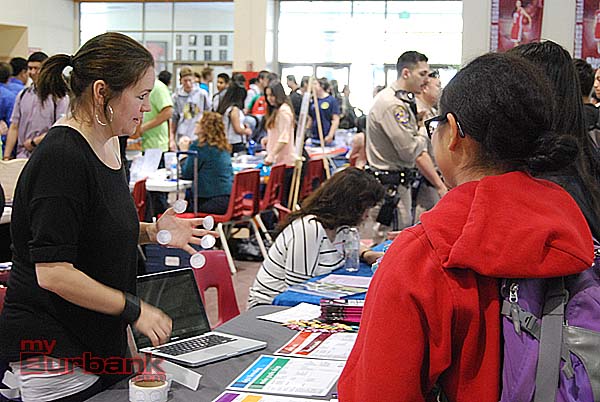 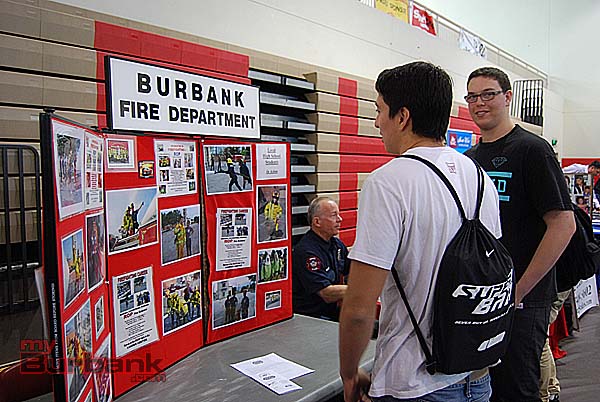 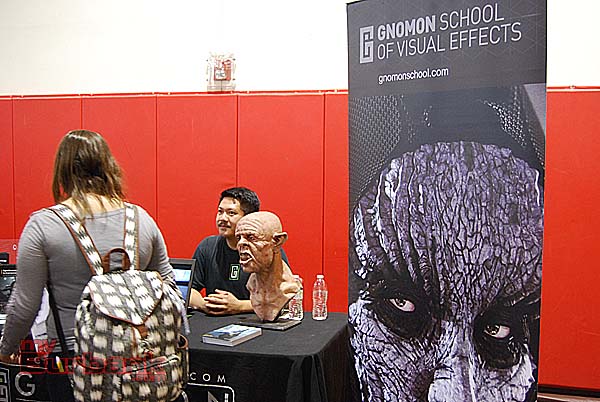 Animal care, medical and nursing, aviation, information communication and technology career speakers were some of the additional options available for students to learn more. The event was sponsored by Ralph’s, Trader Joe’s, Sprouts, Fresh n’ Easy, Chevy’s, Domino’s and Corner Bakery, provided snacks and drinks for exhibitors and spokespersons.

Student representatives of the ROP program, which includes all manner of technical, creative and practical work also spoke about different aspects of the high school program and preparation for the world after secondary school with their fellow students.

The events at both high schools were very successful, according to Dysthe. Teachers brought many classes to the career day events and hundreds of students filled the gymnasium at a time, gathering information and talking and thinking about their futures.

There is a classic Seinfeld episode where Jerry feels like he is in “Bizarro World” – a world of his idol, Superman, where everything is the opposite of what it should be. 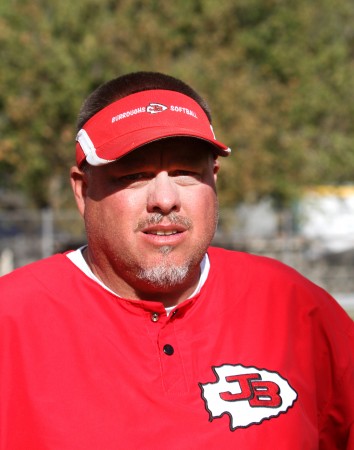 Listening to the two softball coaches of the city’s two high schools speak about their teams Wednesday night, a part of me felt like I had stepped into this world – mostly because it was Burroughs coach Doug Nicol who was the calm one.

Nicol is a passionate and competitive as ever, but he hardly resembles the coach who patrolled the hardwood of the Burroughs gymnasium almost a decade ago. In his second season as the head softball coach, he speaks confidently and passionately about his squad but with a softer side that was lacking when he was the school’s head girls’ basketball coach.

“We’ve won the league the last two years,” he said. “We return six of nine starters and we have a lot of talent so I would think we would be considered one of the favorites but ultimately we have to play the games.”

Then there is Burbank’s Nicole Drabecki, so excited and 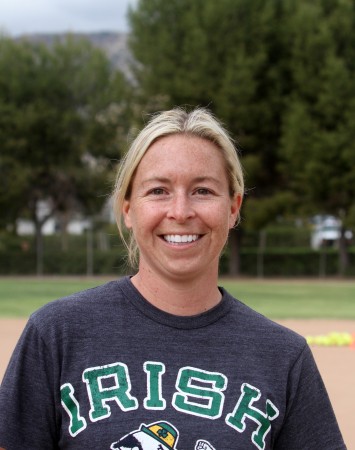 animated when speaking about her team’s chances one has to wonder if she’s already ordered the Pacific League Championship patches. She speaks so confidently that one begins to think her opinions are already facts.

“I will be disappointed if we do not win the Pacific League,” Drabecki says. “No one has the talent we have.”

She adds, “I will be disappointed if we don’t make the semifinals of CIF and frankly I don’t see us losing more than four games — I am that confident in this team.”

The best news for softball fans in the city of Burbank – and what is not part of the “Bizzaro World” analogy – is that the two teams should battle it out as the top two teams in the Pacific League this season. 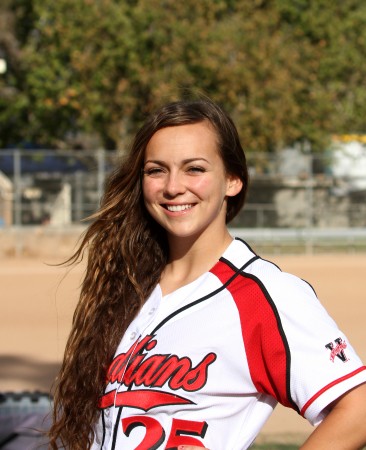 Haley Shulmann, another returning All-League selection is also back. She hit .471 last season and was also a star pitcher with a 7-5 record and 1.46 ERA in 54 innings. 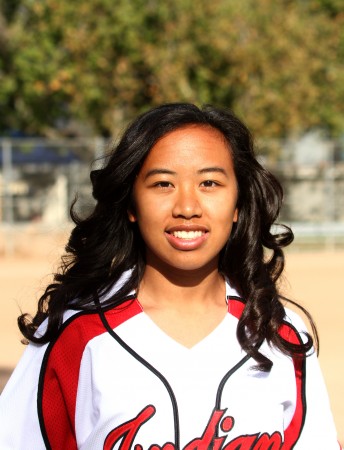 Not returning in the circle this season is Heather Haynes who was an All-CIF selection last year. Some close to the team say the talented senior simply wasn’t dedicated enough to the sport or the team to commit as a senior.

“She had other priorities,” Nicol said, wanting to focus on who was back rather than who was not.

Seniors Caitlin Loera and Allie Grimaldo are back to anchor the middle of the infield and the corners seem set between freshman standout Michelle Santiago at third base and sophomore Aimee Rodriguez at first.

“The girls work hard and they have talent,” Nicol said. “At the same time we know there is a bull’s eye on our backs having won the league the last two years. Burbank got a great pitcher and they have a lot of talent and CV (Crescenta Valley) will be tough too.” 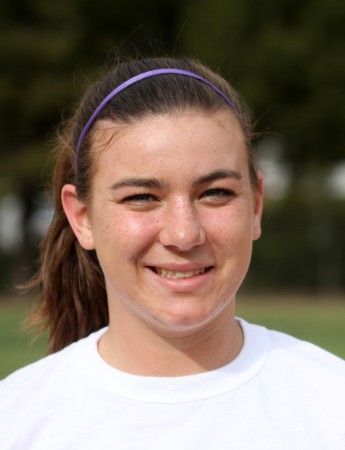 awhile. Drabecki says she has already heard high praise of college coaches about the freshman.

“They can’t recruit her yet, but they know about her and they like her,” Drabecki said.

Crystal Diaz, a junior, will also pitch for the Bulldogs (12-15 a season ago).

Burbank returns Katie Hooper who had the best offensive numbers in the league last season. Hooper hit .539 and had 48 hits in 27 games. She also hit nine home runs, seven triples and drove in 45 runs. The junior gave-up soccer to focus on her development as a softball prospect.

Senior second basemen Nelani Hernandez and junior shortstop Liano Do are other key pieces for Burbank this season. 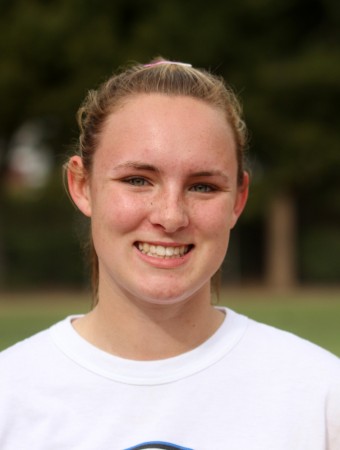 In addition Burbank has three freshmen in addition to Brooks on the varsity roster and at least three will be full-time starters. Two of those freshmen, Jazmin Orozco and Bridgette Pisa will rotate at catcher. Lily Winn, the fourth freshmen, will play third base.

Drabecki believes a winter schedule against top teams like Oaks Christian and Upland will only help build confidence and consistency in a young team led by a talented junior and freshmen classes.

What could stop the Bulldogs? Only themselves, Drabecki says.

“Frankly, kids from the city of Burbank often choke,” she says. “They aren’t use to top competition because they don’t typically have a lot of experience in competitive youth leagues or travel ball.

But I believe in this team, I am confident that they are going to go out and do what they are capable of doing,” Drabecki says.

In addition, linebacker Kody Jensen was also selected. It is the most players the Indians have had named to the All CIF team since 2006. This season the trio helped guide the Indians to a third straight Pacific League Champioship.

Anding rushed for 2,686 yards and scored a total of 30 touchdowns this past season in just 10 games.  He averaged over 13 yards per carry and almost 300 yards a game, however he spent most of his postgame interviews deflecting credit to his offensive line.

The selection of Ferrat is some confirmation that Anding’s words were much more than lip service. For his part, Ferrat spent much of the season manhandling and pancaking defenders.

Jensen had 40 tackles and 3.5 sacks , somewhat modest numbers for an All-CIF selection, but Burroughs coach Keith Knoop, the Pacific League representative at the All-CIF selection meeting, stressed there was a huge difference in his defense when Jensen was in the line-up than when he was not. Jensen was ineligible the first three games of the season.

“He made a big difference for us, indicated by our performance,” Knoop said.

Burbank High boys’ basketball got back on track with a pair of crucial league wins to move to 10-9 overall and 2-4 in Pacific League play. Burroughs fell to 0-6 in league and all but officially out of the playoff chase.

Burbank Adult School in partnership with the Burbank Unified School District will offer a limited number of online high school classes to high school sophomores, juniors, and seniors during the Spring 2012 semester. Classes will be offered on a first-come, first-served basis and will be exclusively offered to students in need of grade improvement only. The classes offered will be:

THE RETURN OF THE CHIEF

The most intriguing part of the soccer season set to kickoff is the return of Burroughs High legend, Mike Kodama. Kodama coached the Tribe for 22 seasons, won five Foothill League titles, two Pacific League titles, brought the school to its only CIF SS Championship game in its history in 1994 and became an inductee into the school’s Hall of Fame in 2009.

Kodama’s career mark of 244-110 will never be eclipsed. It’s the high school soccer equivalent to win Joe Gibbs returned to coach my NFL team, the Washington Redskins, after an 11 year hiatus. Granted, Kodama hasn’t been away from the game for nearly as long, but the return of a coach of his pedigree just doesn’t happen at this level.

Who better than to sculpt a team made-up of largely sophomores after the team graduated 11 seniors from its roster a year ago. Burroughs was 9-3-3 in league last season.

Senior Anthony Monroy’s placed 31st at the state meet on November 26 with a mark of 15:50 in a 5k at Woodward Park in Fresno, CA. Monroy earned the honor of attending the meet for the second straight year by finishing 6th in the CIF Southern Section Finals on November 18.

Burroughs Boys’ Basketball tips-off its 2011-2012 campaign on December 6 in a tournament at Pasadena Poly. Burbank High is off to a 2-0 start in its own tournament, having topped San Marcos, 56-53, on November 30. The Bulldogs routed Monroe, 99-35 in their opener.

A sold out gym at Burroughs watched the Bulldogs lead from the opening tip off. (Photo By Steven J. Lynch)

Burbank High's #23 (G) Austin Pope, takes the ball down the court past the Indian's #13, David Shaw to score another basket for the Bulldogs. Pope had 15 points on the night for Burbank. (Photo By Steven J. Lynch)