Only a few writers are in the elite ranks of being their own top competition. ELIZABETH SARNOFF (Lost, Deadwood, Alcatraz) is one of them. In 2005, both Lost and Deadwood were nominated for the Writers Guild of America Award for Best Dramatic Series. (Lost won.) But perhaps being multitalented (writer, director, producer, actor and bass-playing musician) has something to do with it.

Just prior to being the writer/director for Slow Dance, Elizabeth had served as the Co-Creator and Executive Producer of the Fox television sensation, Alcatraz.  BNB’s Greg Simay caught up with her at the opening night party at La Loggia. 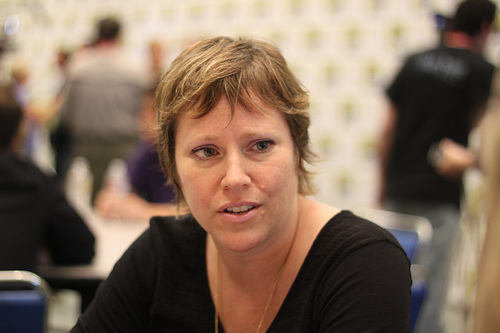 Q: How did you handle being the writer and the director for Slow Dance In Midtown? Does the “writer” part of you quarrel with the “director” part?

ES: I think the two roles blend. And it’s wonderful to have a thought and not have it run the gauntlet of being re-interpreted by a dozen different people. It’s a liberation!

Q: During the play, I really enjoyed the eloquent-but-natural dialogue. It reminded me of [the critically-acclaimed HBO Western] Deadwood.

ES: Well, my Dad talked that way, so it seemed very natural to me. And working with a fantastic mentor and writer like David Milch really helped me tap into the all the wonderful ways with words I heard growing up.

Q: You certainly didn’t need a play to put yourself on the map.

ES: Slow Dance In Midtown was totally a labor of love. I wrote it (back in 2000) at a painful time of my life, and I was dealing with loss and betrayal like the characters in my play. And last November I had quit the show (Alcatraz) that I had created, and was looking for a new creative direction. And then came the opportunity to direct Slow Dance In Midtown.