Thinking big and reaching the CIF Southern Section playoffs are the goals for the Burroughs High and Burbank boys’ water polo teams.

Both are very capable, but there is one key difference and that is the Indians have recently been there, while the Bulldogs haven’t.

Burroughs is coming off a 13-13 campaign and a first-round defeat in the playoffs, but Coach Jacob Cook likes what he sees because many on the team are seniors.

On the negative side, 13 players have graduated including David Arakelyan, the team’s leading scorer.

There are six juniors and they include Chet Conlan, Jon Paul De Fabry, Matthew Mucha, Sammy Lazaar, Tobey Ho and Vahagan Sahakyan while the rest of the team consists of sophomore Orion Hernandez and freshman Xavier Turla.

“We lost 13 seniors from last year,” Cook said. “We have a very young team, but we have a very committed and hard working team. These guys are really committed to bettering themselves and learning to play with each other.”

In order to compensate, Cook said that he will instill hard work and also the basics. “We’re going back to the fundamentals,” he said.

Burroughs has played two matches and is winless. The Indians will open Pacific League play at Crescenta Valley on Sept. 25 and will host Burbank on Oct. 17.

Chances are decent that Burbank, which is 1-1 this season and will begin league action at Pasadena on Sept. 25, will fare better this year than the previous.

“I expect that we will do a lot better than last,” Burbank coach Allyson Young said. “Hopefully in the top four.”

Young said that she is basing the projection on being better prepared and diligent. “This year all of my guys are working hard and want to succeed,” she said. “We’ve got good players for both offense and defense.”

Young then added: “I like that this team is already working hard and wants to continue the hard work. This is a team sport, so they need everyone to be willing to give it their all,” she noted.

Young’s target is also the postseason. “We believe that this year we can make playoffs and that is what we are aiming for,” she said.

In 2017, the Bulldogs defeated Pasadena and Glendale in league play and this year’s leaders are senior Varuzhan Bilbulyan, senior Artush Gasparyan and freshman Johnny Agazaryon.

Young feels confident that these three will play well, along with the rest of the team. “A lot of my other guys are ready to step up and show what they’ve got,” she said.

Under favorable weather conditions, the Pacific League swimming finals was held at Burbank High on Thursday and the team standings and individual races went essentially according to form.

Two league records fell as Burroughs sophomore Maya Wilson placed first in the 200 yard freestyle after coming in at 1.51.73.

Wilson placed first in the 500 freestyle (4.59.15) and was part of a foursome that took fourth in the 400 freestyle relay (4.03.62) that included senior Marlena Skrabak, senior Bianca Sanchez and junior Aleah Orozco. 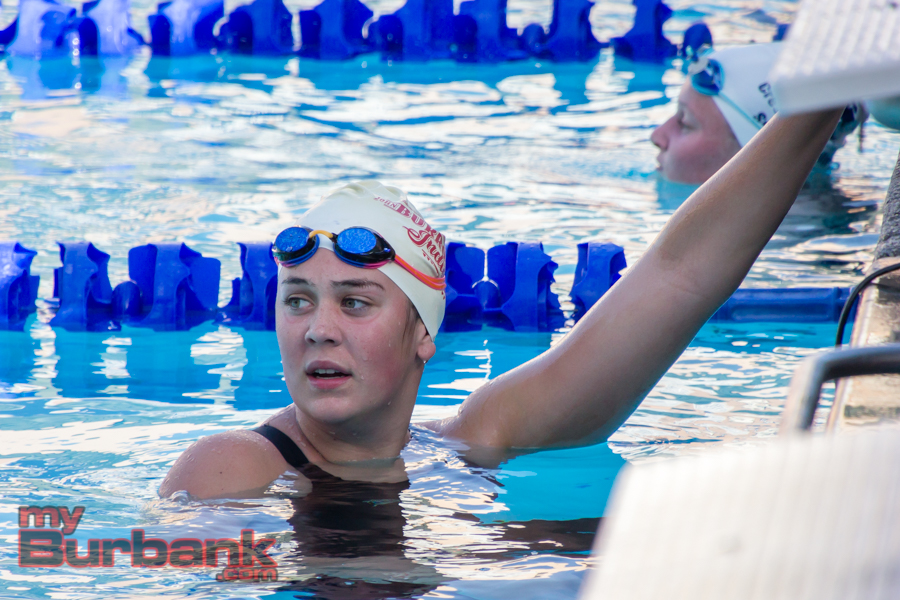 Wilson was on the team that garnered fourth in the 200 medley relay (2.06.71) that included senior Annabelle Morning, Skrabak and sophomore Emmanuella Nathan.

“I went in trying to have no expectations,” Wilson said of her day in the pool. “I was just trying to improve, whether it was my times or my mindset. After I finished, it was a moment of relief.”

Wilson then added: “Working in practice every day. Seeing if I can improve every day. I try to stay in the moment and focus on the now,” she noted. “I focus on how I can improve my race. I’m focusing on CIF and see what I can do. I’m pushing myself to new limits in all my practices or trying to.”

Burbank sophomore David Lee also had a day to remember and was another double winner after taking first place in the 50 freestyle (23.05) and the 100 freestyle (50.17). 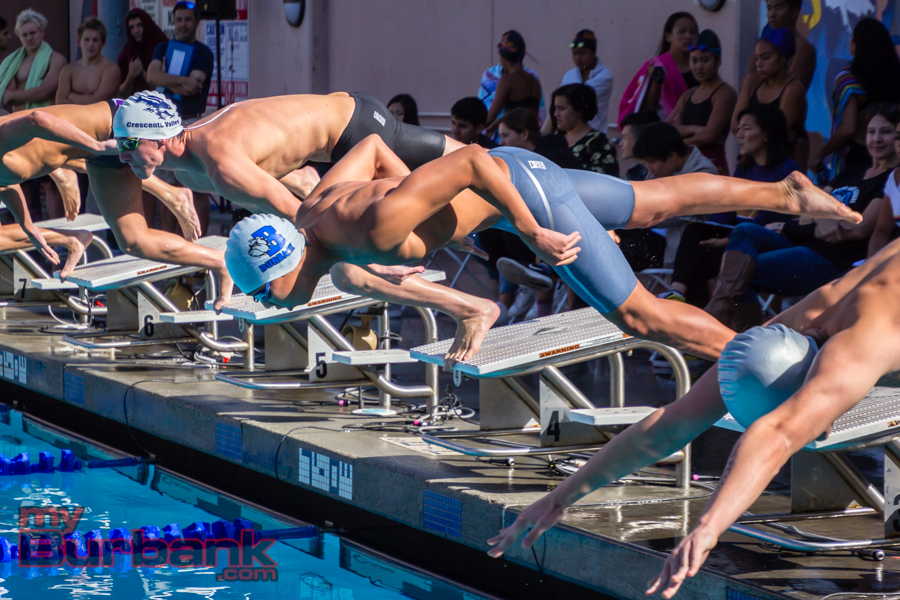 As far as team standings, the Burroughs girls’ varsity placed third with 196 points while Burbank was fifth (173 points).

“We had mostly all best times today,” Burbank coach Cody Parker said of his teams. “Obviously we had David Lee win two individual events and the boys’ 200 individual medley got consideration. So there’s a lot to be proud of as a team.”

Burroughs coach Jacob Cook was pleased with Wilson. “Maya is very impressive,” he noted. “Maya did some incredible stuff. She puts in the work. Her talent is just insane. She’s special. I just told her before the race, to go for it.”

Cook spoke about his teams. “There’s a lot of PR’s today,” he said. “A win for me is not just scores, but it’s to beat individual times.” 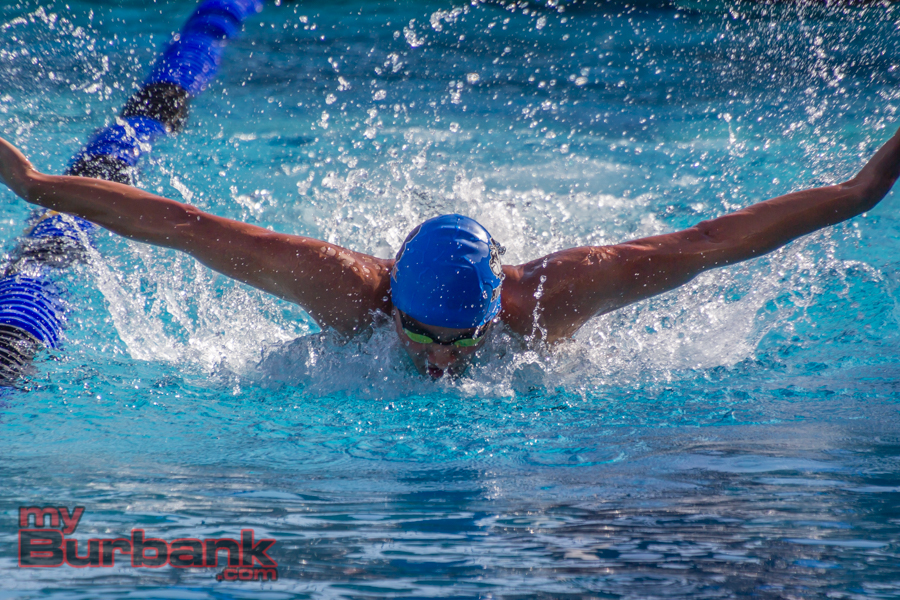 That’s perfect form in the butterfly. Photo By: Edward Tovmassian 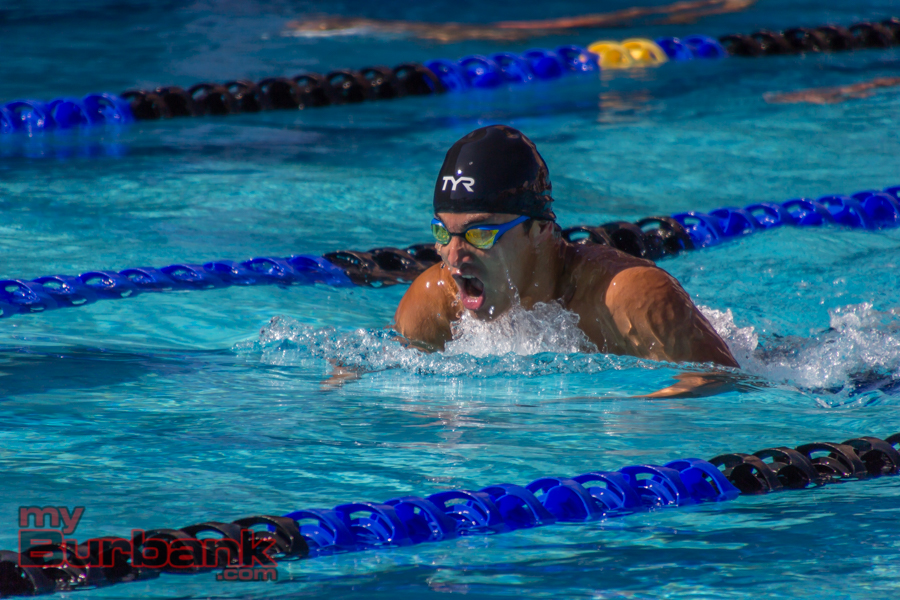 It takes skill, training and determination to succeed as Burbank and Burroughs demonstrated at the Pacific League Finals. Photo By: Edward Tovmassian 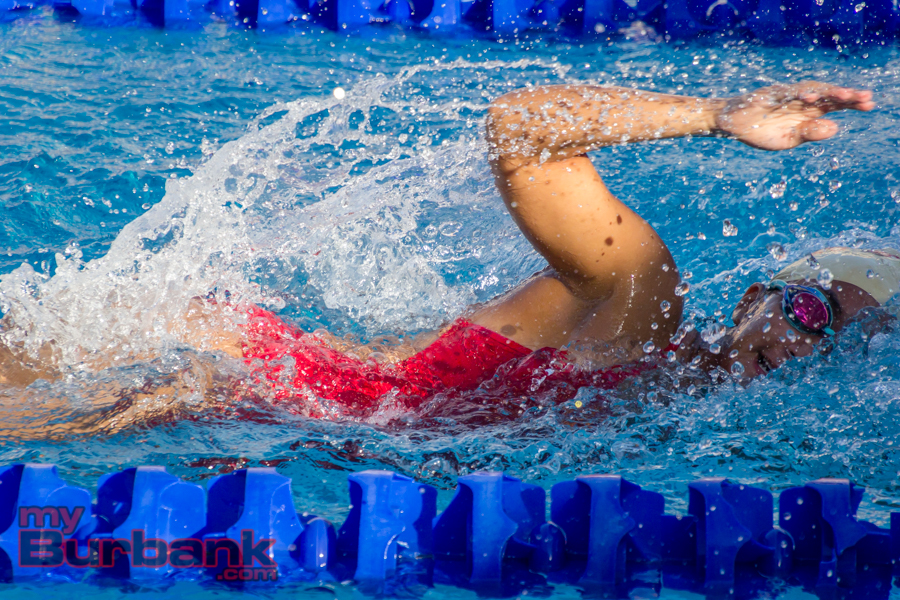 Here’s a Burroughs swimmer giving it her all. Photo By: Edward Tovmassian