Burbank High had intended to bring Cariani’s well-known play Almost, Maine to the Colony Theatre stage last Spring. The Drama program was in the dress rehearsal stage, about to open the play, when Burbank Unified shut down school because of the COVID-19 pandemic.

“Almost, Maine is a beautiful play about love and understanding one another,” explained Glover. “While originally playing on Broadway in the mid-2000s, it has become the most produced high school play in the U.S. over the past three years.” 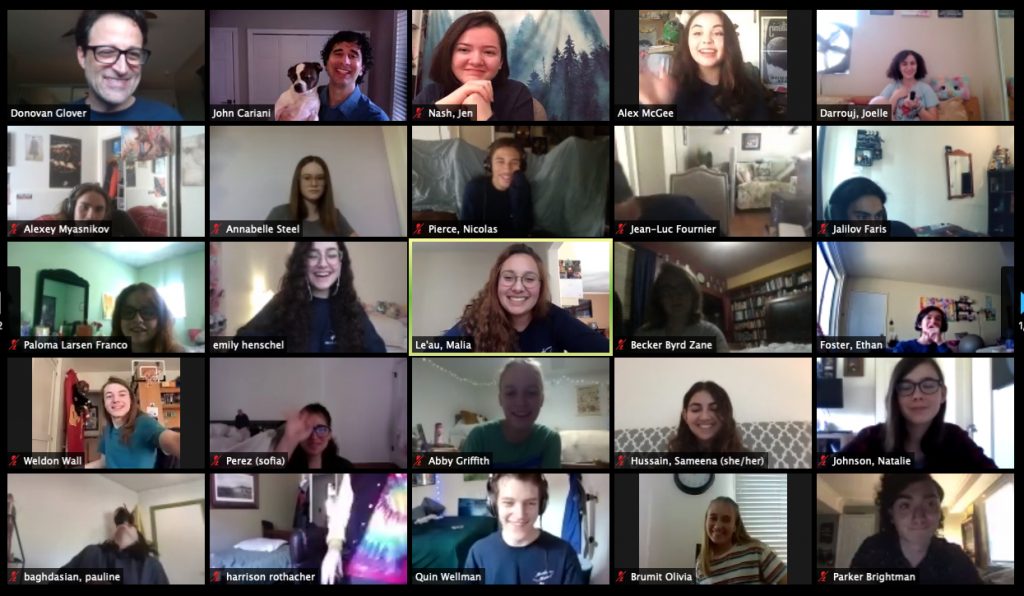 For 90 minutes, Cariani talked about his experiences and thoughts, how he works as a playwright, the value of feedback and in person engagement, how the pandemic has affected him and people he knows. He also answered questions students had about themes in Almost, Maine.

The pandemic “has taught me that I need time to think and read,” Cariani said, noting that he realized pre-pandemic he was rushing about and not making time to grow as a person or to have down time to reflect.

He was very clear that obstacles to realizing one’s goals are very common, “Get used to obstacles.”

“You’re gonna find the people who do care if you don’t quit,” he also said.

Cariani also emphasized the importance of constructive feedback and opening one’s self up to criticism, “Something magical happens when people meet each other.”

His advice for the students? “Take this time to think about ‘what do I want to do? What am I passionate about?’ Don’t lie to yourself.” 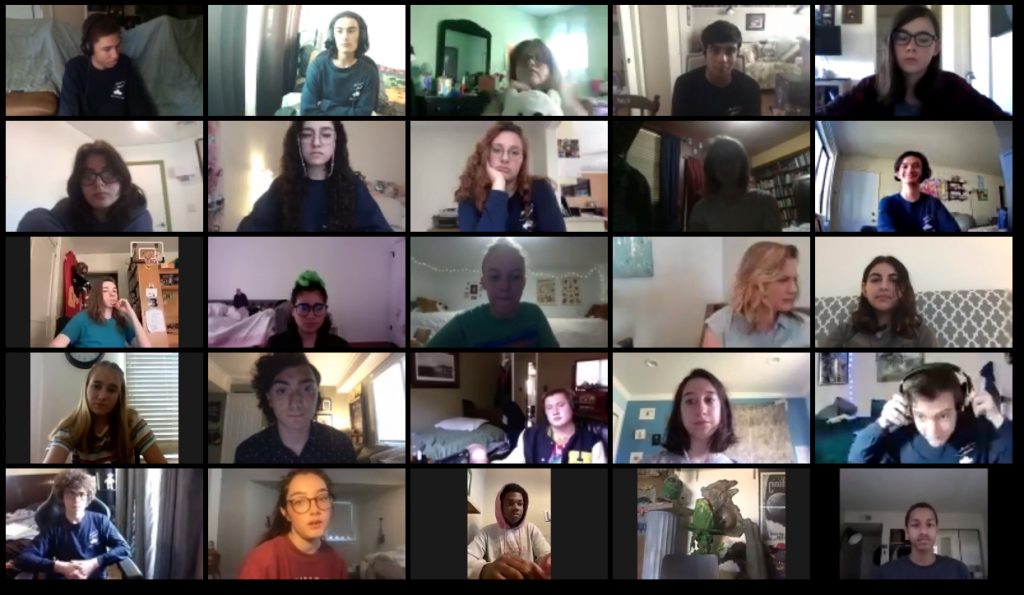 Cariani characterized his work as “love stories for not hot people,” after explaining his background as a character actor and that he was really interested in telling stories about regular people with regular jobs and lives.

Even as an established playwright now, he underlined the importance of exercising the skill, mentioning that he always writes for at least two minutes every morning. Sometimes it turns into a whole day of writing, sometimes it doesn’t.

As an artist, “you have to put in the work to maintain the skills you want to retain,” he said.

“I thought Mr. Cariani’s visit with the Play-Pro students was fantastic,” commented Glover. “He had so much information to share with the students – about playwriting and acting, regarding the trials and tribulations of making it as a young artist,  and even just some positive, philosophical approaches to take in life.”

“I’d asked each student to research his work, and come prepared with at least two questions. Poor things – most couldn’t get one question out. Nevertheless, they were all drinking up all he had to say. We went on for an hour and a half, and then I had to finally call an end to it,” Glover added. “John would’ve probably kept going, but I didn’t want to take advantage of his time and caring. He really does seem to genuinely care. Of course, my young, creative students need that. Most of them hung out after, thrilled about the experience.” 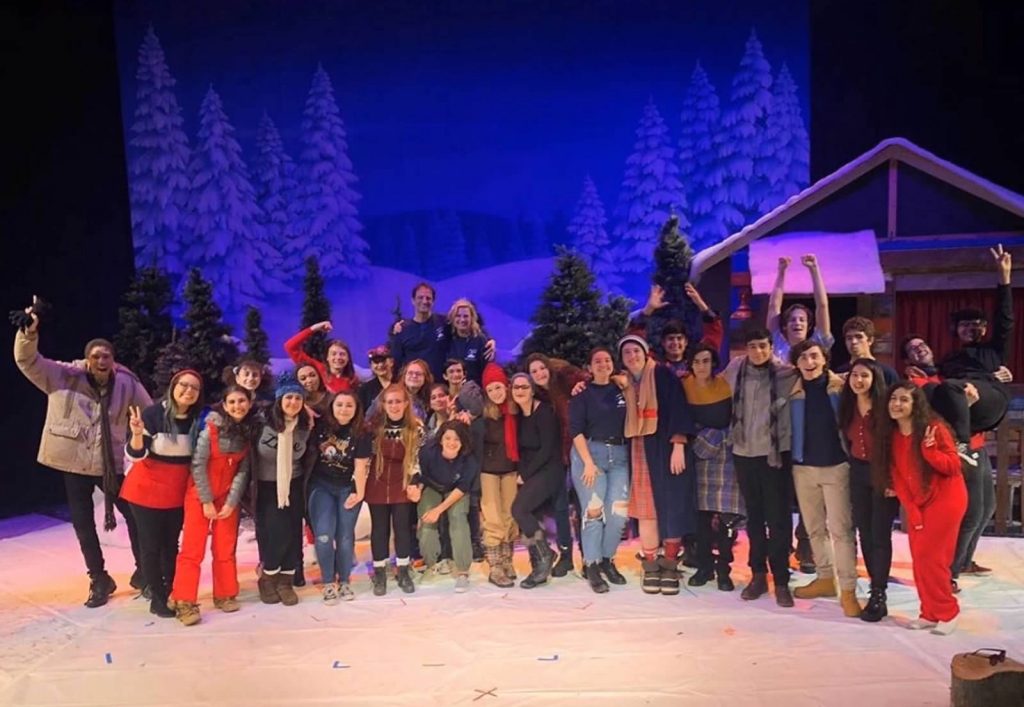 The cast of Burbank High’s “Almost, Maine” in March 2020, just before their production was cut short by COVID-19 closures. (Photo Courtesy Donovan Glover)

“I was really thankful for the opportunity to be a part of the Zoom call because I got to hear from an industry professional and listen to his perspective and his experiences working as a writer and an actor,” said senior Joelle Darrouj, who was on the costume/prop team for Almost, Maine and has been in the Drama program for three years.

“When being tasked with a creative project, I am a person that tends to get stuck in my head and my vision of things, and one eye-opening reminder I received from Mr. Cariani was the importance of listening to others and their opinions and experiences about things.”

“Though I may not always be inclined to agree to their ideas, sometimes what someone else comes up with will be much better than something that I came up with,” Darrouj, a writer and theater producer, also said. 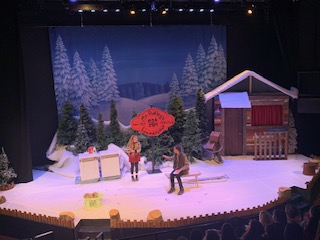 “It was interesting to hear from Mr. Cariani and to hear his views and opinions on things! As an actor and writer, it was really cool to hear about the process it takes for him to build the characters and situations that we end up performing in the shows,” commented senior Malia Le’au, who’s been in Drama for four years.

“Specifically when he brought up the scene ‘They Fell’ in his play Almost, Maine, he talked about writing the scene with both male and female characters, he touched on the difference in the scripts and the way things were said or presented, because not everything would’ve translated perfectly into the other genders perspective.”

“It was awesome to learn more about that scene, especially since that would’ve been the scene I was in if COVID-19 hadn’t halted our performance. He also spoke about his experience on Broadway, while Almost, Maine was being performed for the first time,” Le’au continued. “It was inspiring to hear about the multiple successes he had all at once, and insightful to hear about how he dealt with it.”

“Mr. Cariani gave us some super helpful information on the creative process. He assured the class that writers block is more of a constant than a mood; that writing might not always be easy or fun,” said senior Brandon Wilson, who’s been in the Drama program for four years. “That being said, he also made it clear that if you want to be a writer, you have to actually write, gifting us the advice of writing for at least a few minutes every day.”

“He additionally gave us a privileged opportunity to look at his ‘writing wall,’ a wall covered with poster paper, each full of segments of a story he’s piecing together,” Wilson also said. “These factors make it clear that Cariani knows his craft incredibly well, and we are lucky to have had the interview.”

What’s next for students in Play Production, operating as they are with remote learning?

“We are planning to create a digital sketch comedy show (a la SNL or Mad TV),” explained Glover. “For the Spring, I’m not sure yet. If we return to live instruction, we’ll likely put on our student-directed, student-written One-Act Festival, as well as a major play production.”

The cast of Burbank High’s “Almost, Maine” in March 2020, just before their production was cut short by COVID-19 closures. (Photo Courtesy Donovan Glover)