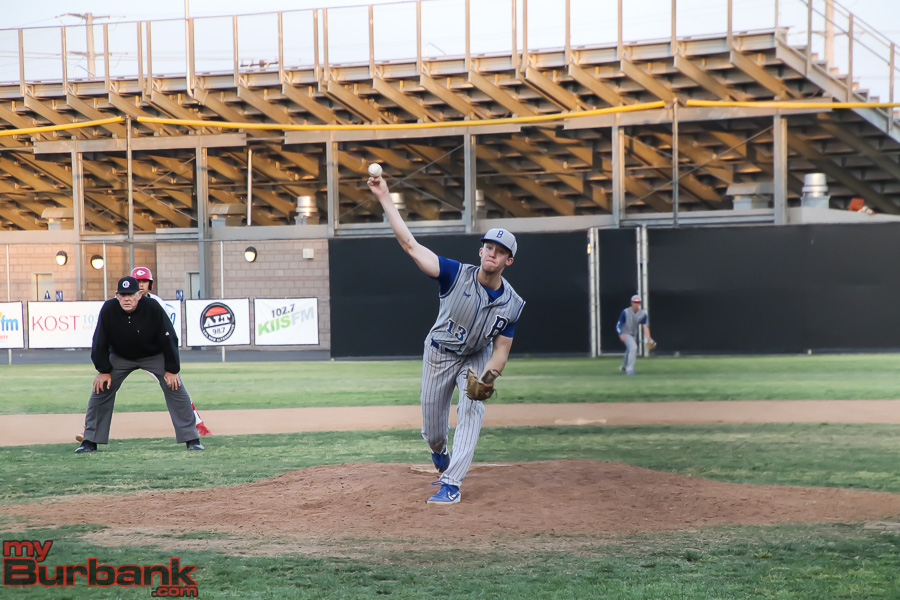 Davis Mieliwocki went five innings and collected the win as Burbank prevailed 10-3 over Burroughs. (Photo by Ross A. Benson) 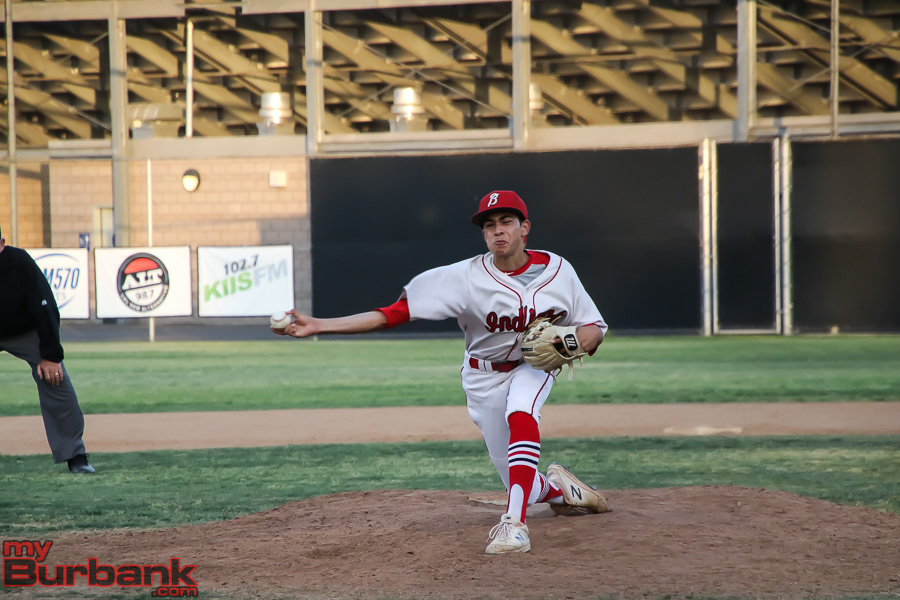 Xavier Dubon was one of seven pitchers used by the Indians. (Photo by Ross A. Benson) 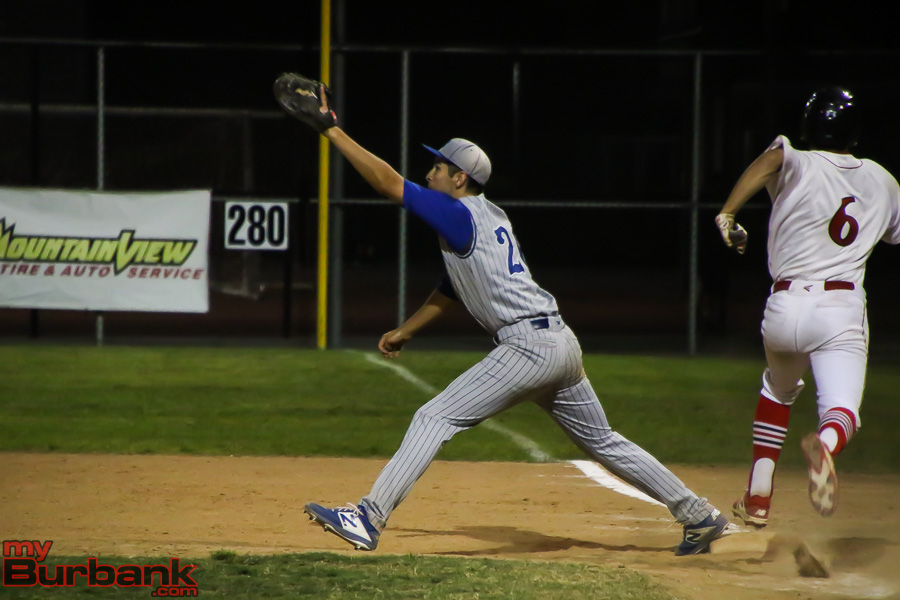 Jakob Duarte stretches at first base as Nicco Chuidian runs hard. (Photo by Ross A. Benson) 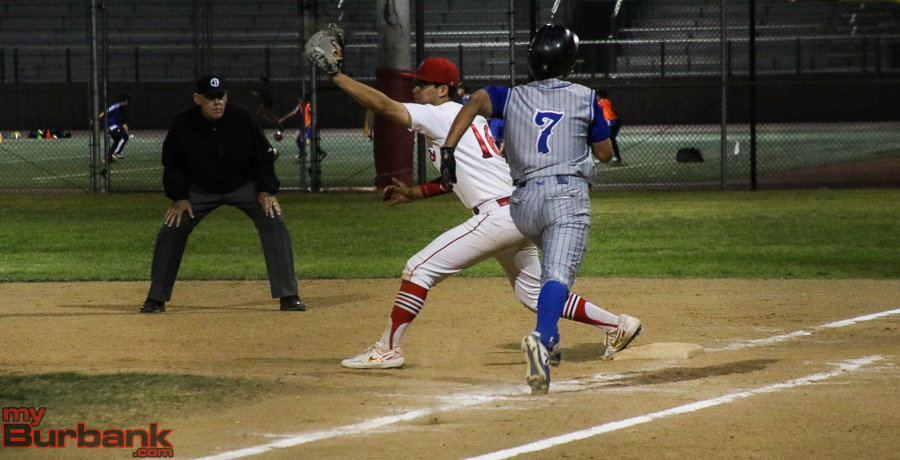 Aidan Gonzalez motors down the line as Collin Johnson readies for the catch. (Photo by Ross A. Benson) 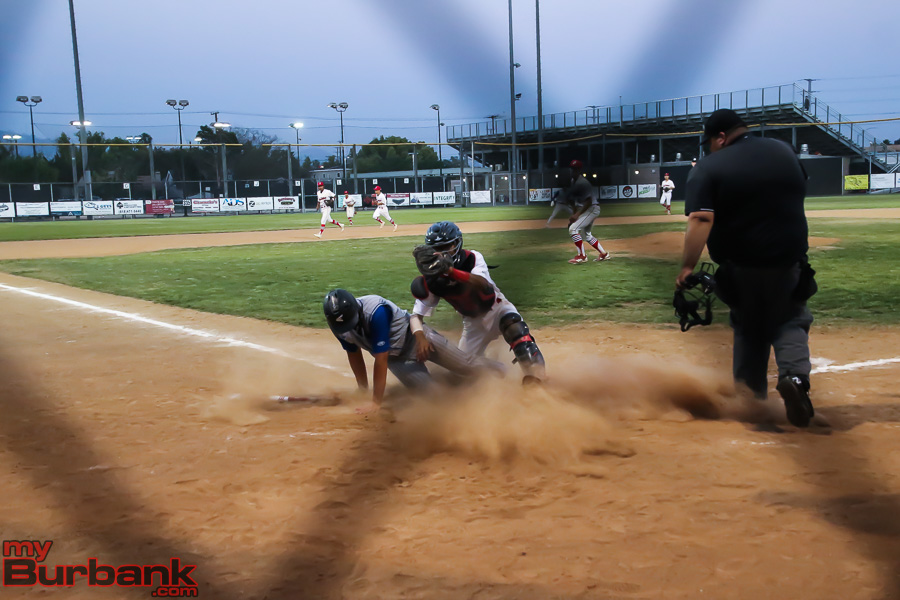 In a cloud of dust, the Bulldogs score a run in a 10-3 victory over the Indians. (Photo by Ross A. Benson) 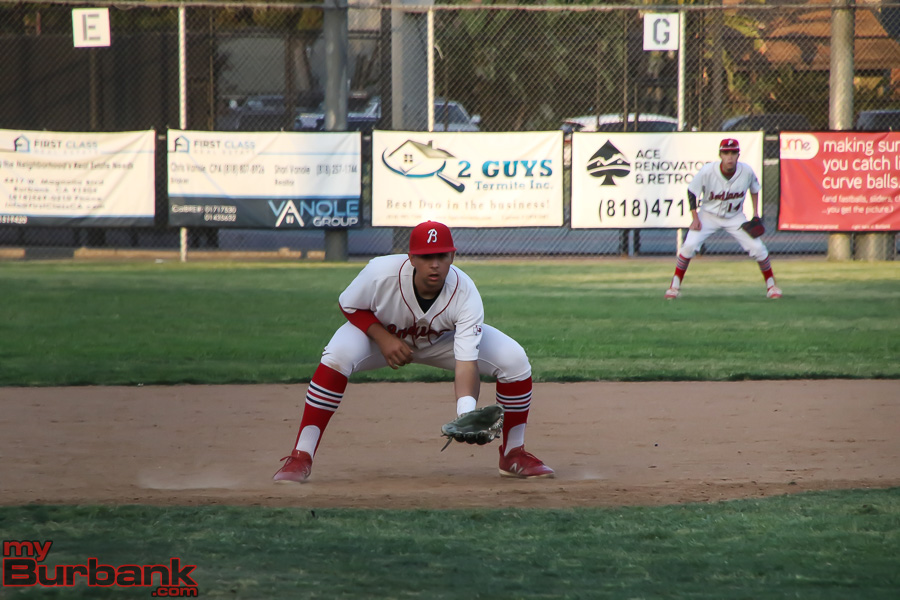 Neither visiting Burbank or Burroughs played stellar defense. (Photo by Ross A. Benson)

Though the Pacific League hasn’t yet begun, it’s highly likely the Burroughs High and Burbank baseball teams will probably qualify for the CIF Southern Section playoffs.

The Indians and Bulldogs have deep and capable pitching staffs, which is a key factor in having a winning season. 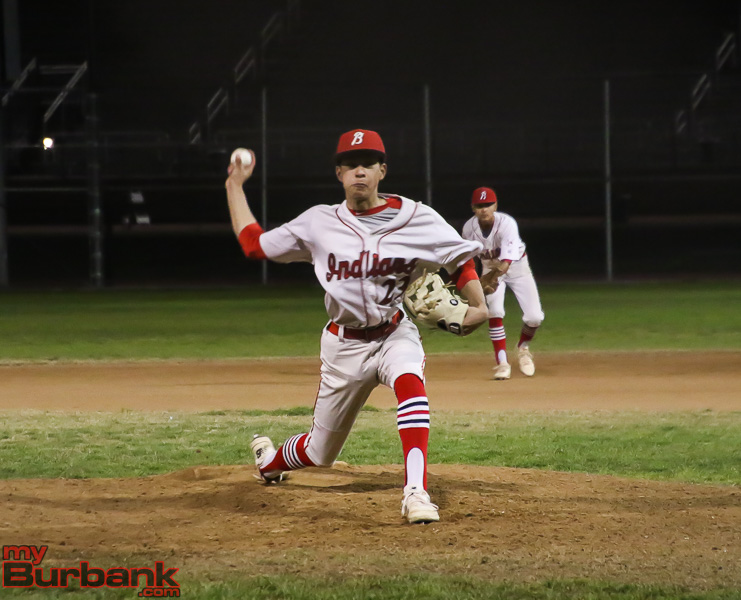 One of Burroughs’ strengths will be its pitching staff, which boasts a dozen hurlers. (Photo by Ross A. Benson)

Burroughs, which is looking to make the playoffs for a fifth straight year, has a dozen pitchers on the staff and all are capable of performing at a high level.

“This is one of our team strengths this year with 12 players able to toss the ball,” longtime Burroughs coach Craig Sherwood said. “While no one pitcher is dominant, there is a staff of very capable pitchers as well as situational pitchers that will be called upon constantly to get outs in big situations.”

If there is an ace it would be senior and three-year starter Nicco Chuidian, while last year’s Pacific League Pitcher of the Year, Xavier Dubon, is a submarine specialist and very effective.

If the Indians are in front and it’s late in the game, the closer and set-up men will be seniors Andres Salazar and Julian Jaramillo. 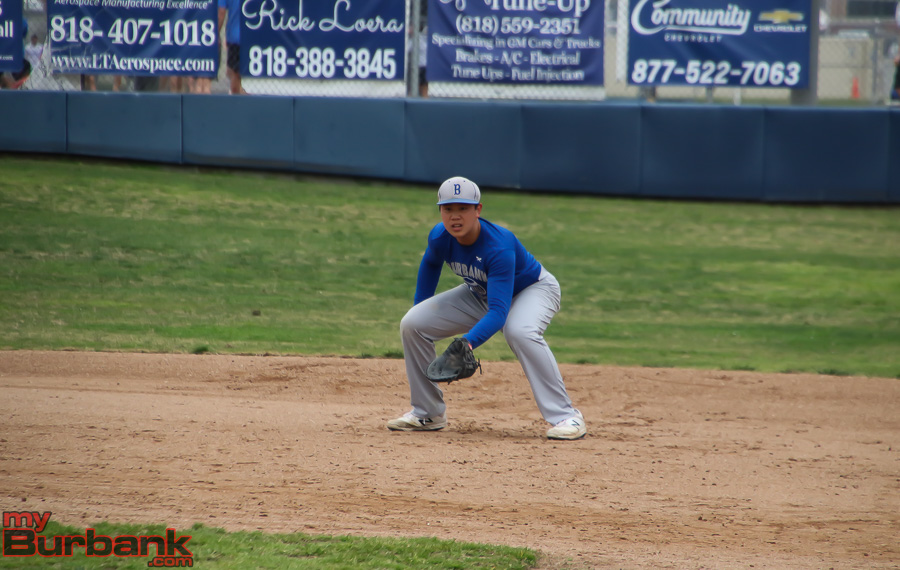 Burbank works on its defensive prowess. Defense and pitching will be two keys to success. (Photo by Ross A. Benson)

The Indians participated in three preseason tourneys and they include the prestigious Easton Tournament, which is loaded with talented teams, the Lancaster Rotary West Tournament hosted by Quartz Hill High and the Coach Bob Tournament in Arizona.

The Indians are 2-6, with a 6-5 decision over Lancaster in the Lancaster Rotary West tourney and an 8-1 triumph over Highland in the Quartz Hill tourney.

It’s a close one at first base when the Indians played a recent game against St. Francis. (Photo by Ross A. Benson)

Burroughs will open the league portion with a game at Hoover on March 8.

Behind the plate will be sophomore James Turner and will be supported by junior Albert Prado.

Senior Collin Johnson will play first base, bat in the No. 3 hole and also packs a potent stick.

Johnson, who swings lefthanded, is a power hitter who hits for a high average and will be backed up by senior Chris Magoon.

Second base will be a strong battle between junior Devon Esquivel and senior Preston Lemus, a transfer from Arizona. 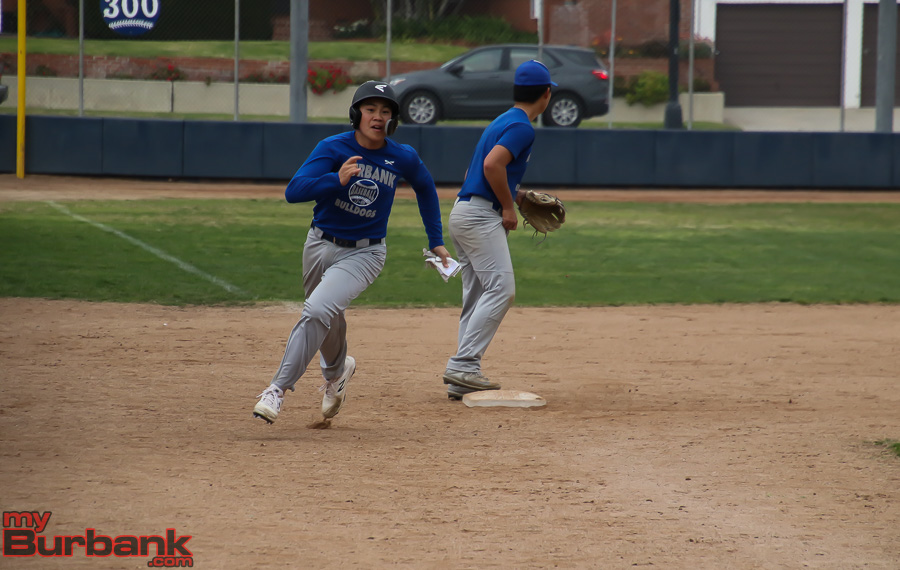 Burbank Coach Bob Hart hopes to see a lot of runs and hits during the season. (Photo by Ross A. Benson)

When Jaramillo isn’t on the mound, he will toil at third base and will be backed up by junior Hyatt Entz, who played on the boys’ soccer team.

Brian Garcia, a junior all-league pick, will hold down shortstop and bat leadoff for the Indians.

Junior Jorge Gutierrez, who is capable of playing second base and third base, will also see action at shortstop.

Chuidian will play center field when not on the hill and backed up by Salazar and Le.

The rest of the outfield consists of seniors Dylan Rolando and Rio Lopez, and juniors Kevin Gutierrez and Ho.

The utility infielders are seniors Daniel Roman and Hoover transfer Christian Morales, while junior Angel can play in the infield and outfield. 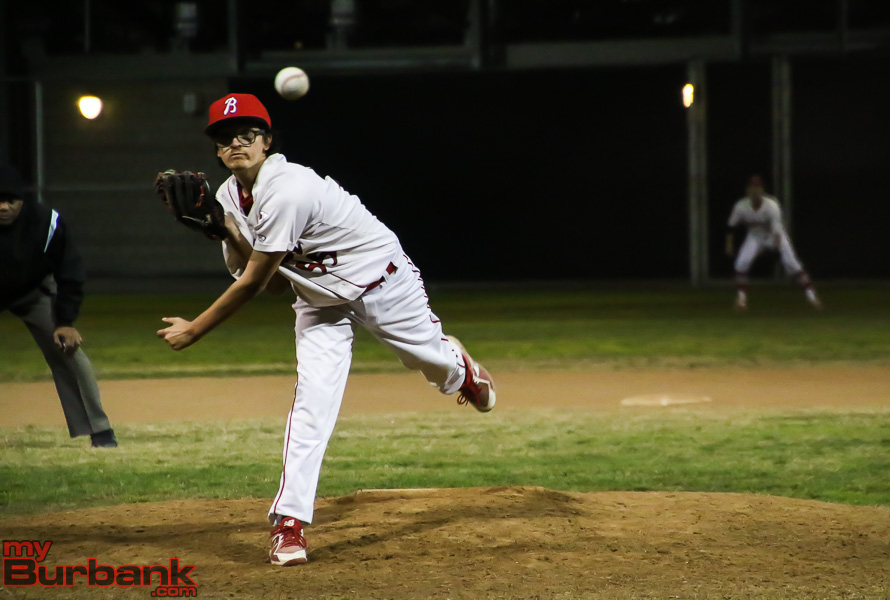 If pitching is crucial to winning, then the Indians are definitely ready. (Photo by Ross A Benson)

The Bulldogs failed to make the playoffs last season, but did advance to the quarterfinals in 2017.

“We have that challenge now,” Burbank coach Bob Hart said of getting back to the postseason. “But they’re going to have to find and accept their roles.”

Hart said despite an 0-3-1 record including a 5-0 loss to powerful Harvard-Westlake in the Easton Tournament, he’s optimistic.

“That was a very respectable game to a very good team,” Hart said of the Wolverines. “I think we’re going to be okay.”

Like its crosstown rival, Burbank, which also had a 3-3 tie against Chatsworth, commence the league season at Muir on March 5, will depend on pitching and will be paced by senior Davis Mieliwocki, who throws 85 to 87 miles per hour. 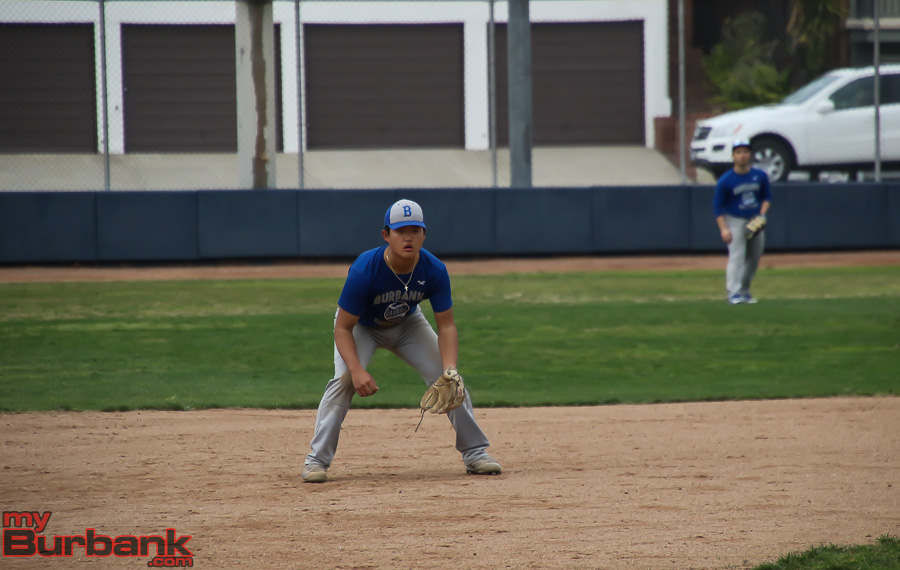 The Bulldogs can lean heavily on skill, experience and a solid pitching staff. (Photo by Ross A. Benson)

When not on the rubber, Mieliwocki, an all-league, second-team selection, is a steady and heady presence at third base.

Senior Joey Clark is also a key starter, while senior Andrew De La Torre, junior Jakob Duarte and sophomore Ryan King, who is the starting shortstop, will all need to be productive on the hill.

The rest of the pitching staff includes juniors Josh Balos, Willem Clendenin, while Troy Lee and King and Clark will be the primary closers.

The catching duties will primarily fall upon juniors Dominik Severo and Alberto Ayala.

The remainder of the outfield consists of seniors Cody Winters and Vincent Romano and juniors Justin Robinson and Adam Loera.