A Burbank man was killed Monday morning when he was crushed by a gravel truck. 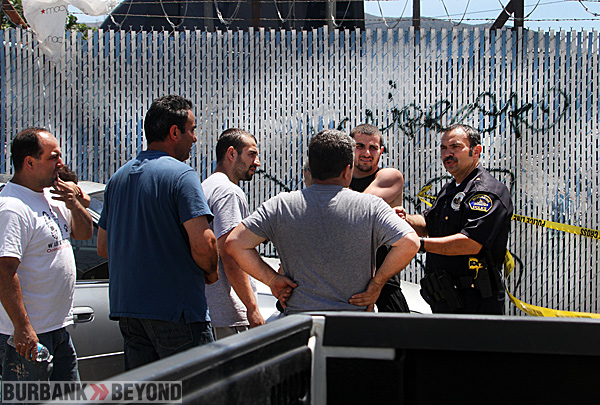 Burbank Police Officer Art Perez talks to victims friends and co workers, during the investigation. (Photo by Ross A. Benson)

Burbank Fire and Police units responded at 9:38 a.m. to the area next to the railroad tracks between Magnolia and Burbank Boulevards, for a report of an unconscious man with a truck on top of him.   When emergency crews arrived on scene the victim had been extricated from the truck by the driver of another truck who was working nearby.

According to police reports, the victim, Vigen Boodaghian, 58, of Burbank, had been trapped by the remote doors on the underside of the gravel truck’s trailer.   The injuries he received were fatal, and he was pronounced dead at the scene by paramedics.   The Los Angeles County Coroner’s office arrived on scene shortly after 2 p.m. to remove the body.

An investigation by the Burbank Police Department into the cause of the accident is on-going. 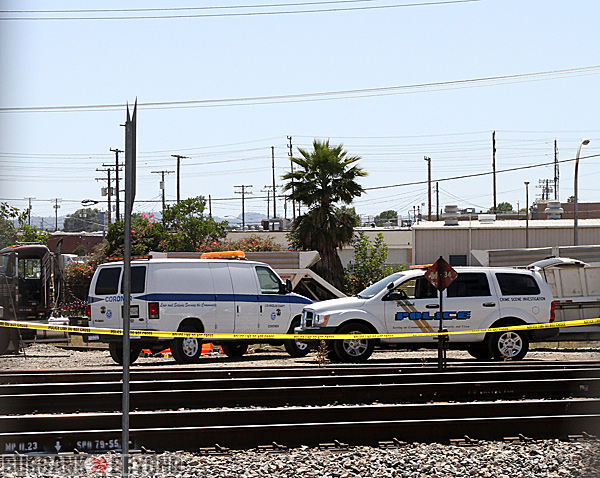 The Los Angeles Coroner arrives to remove the body of 58-year-old Vigen Boodaghian following a freak accident while working on a dump truck. (Photo by Ross A. Benson) 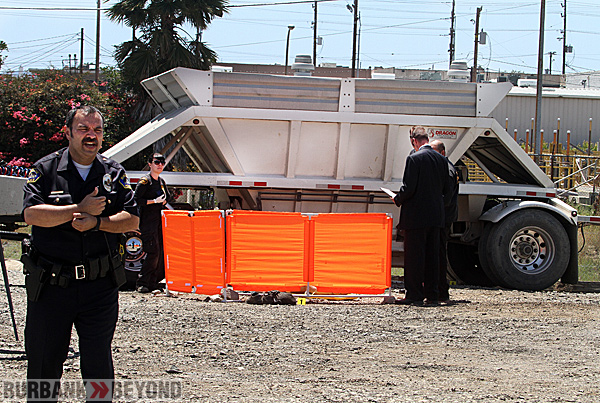 Burbank Police investigate the scene where 58-year-old Vigen Boodaghian was killed while working on this dump truck. (Photo by Ross A. Benson)

Burbank Police responded to the intersection of Olive Avenue & Griffith Park Drive at 8:17 pm, where they found a male had been struck in the eastbound lanes. 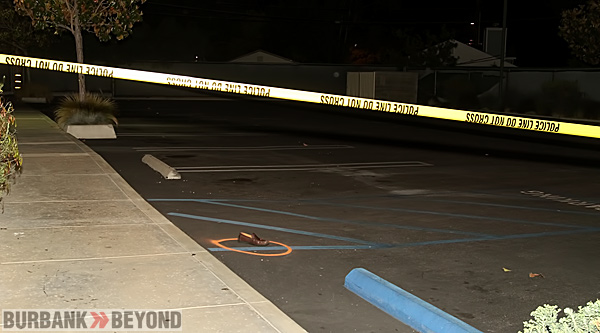 A shoe is marked as evidence where it landed following fatal accident. (Photo by Ross A. Benson)

The elderly woman driver of the car that struck the man was sitting in her car a few yards from the victim was lying in the street. Burbank Paramedics were on scene within minutes and attempted life saving procedures, and transported the male victim to Providence Saint Joseph Medical Center where he succumbed to his injuries.

Burbank Police later reported the victim as 101 year old Burbank resident Otto Jensen who’s Photography Studio on Olive Avenue was only a few feet from where he was struck.

The driver was not arrested pending further investigations by Burbank Police Traffic Dept. 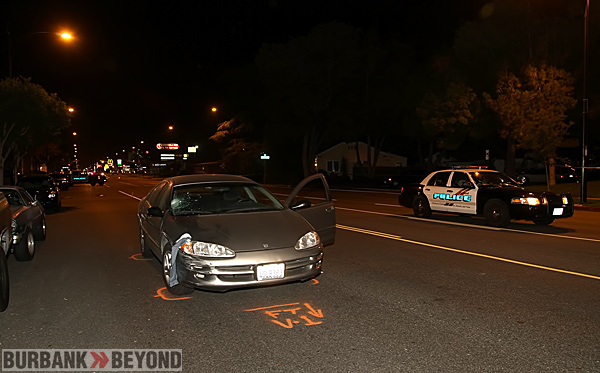 Accident scene where Burbank resident Otto Jenen was struck and killed only feet from his Photography Studio Tuesday evening. (Photo by Ross A. Benson)

Burbank Police were called shortly after 2 am on Tuesday morning, July 5, to

815 N. Valley Street to assist the Burbank Fire Department with a possible medical emergency.  Burbank Fire personnel pronounced 65 year-old Marie Brancato dead at the scene.
During the initial investigation, officers observed that the female victim had been bleeding profusely from what appeared to be a traumatic injury to the back of her head. Further investigation led to the arrest of the victim’s husband, identified as seventy-year-old Burbank resident Joseph Robert Brancato.

The case will be presented to the Los Angeles County District Attorney’s Office for filing consideration.

This is the first homicide in Burbank since April of 2009.

Burbank police begin their investigation shortly after 2 am after being called to 815 N. Valley by Paramedics who reported suspicious circumstances upon their arrival. (Photo By Ross A. Benson)