The Helpful Honda Guys made a stop in Burbank at noon on Friday, spreading a little happiness to some lucky motorists who were treated to nearly $500 worth of free gasoline at a local gas station.

Just before noon, the big blue gasoline tanker pulled up to the Kwik Serve Gas & Mart located on the corner of Victory Blvd. and Hollywood Way.   Station owner Chuck Helo, who has been in business on the corner for 28 years, was there to greet the arrival of the truck and the four-member team of Helpful Honda Guys (and girls).

The crew was only there for a scheduled 45-minute visit, in which time they were able to offer free gas to 15 lucky Honda owners.  A quick check of the first few cars in the line found that the drivers had heard about the gasoline give away from tweets put out by myBurbank.com. 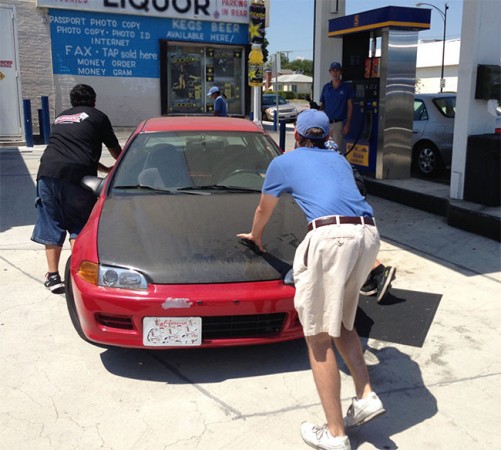 Robbie and Ron Perez get a little help from the Helpful Honda Guy pushing their 1994 Civic to the gas pump. (Photo by Stan Lynch)

Cindy Bernal was the first one in line.  She works just down the street from the gas station.  Burbank resident Mike Van Dam drove his Honda Fit, which he described as “running on fumes.”  Robbie Perez and his brother Ron had to push his 1994 Honda Civic to the pump.  It wasn’t out of gas, but apparently had a vapor lock caused by the heat from waiting in line for the free gas.

This was the third and final stop of the day for the Helpful Honda crew.  They had done similar gasoline give aways earlier in the day in Reseda and Woodland Hills.  According to crew leader Tami Horetski, Honda has been doing these events for the past 5 years.

“We do the free gasoline give aways for Honda drivers about two times a month between Memorial Day and Labor Day,” said Horetski, adding, “It’s our way of thanking our loyal Honda owners”

For truck driver Javier Marin of MJ Tank Lines, this was his third stop, before making his regular delivery run up to Camarillo.  The gasoline being given away actually came from the Kwik Serve’s pumps, and not from the big fuel truck wrapped in hard to miss bright blue advertisement for Honda.  Marin had to wait until the line of cars wrapped around the corner of Victory and Hollywood Way cleared out, before he could pull the truck onto the street and finish his work.

For those who were able to get the free gasoline, it was a great start to the long Labor Day weekend.   It almost made them forget about the weather that made this the “hottest” event in town today. 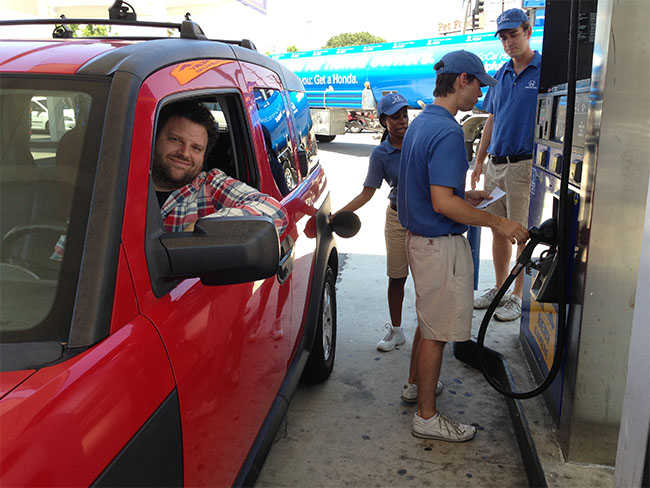 Mike Williamson of Burbank was all smiles as the Helpful Honda Guys got ready to pump free gasoline into his Honda Element. Mike heard about the give away by following us on Twitter. (Photo by Stan Lynch) 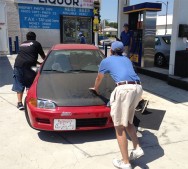