Pickwick Ice has been a landmark in Burbank since 1961, three years before The Beatles arrived in the United States.

Venerable and hugely popular, on Wednesday afternoon and before a large and appreciative crowd that included dignitaries such as Burbank Mayor Emily Gabel-Luddy, master of ceremonies and current Los Angeles Kings radio analyst Daryl Evans, and Kings left winger Kyle Clifford, the building had its grand reopening with a ribbon-cutting ceremony and will now be known as the Los Angeles Kings Ice At Pickwick Gardens. 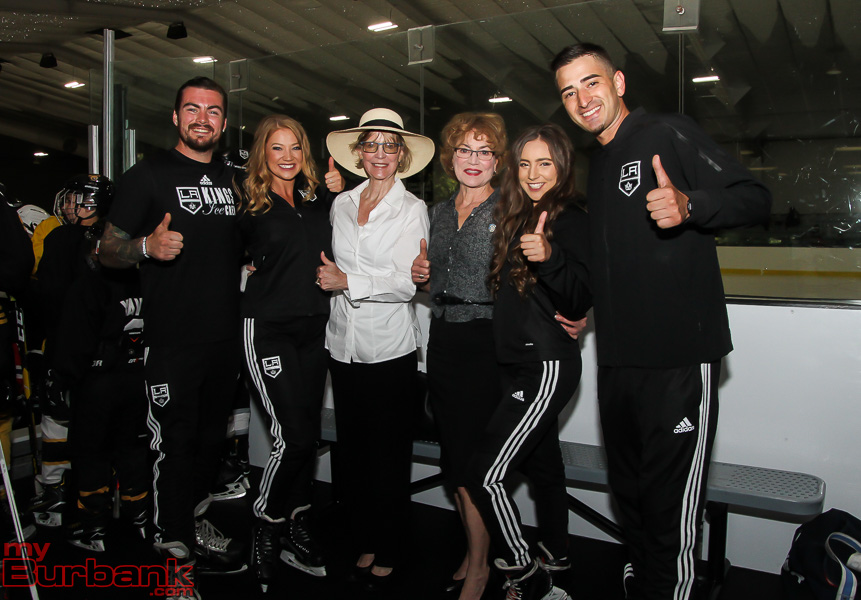 Eight months ago, the Kings and American Sports Entertainment Company announced the acquisition and operations of the facility, and agreed to a long-term partnership with Ron Stavert, the CEO of Pickwick Gardens, who cut the red ribbon with several young hockey players, both boys and girls, standing nearby.

“This is my grandfather’s dream. To have this stay in the family and be an important part of the community for generations,” Stavert said after the 45-minute ceremony. “The ice rink started off as a plumbing project. He was in the plumbing business, because it was pipes and tubes and refrigeration and it’s turned into an amazing facility with the Los Angeles Figure Skating Club and youth hockey with the Bears and adult hockey.”

Stavert said that the former Pickwick Ice has been popular in Burbank and the surrounding areas for years and hopes the new partnership with the Kings and ASEC will last for at least half a century.

“Not only does it build community in the city itself, but it draws from other communities outside and people come here and see how wonderful the area is and how safe it is,” he pointed out. 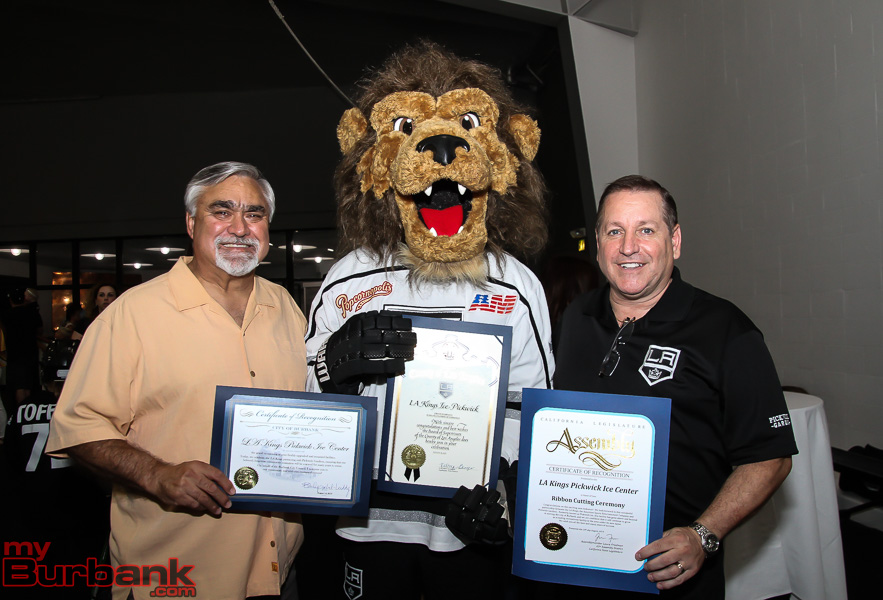 Everyone is showing off their certificate of recognition, including Bailey, the Los Angeles Kings mascot. (Photo by Ross A. Benson)

“That’s the goal,” he noted. “We have about 10 acres of land here. We have bowling, banquets, conferences, ice, weddings. We have the ability to do a lot of different things. The ice is a big part of it and it’s going to be a big part of it in the future.”

Because of the prohibitive cost to maintain the building, Stavert said there was a real possibility Pickwick Ice could eventually go under.

“It’s a very expensive asset,” he said. “We’re just a single operator and have been. There’s not 20 Pickwick’s out there. There’s only one. Capital is scarce and expensive and there was always a concern that there might come a day when the money’s not there. Our partnership now is secure for years to come. There’s a buzz now about Pickwick. The Kings are putting the name out there on radio and TV. I have friends all over the country who have heard about it.”

The 58-year-old facility was rebranded on the inside and outside with the Kings logo. 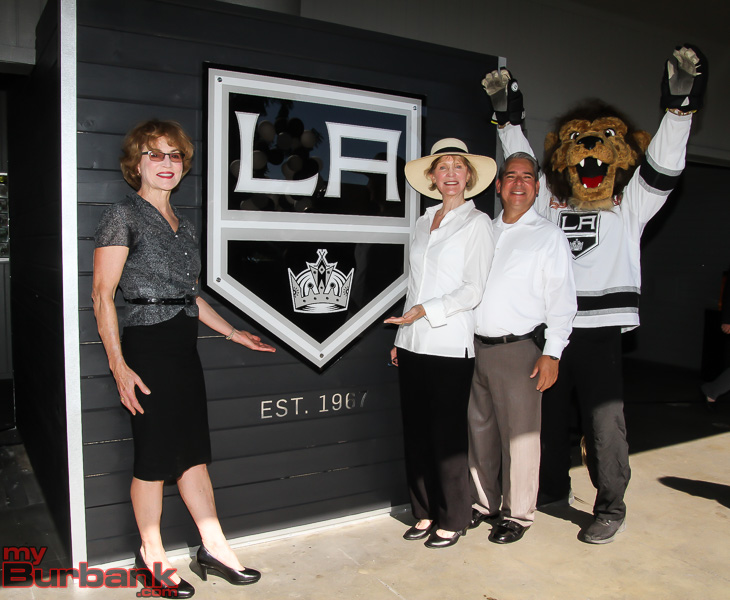 The Kings brand is everywhere in the former Pickwick Ice arena. (Photo by Ross A. Benson)

Clifford, a member of the two Kings Stanley Cup winners in 2012 and 2014, spoke to the crowd and said it’s nice to see so many youngsters attend the event.

“I came out 11 years ago to L.A., kind of a little bit before we made our big runs and just to see the impact of those two Stanley Cups, it’s had a huge ripple effect on youth hockey out here,” he said. “It’s great to see youth hockey. You’ve got a lot of young girls and a lot of young boys, and they’re with their teammates. It’s a lot of fun.”

Clifford was there along with his wife Paige, a onetime figure skater, and their three sons, who like hockey and attending Kings games.

A five-foot tall bobblehead of Bailey, the wildly popular Kings mascot stands in front of the ice rink.

For Wednesday’s ribbon-cutting ceremony, a real-life Bailey, a cute and cuddly lion, walked around and took pictures and slapped high fives with excited fans. 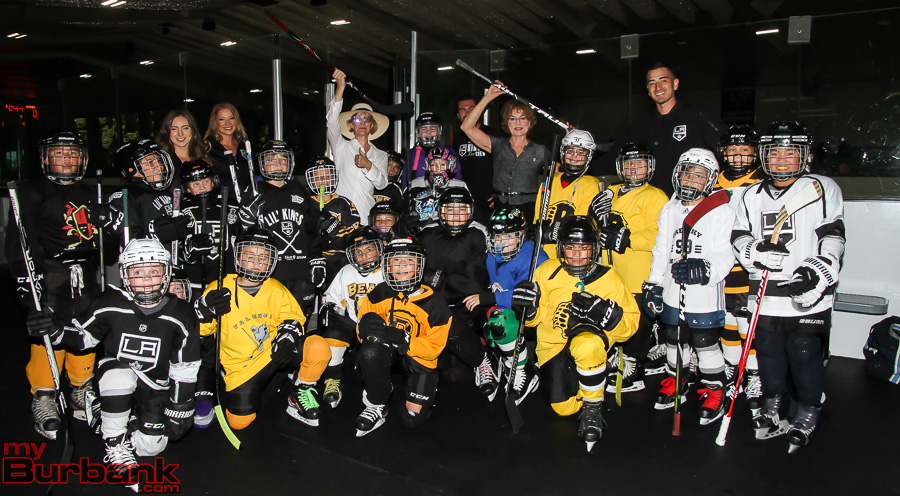 Young hockey players took the ice after the ribbon-cutting ceremony. (Photo by Ross A. Benson)

“Any time that you brand a facility like the Kings have here at Pickwick in Burbank, it’s historical, it’s monumental,” said Evans, who played for the Kings, the Washington Capitals and the Toronto Maple Leafs over a career that began in 1981 and ended in 1991. “There’s a big commitment from the Kings. It’s a great message that goes out to the community that they’re committed to not only keep what they have here, but to expand and grow it.”

Evans, who had one of the most famous goals ever for the Kings in Game 3 of a best of five playoff match with the Edmonton Oilers on April 10, 1982, dubbed “Miracle on Manchester” when he knocked in the game-winner in overtime after trailing 5-0 entering the third period and won 6-5, which is the largest deficit in NHL postseason history, then added: 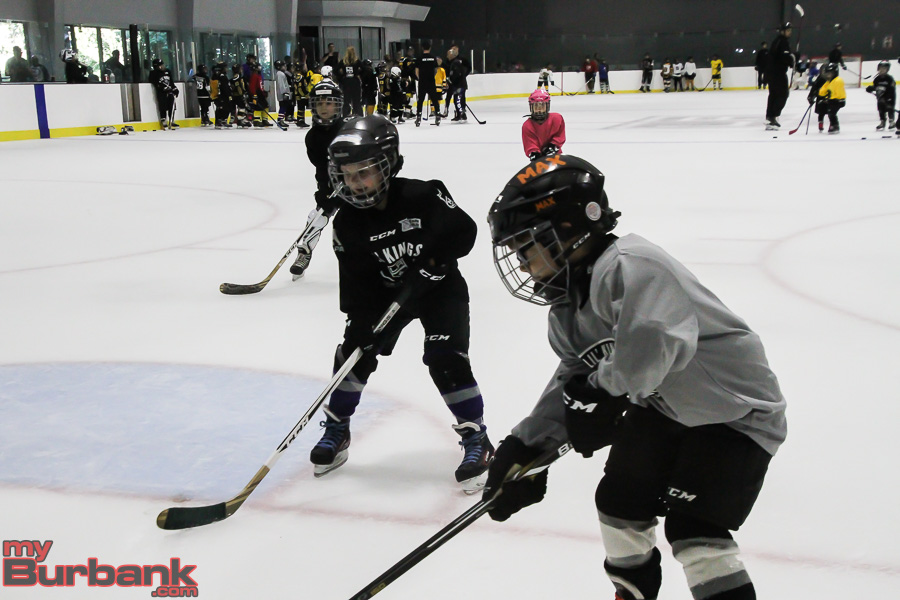 Even the little tikes wanted to have fun on the ice. (Photo by Ross A. Benson)

“With the direction that the game is going, with girls’ hockey, our L.A. Lions program taking off, I’m sure one day we’ll have a full girls’ program coming out of here, our high school program, our college teams, the American Hockey League is settled in California now, it’s going to continue to keep growing,” he said. “The NHL two years ago made a commitment to go to China. So the Asian community is getting very involved in hockey. And we need rinks. So I can see here at Pickwick in Burbank, that this is one of the nicest property facilities you can have. Opportunity for growth is incredible. I expect it to expand in the years to come.”

Pickwick Ice has been the home to the L.A. Figure Skating Club and the California Golden Bears youth hockey team.

ASEC was founded 13 years ago and is the largest owner and operator of ice skating and indoor sports facilities in the nation, with a total of 21 located in California, Arizona, Texas, North Carolina and New York.

ASEC also owns the Toyota Sports Center in El Segundo, which is the practice ice for the two-time Stanley Cup winning Kings.

Now it seems that the Kings, ASEC and the Stavert family will have a long and fruitful relationship.