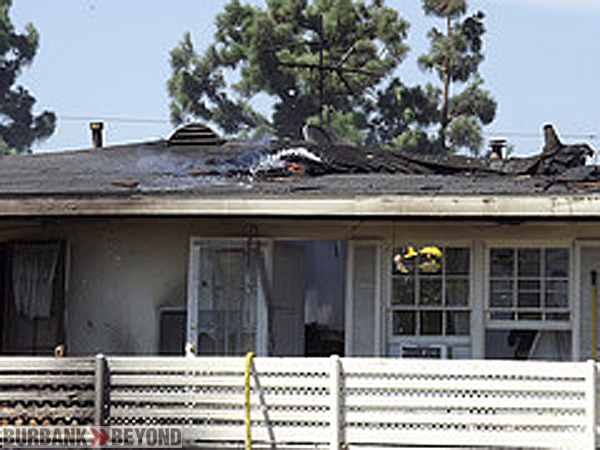 Calls came from all around Burbank as residents saw smoke in the west sky.  It turned out to be a fire on the Los Angeles border as a two-story apartment complex caught fire on the corner of Clybourn and Edison.

It took 119 Los Angeles City Firefighters 43 minutes to put out the fire that started somewhere on the outside before moving to the first floor and finally into the attic and came through the roof.  Firefighters reported a partial roof collapse.

The LAFD reported that 13 family have been displaced by the fire and will be assisted by the Red Cross.  There were no injuries reported to residents or firefighters.

Firefighters from both Burbank and L. A. responded to the corner of Clybourn and Riverside Saturday afternoon for a vehicle that had turned upside down.  It was reported that the young female driver of the vehicle was driving westbound on Riverside when she veered over and hit a parked car with the impact then sending her car upside down.

Los Angeles City Firefighters made an extremely quick knock down on this arson caused fire at the Studio Place Inn Motel at 10740 Ventura Blvd early Thursday morning. Arson Investigators were called to the scene after a suspect was taken to St. Joseph Medical Center for questioning, The fire left several residents outside in their pajamas and bathrobes as the fire destroyed the top floor of the two story motel. The fire’s cause was unknown but being investigated, the dollars loss of damage was still being tabulated.  The Humane Society was called for a deceased  dog.

The Professional Helicopter Pilots Association [PHPA] gathered this weekend for a training day and group discussion at nearby Bob Hope Airport’s Atlantic Aviation. Local Channel 2 and TV Channel 9’s on air personality and pilot Desiree Horton  was on hand to share some of her flying experiences with those gathered. The keynote speakers of Desiree Horton, Tom Short Chief Pilot of LA County Fire Department along with Pat Carey gave updated information and details to the changing airspace that the local helicopters fly.

Burbank residents on the hill last night saw the glow of a major fire light up the sky Tuesday morning. Los Angeles City Firefighters were called to a small market fire in the 6500 block of Lankershim Blvd in the early hours morning to find fire showing in what appeared to be an Armenian Market Place. Additional firefighters were called in when the fire appeared in the attic, but once the firefighters on the ground made entry into the small market they made quick extinguishment. The cause is being handled by LAFD Arson Investigators. There were no injuries to any of the firefighters involved and the damage amount was still being tabulated.