“I have always put an emphasis on supporting programs and events that help build a create a better community we as a store participate in,” commented Fleet Feet Sports owner Colin Klein. “The Greenway 2020 10K does just that, bringing together our running and walking community while raising money to better the outdoor spaces we all use and love every day.”

“In particular, the L.A. River is a treasure that I believe can and does offer a huge amount of enjoyment not only to our runners but our community as a whole,” Klein continued. “Having the opportunity to sponsor and support a race that believes these spaces should be made available and better to all in this community is one I am proud to be part of.” 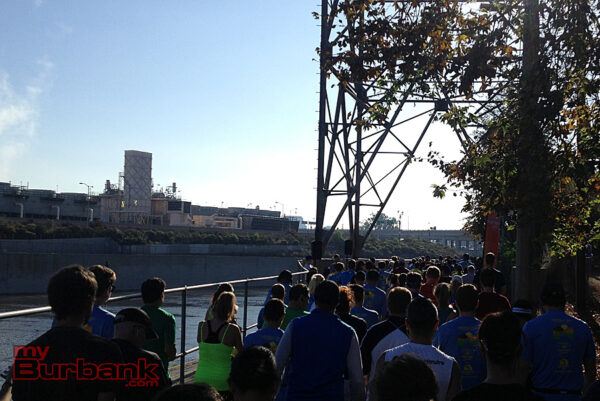 Participants started the race at the Greenway Bike Path entering from Ferraro Soccer Field in Griffith Park. From there, runners and walkers headed along the L.A. River towards Atwater Village, crossing the river on the Los Feliz bridge.

On the northeast side of the river, participants went towards Glendale, making a u-turn at the Colorado Boulevard overpass and then jogged through Atwater Park and along closed city streets. The final leg of the race followed San Fernando Road to the finish line, just south of Golden Road Brewing.

The L.A. River Run Greenway 2020 in its second year was “barely viable from a financial standpoint,” explained race coordinator Rob Rice, as he noted the race organizers needed to recoup investment costs from the 2013 race, the inaugural year.

“What we’re focusing on is providing an A+ experience for our supporters and raising awareness,” said Rice. “We do a lot more than the 10K. We also have monthly night runs and are also planning more events for 2015.”

“Our goal is to eventually donate money to specific projects along the river, be it a bench, a bridge, butterfly farm or bird sanctuary,” added Rice. “I don’t know, but hope that the 10K will raise enough money to do more than that.” 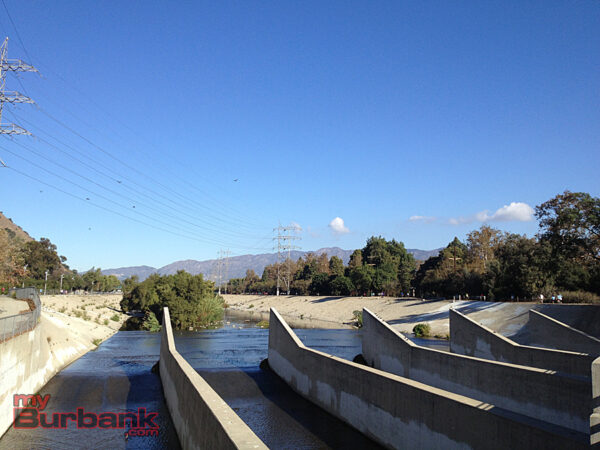 View of the L.A. River from the Los Feliz bridge in Atwater Village during the Greenway 2020 10K. (Photo By Lisa Paredes)

“The Greenway 2020 10K was a great success for bringing people to the river and builds momentum around making the 51-mile Los Angeles River a great public resource for the region,” commented Omar Brownson, CEO of the LARRC. “The L.A. River is the only place you can walk, bike, run, kayak or ride a horse in LA. We hope that by 2020, we can create one continuous experience from Canoga Park to Long Beach.”

“We were working with Omar on helping him promote his vision of what the L.A. River could be,” said Tony Yanow, owner of Burbank’s Tony’s Darts Away and co-owner of Golden Road Brewing. “The result of that work was 2020 IPA.”

“We were also working with Rob in helping him to create and launch a 10K that would end at Golden Road,” Yanow also said. “The race was right along the river, so connecting Omar and Rob was an obvious fit. Golden Road is honored just to be a part this mission and this race in our small way.”

“Omar handed me a study not too long ago on the immediate effects of having nature nearby in urban areas, specifically citing water bodies in densely populated areas, and said that mental health is overwhelmingly improved by having nearby ‘nature retreats’ for residents,” commented Rice.

“The stress of living in dense urban areas is systemic to a host of mental and physical health issues,” he went on to say. “Just living in L.A. causes increased stress and going to the river once a day might cure that? That’s huge. That’s why the river is so important.” 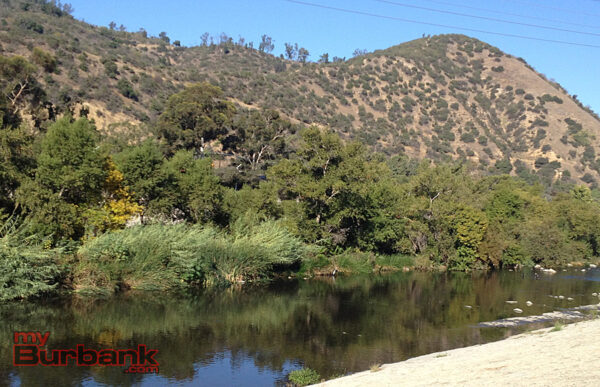 The L.A. River and Griffith Park in the background provided a scenic race environment for the L.A. River Run Greenway 2020 10K. (Photo By Lisa Paredes)

“I call it ‘instant nature’ because after working on Skid Row in DTLA all day, which I do, I can step out onto the Greenway, hear the song of birds, the rush of water and look at the intense greenery and instantly connect to what I personally long for every minute – nature,” Rice explained.

While Rice admits some residents may not feel the L.A. River has something they can enjoy right now because it’s mostly used by bikers and runners and few hikers currently. However, he encourages people to vist the LARRC website to see all the events being held on the weekends on a regular basis that aren’t just for runners and cyclists.

“As we concluded the second year on November 2, I personally feel it’s a big lead into next year where we plan to add a half-marathon,” Rice concluded. “Our goal from the beginning has been to grow the distance of the run to a full marathon by 2020.”

“But, there’s a couple of us who think we can go even farther than that,” Rice said, alluding to eventual plans for a 51-mile event from Canoga Park to Long Beach along the L.A. River in the future. 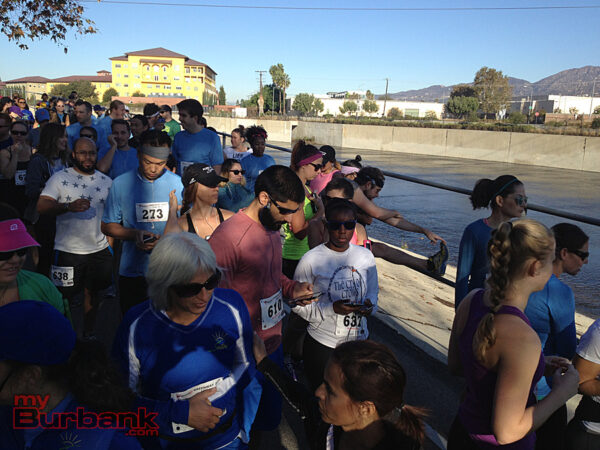 Golden Road Brewing recently released the new 2020 IPA benefiting the L.A. River Revitalization Corp’s (LARRC) Greenway 2020 Project. While the local brewery will donate $1 to the LARRC for every pint and four-pack sold, the rising company also wants to raise awareness of the efforts to turn all 51 miles of the Los Angeles River into a public green space by the year 2020.

“I cross the river four times a day. I live near and work along the river and always think about its incredible potential,” said Tony Yanow, co-founder of Golden Road. “It was amazing to hear Omar’s [Brownson, executive director of the LARRC] vision of what the river can be. It reminded me of the High Line project in New York City – a now beloved public park that took an eyesore on the verge of demolition and turned it into a beautiful, positive thoroughfare through the heart of the city. We want to do the same for L.A. through Greenway 2020.” 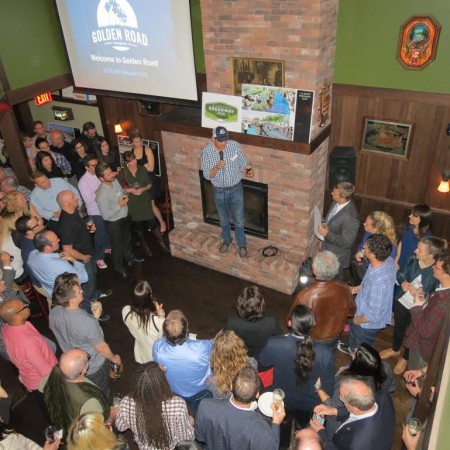 The L.A. River Corp is a non-profit organization working to transform the L.A. River through purposeful real estate and economic development. The group, along with its public and private partners, looks to create sustainable land use projects and add programs for the community along the river.

“Building a cleaner, greener and more connected Los Angeles along the L.A. River takes enthusiasm and commitment. Meg, Tony and the entire team at Golden Road continue to demonstrate that you can have fun while making a difference,” said Brownson. “We are thrilled to partner with Golden Road Brewing to build the awareness of our Greenway 2020 campaign to improve the quality of life in Los Angeles by connecting the 51-mile L.A. River.” 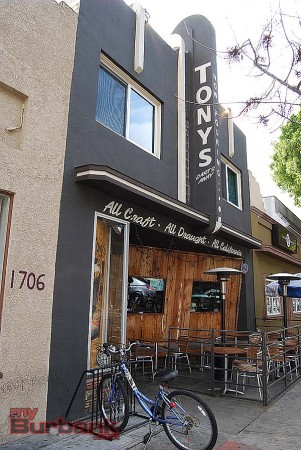 Tony’s Darts Away is a very popular spot in Burbank. (Photo By Lisa Paredes)

The 2020 IPA is the fourth in the brewery’s Custom IPA series, including Heal The Bay IPA, Better Weather IPA and Burning Bush IPA. Four hundred barrels of the 2020 IPA were brewed and the company stands ready to make more in the future.

Brewmaster Jesse Houck described the 2020 IPA as a “medium malt-bodied red IPA with huge pine and citrus aroma and a touch of tropical.”

The “outdoorsy beer” also has elements of cedar, Houck added. The 60,000 cans in the first release are emblazoned with an image of “what the L.A. River will look like in 2020.”

“The L.A. River is a flood control district, but it can be something beautiful,” Brownson added. “We want to make this something for people to enjoy for generations to come.”

“I’m excited about this project and that Golden Road is part of it,” Yanow also commented. “This project is important to me personally and is great for the city.”

Golden Road Brewing was founded in 2011 by Yanow and Gill with the plan to bring locally-brewed beers to the people of Los Angeles and is the first to can craft beer in the area. The Pub at Golden Road, situated next to the L.A. River off of San Fernando Road, and Tony’s Darts Away, located on Magnolia Blvd. in Burbank, are two popular local hangouts serving food and the company’s craft beer on draft. 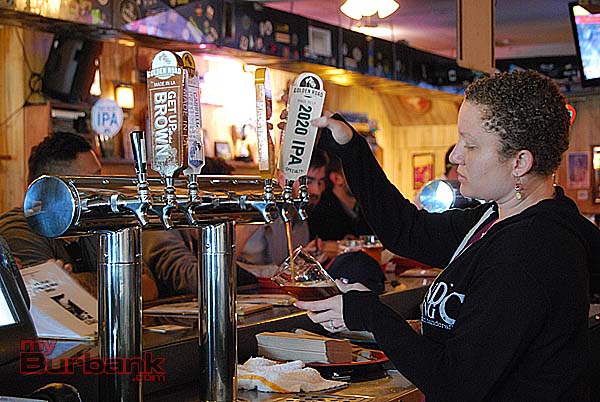