The Class of 2018 has turned its tassels at Burbank and Burroughs highs.

Once again both schools graduated a number of fine student athletes, some of which will continue their athletic careers at the collegiate level.

The following is a sampling of what to expect in the immediate future for the now graduated Bulldogs and Indians. 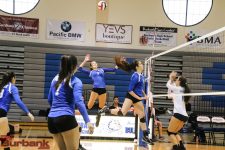 Melissa Daniel goes for the kill. She will attend Stanford. (Photo by Ross A. Benson)

Class valedictorian Jonathan Ragheb will attend Harvard University and may attempt to walk on the men’s volleyball team.

Lauren Ryan will attend Hawaii Pacific University, where she will compete in cheer. Nikki Howell will also compete in cheer, but stay a little closer to home by attending Cal Lutheran in Thousand Oaks. Anna Leonetti will be attending Riverside City College, where she plans to continue in cheer and stunt.

Softball player Bene Snyder will continue her career at Trinity University in Texas.

Burbank will be represented once again by the presence of a number of football players going to the community college route.

Moorpark College is getting Drew Pendleton, Kaydon Spens and Andrew Rovira. Anthony Lira will attend Los Angeles Valley College. Christian Fajardo is going to Pasadena City College and Darnell Williams will continue his career at College of the Canyons.

Jessie Czarneki will continue her track and cross country career at the University of Antelope Valley.

Noemi Apreza and Phoebe Forsyth will both continue their distance running careers at Glendale Community College.

Rory Rickey will hope to continue his volleyball career as a walk on at UC San Diego.

The 6-foot-5 outside hitter will continue her career at the University of Washington. 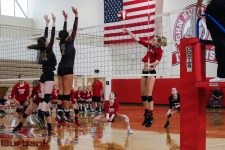 Marin Grote will wear purple in college as a member of the Washington Huskies.

Emily Virtue, who was a cross country national finalist as a sophomore, will continue her career on the opposite coast at Columbia University.

Pole vaulter Elizabeth Switzer is undecided, as she also has the option of going back to gymnastics, which has her first sport.

From the football team, Jacob Real will continue at Glendale Community College.

Basketball player Amir Montgomery is undecided but may be leaning toward Glendale Community College, per coach Allan Ellis.

Volleyball player Diego Rosal will walk on the men’s volleyball team at Pepperdine, where he will join former Indian Max Chamberlain and coach David Hunt, who grew up in the Glendale-Burbank area.

Fellow volleyball player and Pacific League MVP Cole Kaitz will attend Cal State Northridge, but has not decided if he will attempt to walk on or not.