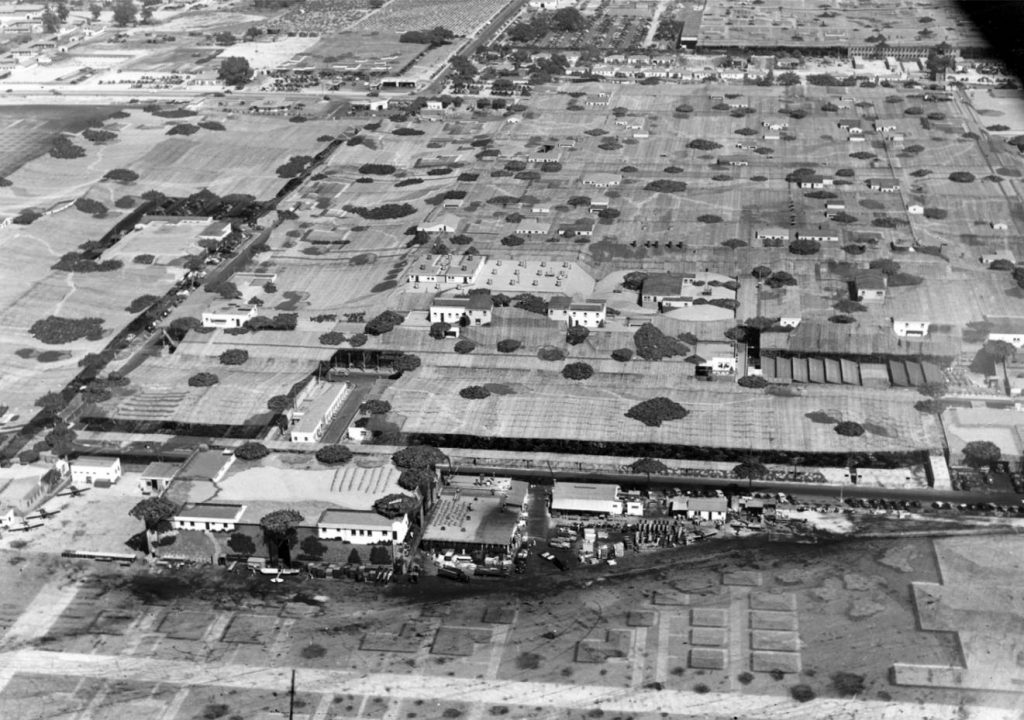 One of the most interesting Burbank stories of WWII is the complete covering of the Lockheed Aircraft Factory.

Imagine the entire Empire shopping center covered in chicken wire with painted feathers to look like alfalfa fields. But The Empire center was only a part of the total factory that was covered. 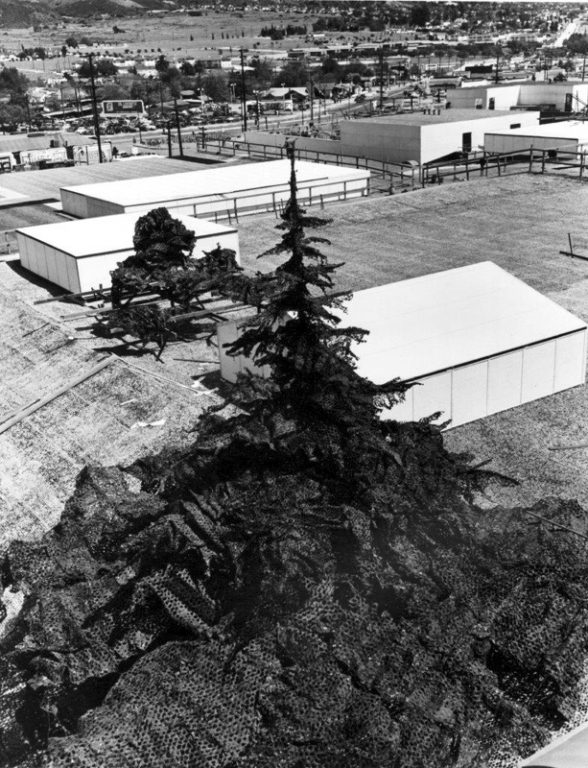 To add to the illusion were Cardboard houses, roads and laundry lines that Lockheed employees had to climb up and change the clothes each day to keep up the illusion!

Huge poles were embedded in the ground to support the mesh and the covering had to be maintained on a regular basis especially if it got wet. On occasion when big rain storms came to town the feathers would come loose and fall to the areas below the mesh.

Many a Lockheed employee came to their car after their shift only to find it covered In wet painted chicken feathers.

It is a great tribute to the creative individuals who designed and created such a convincing camouflage that from the altitude of an airplane you could not tell that there was a factory below. 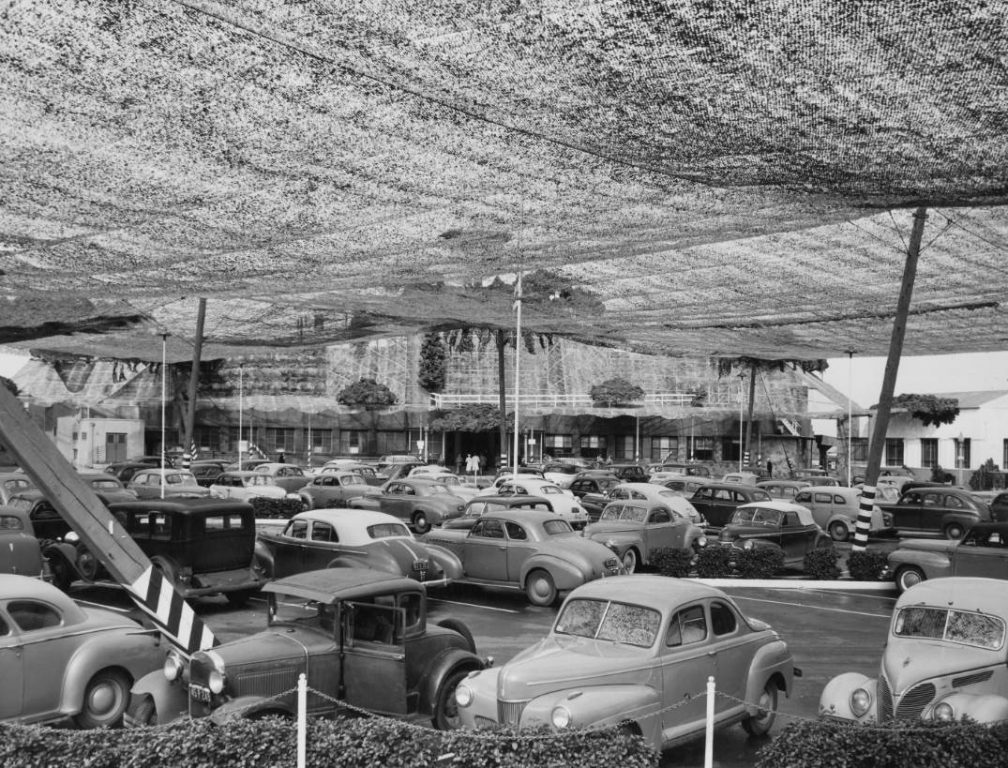 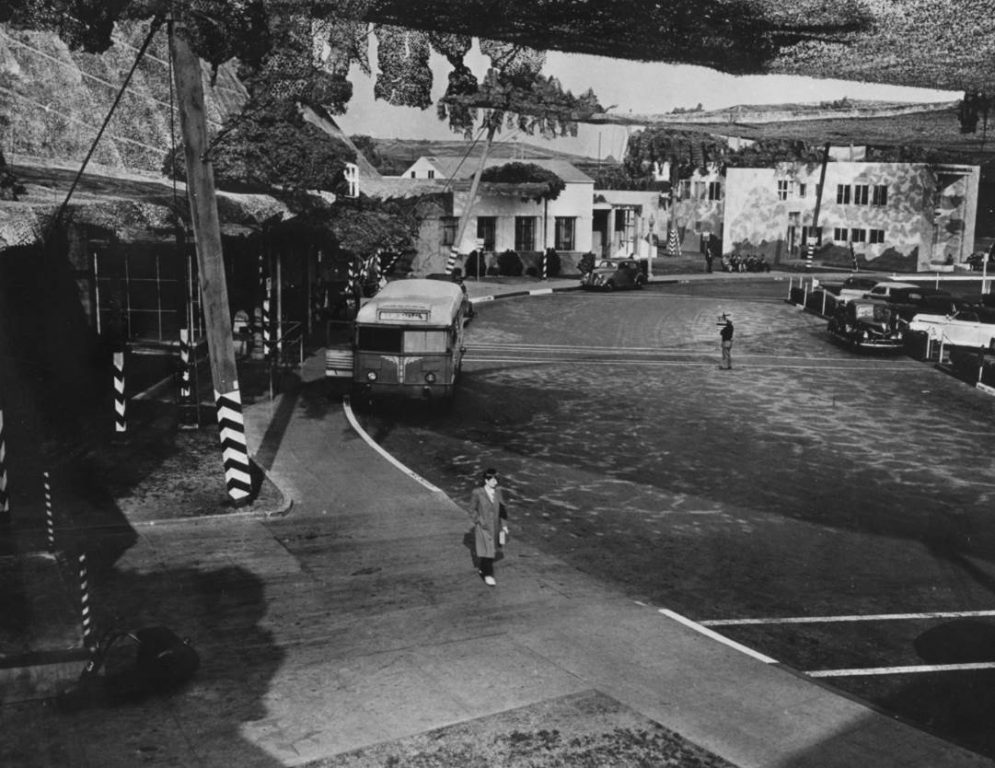 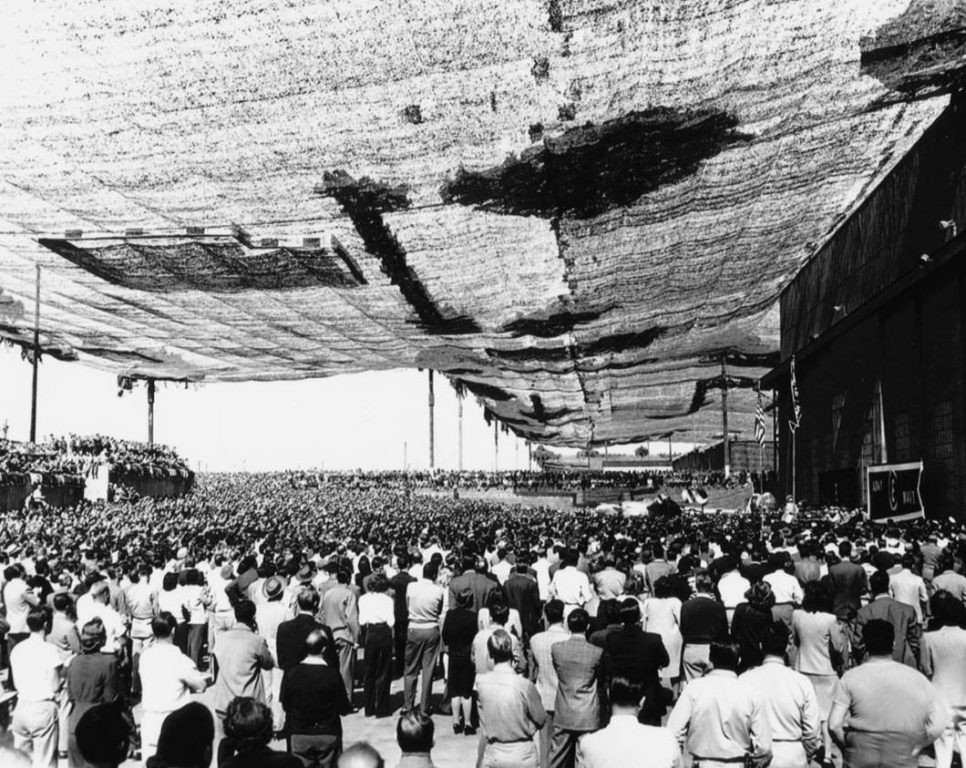 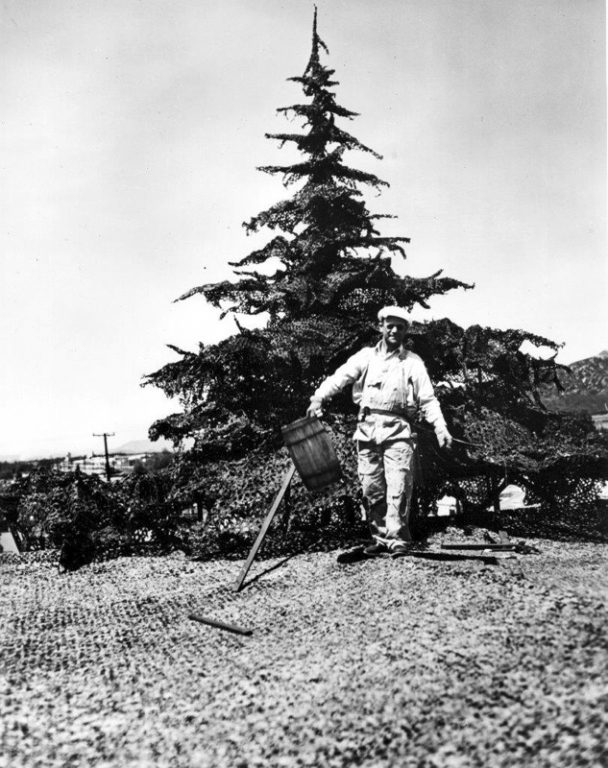 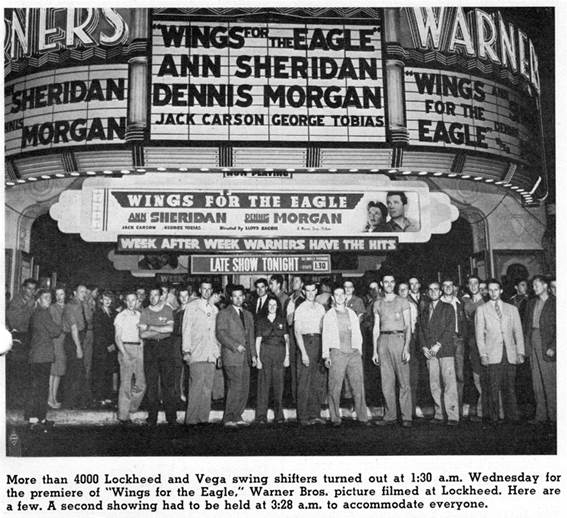 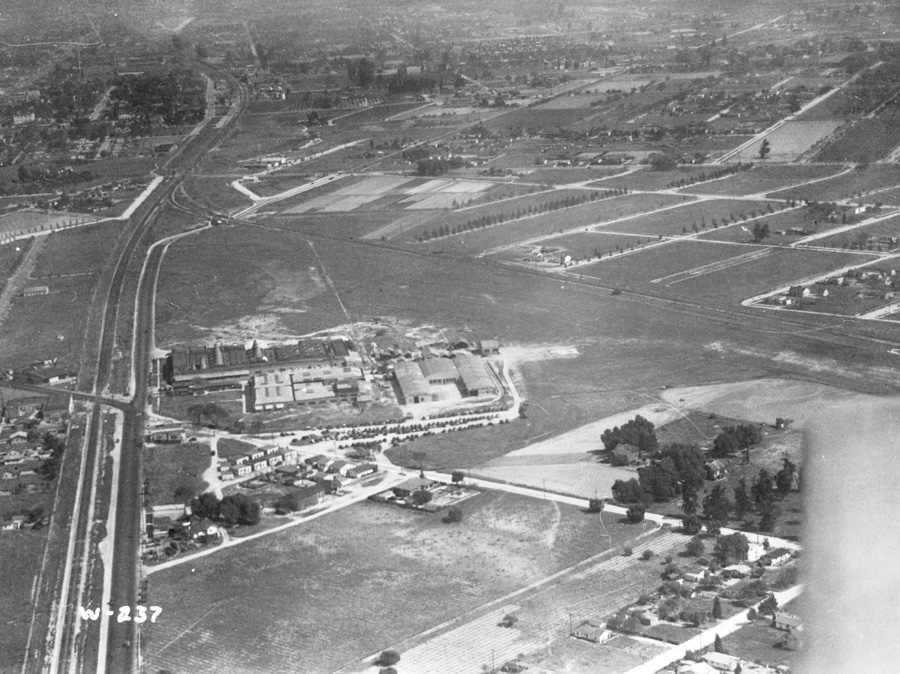 Many of us are shopping this Holiday season at the Empire Center and Costco to find the right gifts for all those on our lists.

One must deal with all of the traffic and parking issues to just begin shopping. We thought you might enjoy this aerial view of the area when traffic was less stressful.

Of special note the plowed field area at the upper part of the picture is Costco now, and just to the right is that narrow train bridge that all must pass under to get to the stores.

At the middle left in the photo where Empire St and Victory Place meet, that is the small company called Lockheed where now you can eat at Wendy’s, Panda Express, Olive Garden or Outback.

So next time you are frazzled by the Empire Center traffic think back to this picture of a more tranquil time and have a Merry Christmas.

Since their soft open on August 6, The Hangar Grille has drawn a steady stream of Burbankers ready to try the new restaurant and bar. Located in the Magnolia Park district, the spot combines tasty eats with comfortable ambiance.

According to the sign outside the restaurant, The Hangar Grille is dedicated “to the city of Burbank and the employees of Lockheed that dedicated their skill and pride in building the best flying machines during Lockheed’s Burbank history.” 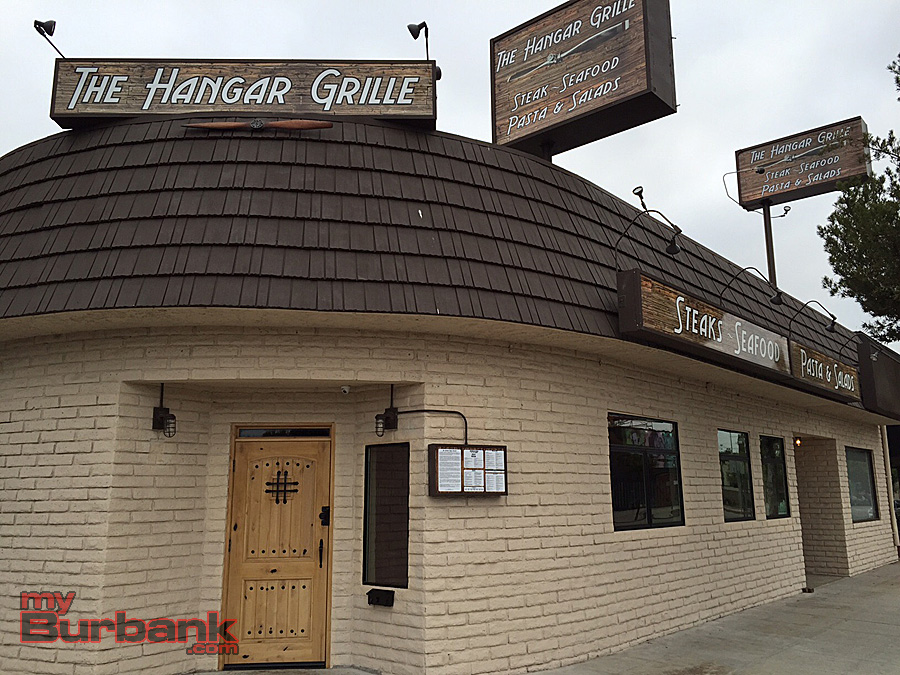 The aeronautic theme makes for a nice vibe inside, with fans, photos and decorative accents, including an open ceiling with exposed piping. Several television screens dot the upper walls. However, the television sound is low so the restaurant is not noisy, but rather an enjoyable place for a conversation.

We stopped by a few days after The Hangar Grille opened, and were charmed by the friendliness of the staff. While we ordered some appetizers and pastas for dinner, the lunch and dinner menus include a host of creative apps, soups, salads, sandwiches and burgers, steaks, BBQ and ribs. For now, the bar offers wine and beer only. 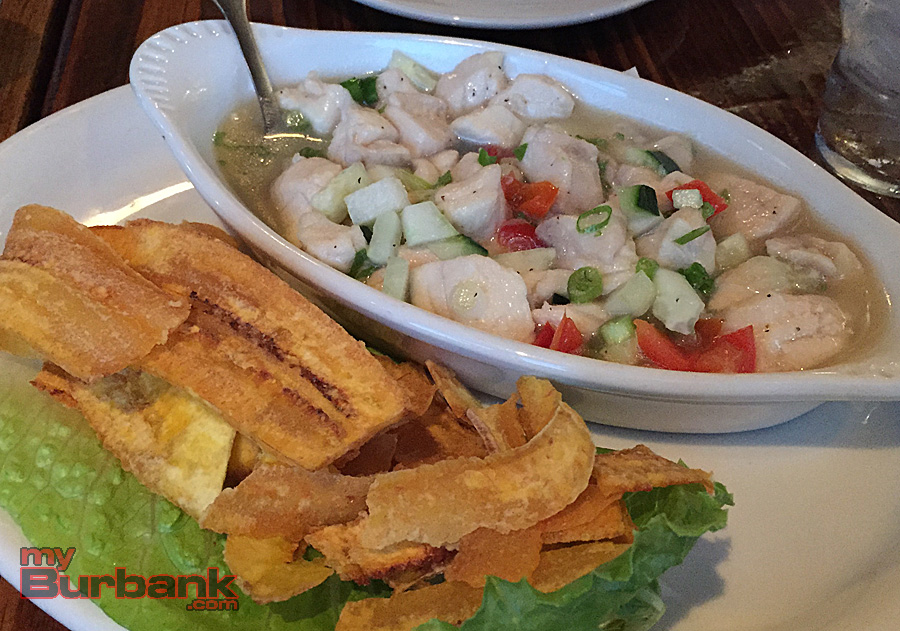 One of our favorites was the Snapper Ceviche, made from a high quality cut of fish. Accompanied by plantain chips instead of the usual tostada, the appetizer was tangy and fresh. The ceviche included pieces of jicama, red pepper, jalepeno and cucumber and was very refreshing.

We also enjoyed the Crab Stuffed Mushrooms. The plate included eight mushrooms filled with breaded crab mix and topped with parmesan cheese. Dipped in the restaurant’s special red pepper aioli sauce, the mushrooms were a hit with the whole family. 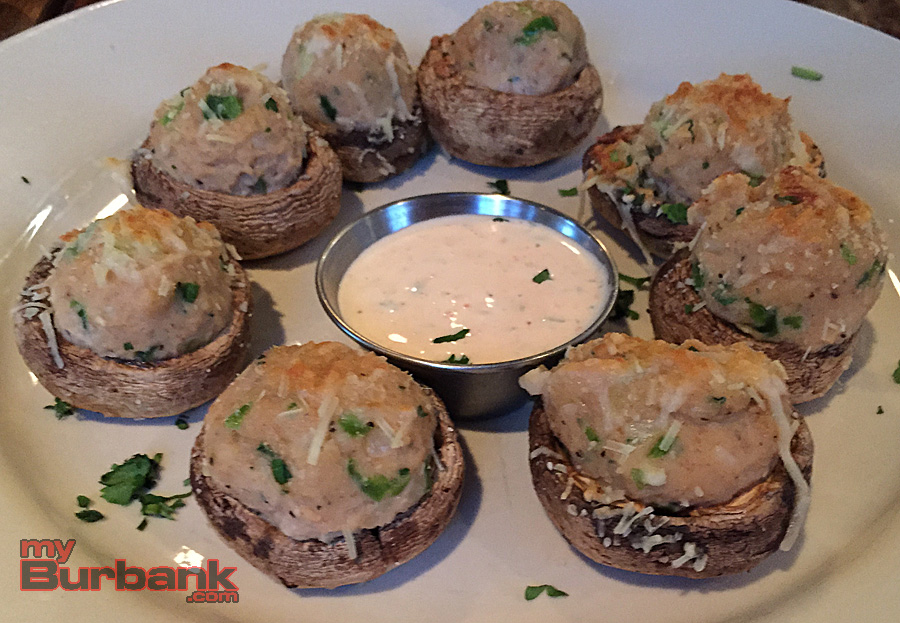 Of the four pasta dishes we ordered, our favorite was the Gemelli & Chicken. Chicken, sun dried tomatoes and mushrooms were sauteed in a light cream sauce with Gemelli pasta. The dish has some Cajun seasoning for a bit of a kick.

In fact, many of the plates we tried had a bit of a kick, incorporating a liberal use of spice and heat. Several of the pasta dishes used cream in the base sauce, making for a heartier, richer plate of pasta.

We enjoyed the Penne Vegetali, with roasted vegetables in a spicy marinara sauce and tossed with penne pasta and cheese. The dish reminded us of ratatouille. The Seafood Linguini was tasty too, very flavorful in a cream sauce. 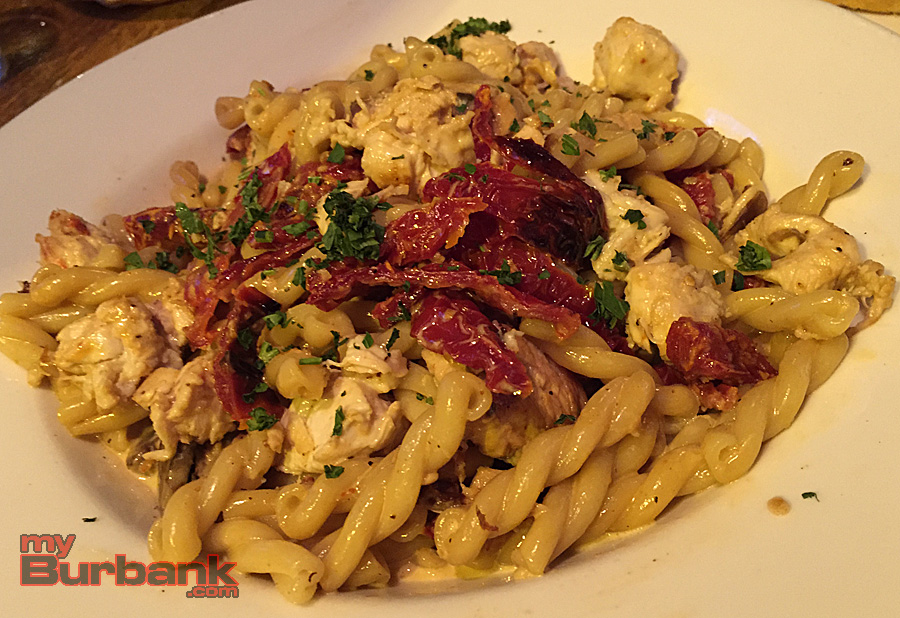 Gemelli & Chicken at The Hangar Grille. (Photo By Lisa Paredes)

The Penne With Lobster Claws was another favorite dish, combining spinach, tomatoes and penne sauteed with The Hangar Grille’s signature and spicy Santa Fe Cream sauce, and topped with lobster meat and chopped cilantro.

We enjoyed our meal at The Hangar Grille and look forward to returning to try some of the amazing-sounding salads, sandwiches and appetizers. Magnolia Park’s newest eatery, The Hangar Grille, is On The Marquee. With later hours, open until 11:00 p.m., Burbank finally has another option for those of us who eat dinner on the later side or want to go out for a casual drink in the neighborhood.


The Hangar Grille receives: On The Marquee

Seafood Linguini in a cream sauce at The Hangar Grille. (Photo By Lisa Paredes)

Gemelli & Chicken at The Hangar Grille. (Photo By Lisa Paredes)