Ever wondered what the International Baccalaureate® (IB) Diploma Programme is? Considering an alternate curriculum for high school?

Wonder no more and look no further. This informational session on Saturday, October 26 from 2:00pm-4:00pm will help you uncover all the secrets of the IB® Diploma Programme.

You will find out what it takes to become an IB learner and what it means to develop the 10 IB learner attributes. You will learn why the IB® Diploma Programme is a sought-after credential at top universities all around the globe. You will uncover how it prepares you to become a successful college student and a lifelong learner. You will discover the benefits of an international mindset and how the IB® Diploma Programme is complemented with a language-focused course of study.

Incoming high school freshmen are encouraged to attend with their parents. 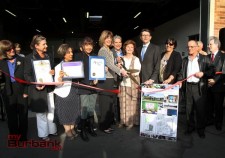 Mayor Emily Gabel-Luddy is joined by Councilman Robert Frutos and School Officials at Ribbon Cutting. (Photo by Ross A. Benson)

LILA promotes a multi-cultural experience through a rigorous bilingual curriculum and a creative learning environment. 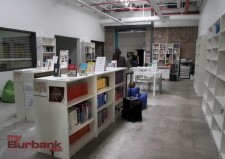 Library (Photo by Ross A. Benson)

According to the school’s website, LILA is only one out of five schools in the U.S. that offers both the International and French Baccalaureate programs. Students at LILA speak a variety of languages and represent 48 different nationalities.

Burbank Campus Director Anneli Harvey said LILA’s expansion comes at a time when there is a huge interest in Los Angeles in bilingual education.

LILA hopes the small and nurturing environment will create competent individuals who will take an active part in society, and that the bilingual aspect of the curriculum will help students become “open citizens of the world,” according to Harvey. Students are also required to give back to their community by participating in community service.

In addition to LILA’s promotion of active citizen engagement, the school’s academic coursework is rigorous. High school students follow both American and French coursework until the end of the 10th grade. At that time, students choose one of two baccalaureate programs: the French Baccalaureate or the International Baccalaureate. Both programs are academically challenging and prepare students for a university education. 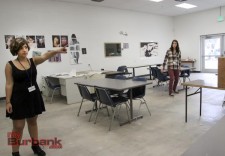 Students and tour guides show the art room. (Photo by Ross A. Benson)

According to the school’s website, students score highly on their examinations for the International Baccalaureate and the French Baccalaureate, earning them places at many prestigious universities in the U.S. and abroad.

LILA’s goal in expanding their campus and environment is meant to create “college ready students equipped to do a good job in the world,” according to Harvey. 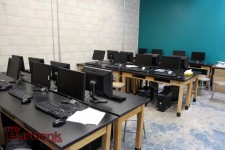 The Computer Lab. (Photo by Ross A. Benson)

In addition to traditional classrooms, LILA’s new Burbank campus includes a science lab, an art room, a computer lab and a music room.

The campus is very colorful, with brightly colored walls, desks, benches and trash bins. Classrooms are also equipped with walls made out of white boards for the teachers and students to use for lessons, all of which are meant to represent and encourage a creative learning environment.