Burbank Police and Fire Departments were kept busier than usual Saturday night when they were required at two different traffic accidents requiring rescue and extrication within minutes of one another. 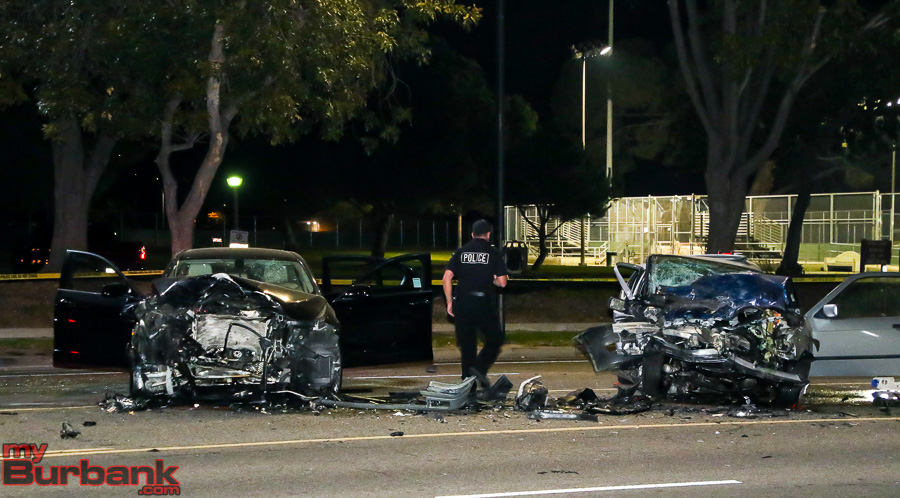 A Burbank Accident Investigator collects evidence and measurements at the scene of this two-car head-on crash Saturday night. ( Photo by Ross A Benson)

The first accident occurred on Victory Blvd at California Street at 7:19 pm. The Fire Department dispatched a Full Rescue Response as it was reported with people trapped, upon there arrival they had two cars that appeared to have struck each other in the middle of the street head-on.  Paramedics found it was necessary to request an additional Rescue Ambulance to treat and transport additional victims from one of the autos. One of the patients the driver of one of the cars was transported to a local Trauma Center because of the extent of the injuries involved.

The Burbank Police Traffic Investigators responded to investigate the accident and determined that one of the cars that was traveling eastbound Victory Blvd had veered into oncoming westbound traffic striking the other auto.  They also determined that the driver of the eastbound auto was driving under the influence and had alcohol in his car. He was going to be treated and booked for driving under the influence. 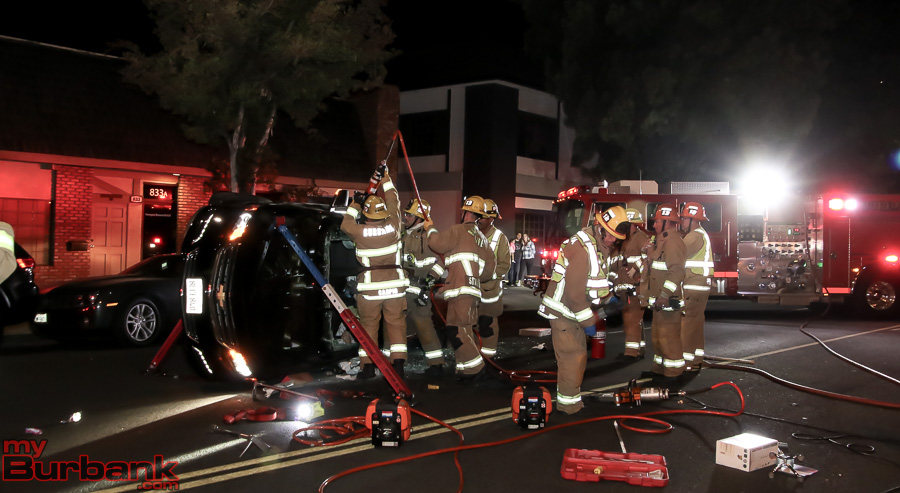 Firefighters use the ‘Jaws of Life’ to cut this driver out of his overturned van Saturday night. ( Photo by Ross A Benson)

The second accident occurred only 24 minutes later in the 800 Blk of Hollywood Way where a van struck a parked car and rolled over on its side. That accident required a full rescue response as the driver was trapped inside his vehicle.

With Burbank Paramedics busy on the previous accident Fire Department Mutual Aid kicked in and a Glendale  Engine company and Advanced Life Support Ambulance was required to transport the victim who appeared to only suffer minor injuries.

Both accidents required the major streets to be closed for an extended time for the investigations and clean up and cars.

Burbank has had several major accidents within a week. On Thursday a motorcyclist was killed while traveling at a high rate of speed while going northbound on Glenoaks Blvd, and last Saturday night Burbank Police investigated another accident that occurred on Glenoaks near Walnut Ave were driving under the influence and speed were the contributing factors.