In the athletic arena, nothing is ever given, but rather it’s earned, and for the third consecutive season, the Burroughs High girls’ volleyball team claimed the Pacific League championship.

The scores were 25-15, 25-20, 25-22 over visiting Arcadia on Tuesday afternoon, and now the Indians will prepare for a second and final meeting when hosting Burbank on Thursday night at 6 p.m.

This weekend, the CIF Southern Section will announce its pairings and seedings for the following week’s playoff matches and Burroughs should receive a first-round home match. 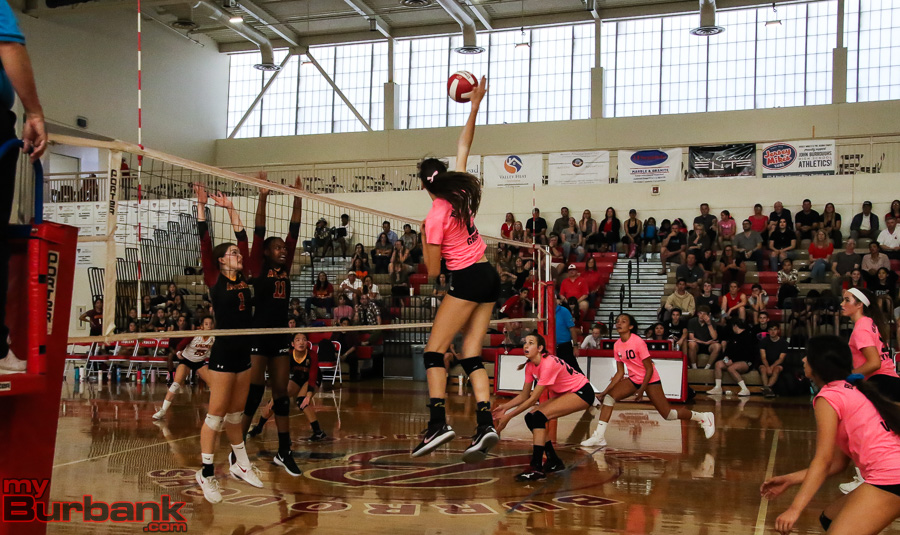 Lydia Grote finished with 12 kills in a victory over Arcadia. (Photo by Ross A. Benson)

What it boiled down for Burroughs these three years of league dominance is talent, hard work in practice and being able to mesh together as a team during the games.

“Our players, from beginning to the end on the bench, we have good players. We can inter-change them and move them around and it’s very helpful,” Burroughs coach Edwin Real said of his squad. “It really helps out in practice. In practice we can push each other and reach a higher level and then when it comes to game time, we can mix kids and it makes it real easy.”

Real, in his 16th season at the Indians leader, added: “Passing was better,” he pointed out. “Even at times when  we struggled, we still kept composed. We just trust each other that we’re going to get the job done.”

The Apaches (20-11 and 10-3 in league) can finish tied for second place with a victory at home against Crescenta Valley on Thursday. 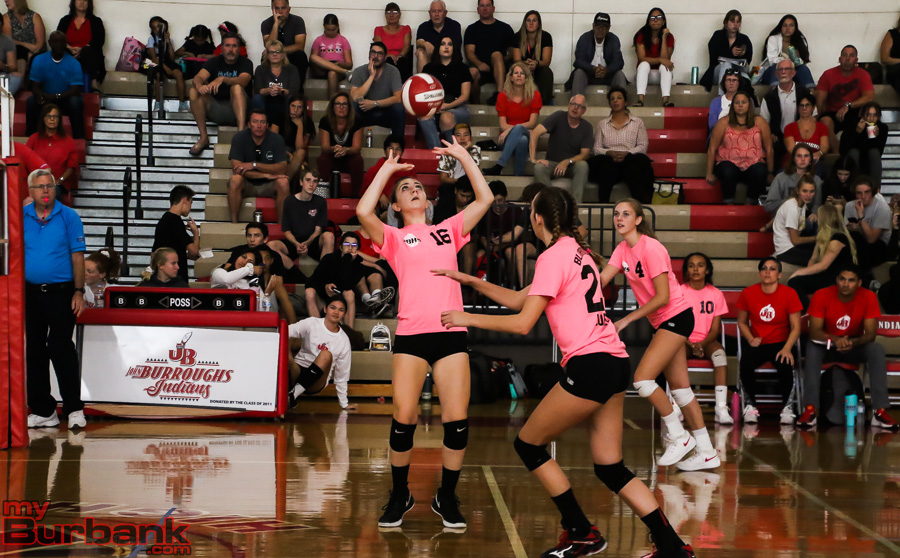 Senior setter Milana Abrahamian passing the ball during a sweep over the Apaches. (Photo by Ross A. Benson)

Burroughs’ top offensive stars were on the money as they combined for 34 kills.

The early portion of the initial set was extremely close and it included being deadlocked at 1-1, 2-2, 3-3, 5-5 and 6-6 before the Indians surged in front 7-6 on a hitting error by the Apaches, who brought up two players from the junior varsity.

Burroughs (16-5 and 13-0 in league) then pulled in front 10-8 on Grote’s kill and led 12-8 on sophomore middle blocker Bella Lomet’s spike as Arcadia asked for time.

The Indians’ advantage became 14-10 on Grote’s winner and 16-10 on a laser from senior opposite hitter Joelle Burras. 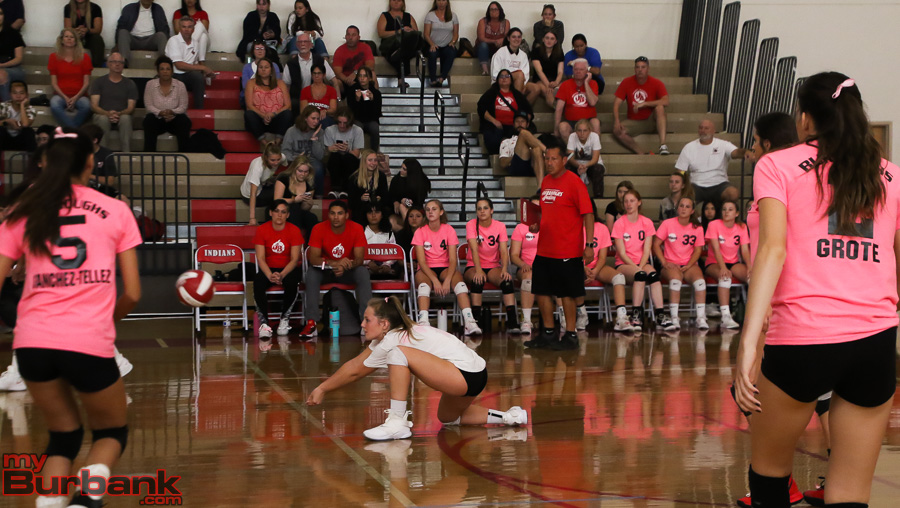 Charlotte Hobson digging one out in a match versus Arcadia, which clinched a third straight Pacific League title for the Indians. (Photo by Ross A. Benson)

Back-to-back service aces from Burroughs senior setter Milana Abrahamian made it 18-10 as the Apaches requested a break in the action.

“Serving tough is definitely something that a team needs and I feel like when you get a big lead, it’s good for the whole team and keeps the energy alive,” she said.

Abrahamian spoke about the upcoming postseason and hopefully advancing to the title match.

“It’s definitely a goal we have this season,” she said. “We’re trying to get past quarterfinals and we want to make it to the top. Our whole team wants that. If we’re all on our game, we can make it all the way. If we just play our game, we’re unstoppable.”

Virtue’s kill made it 20-11 and Sanchez-Tellez’s winner saw the Indians sprint ahead 22-13.

Two at the net ready for a stuff for Burroughs. (Photo by Ross A. Benson)

Virtue’s two consecutive kills made it 24-14 and when Arcadia junior Angela Zhou’s attempt hit the net, the Indians won the opening frame.

The second stanza began with the Apaches taking a 4-1 lead on a tapper from junior Alexandra Bierotte.

Arcadia’s advantage swelled to 9-5 on a kill senior Shayli Johnson. Burroughs chopped the advantage to 12-10 on Grote’s winner and evened it at 13-13 on an ace from junior defensive specialist Lily Rogers.

When Virtue added a kill, the Indians darted ahead 15-13 as the Apaches needed time to gather their thoughts. 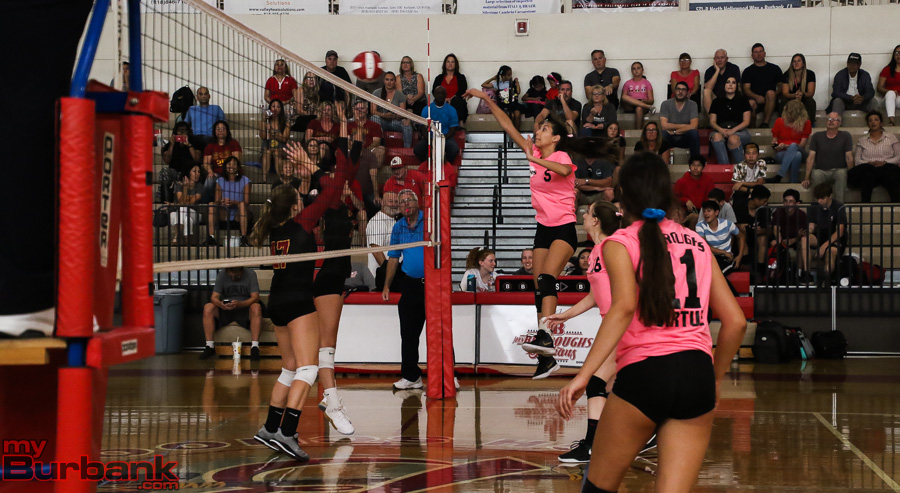 Camila Sanchez-Tellez contributed 10 kills for the Indians. (Photo by Ross A. Benson)

Virtue said she has high hopes for the playoffs.

“I really think what’s different about this year is we don’t really rely on just one player,” she said. “We spread out whoever is bringing in a lot of points. Our defense is very consistent on top of really very skilled hitters. The fact that we’re really well-rounded makes us probably one of the best teams in the program.”

Virtue went on: “No matter what happens we’re going out swinging. We’re going to fight to the end and I really think we can get a ring,” she said.

Consecutive aces by Rogers made it 17-13 and a push from Virtue shoved the Indians ahead 20-16.

A co-stuff by Virtue and junior outside hitter Mariah Bowman made it 21-17. A kill from junior middle blocker Emily Caneday saw the Apaches seek a time out as the lead ballooned to 23-19.

Virtue’s kill made it 24-19 and Virtue’s service ace had the Indians knocking on the door at 24-20. Grote’s kill was the set-clincher.

In the third and final set, Arcadia dominated the early action as the Apaches led 5-1 on a block from senior Monet Latunde and were ahead 9-4 on an ace from senior Cate Ruiz.

“I think the losses were really good for us just because we’re a young team. So a lot of the kids are going to come back next year,” Arcadia first-year coach Stephen Bernabe said. “So this is more about growth in the bigger picture. For a team like Burroughs, with a lot of seniors who can put the ball down, it’s good for me to see our youth be able to pass the ball back up, rally, and even though we lost in three, our scores kept on getting better, so I know that the kids are reading better.”

Burroughs came within 14-11 on a blast from Grote as Arcadia asked for another stoppage in time. The Indians outscored the Apaches 7-4 and evened it at 18-18 on Virtue’s kill.

Arcadia sophomore Ashley Marrone played well. “Last year we lost all of our seniors who were really tall, so we kind of turned out to be a little shorter,” she said. “Some things I like about this team are we strive to be better, we have high energy, we keep each other up and we have great sportsmanship.”

Marrone added: “Today I felt we did really great, but there were some things we could have fixed like our passing,” she noted. “We were kind of lazy about that. For future teams I do think we’re going to be improved.”

Sophomore setter Meghan Lynch tossed in a push for the Indians that tied it at 20-20 and Virtue’s kill evened it at 21-21.

When Johnson’s swing hit the net, Burroughs led 22-21 as Arcadia requested a time out.

Virtue’s mishit leveled it at 22-22, but Grote scored the next three points with a kill, a block and a kill for the set and match.

Before the second set began, Burroughs High outside hitter Lydia Grote went over and gave a high five and said words of encouragement to the other five teammates on the court.

Though the Indians were down a game, this wasn’t something that Grote was overly concerned with, but still wanted to inspire her team and exhibit leadership. 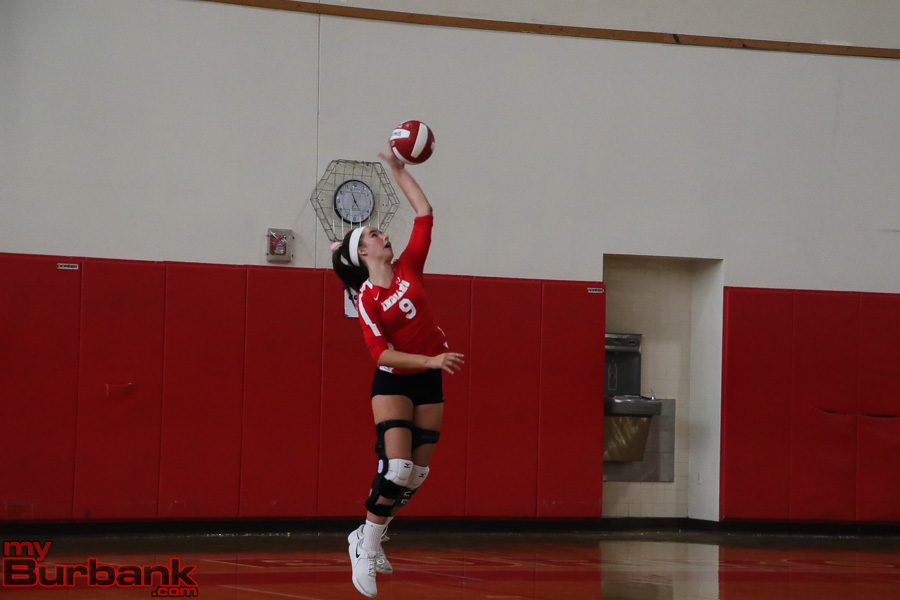 Meagan Lynch is about to serve in a four-set win over visiting Crescenta Valley. (Photo by Ross A. Benson)

Looking back, this small gesture by Grote may have ignited the comeback by Burroughs over visiting Crescenta Valley in a Pacific League showdown as it went on a took the next three sets and captured a 20-25, 25-20, 25-8, 25-10 decision in a girls’ volleyball match on Tuesday.

With a victory over Muir at home on Thursday, Burroughs will have secured at least a share of yet another league banner.

The second set commenced with a co-stuff from Burroughs sophomore middle blocker Bella Lomet and Grote that made it 5-1.

“On the first set it was anyone’s game. It wasn’t our game, but it also wasn’t their game,” said Grote, a senior who will attend and play women’s volleyball for UC Berkeley and who had a match-best 14 kills with two blocks. 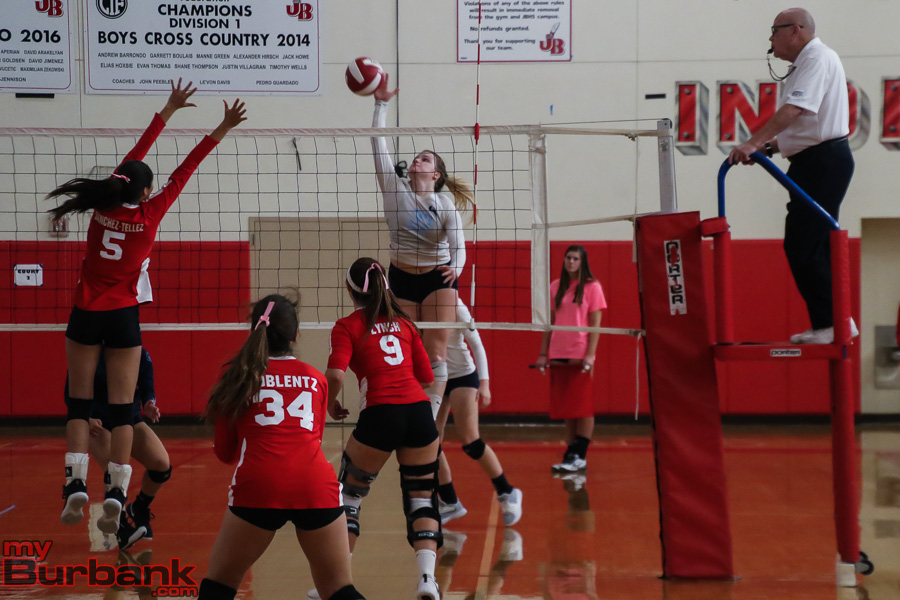 Camila Sanchez-Tellez (No. 5) is about to try and block an attempt against the Falcons. (Photo by Ross A. Benson)

Junior outside hitter Catie Virtue’s spike made it 8-3 and when Virtue (11 kills) added another winner, Burroughs’ lead ballooned to 13-8.

A laser from senior middle blocker Camila Sanchez-Tellez (11 kills) made it 15-10.

“We were very inconsistent. It’s frustrating,” Burroughs coach Edwin Real said of the initial set, which could have gone either way. “Communication was not very good for us. Actually it was very poor. When you play well, you communicate better.”

A jam from Sanchez-Tellez handed the Indians a 23-19 advantage and a service ace from Virtue saw Burroughs extend its lead to 24-19. Sanchez-Tellez’s missile was the set-winner and evened it at one game each.

Sanchez-Tellez’s kill in the third set delivered Burroughs a 2-0 lead and Grote’s string of three kills pushed the margin to 7-5. 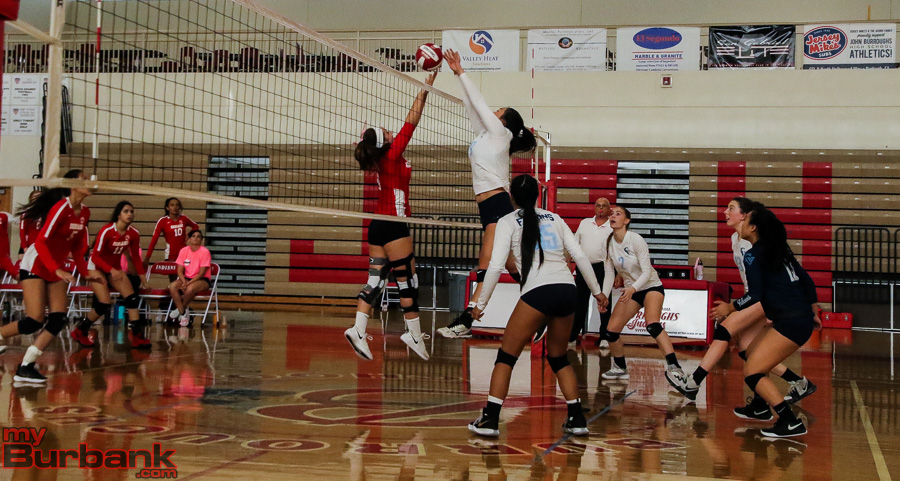 It’s a meeting at the summit when Burroughs faces Crescenta Valley. (Photo by Ross A. Benson)

A co-stuff from junior defensive specialist Lily Rogers (five aces) and Lomet made it 10-6 as Crescenta Valley, which is tied with Arcadia for second place in league, asked for time.

A service winner from Rogers saw the Indians race to a 12-6 lead and a tapper from sophomore setter Meagan Lynch pushed it to 14-7 as the Falcons (32-10 and 9-2 in league) once again requested time out.

Sanchez-Tellez’s kill then increased the lead for Burroughs to 18-7 and Virtue’s spike made it 21-7.

Virtue’s sledge hammer made it 24-8 and junior outside hitter Mariah Bowman’s spike sealed the game.

In the fourth set, the Indians bolted out to a 4-2 lead on Grote’s kill. Lomet’s sizzler made it 6-3 and Sanchez-Tellez’s tapper increased the edge to 11-6 as the Falcons needed yet another respite. 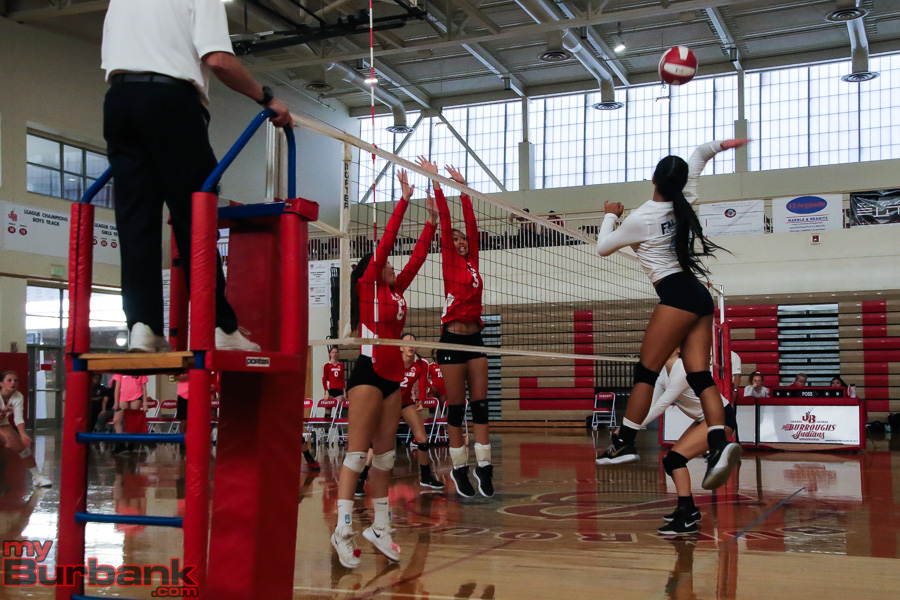 The Indians rallied to claim the last three sets and won the match. (Photo by Ross A. Benson)

Sanchez-Tellez’s tapper and kill shoved the Indians in front 13-9 and Virtue’s smash made it 18-10.

The Indians (14-4 and 11-0 in league) then scored the next seven points that included an ace from Virtue that made it 21-10 and Virtue’s service winner that clinched the set and match.

The initial set was even at 1-1, 2-2 and 3-3 before the Falcons emerged with an 8-3 lead on a kill from senior outside hitter Lizzy Kerman.

But the Indians responded and evened it up at 10-10 on an ace from sophomore defensive specialist Charlotte Hobson (five aces).

Crescenta Valley surged in front 15-11 on an ace from sophomore setter Sydney Postelwaite, however, a kill from Virtue sliced the lead to 16-12.

When Virtue’s ball sailed out of bounds, the Falcons led 2-14 as the Indians asked for a halt in the action.

“We really struggled to pass all night and when you can’t pass, it’s tough to do anything else,” Crescenta Valley coach Matt Simons said. “The girls, they’re amped up for this game. They know Burroughs is the league champs and in first place.”

Simons continued: “When things didn’t go our way, it was really tough to dig ourselves out of that hole,” he explained. “We weren’t in the best mental state all night. When Burroughs struggled in game one, they had the same positive minds all the way through. When we struggled, which we’re bound to do in a close match, we almost tried to press harder and harder. Mentally we dug ourselves more of a hole.”

A spike from junior outside hitter Jamie Santos (seven kills) made it 22-16 in favor of the Falcons.

A tapper from Kerman (team-best 12 kills with seven digs and two aces) had Crescenta Valley ahead 24-17 and a joint-block from senior setter/opposite hitter Isabella Doom and senior middle blocker Ellie Song (five kills) sewed up the set.