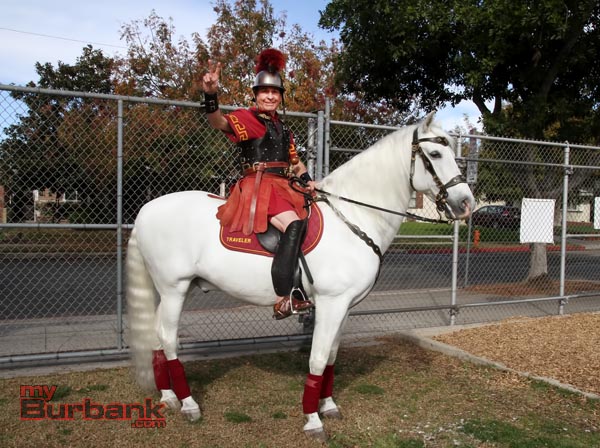 This year they hosted a special guest – the USC Trojan mascot, Traveler!

Each year before the college rivalry, kids choose either UCLA or USC to root for, and they can wear UCLA or USC t-shirts or buttons, or just don the colors of the college of their choice. During recess, students were handed stickers from both schools and had relay races with USC and UCLA footballs. 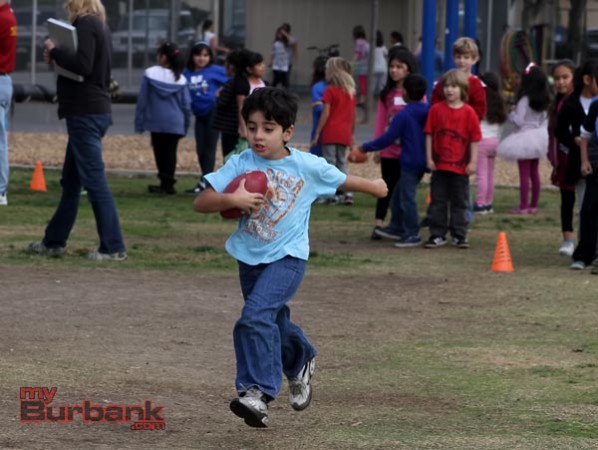 The event is part of College Month at McKinley. If children start thinking about going to college in elementary school, they see it as a reality, as something they can actually do. To help them with this vision, we have events throughout the month of November that focus on colleges and going to college.

At the beginning of the month, they had “College Day,” where kids wore t-shirts with the name of any college they like, and they made pennants at recess with the names of colleges they would like to go to. Also, a “College Hall,” at the entrance of the school, where pennants hang from colleges from all over the country.  Fifth graders will take a field trip to UCLA, and college becomes a reality to them when they see the wonderful opportunity available to them in their hometown. 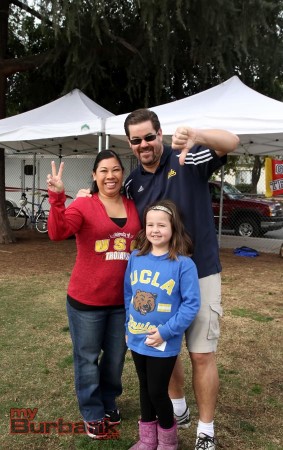 There is also a “scholarship jar” in the library and the kids bring money to school on their library days and contribute to it. At the end of the year, we will award a scholarship to a senior who attended McKinley, is graduating from John Burroughs High School, and is going on to college. The McKinley kids get to see how important it is to start saving for college now, and the recipient comes back to McKinley and talks about going to college and how McKinley helped him or her prepare for it. 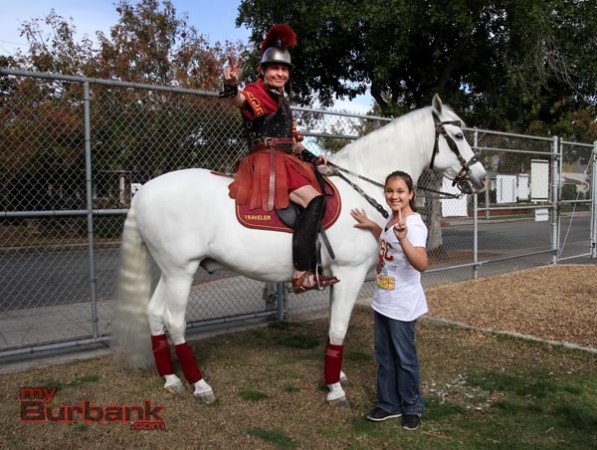 McKinley Elementary School musical performance is meant to be a fun assignment after state testing, but third- and fourth-grade students also learn about taking responsibility, accepting people from all walks of life and forgiving people who make mistakes. Teachers say students remember things from the plays that come up in the classroom. 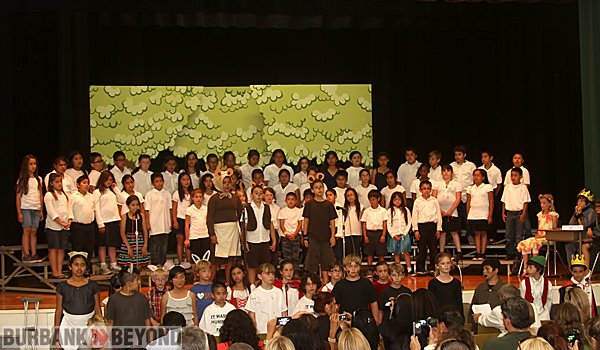 About 90 students, representing two fourth-grade classes and one third-grade class, took part in the production, said Cherie Wescott, who produced the musical along with Mr. Danielson, Mrs. D’Mello and Mrs. Fuentez.

“Every year we get together and do one of these at the end of the year,” she said. “We just find it is a nice way to wind things up for the kids and after all the hard work of state testing it gives them a little relaxation. It is something fun for them to do every year.”

The topic was combining favorite fairy tales with lessons on building good character. 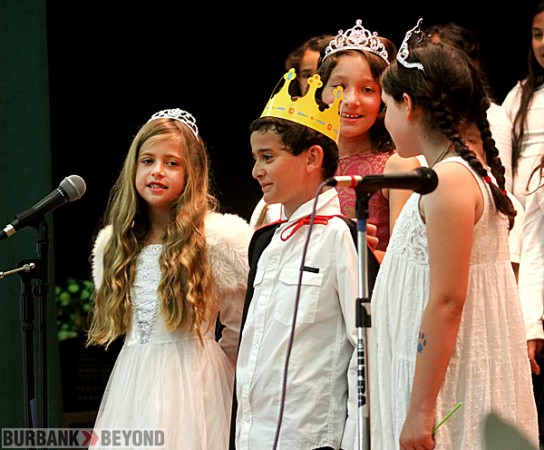 The Princess and Frog played by: Victoria Valenzuela,Gemma Maginnis,Marion Hunter and Frog Prince Hamlet Murazan. (Photo by Ross A. Benson)

“We purchased this play from a company in Camarillo,” Wescott said. “We have a selection of these musical performances we have purchased from them. We did this one about four years ago. We try to do a different one each year.”

Wescott believes the youngsters take what they’ve learned from the plays and apply it to the classroom curriculum.

“In the past we did a play about the western movement and they will come back the next year when it’s part of the social studies curriculum and they say they remember when the same things were mentioned in the play,” she said.

The chorus of the song that runs through the entire production hits a poignant note.

In one skit, “Magic Mirrors,” three students~Robert McGraham, Kate Outwater and Troy Outwater ~ wear cardboard squares covered in a reflective material, in a take on the story of “Snow White.”

The final line says “Honesty is the fairest of all.” 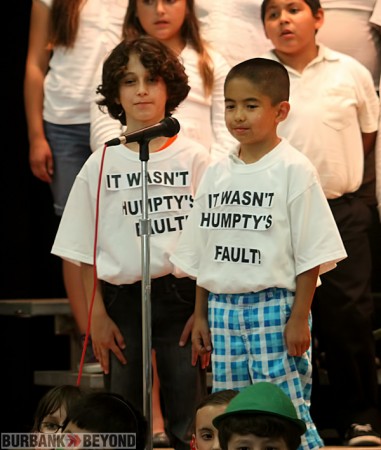 In another scene, Richard Solano plays Jack and Brandin Gustafson is the giant from “Jack and the Bean Stalk.”

“I learned that you don’t judge someone by how they look, but by asking them questions and finding out something about them,” Richard Solano said.

The final line is “Differences can be scary, but it’s cool.”

Parent Fran Martin said she was impressed with the acting. Her favorite scene was the one about Humpty Dumpty and his friends, she said.

“It was about taking responsibility and the little girl was blaming everyone but herself,” Martin said. “I thought that was really cute.”

Students in Carol Derry's second grade class take their turn in the Pumpkin Patch. (Photos By Ross A. Benson)

Nestled in a in an improvised field of straw and hay bales, guarded by several scarecrows and diligent parents, hundreds of pumpkins awaited adoption by eager students on Friday morning at William McKinley Elementary School.

In its 12th year, McKinley’s PTA Pumpkin Patch provides students and parent volunteers a break from the routine, giving children a taste of Halloween and American culture.
“Many of our students have never had a chance to see a real pumpkin patch” remarked event organizer Stephane McCorkle.  At the Pumpkin Patch, all McKinley students had a chance to rummage through the straw, picking out their favorite fruit.  “Everybody gets a pumpkin” confirmed McCorkle, ensuring a great time for all the kids.
As Mr. Danielson’s 4th year class approached, the ‘Patch was transformed into a sea of colors, laughter, giggling, teasing, and a scene of teachers and volunteers connecting with students.  Some explaining to critical children a bit of the history of pumpkins, taking patience describing the abstract of a farm to city kids, others helping youngsters pick out the perfect pumpkin for their prize.

Shannon Douglas, a volunteer at the ‘Patch and mother of a McKinley student praised the efforts of the McKinley PTA and teachers.  “This is the greatest school we have been to” said Douglas, “This is the hardest working PTA I’ve ever seen, and I am very impressed with the level of participation and positive attitudes of everybody in the school system.”

Volunteers started building the Pumpkin patch at 6 in the morning, all excited to bring this slice of happiness to McKinley students – although it was a bit difficult to determine who was having the best time, as parents and volunteers shared and traded laughter equally with the students.
As all the children showed off their trophies, teachers ensured no student, even those who were absent, lacked a pumpkin.  Then, as each student signed a large “Thank You” card for the PTA, volunteers prepared the ‘Patch for the next class of children cheerfully anticipating their time on the McKinley farm.

The Rock & Roll Concert sounds filled the air around McKinley’s grass field Friday evening when the PTA put on McKinley Rocks. This is the second year of the concert, and the funds raised will go to Arts at McKinley Elemementary School. McKinley kid bands as well as Parent bands entertained while people ate hamburgers, hot dogs, nachos, chips, drinks, cookies, and brownies. Many brought their own lawn chairs or blankets to sit on and were entertained.