Located on Burbank Boulevard just west of Buena Vista Street, MexCocina Cafe has won over some regulars already in the short time the diner has been open.

The restaurant offers a large menu for breakfast, lunch and dinner, and advertises healthy and fresh fare, along with some Mexican favorites. 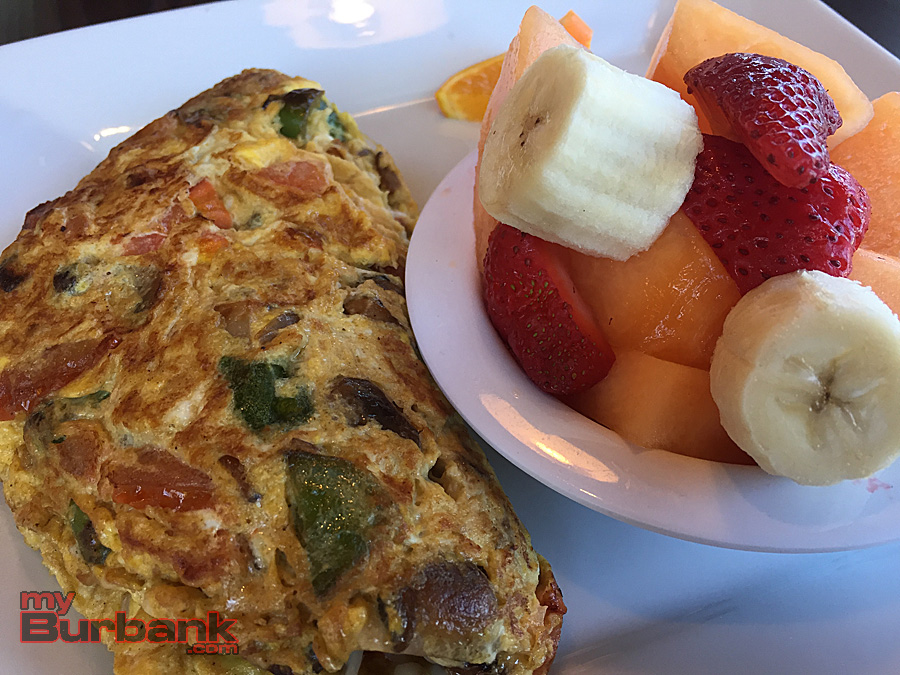 With a breakfast menu of omelets, a variety of pancakes and french toast plates and good old egg and meat dishes, MexCocina has something for almost everyone. Their veggie omelet was a little overdone, but filled with fresh vegetables and stuffed with avocado and Monterey Jack cheese. After adding a generous smattering of Tapatio, which is found on every table in the joint, the omelet tasted terrific.

After trying the restaurant’s carne asada sope and chicken taco, though, I was disappointed. The carne asada was fatty and grisly and the sope shell was too hard and stale, a big no-no for sopes. The beans and the flavors of the sope tasted delicious but both the red and the green salsa, while nicely spicy, were too watery for my taste. 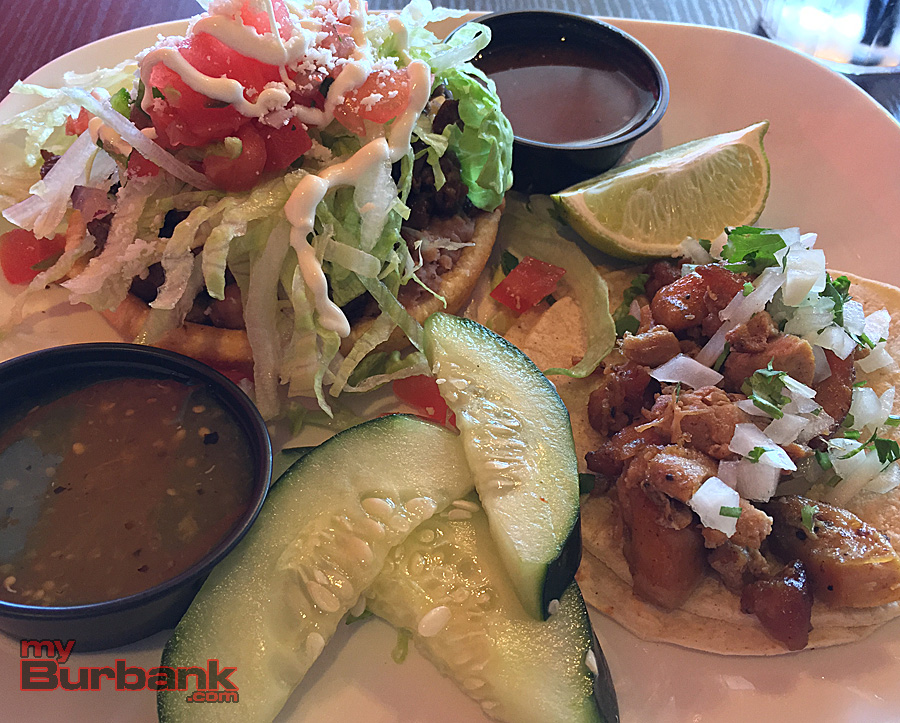 Sope and taco at MexCocina Cafe. (Photo By Lisa Paredes)

The chicken taco was dry. The meat was flavorful but dry. Adding salsa helped the moisture a little, but the overall effect was too dry.

The service is always very friendly and attentive and the bathrooms are clean. Parking in the lot can be a challenge but there’s plenty of street parking along neighboring blocks. 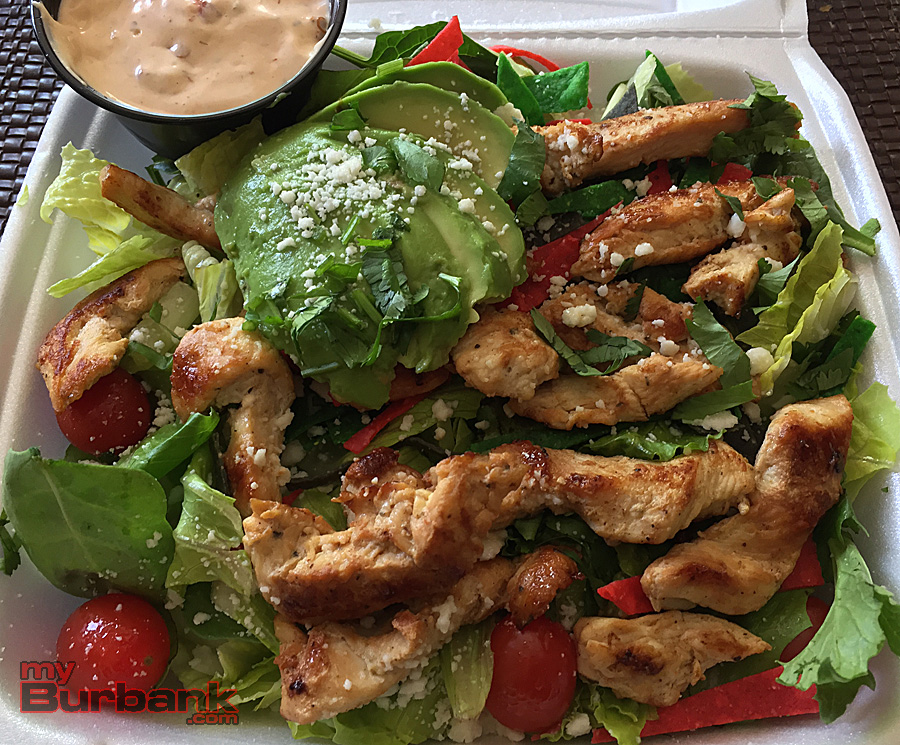 Although prices are not cheap, MexCocina Cafe does diner fare with a Mexican twist well. While I will continue to order my tacos and sopes from Taqueria El Tapatio on Victory, MexCocina offers some solid options for breakfast, lunch and dinner in Burbank.


MexCocina Cafe receives: On The Marquee

Open for just over two years in an unassuming little strip mall at the corner of Victory and Buena Vista, Taqueria El Tapatio serves up the best taco in Burbank, in addition to hitting the high points of authentic Mexican-American food with terrific sopes, burritos and ceviche.

For those who grew up or spent many years in the Mexican-American communities of Los Angeles, finding those staples of the diet can be hit or miss in Burbank. I have long, and only half-jokingly, stated the best tacos in Burbank are from my kitchen. I now have to amend that statement! 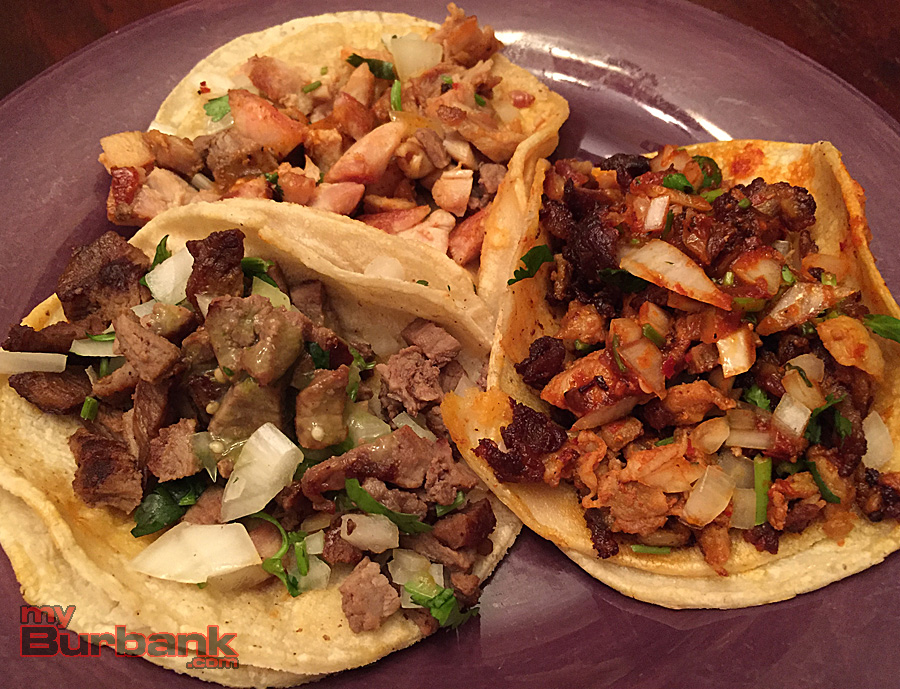 We have tried many places around Burbank, looking for great to-go or quick-bite Mexican favorites, only to feel like Goldilocks – this one was too dry, that one was too fatty or grisly, this one’s salsa is weak/rice is hard/beans are not right/tortillas are tough and so on and so forth. Some restaurants in town are excellent for table-service Mexican food, but often their to-go tacos become soggy on the drive home and fall apart. 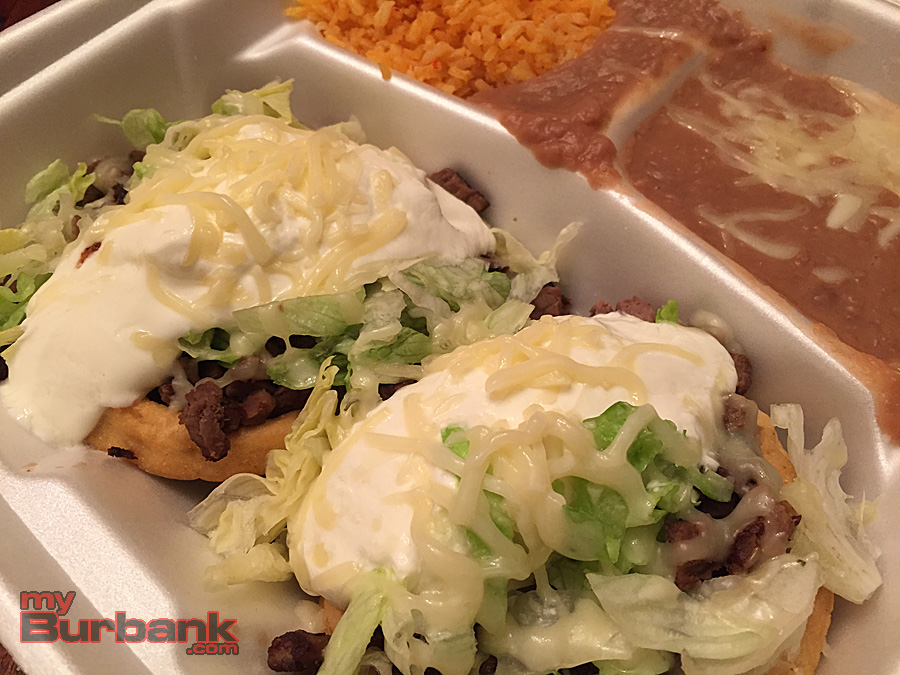 Taqueria El Tapatio’s meats indicate the quality of the restaurant – we have yet to find a chewy piece of steak, chicken or pork there. We recommend getting the tacos and burritos with everything, including onions, cilantro and accompanying salsa. The salsa provides the right amount of moisture, especially for the al pastor tacos.

Sopes are made a little differently from what we are used to, substituting crema and some melty cheese for the queso fresco. Still, the thick corn tortillas are tender and the whole messy enterprise is delicious and moist. Drop some chile verde on each bite, and your tastebuds will thank you. 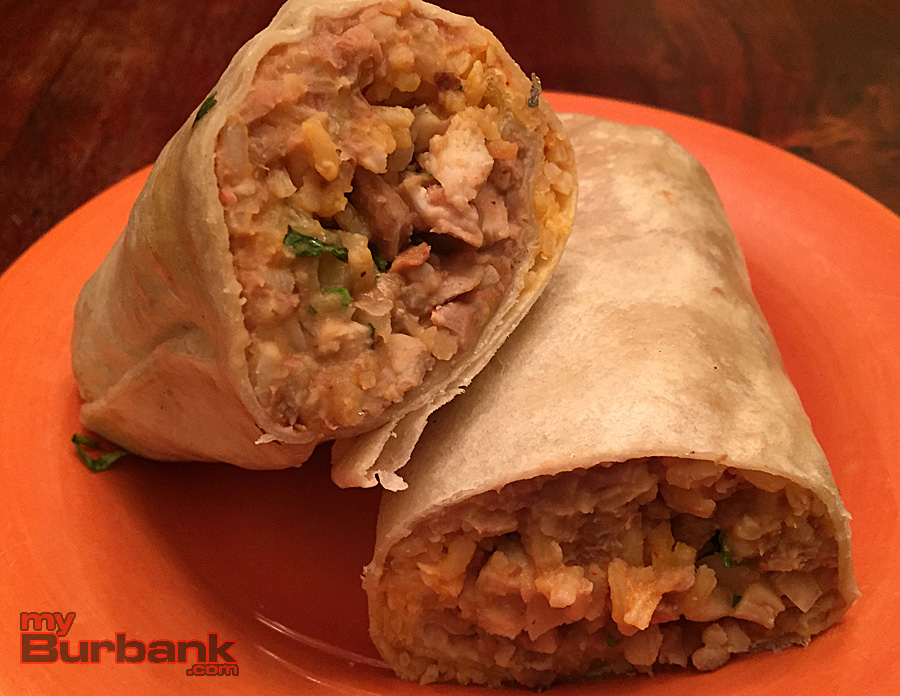 Burritos are solid, a perfect ratio of meat, rice, beans, onion, cilantro and salsa. Rice is tender and tasty and the refried beans are a nicely simple accompaniment.

Boasting an “A” rating from the L.A. County Department of Health, Taqueria El Tapatio is fast and clean. Their fresh salsa bar includes chiles rojo and verde, lime, pico de gallo and sliced radishes for cleansing the palate, along with pickled carrots, jalapeño, and potato slices.

A cold case of flavored Jarritos sodas, water, Fanta and Coke complements the fresh horchata and jamaica aguas frescas. Frequent specials of the day include chilaquiles and chiles relleno. The restaurant also offers some breakfast options. 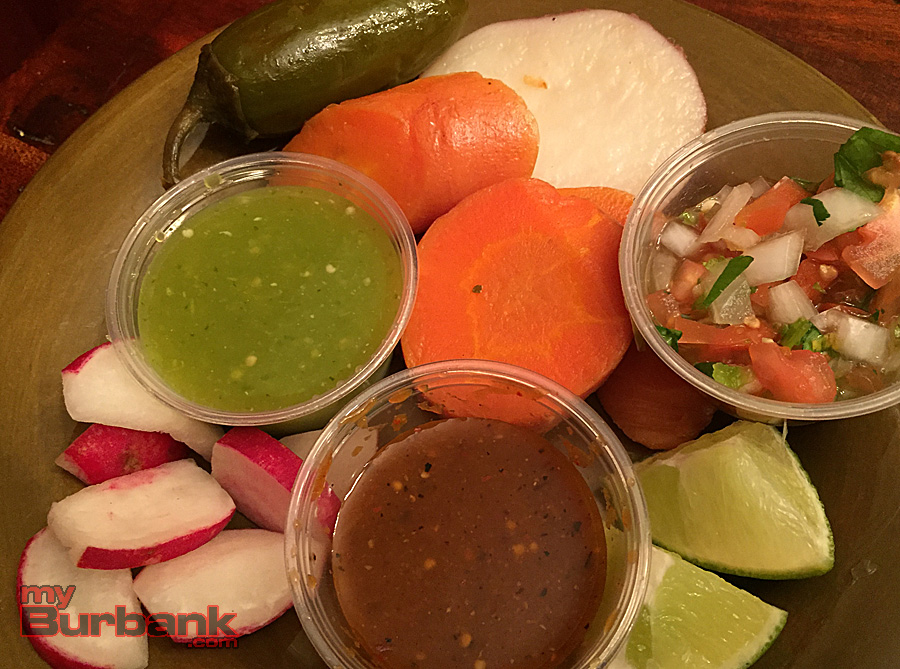 Taqueria El Tapatio doesn’t have a website or an online menu and the owners don’t really maintain a social media presence. That’s okay, because they don’t need to do all that. They just make really excellent, authentic and fresh Mexican food.

We look forward to trying out the rest of the restaurant’s menu… fish tacos, shrimp cocktail, shrimp with chile or with garlic, fajitas, echiladas, tortas and more. The restaurant offers a variety of vegetarian options, too.

Taqueria El Tapatio receives a Tops In Town for the best tacos and solid Mexican favorites in Burbank. 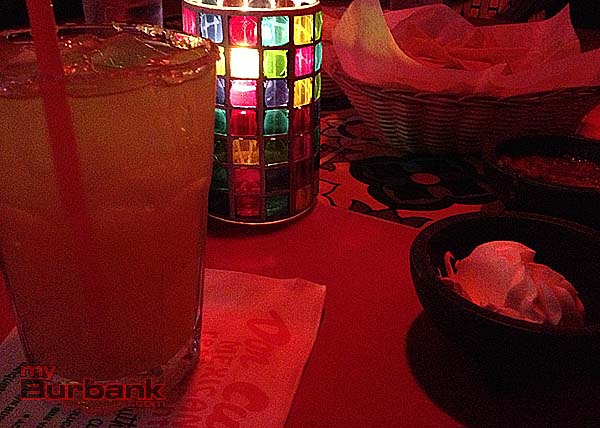 The extensive menu can make for hard choices. Small or large plates, salad, vegetarian, meat or seafood options abound. Both the Tropical and the Caribbean Chicken Salads are delicious and hearty. Even the side salad is fresh and tasty, for those who aren’t in the mood for soup. The soups, though, are the thing. 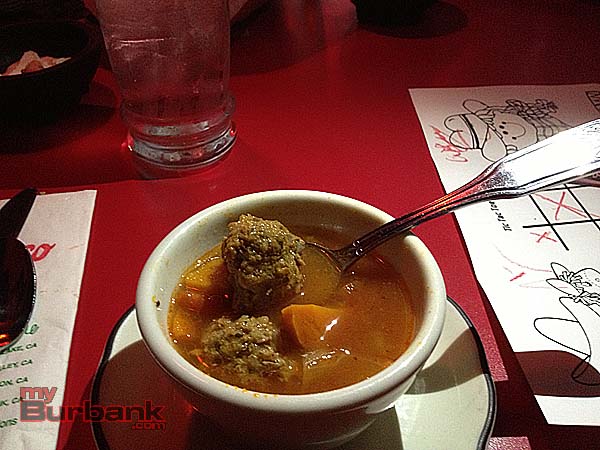 Be it Albondigas or Chicken Tortilla, Don Cuco makes these two soups to perfection. Perfectly seasoned, with a complement of textures and flavors, I advise you to include a cup of soup in your order. 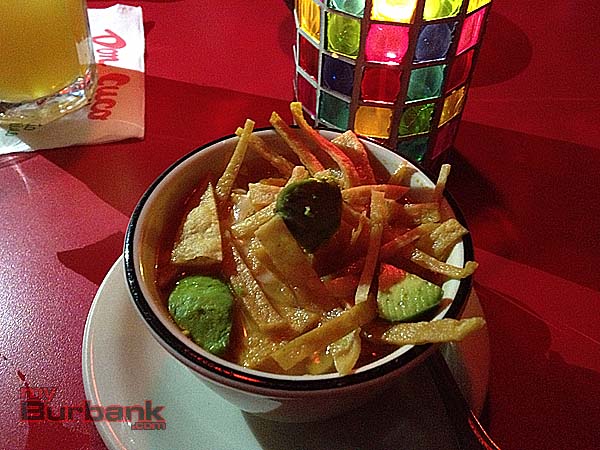 We have had a variety of meats and seafood over the years at Don Cucos. The menu offers something for everyone, from the tried-and-true basic enchilada, burrito and crispy or soft taco to a variety of fish (already fileted), shrimp and lobster plates to a selection of meats prepared just about every way imaginable. While Don Cuco offers Camarones al Mojo de Ajo and some other authentic favorites, I haven’t seen any whole fried fish, like Mojarra Frita, brought out for the diner to filet themselves. 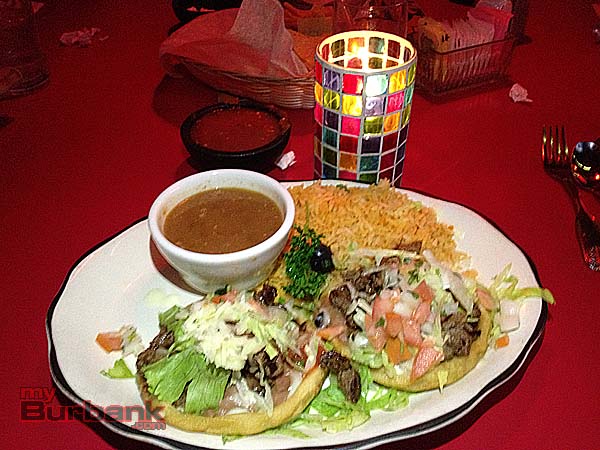 I do wish Don Cucos would try to have some weekly specials, like nopales stuffed with cheese and topped with a savory chile verde (a favorite of mine I have only found at Mi Casita in Sunland) or pork and diced nopales simmered in a spicy chile rojo, served with warm tortillas.

While including some great options for expanding your palate, the Don Cuco menu is aimed towards satisfying the tastes of its main clientele, of all ethnicities, who tend to prefer more of the greatest hits of the Mexican food world – tacos, burritos and enchiladas –  along with the huge variety of beer, tequila and margaritas. However, Don Cuco serves those mainstays and its deeper menu with style and flavor that even the most die-hard traditionalist can accept. 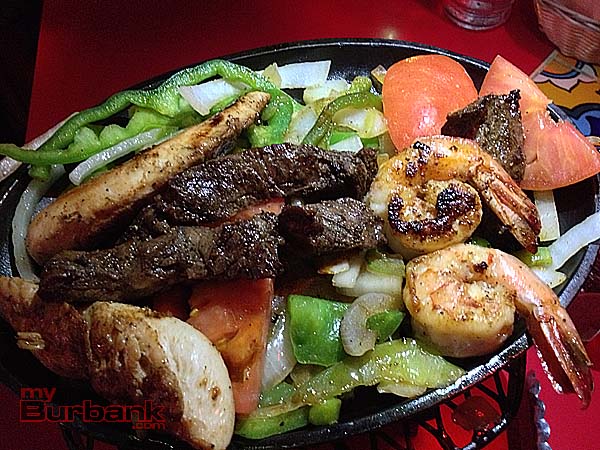 I’ve enjoyed lobster salads, shrimp enchiladas and more entrees at Don Cucos as well, but the favorites we keep coming back for are the Fajitas Combo, the Steak Milanesa and the Carne Asada Sopes plates, all served with Frijoles de la Olla (beans from the pot, usually topped with diced onion and cilantro), rice, guacamole and warm flour tortillas.

Don Cuco does red meat right; they use quality cuts and fresh ingredients. The Fajitas Combo mixes some of the best tasting chicken I’ve had in a while alongside some of the most tender steak and flavorful shrimp. Try the Frijoles de la Olla once; you will never look at refried or black beans the same way again. 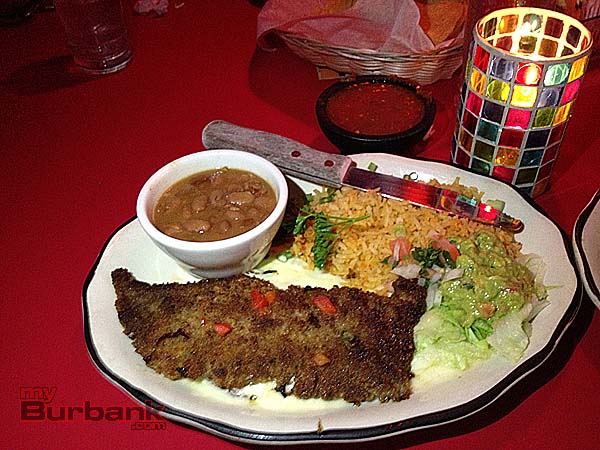 Steak Milanesa hides a surprise of a potato slice and melted cheese underneath. Frijoles de la Olla takes the plate to the next level. (Photo By Lisa Paredes)

The variety of tequilas offered is expansive and so are the flavors of margaritas. The only wavering quality issue I’ve ever had at Don Cuco is with the Cadillac margarita – sometimes made perfectly, other times a bit off – the consistency in taste for that drink is just not there. The fruity margaritas are dependably delicious and quite powerful, too.

While there can be more of a wait at the smaller Don Cuco in Toluca Lake, seating moves quickly, even on crowded evenings at the Downtown Burbank location. Both Don Cuco Restaurants have all the options covered when it comes to pleasing just about any palate. Two separate locations means there’s a lot of Don Cuco to go around, even though both restaurants can be quite busy around mealtimes and into the evening.

Don Cuco is Tops In Town when it comes to finding a sit-down Mexican restaurant in Burbank. Prompt and attentive service, friendly wait staff, clean bathrooms and plentiful portions help make this restaurant a hit. But it is the food, from the chips and salsas, to the soups and guacamole, to the tortillas and the perfectly-made Frijoles de la Olla, to the huge selection of entrees and quality ingredients that seal the deal. Salud!