Burbank Mayor Jess Talamantes was joined with Mickey & Minnie Mouse,  Santa & Mrs Claus along with Emcee Galen Gering from Days of Our Lives, and hundreds in lighting Burbank’s Official Tree. They then proceeded to San Fernando Blvd for plenty of activities. 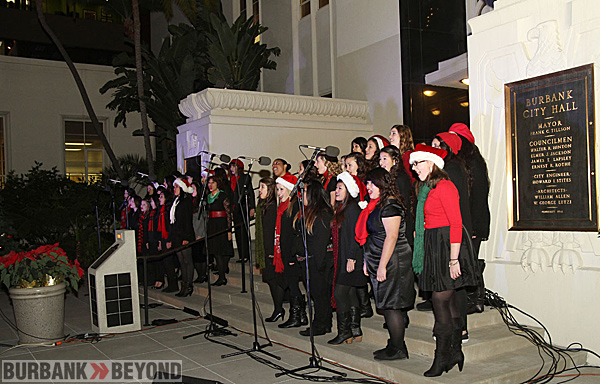 Burbank High School's Award Winning Choir. The event was on the steps of City Hall and along San Fernando Blvd on December 1st. (Photo by Ross A. Benson)

Every tile in the City Hall fountain gets cleaned up for the arrival of Santa & Mrs Claus & Mickey & Mini Mouse. (Photo by Ross A. Benson)

Burbank City Hall is getting all decked out for The Mayor’s Annual Christmas Tree Lighting Ceremony this Thursday.

Although Burbank’s City Hall isn’t as old as Santa and Mrs Claus, having been built in 1941 and completed and occupied in 1943, it did need a little touching up in places.  This week City crews were preparing for this year’s event. The fountain, for instance, has grout between every tile and needs cleaning.  The fish that squirt water not only get cleaned but the brass around the fish’s mouths get a good brushing.

Forestry Division's Javier Vasquez strings some of the thousands of light that are on this years City Hall Christmas Tree. (Photo by Ross A. Benson)

The Park and Recreation and Community Services division are responsible for getting the tree and making sure it arrives on time. Their crews not only assisted Castella’s Trees to put it into place, they then decorated it.  This year forester Javier Vasquez made sure the star that sits atop the tree properly faces North.

Joining Mayor Jess Talamantes will be Santa and Mrs Claus.   Mickey and Minnie Mouse will make an appearance.  They will all be entertained by the voices from the Burbank High’s award winning choir.  Master of ceremonies for the event will be Galan Gering from “Days of our Lives.”  The fun all kicks off in the street in front of Burbank City Hall at 6 p.m. this Thursday. 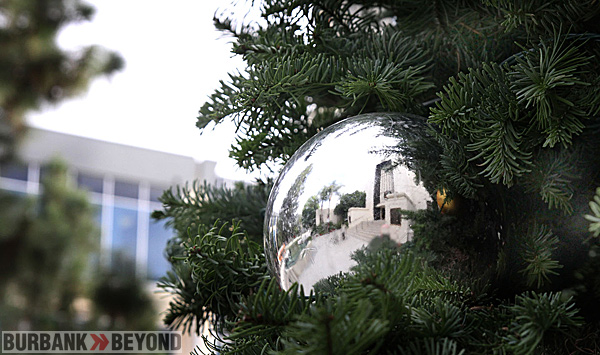 The tree might appear to be smaller but the decorations are huge. (Photo by Ross A. Benson) 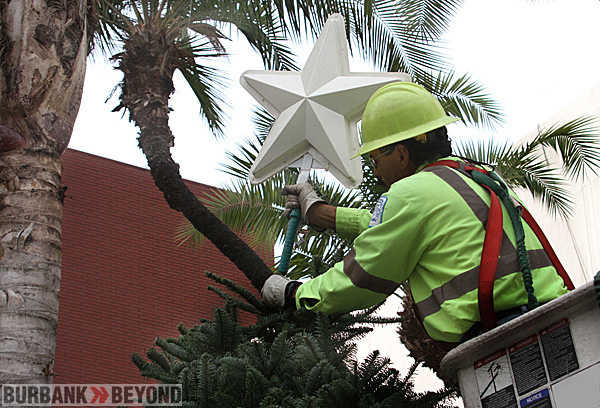 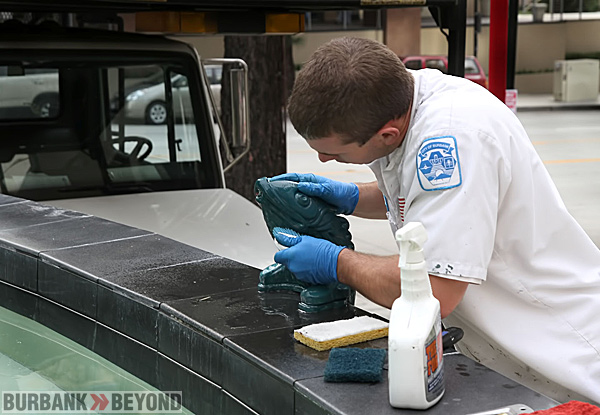 Even the fish that sprout water get their teeth brushed before Thursday's big day. (Photo by Ross A. Benson) 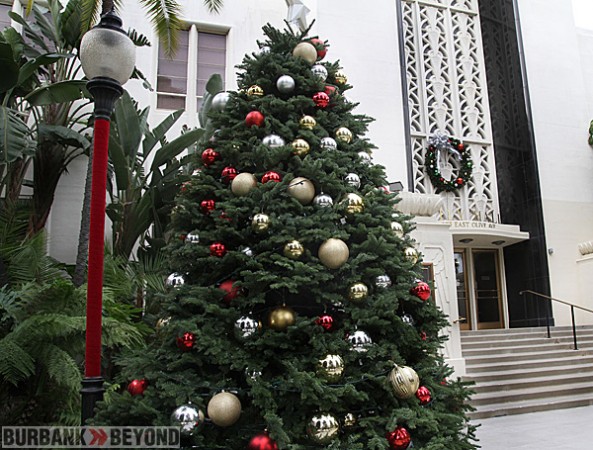 The City Hall Christmas Tree is all decked out for Thursday's Tree Lighting Event where Santa & Mrs Claus along with Mickey & Minnie Mouse will preside. (Photo by Ross A. Benson)