One week remains in the season before the CIF Southern Section girls’ tennis pairings and seedings will be announced.

Meanwhile, the Burbank High team is trying its best to get a good seeding and a fourth place finish in the Pacific League after handing host Burroughs a 15-3 loss on Thursday afternoon by garnering seven points in doubles play and six points in singles action. 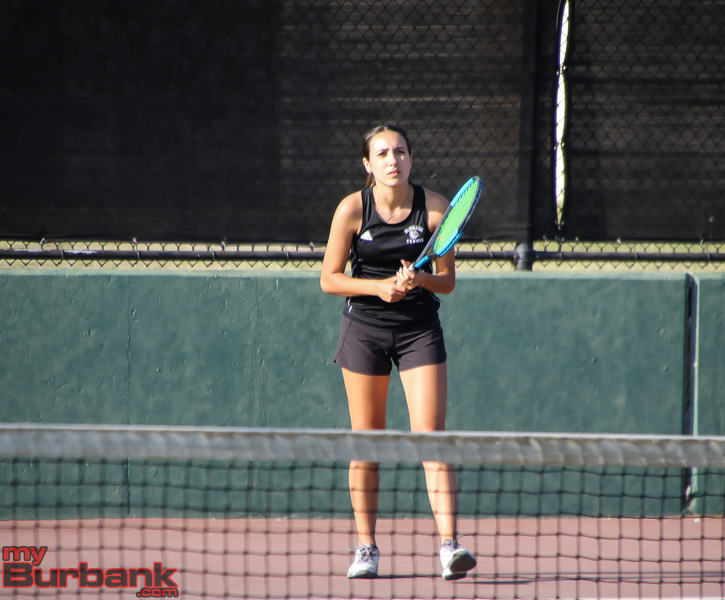 “I thought it was a lot closer than the final score, especially after that first round,” Burbank coach Loi Phan said. “After that round then we kind of relaxed. It’s always a good win against your rival.”

When Kirakosyan is on her game, the senior is very difficult to knock off and Thursday was one of those days, as her serve was on the money and her ground strokes were equally on target, which made it a long day for her opponents.

The Bulldogs also claimed two more points by No. 2 singles, junior Siya Joshi, who grabbed two sets at 6-4 and 6-4.

Burbank nabbed one point when No. 3, sophomore Lilyan Hawrylo prevailed 7-6 (6-4).

The Bulldogs also received three points and a sweep from their No. 2 doubles squad of sophomore Elli Sumera and freshman Nairi Zeytounian, who went 7-5, 6-4, 6-2. 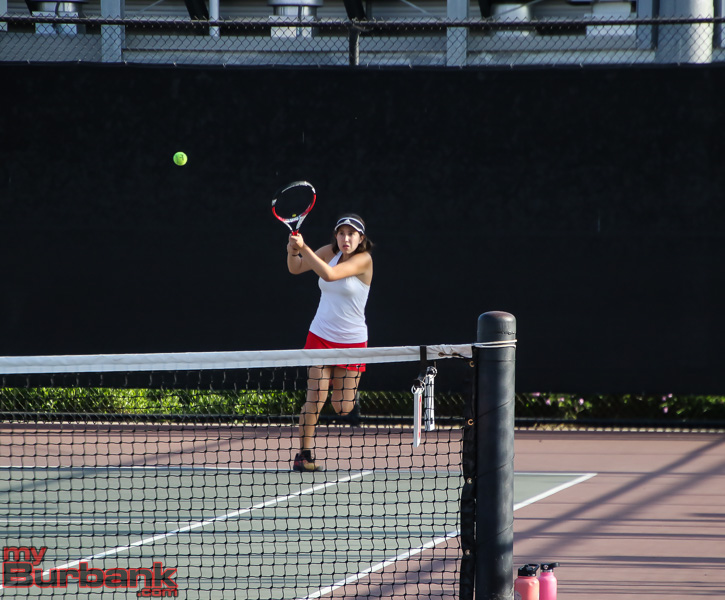 Burroughs played well in the first round against visiting Burbank, but fell 13-5. (Photo by Ross A. Benson)

The No. 3 doubles duo for the Bulldogs, sophomore Meeneh Mirzains and sophomore Monique Saroyan, also collected two points after winning a pair of sets at 7-5 and 6-3.

Burroughs didn’t play any nonleague matches, which could have provided valuable experience for a young team, which longtime coach Roy Bernhardt has.

Instead, the Indians, who are 2-8 in league, began league action against good opponents and without much of a warmup.

The Bulldogs are 8-5 in all matches and 5-5 in league play and has a match versus at Glendale next Thursday, which will determine which team finishes fourth.

In an earlier meeting between these two, Glendale prevailed 12-6 at Burbank, but the Bulldogs hope to turn the tables this time. 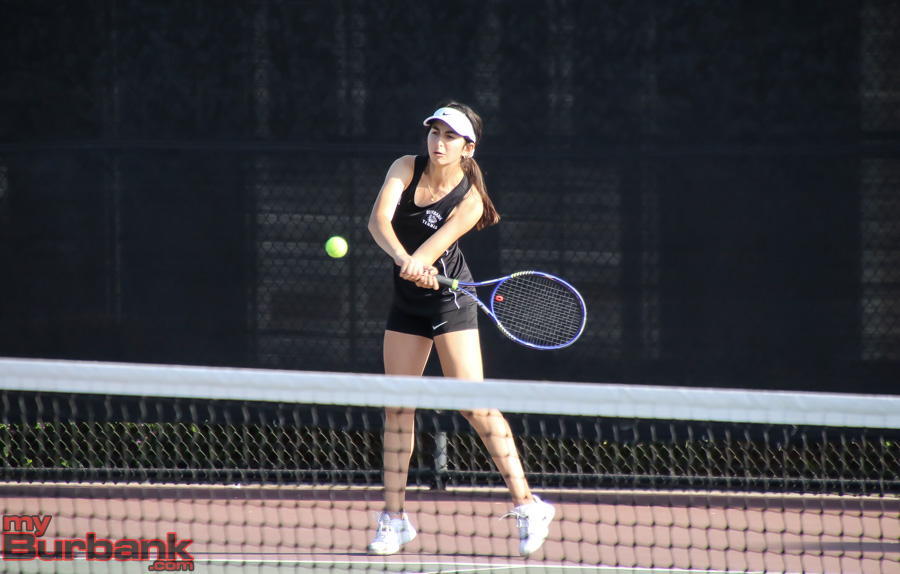 The Bulldogs captured seven points in doubles play and six in singles versus the Indians. (Photo by Ross A. Benson)

For the Indians at No. 1 singles, sophomore Isabella Harris-Bermudez also had a fine showing, as she lost 6-1 versus No. 1 and won against No. 3, 6-3.

“Against No. 1, I could have done a lot better. The No. 3 player was really good too,” Harris-Bermudez said of her two sets.

At No. 2 singles, sophomore Lauren Pieri also picked up a point for Burroughs after winning a set 6-1.

“Overall it was a good day, but it could have gone better,” she said. “I played pretty well, but think I could have moved around a little faster in general.”