Cartoon Network partners with 10-year-old Stevenson Elementary School student to produce an animated short film based on the student’s story. The whole family got into the act as her parents and sister voiced the characters in the film. The fourth- and fifth-grade classes saw the premiere of the film on Open House.

By Joyce Rudolph
BurbankNBeyond
Lillian Hughes, her family and her fourth- and fifth-grade classmates at Stevenson Elementary saw the world premiere of the animated short “Mr. 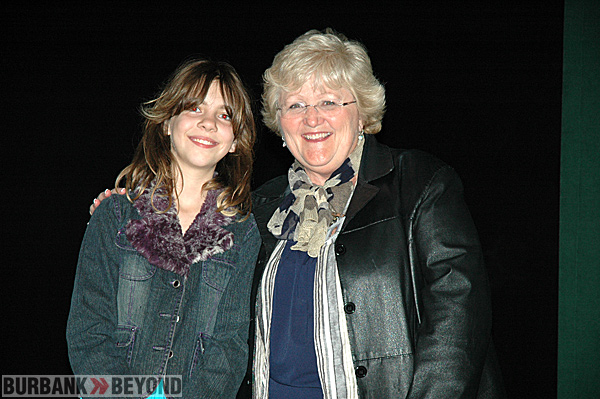 Stevenson Elementary School student Lillian Hughes, 10, with her Principal Debbie Ginnetti at the premiere of the animated short "Pike" that she wrote and directed. Cartoon Network produced the short. (Photo by Joyce Rudolph)

Pike”, written and directed by Lillian, in the auditorium during open house on May 1. Cartoon Network Studios produced the piece, as part of the Young Writers Program, and representing the studio at the premiere was Zita Lefebvre.

It was an exciting moment for the 10-year-old

“When the film started, my heart was beating real fast,” Lilli said.

The project began in the fall as a creative writing initiative for fourth- and fifth-graders and is part of 10-year partnership between the animation company and the school. Students were asked to write an imaginative narrative story and include illustrations of the characters, said Principal Debbie Ginnetti. It allowed them to expand their own ideas and imagination, she said. 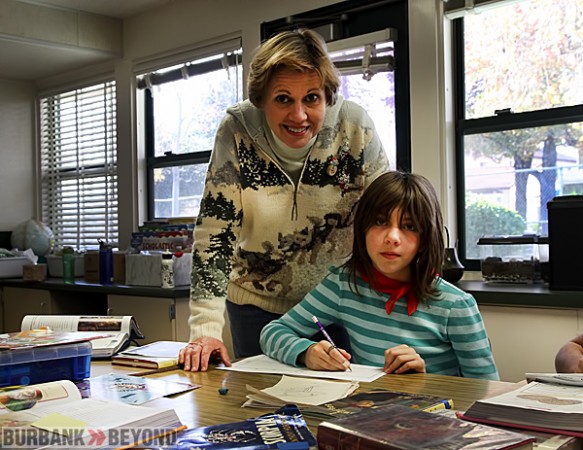 Lillian Hughes and her 5th grade teacher Miss Goulding, working on her Mr Pike story.(Photo by Ross A. Benson)

The teachers and principal judged the stories and narrowed the field to five and Lilli’s was deemed the top piece, earning her the chance to have the story turned into a two-minute animated film.

She worked with Cartoon Network illustrator Dave Smith to draw the story board and directed her family in voicing the characters.

“The project showed the students the reality of what writing can do for you,” Ginnetti said. “This assignment meshed art and writing.”

Reading and writing have always been an important part of educating students for Ginnetti. Early in her teaching career I had the opportunity of working with her and another teacher Mikki Bolliger on
a writing project. Elementary school students were invited to write about a chosen topic once a month in the “I Have a Tale to Tell” writing program.

Her parents said Lilli has been writing since she was very little. 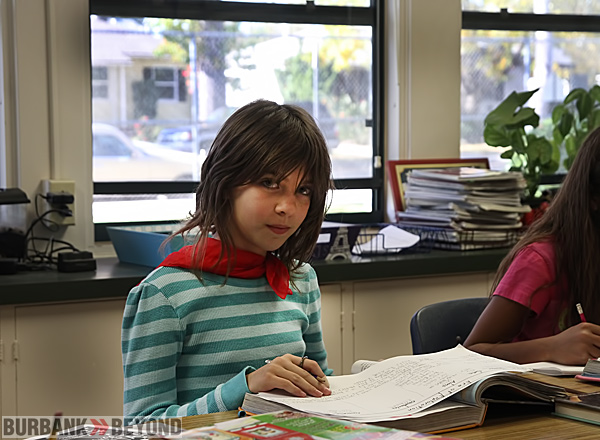 Lillian Hughes works on her Mr. Pike story. (Photo by Ross A. Benson)

She learned to tell stories and draw by watching Cartoon Network’s the Powder Puff Girls, said her father Robert, who is a director with Disney’s “Phineas and Ferb”.

“She paid them back by making the film with them,” he said.

Lilli’s family members provided the voices for the characters. Her father supplied the voice of Mr. Pike, the substitute teacher. And mother Jennifer spoke the lines for Mrs. Ash and Chess Wood.

“It is just the best to see any kid’s project get this kind of recognition, but to see your kid honored like this, that’s the highlight,” Jennifer Hughes said.

“It was weird to have my voice coming out of someone else,” Phoebe said.