It took more than 11 hours to complete the Burbank versus Muir High football game.

But it took just one decision with 11 seconds left to seal the fate of the final result.

In the end visiting Burbank held on for a 15-14 Pacific League victory Saturday morning.

The game was halted at halftime on Friday night due to lightning. The second half began at 8 a.m. Saturday.

Electing not to kick a field goal with no timeouts left, 11 seconds on the clock and the ball at the 11-yard-line, Muir quarterback Brian Love was sacked by Burbank’s Duncan Smith and the clock ran out on the Mustangs.

“The coverage was great on that last play, so it allowed me to get a sack,” said Smith, who has committed to play at UC Davis next year.

“The defense is our calling guard. They kept us in the game when the offense was sputtering,” Colman said. 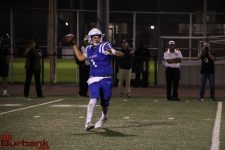 Burbank (5-3, 3-1 in league) scored what turned out to be the winning touchdown with 3:11 left as Matthew Porras found Smith on a 17-yard pass at the back of the end zone. Burbank failed on the two-point conversion that would have given it a three-point advantage.

The Bulldogs began the drive at the 11-yard line and had to actually move the ball 98 yards down the field after a penalty pushed them back to the 2.

Colman said it wasn’t easy going to sleep and then coming back to play so early in the morning.

Burbank opened the scoring with 7:51 left in the first quarter as Porras found Chadz Vang on a 10-yard touchdown. Burbank failed on the two-point conversion. Porras finished the game 16 of 30 for 245 yards with two touchdowns and one interception.

He later hooked up with Caleb Snowden on a fine 20-yard strike to put the Mustangs ahead with 3:03 left in the first half.

Turnovers on both sides gave each team golden opportunities to push ahead. But the defensive efforts were superb for both teams.

Erik Harutyunyan had an interception and stripped a Muir player of the ball. Offensively he had seven receptions for 101 yards.

The defense hasn’t been the problem for the Burroughs High football team in recent weeks.

That was the case again Friday when the Indians faced Muir High.

Unfortunately turnovers put the Indians in a few situations that proved costly in a 36-0 loss.

“We didn’t execute. We’re doing things defensively. We have to move the ball on offense. I’m going to look at it and fix whatever the problem is,” Burroughs coach Rand Holdren said.

Aiden Forrester got the first interception, which was late in the first quarter.

Henry Diaz then got a second-quarter interception that was deep in Muir territory.

Burroughs had the ball at the Muir 18-yard line, but could not punch its way onto the scoreboard.

Muir’s first touchdown came on a 33-yard run from Jahlique Stephens. Stephens is a rare four-year varsity starter as he played his first two years of his high school career at Arcadia High. 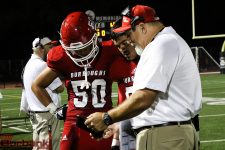 Muir went up 14-0 at the 3:43 mark of the second quarter when Calen Bullock picked up a fumble by teammate Aryonis Harrison and raced to the end zone.

The Mustangs took advantage of a Burroughs turnover to add a 19-yard field goal as time expired in the first half.

Shull returned the interception 45 yards for a touchdown.

Burroughs’ Luke Rogers carried the ball 21 times for 49 yards to lead his team.

Stopping Muir High running back Jonathan Stephens is something that has gotten more difficult over the years. 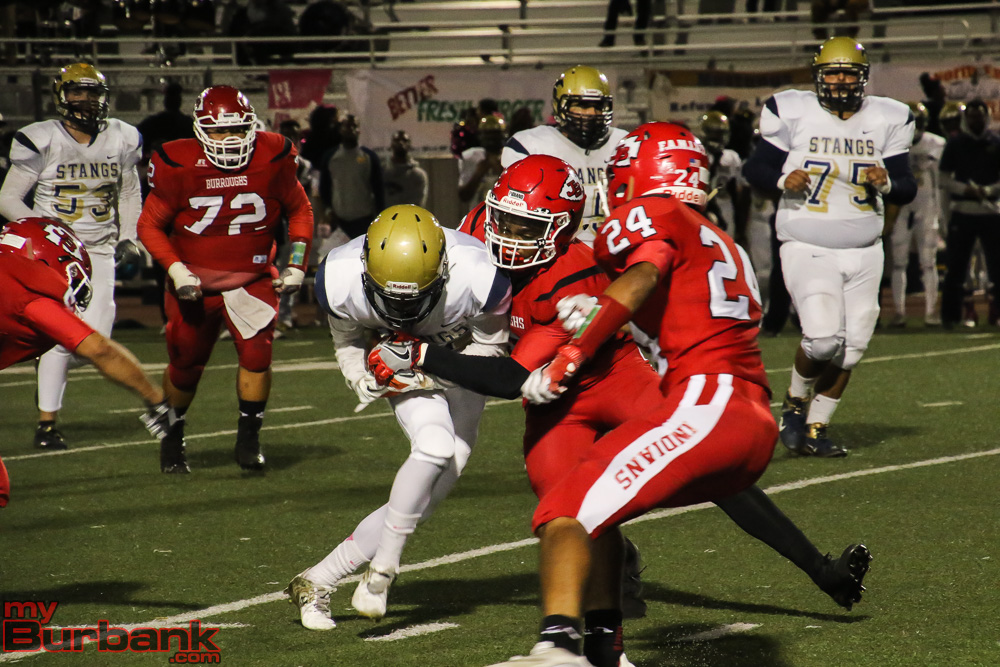 Now a senior, the fourth-year varsity player got the upper hand on Burroughs High Friday as he helped the visiting Mustangs defeat the Indians 40-17 at Memorial Field.

“That running back was a load. He was a very physical, tough runner,” Burroughs coach Mike Reily said. “He did some great things.”

The loss put Burroughs (3-4, 2-3 in  league) in a very difficult position if it is to make it to postseason play.

“We’re taking it one game at a time and are just trying to execute our game plan,” Reily said. “We had some kids who were a little banged up tonight. We need to assess those injuries and those injury reports and kind of go from there.”

Burroughs got on the board first as Jonathan Rivas kicked a 34-yard field goal with 8:36 left in the first quarter.

But Muir used its passing game to score a pair of touchdowns to go up 14-3. 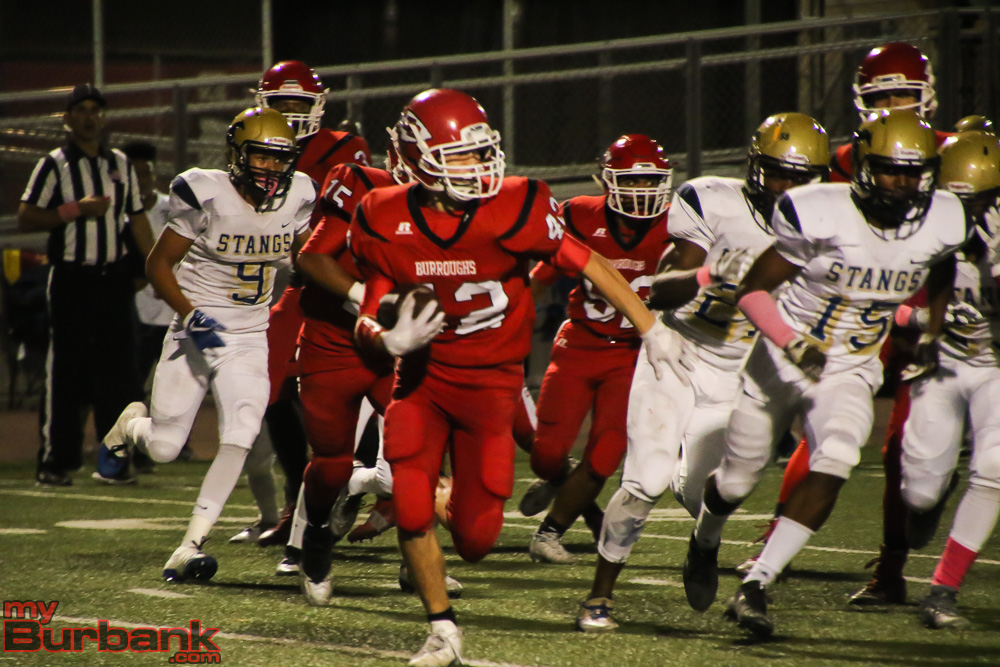 But then Stephens, who finished with 200 yards rushing, started making things more difficult for the Indians.

Peters scored his second touchdown at the 4:03 mark in the third quarter, running in from eight yards out.

But Stephens countered with his second touchdown, a four-yard run with 8:31 left in the fourth quarter. 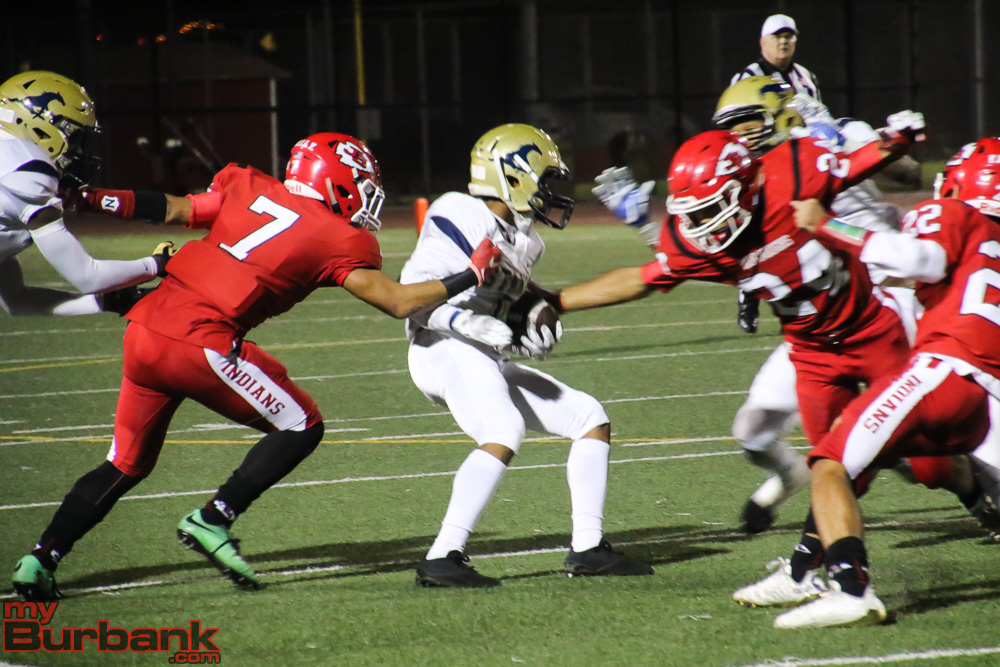 “We just trying to build as a team and get better,” said Stephens, who also assessed his team’s playoff aspirations. “The mentality of our team is win or go home.”

Burroughs will host Hoover High next Thursday at Memorial Field, before facing off against Burbank High in the regular season finale on Nov. 3.