“I wanted to share my love of music with the community of Burbank,” commented event organizer and Burroughs High School sophomore Maya Paredes. “I have seen first hand the work Education Through Music – LA does in our local schools and wanted to encourage people to donate and help support music education in public schools.” 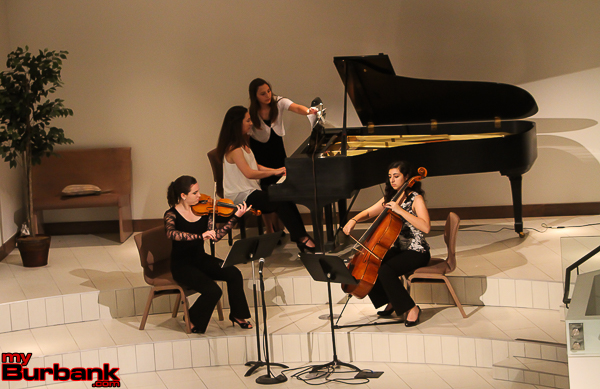 Chalifour, concertmaster of the L.A. Philharmonic for 20 years, performed some selections from the widely-enjoyed Bach Partita for Violin No.3. His engaging style, seen up close, thrilled many in the audience, who have usually only seen him perform from afar at the Hollywood Bowl and Walt Disney Concert Hall.

The concert drew nearly 100 members of the Burbank community and from throughout Los Angeles and included a program of folk songs, chamber music and piano and violin solos. Held in the acoustically-resonant and stunning Sanctuary of the First Presbyterian Church of Burbank, the Summer Music Soiree wowed attendees with the level of musicianship and performance. 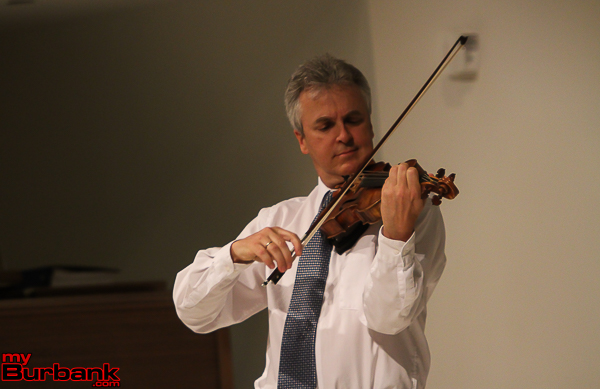 The exquisite and dramatic Sergei Rachmaninoff Piano Trio No. 1 Elegiaque was an audience favorite. The Rachmaninoff was played with finesse by the chamber music trio of UCLA sophomore violinist Sarah Worden, a former Concertmaster of the Glendale Youth Orchestra, and Chaminade High School junior cellist Veronica Mansour with Maya on piano.

The Johannes Brahms Cello Sonata No. 1 was another selection that brought audience members to their feet in applause. Veronica and Maya played the Brahms chamber music composition for cello and piano with emotion and musicality. 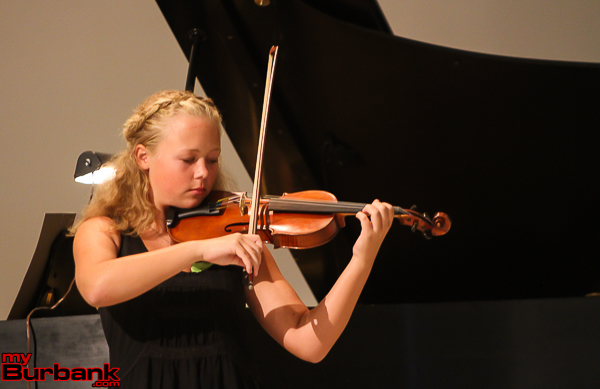 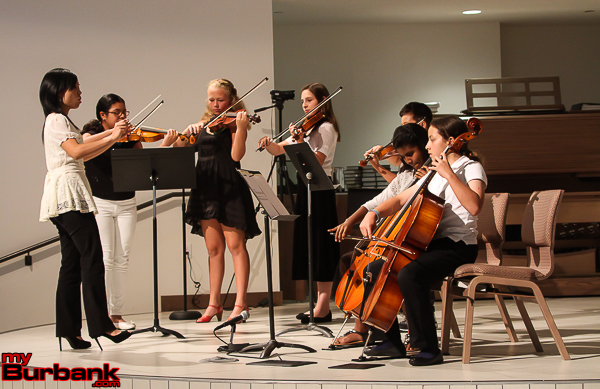 Maya demonstrated her love of performance and eight years of serious piano study with her parts for the Piazzolla, Rachmaninoff and Brahms. She concluded the concert with the showy Felix Mendelssohn solo piece Rondo Capriccioso.

Education Through Music – LA currently provides music instruction to all fourth- and fifth-graders at Providencia Elementary in addition to Kindergarteners and first- graders at Washington Elementary. Part of the ETM-LA instruction in Burbank Unified includes an elementary strings program taught by Megan Shung Smith. 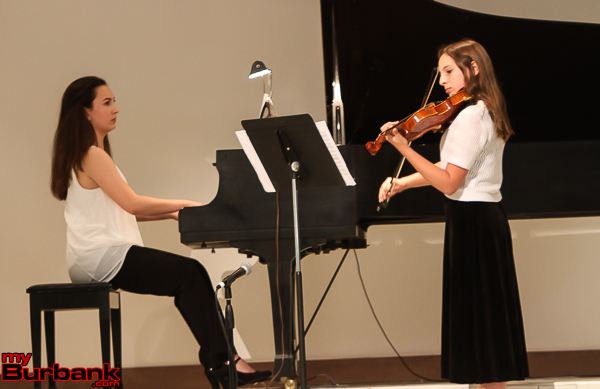 Both Maya and Ella have coached the Providencia strings students in previous years. Also a seasoned cellist with the Glendale Youth Orchestra, Maya had her first experiences learning violin and cello in her elementary school orchestra.

“We are so proud and touched by of all the young artists who gave their time to help keep music in our schools,” said ETM-LA Executive Director Victoria Lanier. “It’s great to see teenagers like Maya take the initiative to do something positive for their community and to be a role model for others.” 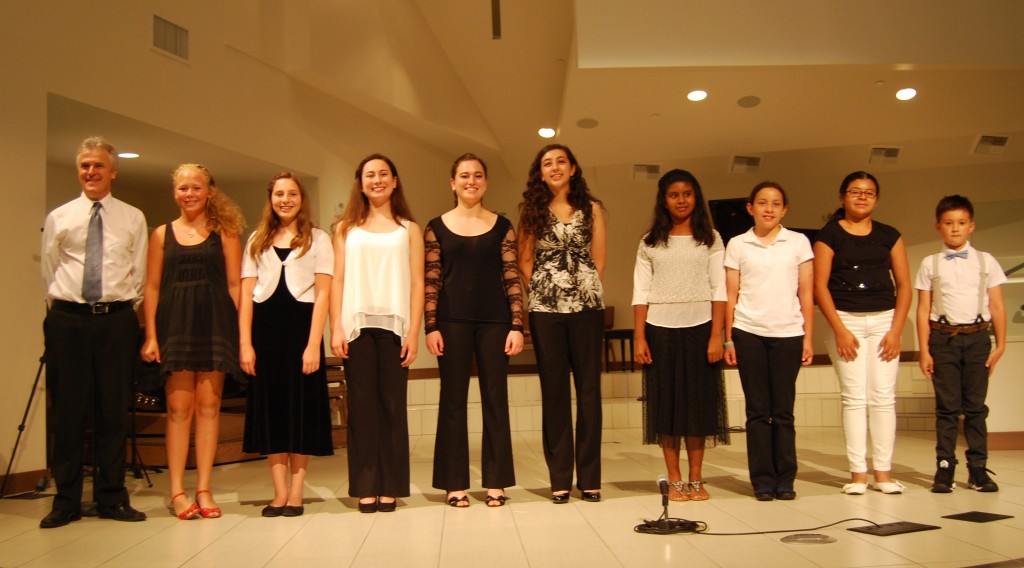 “We’re also so grateful to Martin Chalifour for continuing to champion music for all children and sharing his brilliant artistry with us.”

ETM-LA currently serves more than 7000 students at Title 1 schools in the Los Angeles area and, Lanier added, “As ETM-LA embarks on our 10th Anniversary Year, our goal is to expand our reach to serve 20 schools and approximately 10,000 children.”

Maya hopes to organize more free concerts like the Summer Music Soiree for the Burbank community in the future, improving access for all ages to hear and enjoy classical and other styles of music.

ETM-LA student Natalie Perez from Providencia Elementary is joined by Ella Jennings and Eyen Paredes in the violin section. (Photo by © Ross A. Benson)

L.A. Philharmonic Concertmaster Martin Chalifour played some selections from the Bach Partita for Violin No.3. (Photo by © Ross A. Benson)

A standing-room only crowd spilled out into the hallway, as interested parents, school board officials, city council and school board hopefuls, Burbank Unified teachers and administrators and Burbank Arts For All Foundation members listened to a panel discuss BUSD music education Wednesday evening, January 21, in Roosevelt Elementary’s music room. 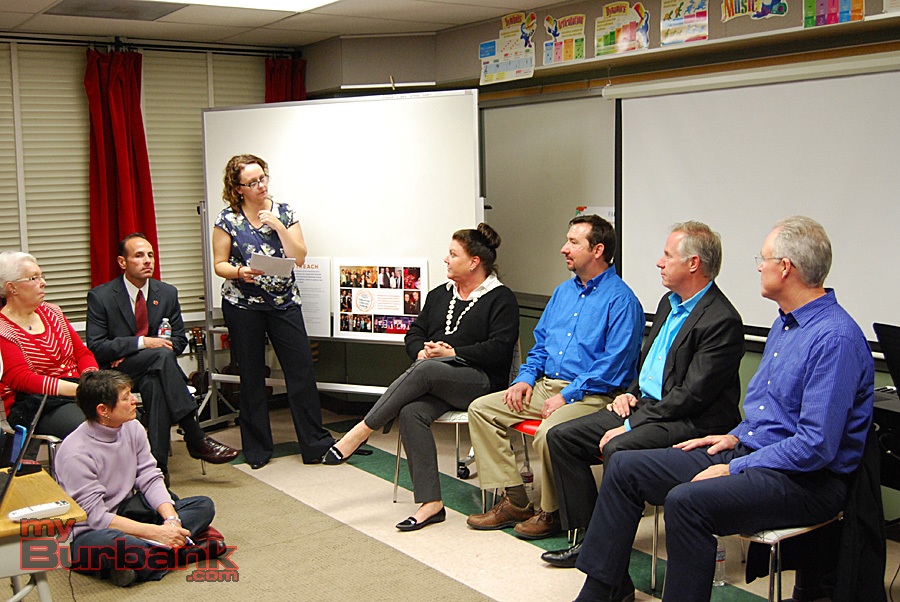 Flynn gave a brief outline of the history of BUSD music education programs over the past two decades. She emphasized that the second most requested item for funding in the LCAP survey held in 2014 was more music education in the schools.

Flynn noted that the priority placed on music education by parents, teachers and members of the community in the LCAP survey resulted in the hiring of two additional music teachers at the elementary level by the district for the 2014-15 school year, with plans to hire an additional teacher for the 2016-17 school year.

After weekly elementary music instruction is implemented and sustainable, Flynn said, adding string programs to Luther, Jordan and Burroughs and weekly instrumental instruction beginning in grade five and adding younger grades, working backward, would be goals. She did acknowledge those additional goals were not easily obtainable with current funding. 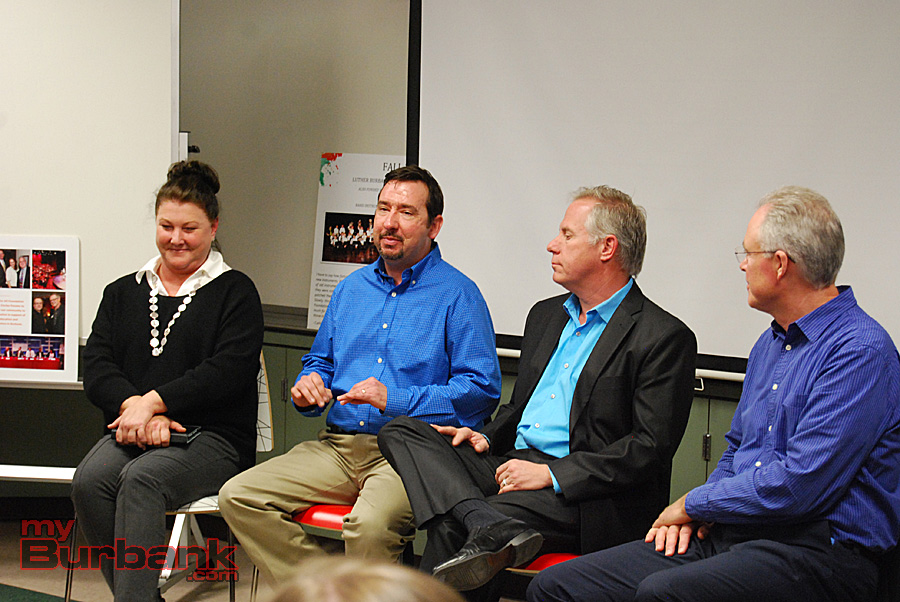 The three BUSD teachers on the panel talked about the importance of music in the school curriculum and discussed aspects of their teaching at the elementary, middle and high school levels.

Hollis mentioned that during the school year when students start learning about fractions in math class, he starts to see “light bulbs going off” in his music students, as they relate fractions to note values. He also sees connections and overlap with his music class and topics students learn not only in math, but in history and language arts. 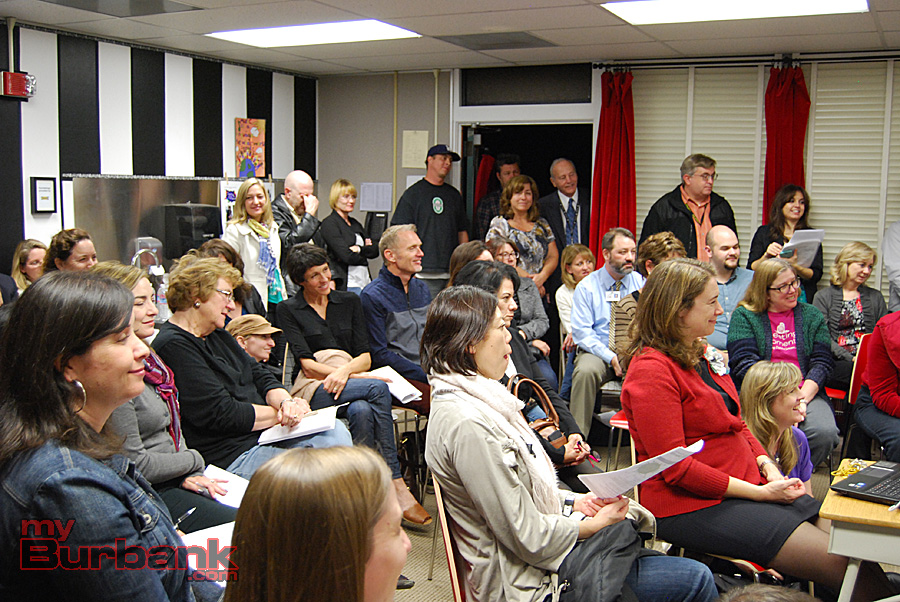 Whitener discussed the comprehensive band program at Jordan, noting that while “the vast majority of students in middle and high school music programs don’t go into music after school, they do become consumers of music” and perhaps continue to play an instrument for fun or in a garage band.

“We want to equip them with the information and techniques and skills they have to apply to any style of music,” Whitener added, explaining he teaches students to be more musically literate with information that can apply to any instrument.

“You can’t just work all your life, you need something else going on in your life and to express yourself creatively… and music is the perfect thing for that,” said Whitener.

Stanley highlighted Burbank High’s award-winning music program, with band, jazz, string and AP Music Theory classes. Students who get As in the theory class tend to score fours and fives on the AP test, he said.

The BHS string program is currently studying chamber music, Stanley said, adding that such a focus requires students learn to work together and work with people, skills that are applicable to the wider world and not just relegated to chamber music groups. 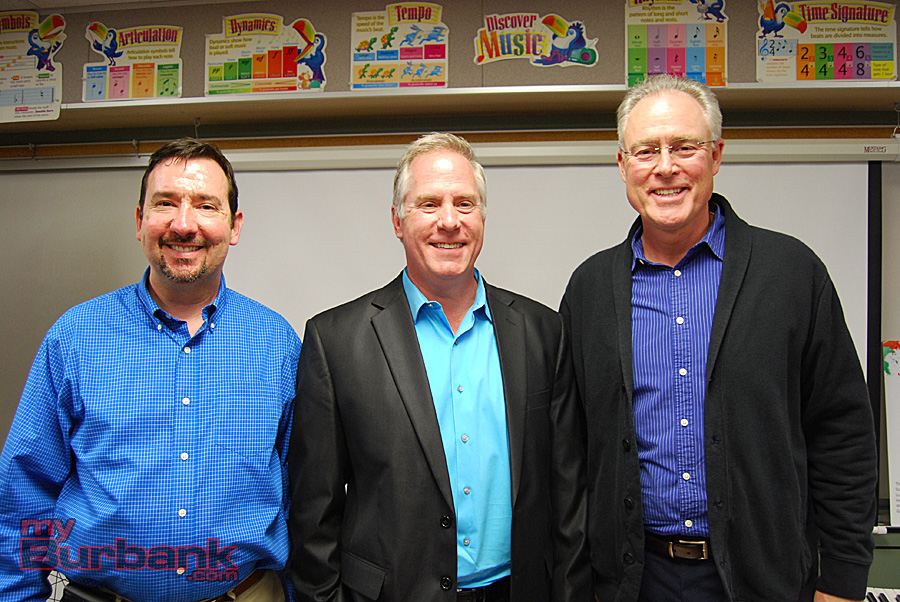 The addition of two music teachers to the elementary school rotation has been huge, acknowledged Hollis. Whereas in previous years he was seeing 2000 different students every other week, now he teaches the same 1000 students every week. He sees the children remember more from previous classes and are learning more.

Flynn encouraged parents and community members to speak with their principals and school music teachers about the creation of sustainable music programs at individual schools, answering parent concerns the lack of string music programs at Luther, Jordan and Burroughs. She mentioned the City of Burbank is discussing creating an all-city orchestra, as a possible option.

Ultimately, the hiring of more music teachers throughout the district is the best possible remedy for growing music education, Flynn said.

“There’s no substitute for having a music class taught by a professional music teacher,” she explained. 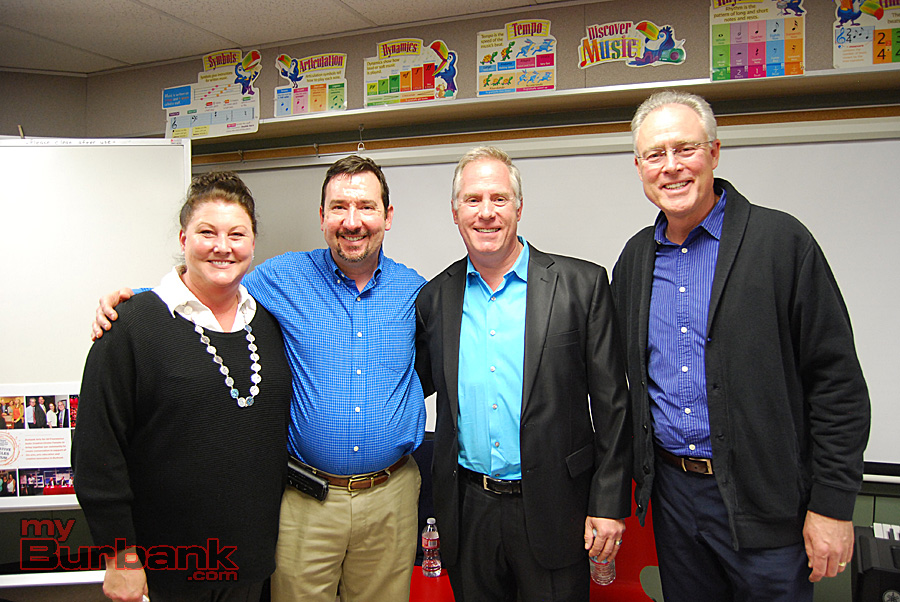 BAFA Community Outreach Co-Chair Suzanne Weerts opened the meeting, noting the attendance of four sitting Burbank Board of Education members: Dave Kemp, Ted Bunch, Charlene Tabet and Dr. Roberta Reynolds, who is also running to extend her term on the Board. Weerts also welcomed the attendance of additional candidates for the school board, including Steve Ferguson, Dr.  Armond Aghakhanian,  Vahe Hovanessian and Greg Sousa, along with Burbank City Council candidates Chris Rizzotti and Sharon Springer.

The BAFA Community Meeting was held in Roosevelt Elementary’s new music room, which was remodeled with a $10,000 grant from Ikea. Roosevelt’s music room is the only dedicated elementary music room in the district.