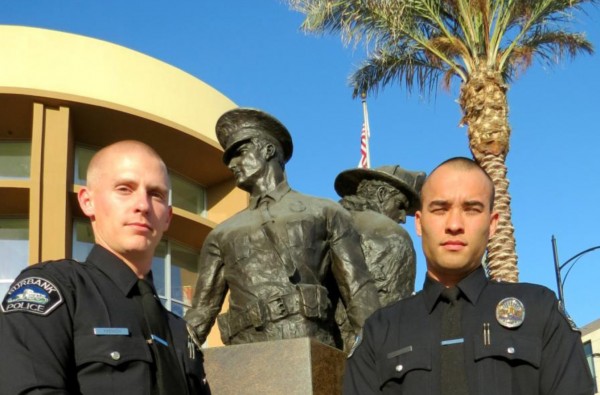 Officer Kristopher Totemwongs, elected as the Class President, delivered his very substantive President’s Address in a polished and professional manner. Additionally, he was awarded the Outstanding Officer Award, which is presented to the recruit who has distinguished himself by earning the highest number of points overall in the Academy. Through his constant demonstration of excellence, he surpassed the effort of his 68 classmates to earn this coveted award. Officer Totemwongs is from Burbank, he attended John Burroughs High School and California State University at Los Angeles. His prior employment was in private industry.

Our second graduate, Officer Paul French, graduated in the top 10% of the class and was designated as the Class Guidon Bearer. The Class Guidon Bearer is chosen by his fellow recruits as one who portrays the epitome of motivation, integrity, and leadership throughout the Academy. Officer French is from the local area, he attended Advantage Preparatory High School and College of the Canyons. He is a seven year veteran of the U.S. Army 82nd Airborne Division and served two tours of duty in Iraq.

Chief LaChasse recognized the graduate’s success by stating, “The high class standings are a tribute to their personal qualities, determination, and commitment to excellence. The results are an affirmation of the Department’s selection process and diligent work of the COP’s Bureau.” 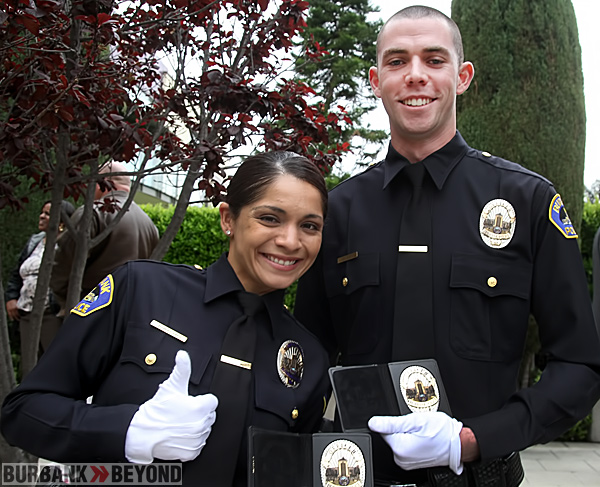 It's all thumbs up and smiles for new Burbank Police Officers Angela Burrows and Blaine Shifley following their graduation from the LA Sheriff's Academy. (Photo by Ross A. Benson)

Officers Burrows and Shifley were among 67 cadets in Los Angeles County Sheriff’s Department class number 386.  Graduation ceremonies were held   at the Cerritos Performing Arts Center.  Burbank’s Police Chief Scott LaChasse gave the keynote address.  LaChasse, with over 35 years of experience in law enforcement, was able to emphasize important lessons he has learned during his career, as well as pass along valuable tips to the graduates. 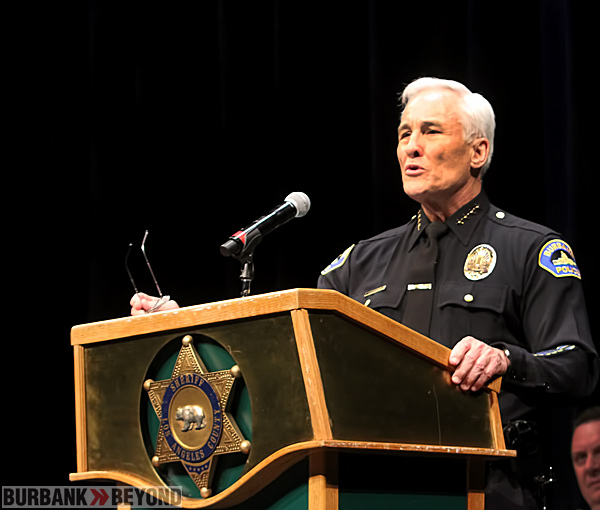 Burbank Police Chief Scott LaChasse was the keynote speaker at the graduation ceremony. (Photo by Ross A. Benson)

Ever since she could remember,  Burrows, 35, wanted to make a difference as a police officer. A graduate of John Burrough’s High School, she loves Burbank and is proud to join the police department as a new officer.

Prior to becoming an officer, she was a  dispatcher with the Glendale Police Department for approximately six years. She looks forward to interacting with the community that has always had a special place in her heart. Her goal is to be approachable with the citizens of Burbank and to focus on community policing, seeing friendly and familiar faces. Her positive outlook as a public servant and role model is sure to be an asset to the city.

Blaine Shifley, a graduate of Valencia High School and California State University, Northridge, likes the feel of a close-knit community. He resides in Santa Clarita but enjoys  Burbank.  That’s why he decided on a career with the Burbank Police Department. Being a police officer appealed to Shifley because he knew he would be able to help people and make a difference. He likes the challenge of an active, varied job. Being a police officer means every day will be a new and different experience, and he is looking forward to working in an environment that encourages strong teamwork. Shifley is excited about his diverse training and is proud to call himself a Burbank police officer. 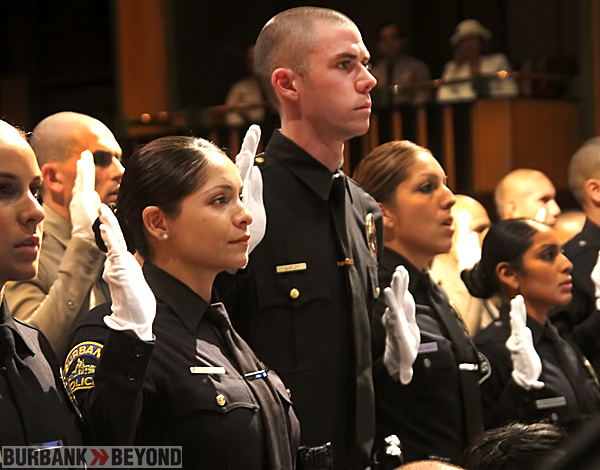 During their probation, the new officers will complete two weeks of in-depth safety and firearms training at the Burbank Police Range. They will then join a Field Training Officer on the streets for several months. 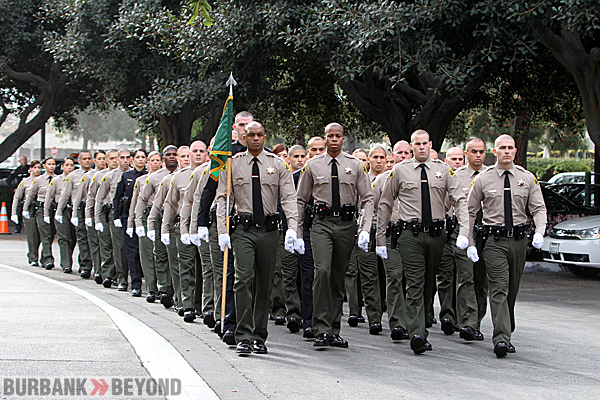