The Patrons Club paid tribute to Glendale Community College students with its theme “Future Stars of America” for the annual fashion show presented earlier this month at the Castaway Starlight Room.

The Patrons Club raises funds for the GCC Foundation, Inc., and money goes to scholarships and grants-in-aid presented each year to students who fulfill award requirements. Last year’s luncheon raised about $23,000. Funds raised help students complete their educational goals whether they plan to transfer to a four-year university or join the workforce. 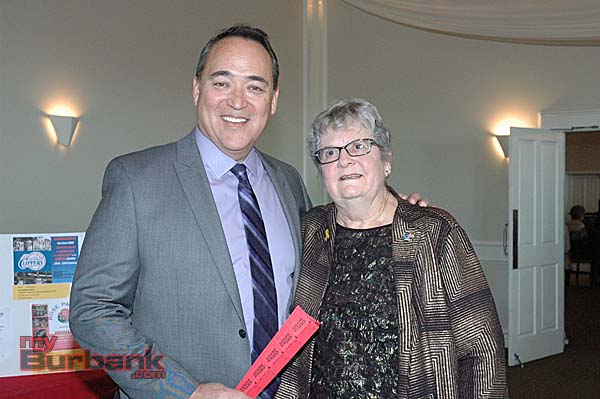 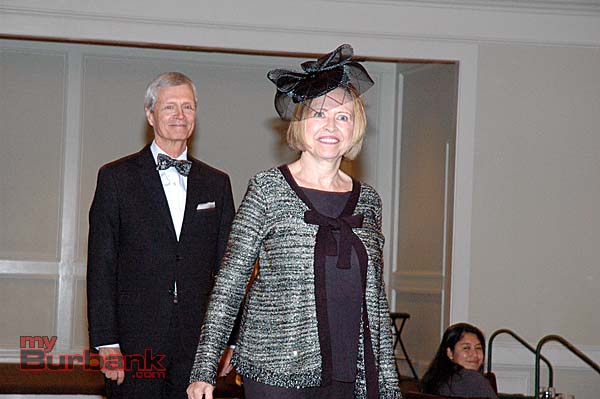 Brooks summed up her appreciation in six words.

“Patrons Club members you are awesome!” she said. 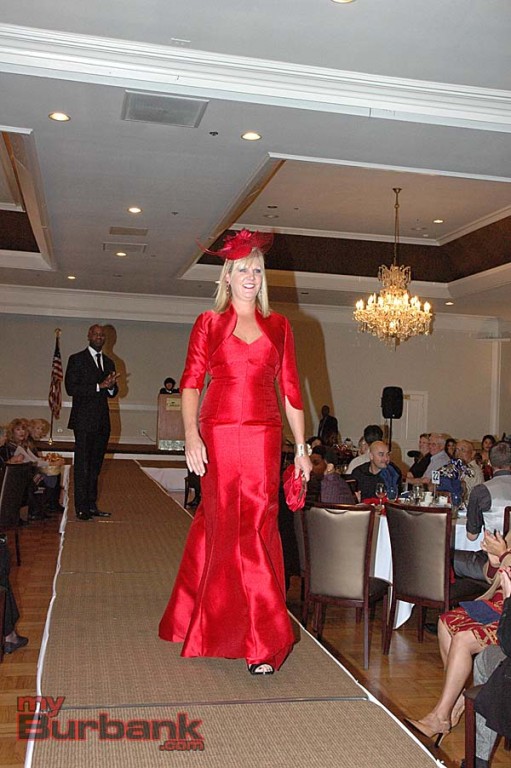 Erin Kurasz models a ruby evening gown from Holiday Hats and Gowns at the Patrons Club’s fashion show. She was escorted by Austin Kemie (in background). (Photos by Joyce Rudolph)

Longtime member Margaret Hammond made quite a fashion statement herself, donning a straw hat embellished with white silk rose that matched perfectly with a white crocheted sweater over a black blouse. She was in charge of the $1,000 cash drawing won by Marian Getts.

Me Mine, Doctors House Museum membership and History of Glendale Book opportunity prizes.

The La Crescenta Woman’s Club was well represented at a table led by President Carol Huntwork. Ellie Pipes was sitting with her sorority sister, Norma Johnson-Stodder, of Encino. 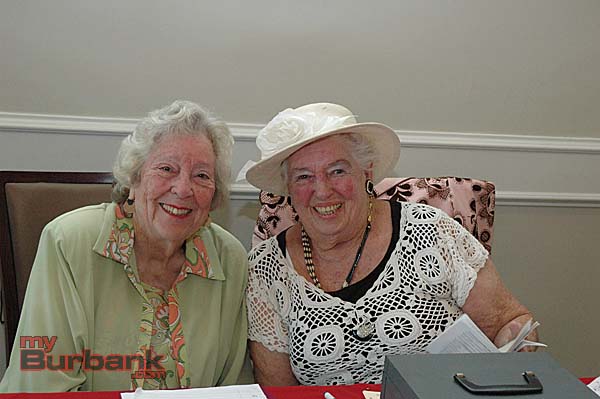 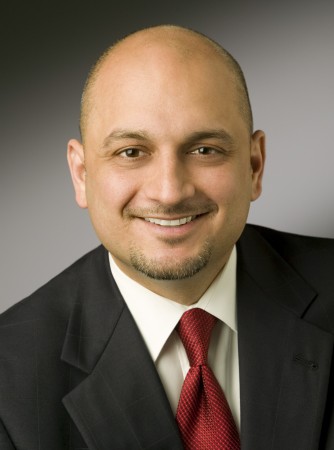 Mokhtari comes to NBC4 Southern California from KIRO-TV in Seattle. Since 2007, he served as news director and web manager, directing all news gathering operations, digital and social media strategies for the station. During his time there, he invigorated the social media team and deployed Facebook and Twitter tactics to increase followers, bringing the station to number one in social media engagement in the market. Under Mokhtari’s leadership, the station has enjoyed an upward trend in its ratings during the evening and mid-day newscasts.

In 2006, Mokhtari served as managing editor at NBC4 Southern California. In this role, he managed the day-to-day coverage and editorial direction of the news department.

“I am thrilled to welcome back Todd to the NBC4 team,” said Carlston. “Todd’s knowledge of the Southern California market, combined with his experience in producing high-quality content for broad audiences, will greatly contribute to our newscasts.”

“Returning to NBC4 Southern California at this time is a tremendous opportunity,” said Mokhtari. “The station is moving aggressively to differentiate itself through high-quality enterprise stories, and I am humbled to join NBC4’s highly respected news team in this role.”

From 2002 to 2006, he served as the assistant news director for the NBC owned and operated station, KNTV-San Jose. From 1997 to 2002, Mokhtari was the news director for the FOX affiliate in Seattle, KCPQ-TV. Known for his ability to navigate and motivate staff during transitions, he successfully led the KCPQ-TV news team to become more competitive in the marketplace.

Mokhtari began his career at NBC’s affiliate, KCRA-TV in Sacramento, CA. Starting as an intern, he quickly moved into a writer and producer position for the station’s morning newscast. Later, he produced the 5 p.m. and 6 p.m. newscasts, which were consistently top-rated and considered the most respected in the region.

Mokhtari is a graduate of University of California, Davis. He holds degrees in Political Science and Rhetoric and Communications. An avid golfer and local traveler, he is married and has a five-year-old son 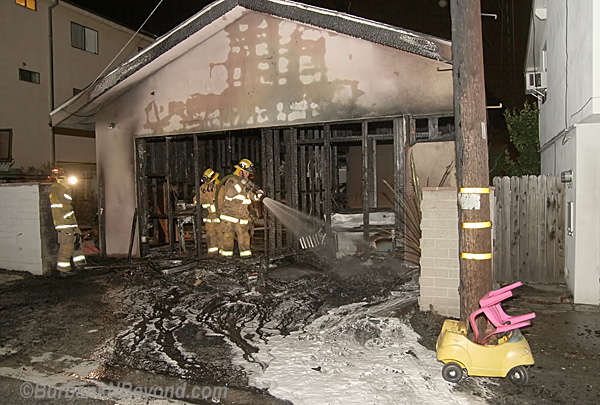 Burbank Fire responded to a garage fire on Alameda Avenue just east of Glenoaks.  Upon their arrival they discovered a garage to the rear of a single story house with fire showing. The next engine company in was Glendale’s Engine 27 and they supplied Burbank’s Engine 11 with a water supply as a truck company went to the roof to ventilate.  The fire threatened an exposure to the west but with quick action the garage fire was knocked down and held in place. The fire department used a Unified Response involving companies from Glendale Fire and Burbank Fire  and it worked seamlessly. The cause is still under investigation with the damage listed at $40.000 to the structure and the contents $10,000. There were no injuries to firefighters or civilians. The six engines and trucks of firefighters that responded were under the Direction of Battalion Chief Dave Schmitt. 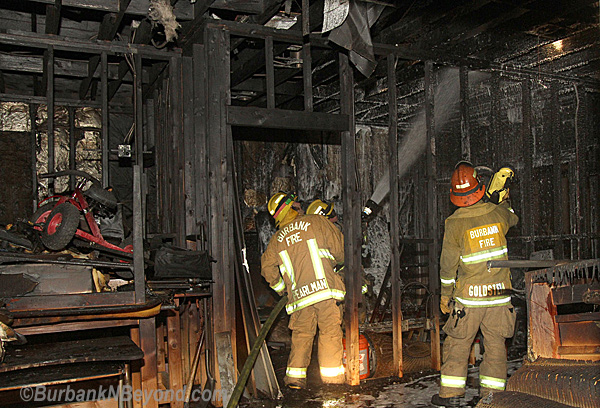 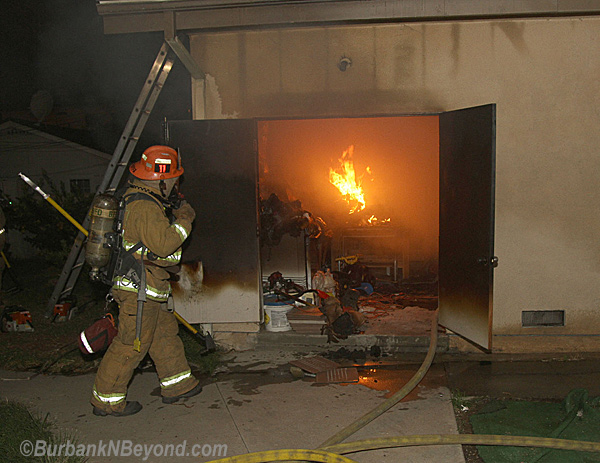 With Walmart announcing that they are coming to Burbank in the near future, we traveled to Larry’s Chile Dog in the heart of Burbank to talk to local residents and small business owners about the impact they believe the super store will have in Burbank. Hosted By BurbankNBeyond’s Deborah Dodge.

With Walmart announcing that they are coming to Burbank in the near future, we traveled to Larry’s Chile Dog in the heart of Burbank to talk to local residents and small business owners about the impact they believe the super store will have in Burbank. Hosted By BurbankNBeyond’s Deborah Dodge.