Fourth-graders in Andrea Terrell’s classroom at Bret Harte Elementary School dissected whole squid as part of their study in science.

In a group of three or four students per squid, the nine- and ten-year-olds started with a lab packet outlining questions they would need to answer, based on their observations.

Students measured the physical dimensions of the sea creature and described the texture, coloring, external and internal anatomy, explained Terrell. 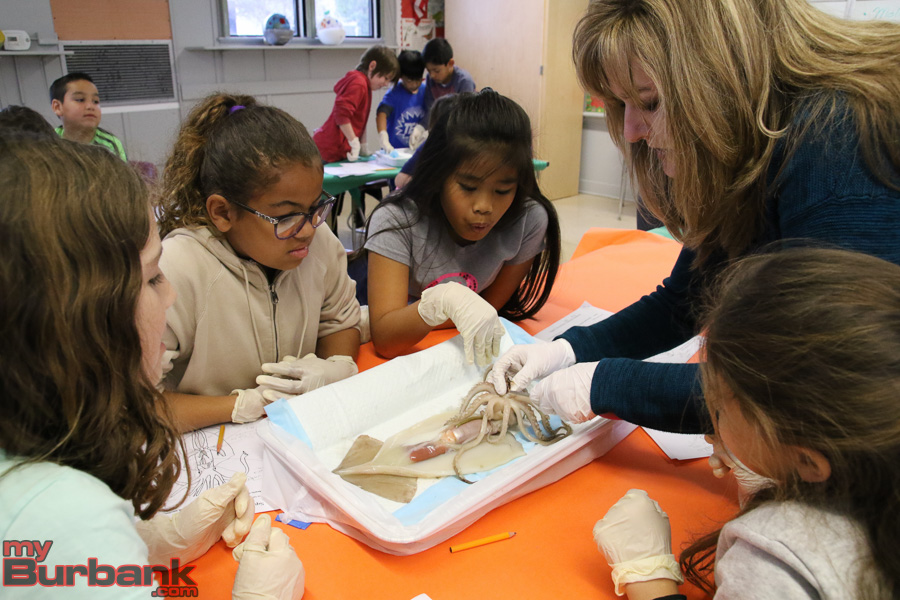 After Terrell went over the vocabulary related to the science project, she connected what the students have already learned in class to the squid anatomy and its functions.

Once Terrell cut open each squid, the students were able to match what they see on the table to the diagram of its internal anatomy. She asked students to point out certain physical structures of the squid and answer questions within their group.

“We talk about the history between squid and sailors, fun facts and how each internal structure serves a purpose in the survival of the squid,” added Terrell. Then, “we cut out the beak (mouth) of the squid, and take out the quill which is like the backbone of the squid.” 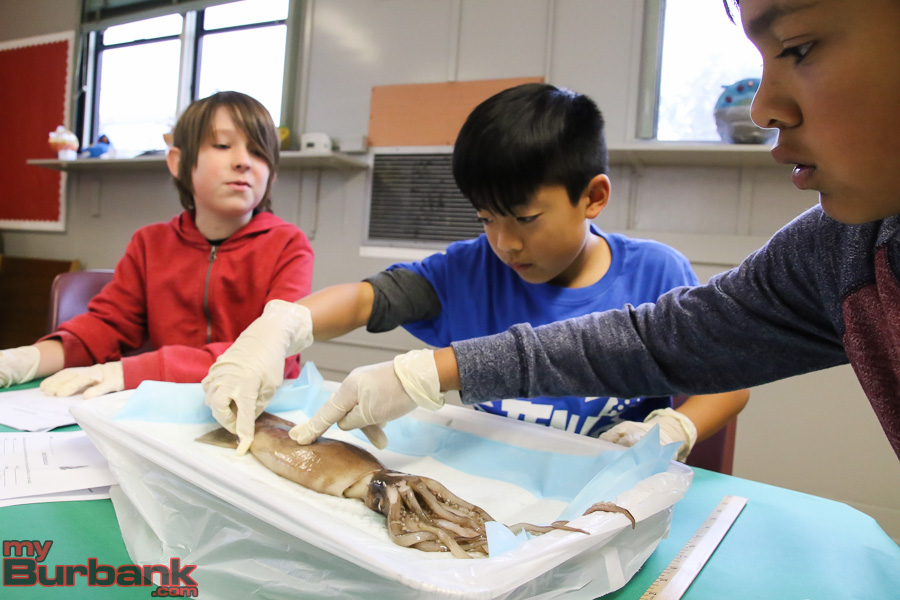 Students ended the lab by puncturing the ink sac and writing their name in squid ink on their paper using the quill and ink from the ink sac.

“With the Next Generation Science Standards, we have been learning about how plants and animals have internal and external structures that function to support survival, reproduction, behavior and growth within their environment,” said Terrell.

“We have read articles and done research about different  organisms and their ecosystems, including water ecosystems. I wanted the students to have a hands on experience and see for themselves what those internal and external structures look like and how they function.” 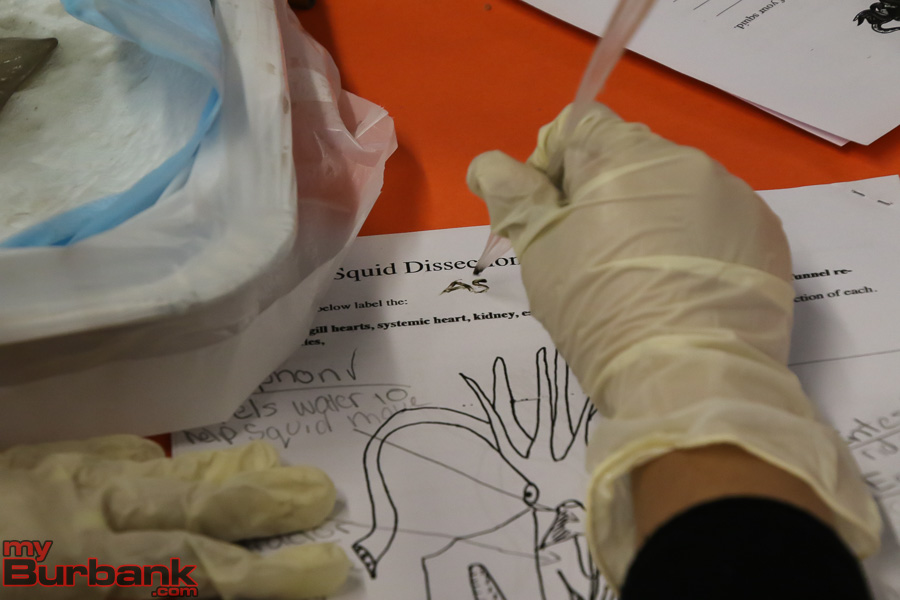 Several of the students commented on aspects of the squid dissection they liked or didn’t like and what they learned.

“I learned a lot from the dissection about how their body functions, such as how the chromatophores on the mantle of the squid help the squid camouflage and hide from predators,” said student Charley Barnett.

“Not many people in their life get to touch a squid,” added Kayla Kassin. “It’s so amazing that at such a young age I get to touch an animal that once lived in the ocean. But I didn’t like watching Ms. Terrell cup open the squid! That was the only part of the dissection that I didn’t like.” 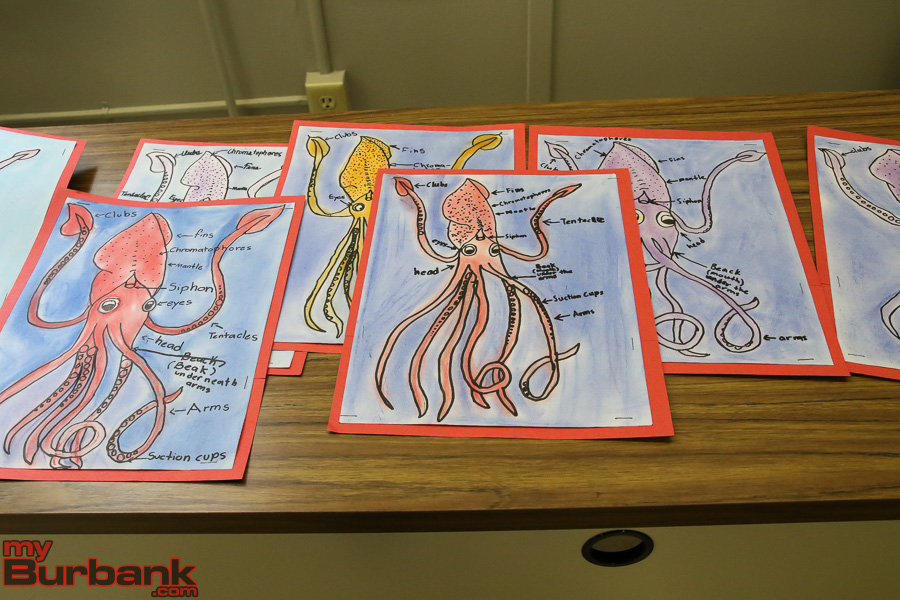 “I love that I was able to see all the organs, and learn what a squid needs to survive in its environment, they have many adaptations,” commented Willie Colvin-Marvin. “I would have liked to cut into the funnel retractor muscle, because it  looked like it would be full of interesting things to explore. I also enjoyed writing my name using the quill and ink from the ink sac.” 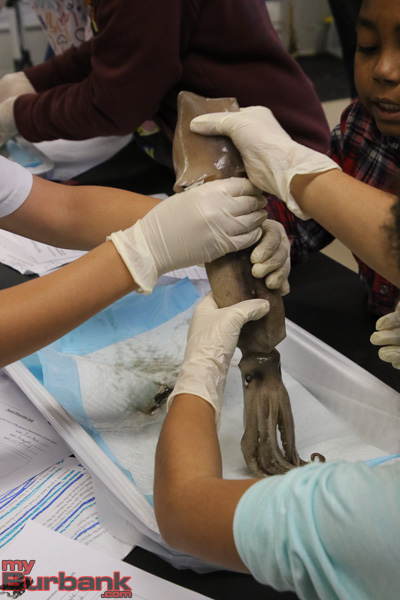 Jhanessa Equila said, “I liked that we were able to take a closer look at the body parts of a squid. This helped me to visualize what we were learning about it class.”

“I learned from the dissection that squid have many adaptations to survive,” she also said. “For example, they release ink to confuse their predators so they are able to escape.”

“I liked the fact that I got to see inside the body of a squid!” added Jeremiah Rivas.

“I now know what the ink sac looks like and I learned that a squid has three hearts, a systematic heart and two gill hearts and they don’t have the same functions.”

“You can only learn so much from a book,” Terrell continued. “I feel that a first-hand experience allows them to connect what they have read to the real world.”

“The squid dissection is the visual bridge that allows them to transfer their knowledge to something concrete. As a result, they will be able to think critically and provide evidence from their experience to formulate stronger opinions and communicate more efficiently about the subject because they have made a connection.”