Like its counterpart baseball, pitching is worth at least 75 percent in softball and if it’s true, then Burroughs High and Burbank are on solid footing in Presley Miraglia and Allie Benson.

How these two junior hurlers perform in the circle will dictate the Indians and Bulldogs overall success. 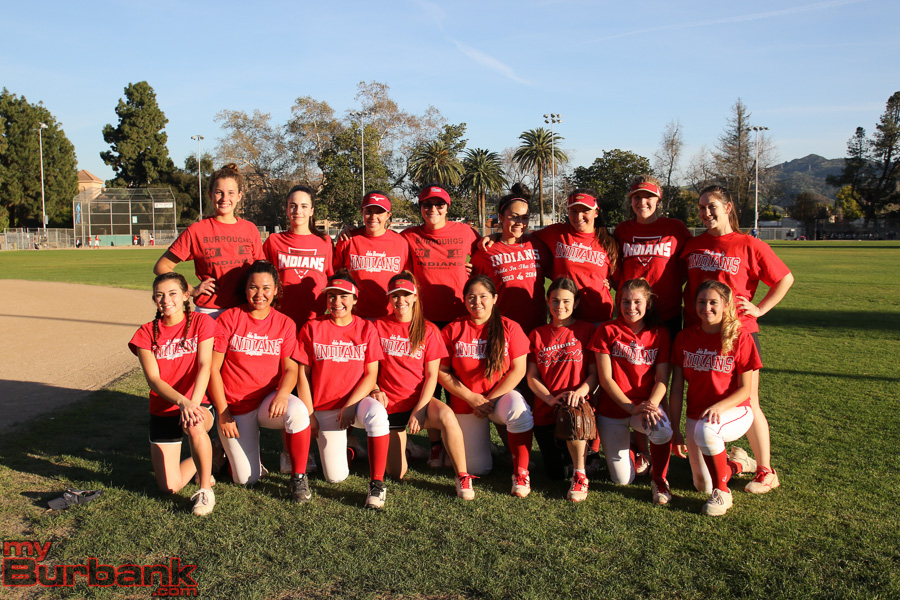 The Burroughs High softball team is ready for another run at the Pacific League banner. (Photo by Ross A. Benson)

This is especially true when it comes down to who will be dominant in the Pacific League.

There is one change and that is the departure of Burroughs coach Doug Nicol, who was highly successful.

The new man in charge of the Indians’ program is Wes Tanigawa, and his expectations are the same as Nicol’s.

“No one ever knows what you’re stepping into,” Tanigawa said of being the head man. “There’s a lot of work. But Doug has been there for me and that’s really helped me make the transition.” 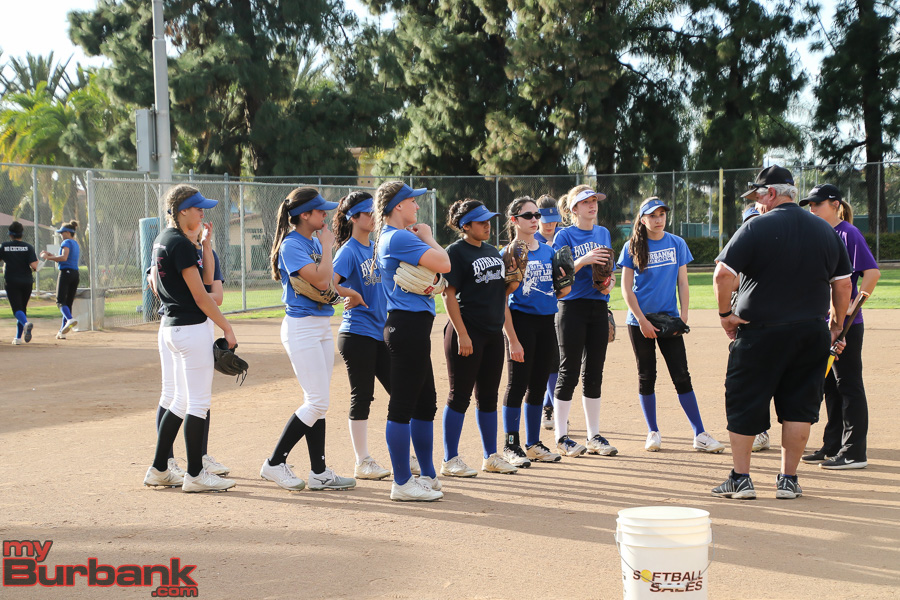 Tanigawa said he wants to put a good product on the field.

So far this season, the Indians are 4-1 and begin the league campaign on March 28 at Pasadena.

Burroughs will host archrival Burbank on April 19 and visit the Bulldogs on May 11.

In 2016, the Indians went undefeated in league action at 14-0, were 21-4 overall and advanced to the CIF Southern Section semifinals.

Miraglia, who posted an earned-run average of 1.41, was in the middle of this and the right-hander will be the focal point again.

“Presley was always willing to step up to the plate and give it her all,” Tanigawa said. “She’s been in the program now for three years and she works extra hard.” 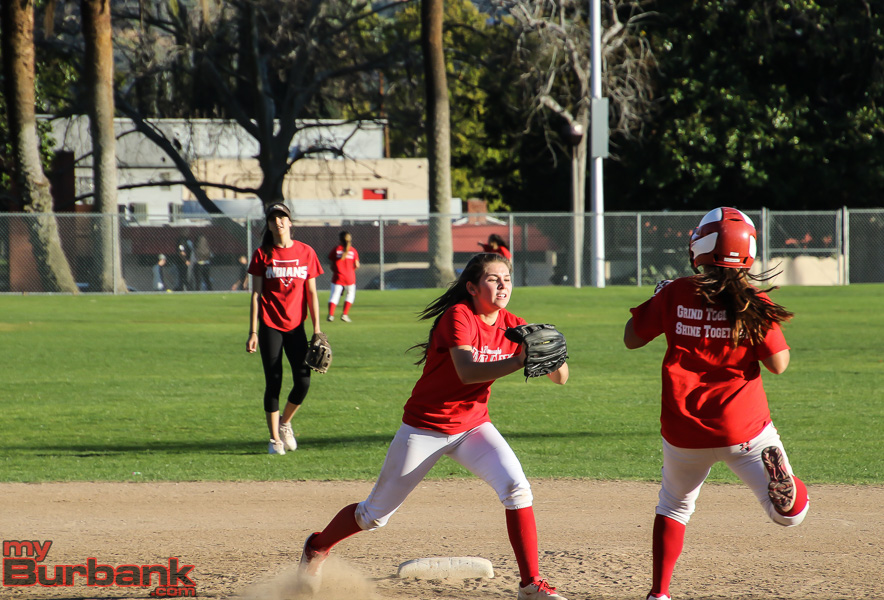 The Indians are working on their infield drills which are always critical to any success. (Photo by Ross A. Benson)

Tanigawa continued: “Presley is a very talented pitcher and knows that she has a lot on her shoulders.”

Miraglia is backed up by junior Mia Storer, who saw some time in the circle last season.

The Indians’ infield includes junior Amanda Flores at first base, junior Nikki Ricciardella at second base, senior Lauren Lopez at shortstop, senior Brianna Johnson at third base and the tandem of sophomore Megan Williams and junior Kaylee Vigil at catcher. 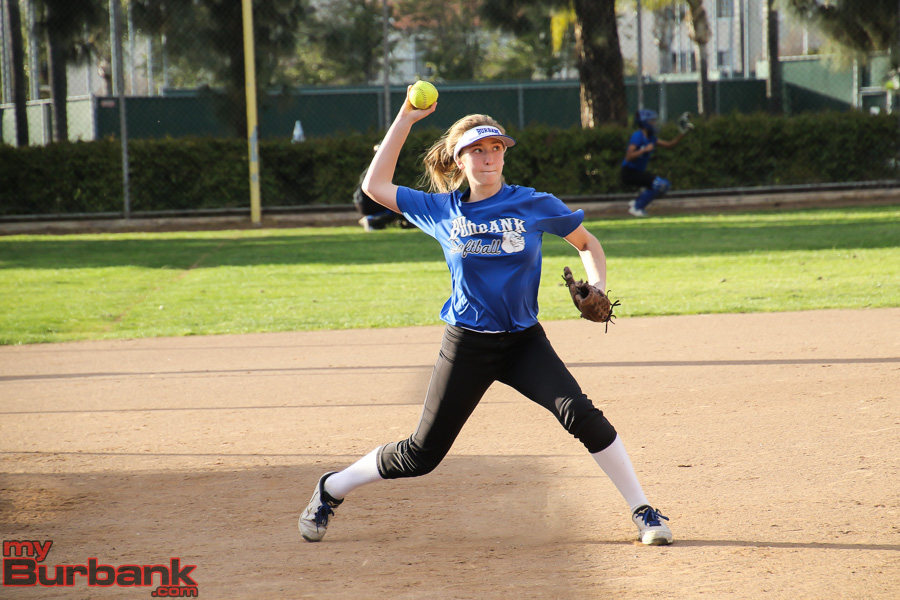 The Bulldogs are likewise also working on infield play. (Photo by Ross A. Benson)

Meanwhile, for Burbank, this season is an opportunity to redeem itself from the previous campaign in which it went 11-17 and 8-6 in league with an opening-round loss to Paramount in the playoffs. 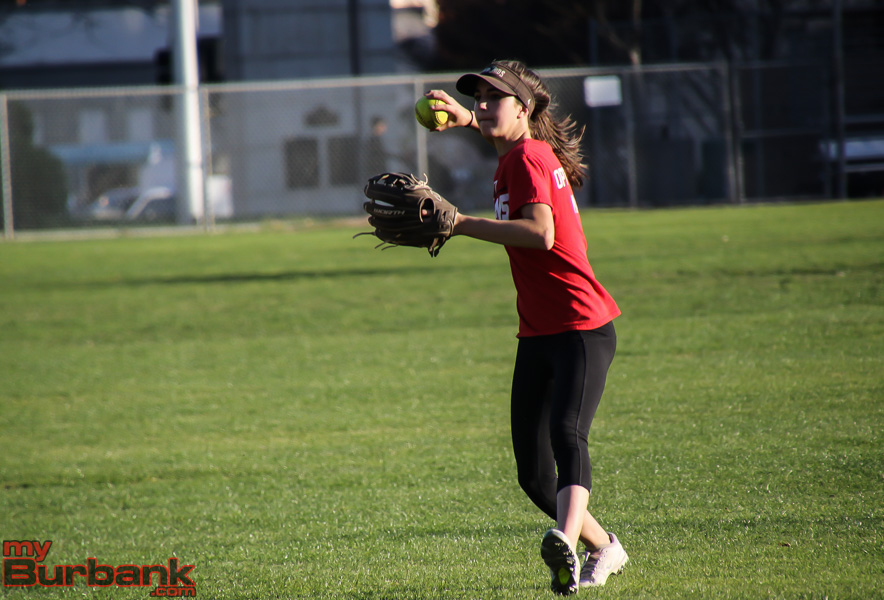 Outfield defense is often overlooked, but Burroughs makes sure everything is in order. (Photo by Ross A. Benson)

The Bulldogs commence league action on March 28 against visiting Glendale.

“Overall, we’re better than we were last year,” he said. “The hitting is stronger, one through nine. They have a plan at the plate. This is a more mature and experienced team.”

The league race is going to be a battle. “It’s competitive as always,” Delaney said. “Burroughs is always tough to beat and Crescenta Valley seems to play well under [Coach] Amanda Peek.”

Delaney said the team gets along, and that’s going to help. “I don’t mind being the underdog,” he said. “You play freer. They’re really close-knit with good chemistry.”

Much is expected of the right-handed Benson, who went 7-7 in 2016. Benson is going to be backed up by sophomore Alex Davis and freshman Savannah Davis.

“Allie is a lot more confident this season,” said Delaney of his ace. “She has a game-plan and she worked hard in the off-season. She’s made really good progress.” 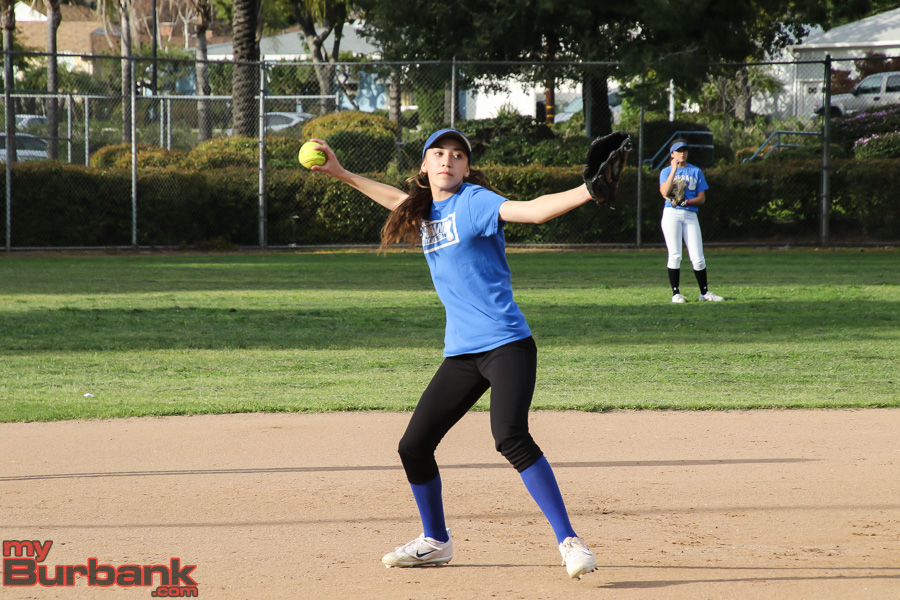 The old saying that practice makes perfect isn’t lost on the Bulldogs. (Photo by Ross A. Benson)

“Amaya can play all eight positions except pitcher,” Delaney noted of his young backstop.

Burbank’s infield consists of juniors Erin Lashkari and Melissa Daniel at first base, junior Macie Jensen at second base, freshman Katie Treadway at shortstop and junior Bene Snyder at third base.

“Melissa has good power and is good defensively,” Delaney said. “Macie, who batted .310, will fill in the power spots in the batting order [3-5], and I’m happy with her defense.”

Delaney added: “Katie is only a freshman and she learned a lot over the fall. She has great speed and range,” he said. “Bene understands her swing.”

The Bulldogs’ outfield will have Alex Davis in center field, junior Anysia Gonzalez in right field and sophomore Sarah Garelick in left field.

Delaney had glowing remarks about his outfield. “I’m happy with her game,” he said of Davis. “”She’s a good base runner and she’s going to have a breakout year.”

Delaney added: “There aren’t enough positive things you can say about Anysia,” he said. “She’s a really good defender and Sarah is very intelligent.”