Things won’t be much different than in the past when Burbank and Burroughs highs hook up at Memorial Field on Friday night for the 68th time in the storied history.

Of course citywide bragging rights are at stake. But that is not the only thing on the line in the Pacific League finale. A berth in the CIF Southern Section playoffs could be reward for the victor.

Burbank (6-3, 5-1 in league), which is ranked No. 10 in the CIF Southern Section Division 8 poll, can pretty much lock down a playoff spot with a win. 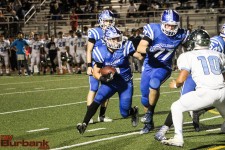 Burroughs (4-5, 3-3 in league) faces a tougher task as it will have to make the playoffs as an at-large team, since it will not finish among the top three teams in league. It did receive votes for the Division 8 poll, however, offering a glimpse of hope that it could sneak in with a win.

“The goal of our staff is to keep things as normal as possible throughout the week,” Burbank coach Richard Broussard said. “We don’t shy away from the magnitude of the rivalry or playoff implications.  We know the players think about it, so we talk about the rivalry, playoffs and what it all means to them.  With that information we try to get on the same page and typically, come out with the same objective as every week, win!”

For Burroughs to win again, the Indians will have come up with a game plan quite unique. 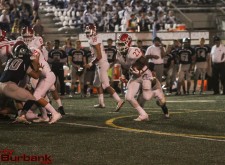 The Indians will be without five starters. Quarterback Hayden Zepeda is out with a Grade 2 tear of the medial collateral ligament in his right knee.

Burroughs moved up sophomore Nathan Piper to the varsity last week to take over for Zepeda. Senior Gabriel Pellot could also see time at quarterback.

“We’ve had some definite impact players that have gone down to injury. We’re trying to get the soldiers, the warriors, the competitors out there,” Burroughs coach Mike Reily said.

Reily said he isn’t sure what to make of the fact that his team received votes in the CIF poll.

“I haven’t figured that formula out,” Reily said.  “That’s great to see, but honestly I don’t know what it means. We’re focused on Friday night and trying to put together a great game plan and beat Burbank.”

Running back Chance Bell, who is committed to San Diego State, was in street clothes Tuesday as he said he is nursing some minor injuries.

“I’m going to be ready to go on Friday,” Bell said.

Bell said he is confident.

“Our coaches always come up with a good game plan,” Bell said. “It is whether we execute it or not.” 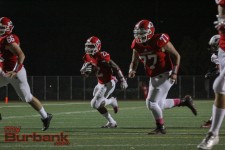 Burbank is a veteran team and comes in healthy with no players expected to miss the game due to injury.

The Bulldogs are also eager to get back to their winning ways after losing to Crescenta Valley last week, following a five-game winning streak.

“Though I am disappointed in the fact that we did not reach our first season goal (win a league title), we have done a number of things that has made our staff very proud,” Broussard said. “Our defense has carried us this year forcing over 30 turnovers in nine games.  This has created great opportunities for our offense this season.  Our punt and punt block teams have also been bright spots as well, allowing us to control field position and create scoring opportunities.” 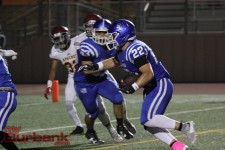 Burbank is led by senior quarterback Guy Gibbs, who has been the starter since the end of his sophomore year.

Senior Nick Warren and junior Darnell Williams have been the go-to running backs.

Seniors Forrest Fajardo and Joey Miller have been the top passing targets.

The defense is led by seniors Andy Reyes and Jake Kelley. Known for his punting and home run hitting skills, Danny Porras has also been a tough force as a defensive lineman.