If you live in Burbank and want to play youth tackle football, you very likely played for the Burbank Vikings.

On Friday evening at Memorial Field when Burbank High faced its longtime city rival Burroughs for the 71st time, several former Vikings players and coaches gathered for the 50th anniversary of the program.

During the half-century, the Vikings have taught the importance of discipline, hard work and practice and also some life lessons. 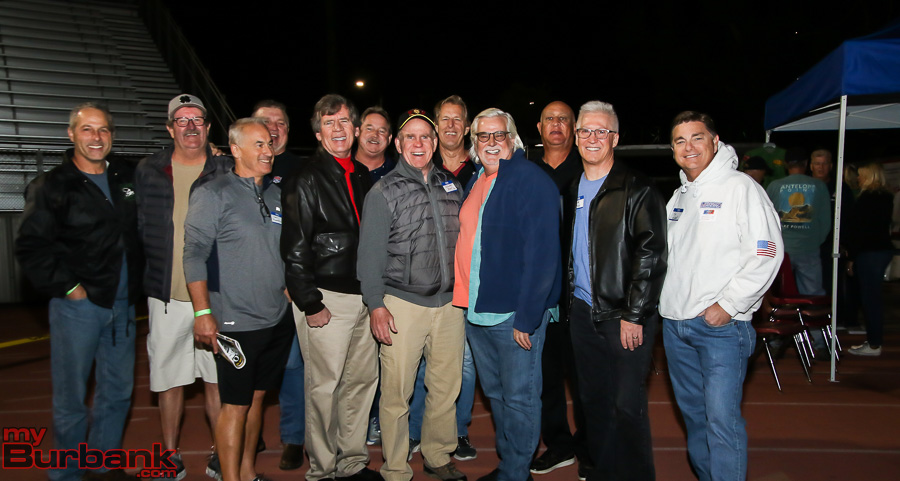 Many who were there played high school football for the Bulldogs or Indians, some at the college level and a few in the NFL like Randy Simmrin and Mike McDonald.

“When I started playing with the Burbank Vikings, I was just a little kid and I had no idea what talent I had. I just went out there to play and have fun and be with everybody else,” Simmrin said. “What happened with me and the Burbank Vikings was a transition period in my life. I learned that I had some talent and could play the game. I was brought in to play with a group of guys that were very dedicated and we had coaches like Steve Armstrong, Bob Bryant and some others that really were disciplinarians. It set the tone for me through high school.”

Simmrin, who starred at wide receiver for Burroughs and later USC where he played from 1974 through 1977 and caught 100 passes for 2,015 yards with 11 touchdowns, was asked about his feelings playing for the Vikings.

“I’m kind of an emotional person,” he said. “When I see these guys, I get a little bit emotional. I remember how we were and all the work we did together. I know that some of us aren’t here anymore and I get emotional.”

Simmrin, who was on the Trojans’ 1974 national champion team under the legendary Coach John McKay and now owns a small affordable housing development company in Carlsbad, said his best times were playing youth football in Burbank.

“I played a lot of football through the years,” said Simmrin, who grabbed 72 passes for 1,330 yards and 17 touchdowns during 1972 and 1973 for the Indians. “I got to play a little professional football in the NFL and I played in Canada. The purest form of football is Pop Warner youth level. I can’t say that I enjoyed football any more on any level than that 1970 year with the Burbank Vikings. That’s probably the best year of football I’ve ever had. When I was at USC, we were national champions and I was really proud to be with that group of guys. But the Burbank Vikings, we were little kids. Way more special.”

Tom McDonald played for the Burbank Vikings beginning in 1971 and later for the Indians. “It meant a lot to me and it stills means a lot to me,” he said. “These men here [former coaches] taught us how to play football and taught us to be men.” 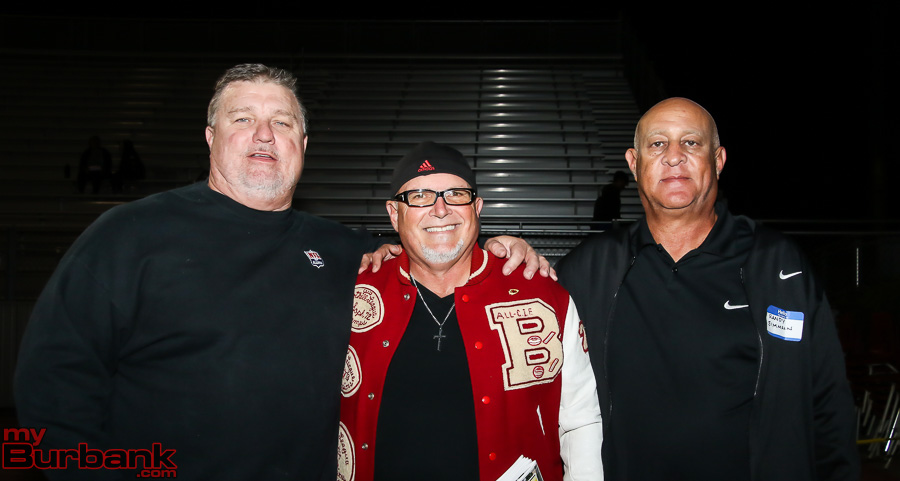 McDonald, who worked for Farmer’s Insurance for 37 years and had his wife and three sons also part of the Vikings, added: “I coached 27 years with the Vikings,” he said. “I have been vice president and president. It’s everything. It’s turned our football teams, our two high school teams, Burbank and Burroughs, into powerhouses.”

McDonald went on: “The lessons you learn playing Pop Warner football are life-long lessons,” he said. “They teach you everything. How to work together as a team. How to overcome, adapt, improvise. It teaches you everything about life. The men that were teaching us were incredible people. The closest friends I have to this day are the ones I met playing Burbank Vikings.”

Mike McDonald, who played football at Burroughs, USC, and the Rams, also has fond memories of his time with the Vikings.

“Like all sports, the Vikings teaches you discipline and the discipline that you take with you from there, if you listen to your coaches and do what they tell you to do like working out and staying in shape, you have a chance to progress,” said McDonald, who played linebacker and long snapper. “They gave me the opportunity and taught me to play football. Not just football, but about life.”

Nolan Day, an architectural consultant in Chicago, was also a Burbank Viking and the memories are good. 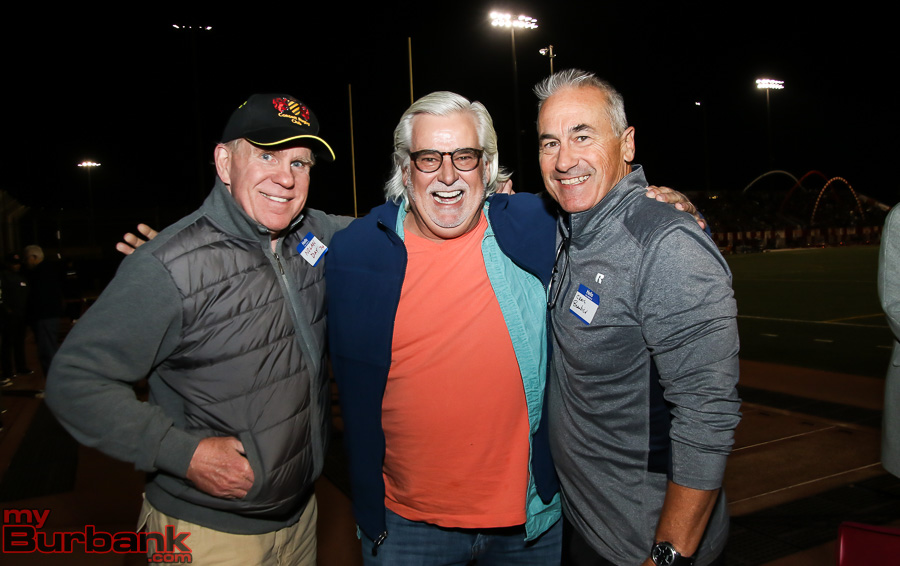 “The ’69 and ’70 teams were the first two years of the Vikings,” he said. “Several of us ended up coming to Burroughs and several went to Burbank. In the next 10 years, we won more champions in those 10 years than the two high schools combined in the previous 30. It was because of getting that early coaching.”

Day, who played football for the Indians, said the early coaching was the key.

“I would say that we were very fortunate getting the coaching that we did,” he pointed out. “They knew us. They knew the talent and how to motivate us and that was the formula that ended up being what made us do well those first two years.”

Day, who toiled at Cal State Northridge and San Jose State and had a tryout with the Dallas Cowboys and also played professional rugby in Australia, went on: “One of the things the coaches emphasized, is that it was a game of camaraderie and brotherhood,” he said. “We were really tight. Some of us had good college careers. There wasn’t much better team chemistry.” 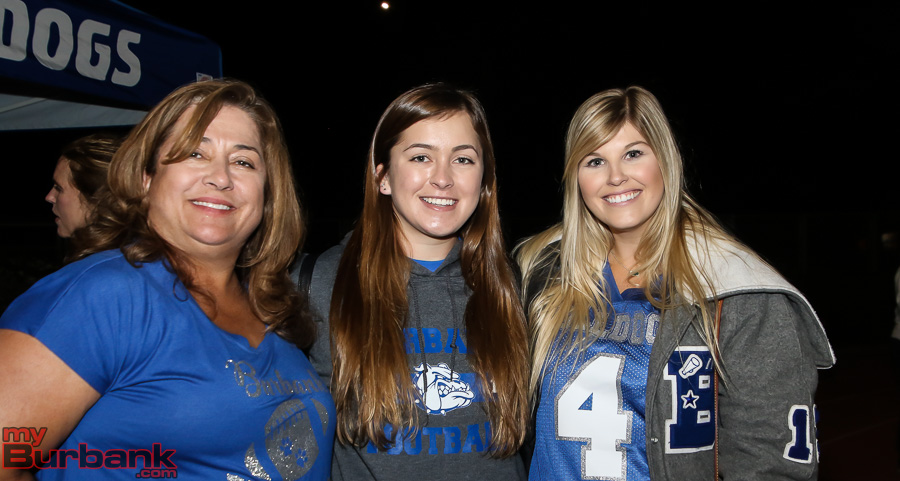 The girls are not left out as many were cheerleaders for the Burbank Vikings, including some who became cheerleaders in high school.

“A lot of the cheerleaders out here came through our program,” said Burbank school member Charlene Tabet, referring to Burbank and Burroughs. “We have a cheer team at six levels.”