The last week of August is proved to be a hot one, with temperatures reaching into the triple digits. Many of Burbank’s residents are feeling the heat throughout the day, as evidenced by an relatively empty town center in the afternoon. 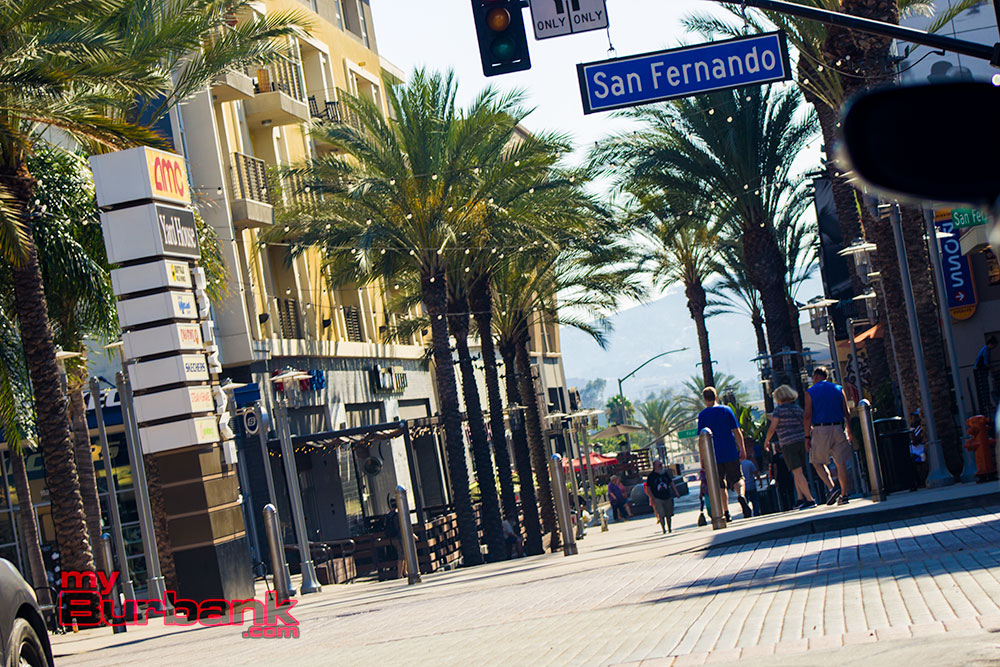 With the temperature hike, it’s important to know key information to ensure you and your pets stay healthy.

Cooling centers are available around Burbank for anyone stuck in the heat. The most popular place to escape the heat is the Burbank Town Center. While it is undergoing a makeover, there is an open and operating food court located at the bottom floor of the mall. If you’re looking for a longer term solution, AMC 8, also located in the mall, now serves as a dine-in theater.

You can also visit Burbank’s official cooling centers located at each of the city’s libraries:

It's hot out there! The Burbank Libraries are cooling centers, stop in to beat the heat. pic.twitter.com/Hb0BRVFTy2

Keep in mind that these libraries MAY have extended hours. To find out more information regarding extended hours, please call your nearest library.

According to the Red Cross, here are some useful tips when going through a heat wave:

You can find more information about heat-related illnesses on their website.

Bookworms in the northwestern area of the city were a lot happier on Saturday. After 11 months of renovations, the Northwest Library reopened its doors with a ribbon-cutting ceremony that drew more than 50 people including City Council members and the public. 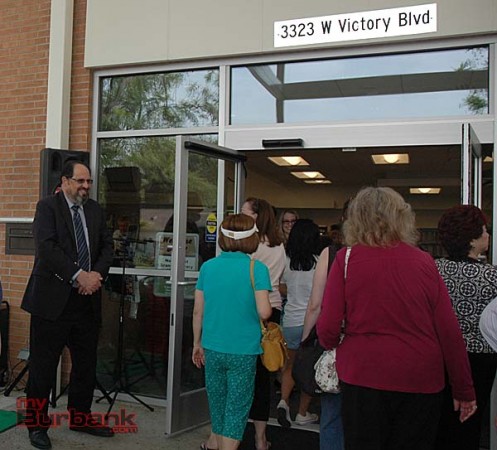 Vice Mayor David Gordon welcomes the public to the renovated Northwest Library on Saturday during the ribbon-cutting celebration. ( Photo By Joyce Rudolph)

There were several upgrades made to comply with the Americans with Disabilities Act, like handicapped access to the restrooms and better layouts of the floor plan and shelving. Some of the safety upgrades are new fire sprinkler and smoke detector systems with monitoring to alert the fire department.

Sustainability upgrades include a new roof that lessens heat absorption and carpet tiles made from recycled materials. The lighting was updated and new air conditioning installed.

“We wanted to make it safe, give it a better work flow and modernize it, and as you can see we’ve accomplished that,” he said. 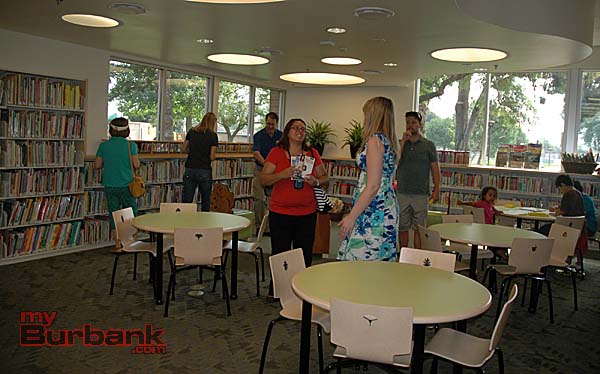 While it was painful having the library closed for almost a year, Library Services Director Sharon Cohen said the wait was worth it.

“It’s a well used library,” she said “A lot of people in the neighborhood walk to the library, children come to library after school, senior adults use it and people on their way to the airport stop by to get books.”

What Mayor Emily Gabel-Luddy liked was how the large windows brought in more sunlight and the view of the park. 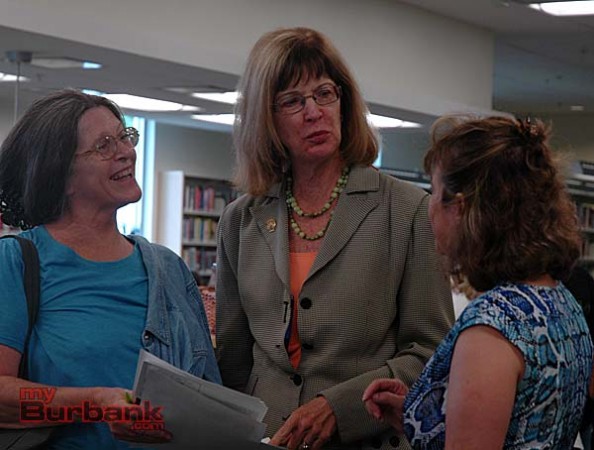 “It’s just like being in a garden,” she said. “When you look out of each window you see our park, the children’s play area, the trees and yet is is absolutely quiet so it’s like being in your own garden house, immersed in books of your choice.”

Libraries are the civic foundation of our community, Gabel-Luddy added. They are free, they promote democratic principles of access and they are available to the least fortunate in our community.

“The library now offers adults and children free access to computers, a teens’ corner where they can be quiet and chill out and a kids reading area promoting all that learning necessary for a promising civic future for the city of Burbank,” she said.

Regular library users said they were excited the library will resume hours on Monday and impressed with the upgrades. 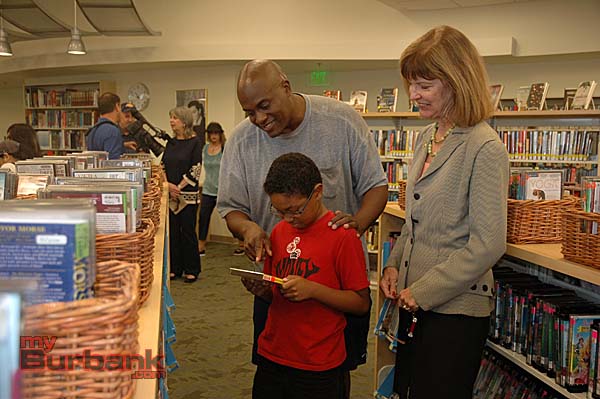 John Stewart and his son, Jaden, check out a DVD while talking to Mayor Emily Gabel-Luddy about the renovation of Northwest Library (Photo By Joyce Rudolph)

Jessica Darwich’s son Mohammad wanted to spend his 10th birthday at Northwest Library where he got his first library card.

The family missed the library during renovation, Darwich said, so they went to the other libraries for the summer reading program and checked out materials for three or four weeks at a time.

“We were sad Northwest Library was closed for so long and when we found out there was a ribbon cutting especially on his birthday we had to come and commemorate that,” she said. 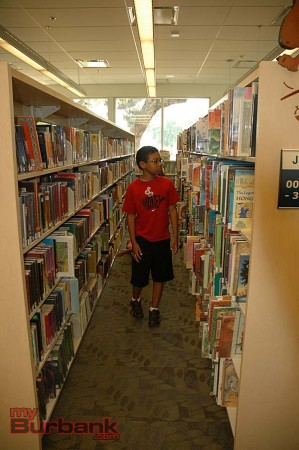 Jaden Stewart, 9, strolls through the children’s section of Northwest Library on Saturday (Photo By Joyce Rudolph)

He attended the ceremony with his dad John Stewart, who said they stop two or three times a week at either Northwest or Buena Vista Library. The changes they saw were great lighting, modern fixtures and a better flow going to different sections.

“This is beautiful! A good job!” John Stewart said.

The City of Burbank will be temporarily closing the Northwest Branch Library for a mandatory seismic retrofit starting on Wednesday, August 1, 2012.

The building at 3323 N. Victory Blvd. will undergo a number of improvements to make it both ADA
(American with Disabilities Act) compliant and earthquake-safe. The project is expected to be completed by Spring, 2013.

Any material checked out from the Northwest Branch that hasn’t been returned by July 31, may be
returned to either the Central or Buena Vista Libraries.

For further information, call 818-238-5600 or visit the library’s website at www.BurbankLibrary.com.

Recently, two middle school students were found to be in possession of marijuana at school.  Officers were able to obtain information from the students that they had purchased the marijuana from a man near the Northwest Library, located at 3323 W. Victory Blvd.

Members of the Vice/Narcotics Unit initiated an investigation and surveillance in the area of the Northwest Library which is in Foy Park.  Officers were able to identify the man selling marijuana. The investigation also led to a group of young people using marijuana at Izay Park, in the northwest corner of the parking lot near Clark Ave. and Griffith Park Dr.

On May 16, near the Northwest Branch Library, officers observed the suspect providing and selling marijuana to minors and adults.  They arrested Andrew Richardson, 19, of Burbank.  Richardson was booked into the Burbank Jail for possession of marijuana for sale.  His bail was set at $20,000.