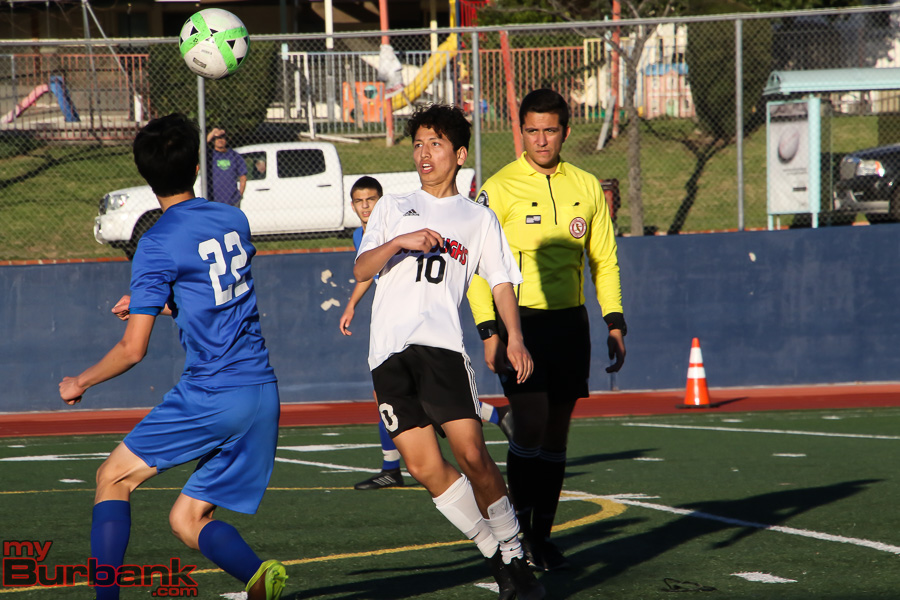 Burroughs’ Esteban Alcantar (#10) and Burbank’s Jae Lee fight for the ball. The Indians won 4-0. (Photo by Ross A. Benson) 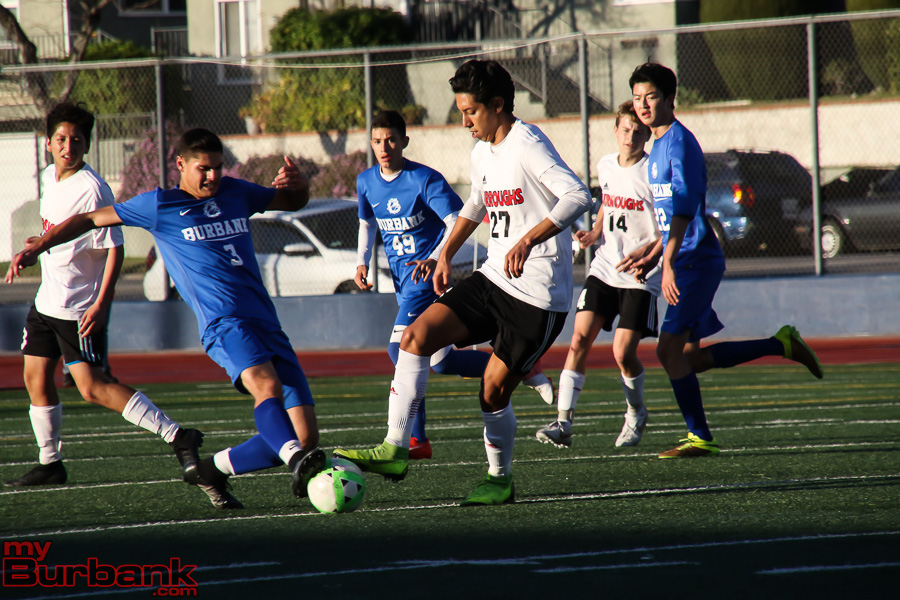 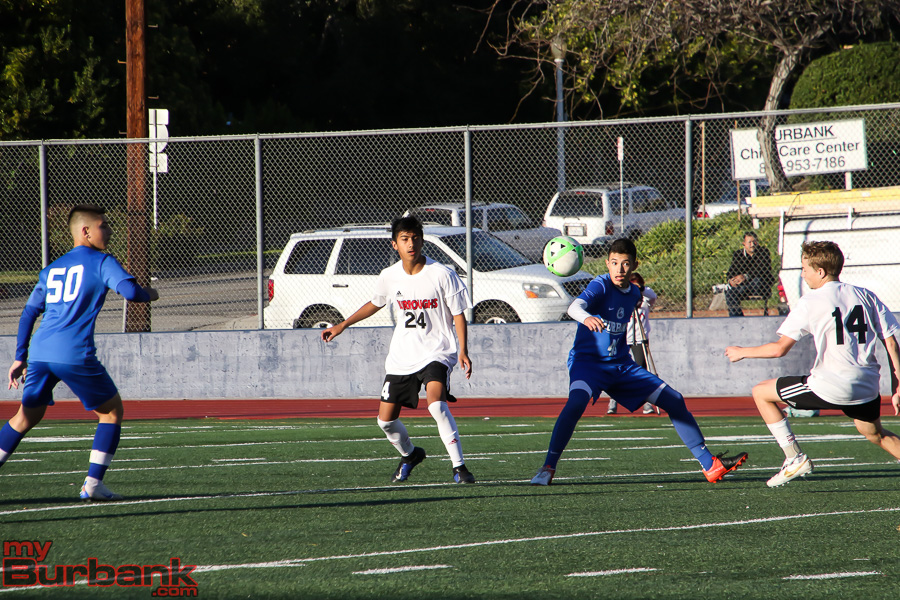 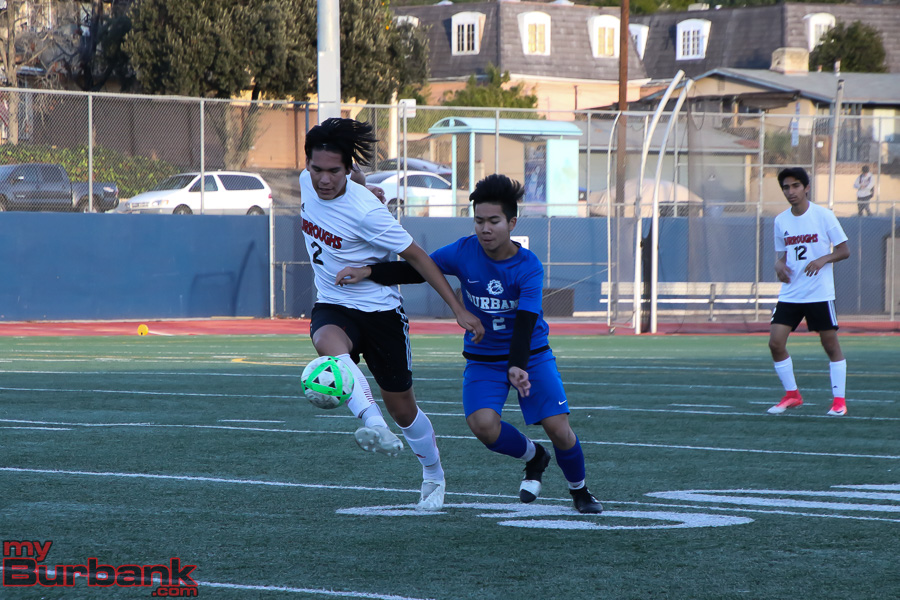 Controlling the action from the moment the referee dropped the ball for play, the Burroughs High boys’ soccer team completely dominated the action.

The Indians scored two goals in each half that catapulted them past visiting Burbank 4-1 in a Pacific League match on Friday afternoon.

In the 35th minute, sophomore forward Manny Gonzalez drilled home a 25-yard winner that extended the lead to 2-0. 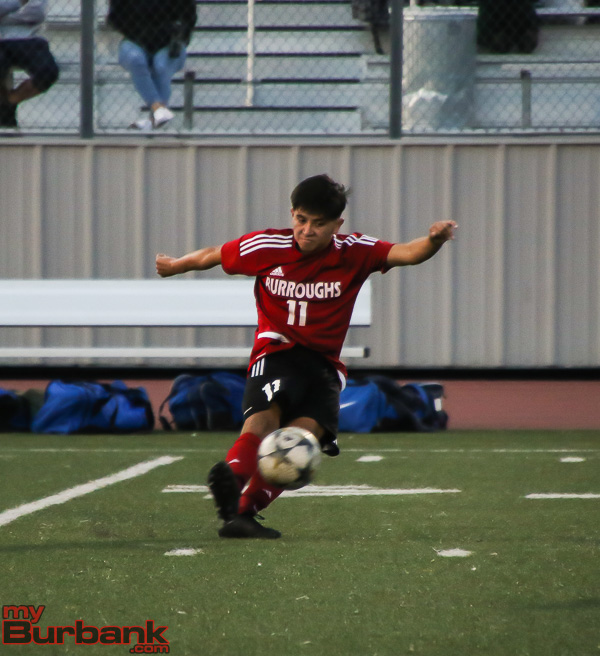 “I think we got our energy from our defense,” Gonzalez said. “I give all the credit to our defense. They hold it down all night. I feel like it came down to who wanted it more.”

A tally from 25 yards in the 41st minute by sophomore forward Elias Galaviz pushed Burroughs’ lead to 3-0 and Gonzalez’s 15-yarder in the 69th minute capped the Indians’ scoring that made it 4-0.

“We played well. We knew that we had to be patient. The guys moved the ball very well and we just needed to keep our composure and needed to limit Burbank’s opportunities,” Burroughs coach Michael Kodama said.

It took a while, but the Bulldogs (4-5-1 and 3-4-1 in league) finally scratched the scoreboard when senior midfielder Andy Cardenas, who is the kicker on the football team, dropped in a 10-yard header in extra time that trimmed the lead to three goals.

“We got outplayed the whole day,” Burbank coach Loi Phan said. “It was like a scrimmage. Bottom line is we got beat from the beginning to the end. They’re much better than us. We’ll regroup. We’ll play them again.”

Gerlach’s 20-yarder in the 44th minute came so very close, caroming off the right goal post.

“We’re getting better and better all the time,” Kodama said of his talented squad. “We’re happy with it.”

In the second minute, Gonzalez’s 25-yarder sailed wide left and three minutes later Gonzalez’s attempt was picked up by the goalie. 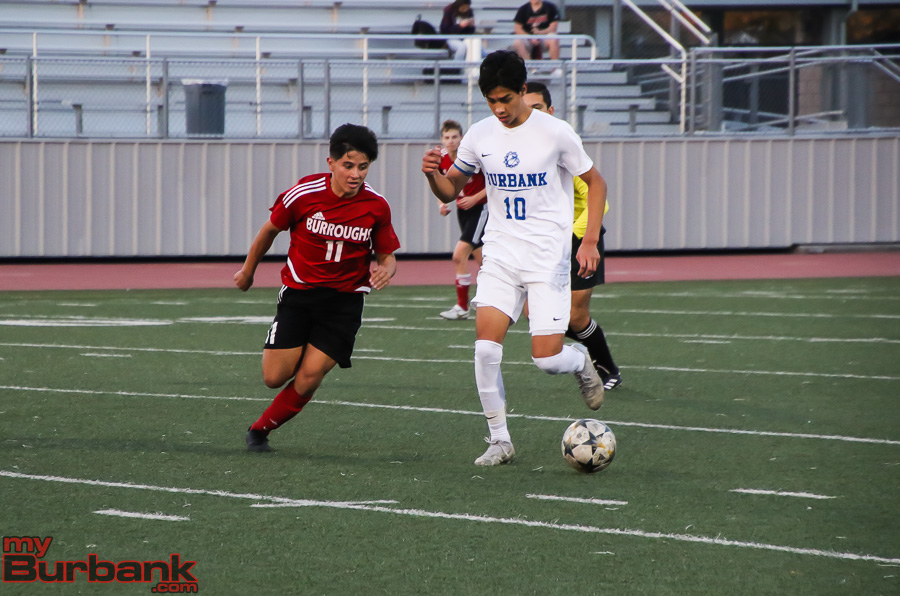 Andy Cardenas had the only goal for the Bulldogs, a header in extra time. (Photo by Ross A. Benson)

In the 12th minute, Hawksworth’s shot was blocked.

Senior forward Matthew Cardenas delivered a 10-yarder in the 16th minute and was followed by Hawksworth’s 30-yarder a minute later that drifted wide right.

Gonzalez had consecutive shots stuffed in the 22nd and 24th minute. Junior midfielder Juan Carlos Rosales’ 20-yarder in the 25th minute missed the mark and in the 26th and 31st minute, Cardenas delivered two 35-yarders that were not successful. 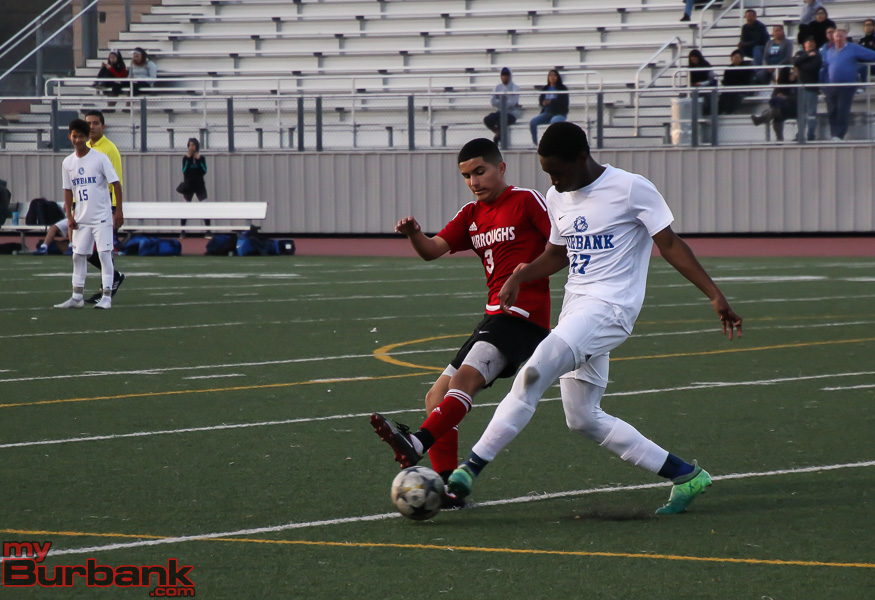 Manny Gonzalez scored two goals for the Indians and is being defended by Burbank’s Kaiyne Nzenwa. (Photo by Ross A. Benson)

Diaz’s 43-yard free kick in the 36th minute failed and Alcantar had his attempt blocked in the 38th minute.

Gonzalez’s 20-yard header in the 46th minute was off target, and Alcantar’s 25-yarder a minute later drifted wide right.

Alcantar’s 15-yarder in 52nd minute missed the goal, Alcantar’s 25-yard free kick in the 53rd minute was also off and Hawksworth’s rebound didn’t find the back of the net.

Cardenas had a 25-yarder in the 58th minute and Gerlach’s shot was blocked two minutes later.

Cardenas’ 25-yarder in the 60th minute was way too high and a 20-yarder by Galaviz in the 67th minute failed.

It isn’t easy to have consistent success. The Burroughs High boys’ soccer team has been relatively strong for quite some time. Last season, a very young team finished second in league. That core group of sophomores are now juniors, leaving hope that they are a year away from hitting their peak. Burbank High showed some promise last season and is hoping to continue to improve upon last season’s improvement.

Burroughs
The Indians who went 15-9-1 last season, are built around junior playmaker Carlos Rosales. Rosales plays in front of the defense and is essentially the quarterback of the offense.
“Carlos is the engine of the team,” midfielder Sam Hawksworth said of Rosales. 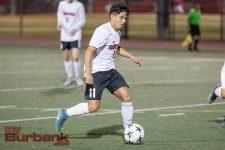 He has solid support behind him with junior center back Carter Wells, who gives Burroughs a solid presence needed.
Senior Esteban Alcantar can be an attacking midfielder or he can play as a second striker. He has lots of talent and isn’t afraid to make an assist when needed.
Sophomore Manny Gonzalez had 16 goals as a freshman and is looking to improve on that total. He generally attacks from the wings, which helps open up the middle of the field.
In goal, Burroughs coach Mike Kodama will rely on the trio of seniors Edgar Rodriguez and Alfredo Tejeda as well as sophomore Jacob Cardenas.
Defensively, Wells will be joined by senior Luis Cortes in the middle. Senior Jonathan Mejia could see time at right back. Junior Manny Pascual and junior Elijah DuMonde also figure to see time in the wing back positions. Junior Abihud Munoz and freshman Wilson Harting should also see some time on the back line.
Junior Dylan Mahoney and Hawksworth, a senior, are expected to play alongside Rosales in a defensive midfield role. Senior Jose Luis Arroyo and sophomore Patrick Abarca will also see time in the midfield. Senior Matthew Cardenas gives the Indians some versatility as he can play a number of roles, either in the midfield or in the attack.
Junior David Gerlach returns for his third year on varsity and should occupy the wing on the opposite side of Gonzalez. Junior Matthew Rampaceck and sophomore Elias Galaviz offer support in the attack.

Burbank
The Bulldogs went 5-9-4 last season and are hoping to improve on that mark.
“We’re young and we’re going to get better,” Burbank coach Loi Pham said. “Most of my best players are underclassmen.”
Senior Christian Ramos returns in goal. Fellow senior Jean Diaz could also see time defending the Bulldogs’ net.
Defensively, Burbank has senior Ocelotl Tellez and junior Levon Sahakyan back in the wing positions. Junior Sebastian Causarano also returns and could see time in a center back role.

Also in the back the Bulldogs have seniors Michael Danielian, Jae Lee and Brendon Chow. Junior Kaiyne Nzenwa and freshman Tony Harutyunyan are others who figure to see time on defense.
In the midfield, senior Andy Cardenas leads the way. Sophomores Isaiah Marsh, Jack Taglang and Nick Diaz all played on varsity as freshmen. Fellow sophomore Andrei Rodriguez also figures to fight for playing time as well as senior Dara Ashrafi.
Up front the Bulldogs return junior Allen Arsenian. Also up front is senior Steven Tom. Freshmen Abraham Rivera and Freddy Cardenas give Burbank a pair that could have a bright future.