A year ago the Burroughs and Burbank High boys’ soccer teams were complete opposites. Burroughs won the Pacific League title and Burbank failed to win a game. But a year later, Burroughs has graduated many of its stars and Burbank has been re-energized by a number of young players who have already shown they will bring the program back up.

The Indians were quite good last season by going 19-5-4 and losing in the quarterfinals of the CIF Southern Section Division 3 playoffs to a fine Salesian squad.

As expected, many key players are gone. However, the Indians have a very talented young group under coach Mike Kodama that will be solid this season and perhaps great the next two years.

Sophomore Carlos Rosales is the playmaker and center midfielder who makes everyone else around him better.

“Mainly it’s a rebuilding year, but it’s not. Our expectations are to be back to where we want to be, competing for a league title,” Kodama said. “We have a lot to learn. The work rate is outstanding. We’re getting better all the time.”

Rosales and David Gerlach, also a sophomore, figure to be key players for the program for years as both played significant minutes last season. Gerlach figures to be mostly an offensive midfielder or as a secondary striker.

The Indians have senior Sebastian Kalemkarian in goal along with junior Edgar Rodriguez.

Defensively, sophomore Carter Wells appears to be a solid center back.  He could be joined by senior captain Olin Bernal Villalpando. Senior Victor Lopez could also see time in the middle of the back line.

Junior Luis Cortez, sophomore Manny Pascual and seniors Jonathan Ortega and Xavier Iniguez also give depth to the back line. One player who played up front last season, but has looked solid as a wing back is senior Topli Petko, who at 6-foot-3, will certainly give the Indians a physical presence.

In the midfield, senior Ariel Sanchez could be paired next to Rosales, where he might take on the role of the player who runs the most as a defensive midfielder.  Senior Jake Von, sophomore Elijah DuMonde, junior Esteban Alcantar and junior Sam Hawksworth could also figure into the midfield rotation. Freshman Patrick Abarca is a name to remember as a possible future star.

In the attack, freshman Manny Gonzalez has already scored, giving hope that he has a very bright future ahead. Sophomore Kurt Nelson and junior Matthew Cardenas are others who could star up front.

Things are looking bright for the Bulldogs a year after going 0-13-5. Former Burbank star player Gor Kirakosyan takes over for Mike Alcaraz.

After two games things are already looking brighter as Burbank opened with a win over San Marino and a 1-0 loss to traditional power La Canada.

“I’m super excited. Hopefully we get started on a positive note,” Kirakosyan said. “We have a lot of young guys. We have confidence in them. We want to turn this around and have a better season.” 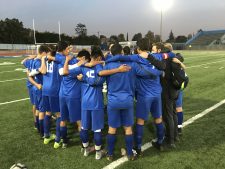 Burbank discusses things over before the season opener.

Six players return from a year ago.

Also back, defensively is junior center back Andy Cardenas.

The rest of the team is young, but talented.

Defensively, junior Ocelotl Tellez could see time at left back. Freshmen Alex Pino and Isaiah Marsh as well as sophomore Levon Sahakyan could also see time as wing backs. Sophomore Sebastian Causarano could see time as a center back or as a defensive midfielder.

In the midfield, Burbank will look for help from senior Harout Abgaryan, sophomore Allen Arsenian and freshmen Jack Taglang and Nicholas Diaz.

Sophomore right winger Saul Uribe is another player who can offer help in the offense.