NASA plans to put people on Mars in the 2030s with the Orion deep space vessel and Lockheed Martin Orion Integration Engineer Chris Nie will talk about the first missions of the Orion spacecraft, planned for 2019, at the Buena Vista branch of the Burbank Public Library on Wednesday, September 12.

“The talk will focus on giving a background of the major systems of the Orion spacecraft including its Launch Abort System, Crew Module and Service Module, as well as the first two missions for NASA’s human spaceflight architecture, subsequently called Exploration Mission-1 (an uncrewed test flight of the Orion spacecraft) and Exploration Mission-2 (the first crewed mission of Orion and will take humans farther from Earth than ever before),” explained Nie. 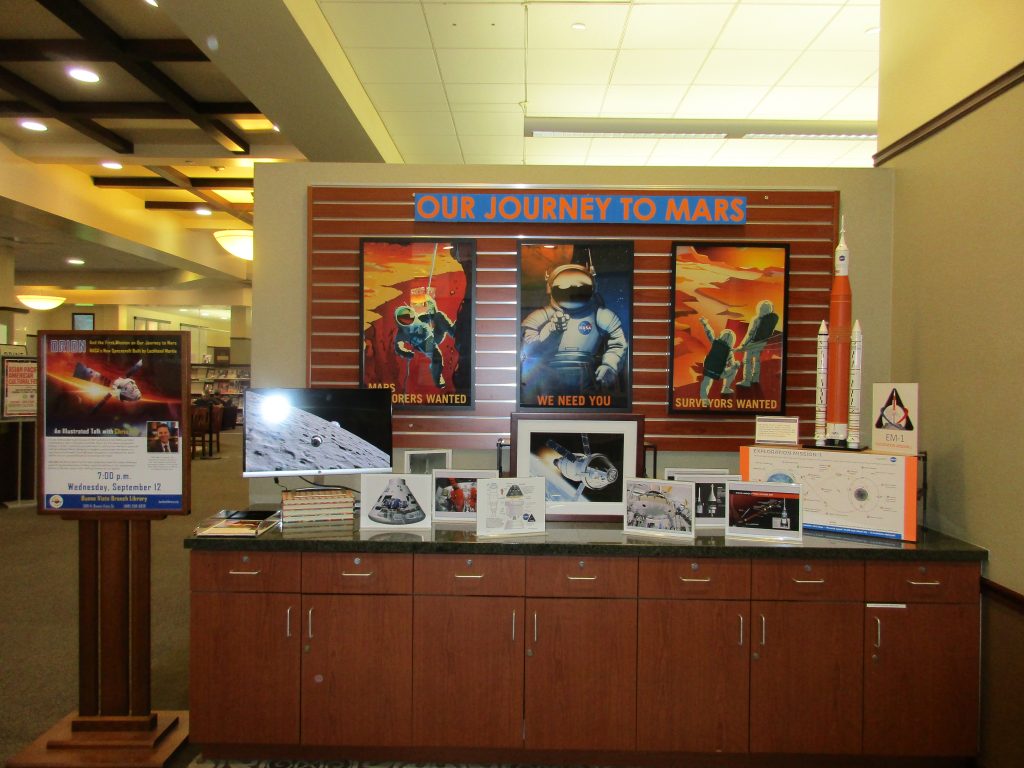 “The aspect of the program I contribute to is the Environmental Control and Life Support Subsystem (or ECLSS for short) which is responsible for providing a livable environment for the crew in space and to keep them happy and healthy during their mission.”

“Designed to navigate, communicate and operate in a deep space environment, Orion will travel thousands of miles beyond the Moon, farther than any spacecraft built for humans has ever flown,” commented Burbank Librarian Hubert Kozak. “It will eventually be used to return humans to the moon where an orbiting space platform will be built for the launch of future missions to Mars.”

“I wanted to do this event because Lockheed was such an important part of this community for so many years,” added Kozak. “There are many people still living in Burbank who were a part of building this company – who are a part of its tradition of innovation and technological achievement – and I thought they might like to see what the company they helped to build (now Lockheed Martin) is doing now. And it’s pretty exciting. Orion is central to the future of human space flight.” 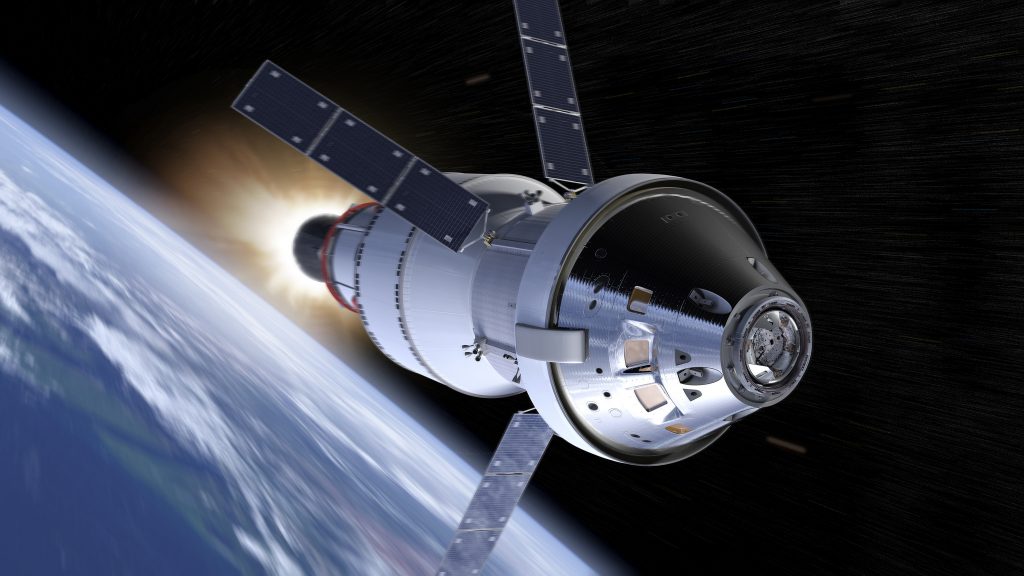 “Chris is a young engineer who is doing this program for us because he is interested in inspiring youth to pursue careers in science and engineering. We hope to have a lot of students in our audience for this event.”

“The Orion program is incredibly exciting to work on for two main reasons; the folks I work with at NASA and Lockheed Martin are phenomenally talented and continuously provide me with challenges and opportunities to grow as an engineer, and secondly because nothing is more exciting to me than pushing the boundaries of the exploration of our solar system,” said Nie.

A graduate of the University of Colorado, Boulder, with a Master’s Degree in Aerospace Engineering and a focus in Bioastronautics, Nie has been named one of Aviation Week’s Twenty20s as a rising leader in Aerospace and Defense. For his work in STEM outreach, he has received the President’s Volunteer Service Award several times. 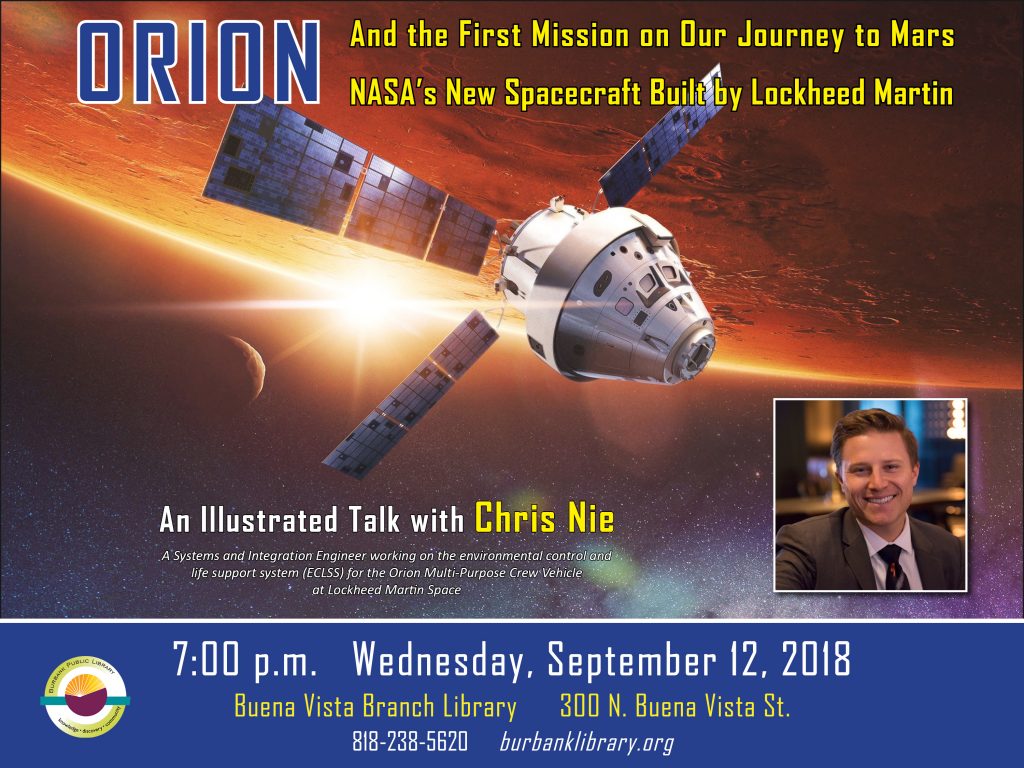 “I am very grateful to Hubert Kozak and the Burbank Library for giving us the opportunity to share our excitement and passion for the Orion program and human spaceflight,” he also said. “One of my favorite things about working in the space exploration field is that it has the power to bring people from all backgrounds together, this includes the public.”

“It is not just four crew members that will orbit the moon on Exploration Mission-2, the public is, and will be, a part of the mission.”

More information on the Orion deep space program can be found on NASA’s website here. The free presentation at the Burbank Public Library begins at 7:00 p.m. Plenty of free parking is available at the library, which is located at 300 N. Buena Vista Street. 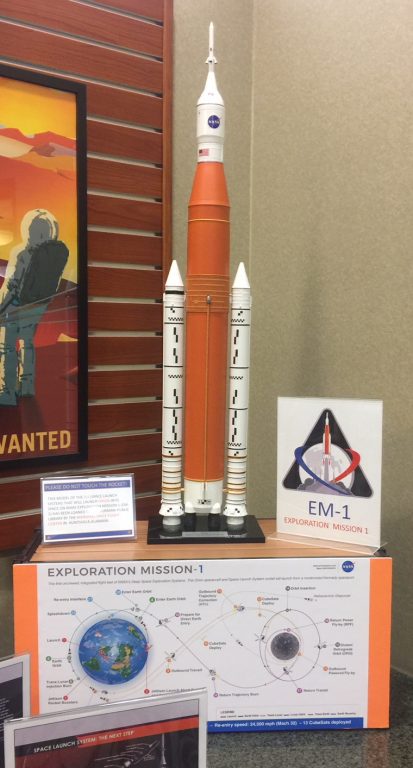 The Marshall Space Flight Center loaned a model of the SLS (Space Launch System), the big rocket that will put Orion into space. It’s part of the display at the Buena Vista branch of the Burbank Public Libary. (Photo Courtesy Burbank Public Library)