Parallel Lives at the Falcon Theatre, is a two woman, two-act comedic play with ten different scenes, several costume changes, multiple accents and a lot of laughs. The play is based on the Off-Broadway production written by Kathy Najami and Mo Gaffney, and directed by Jenny Sullivan. 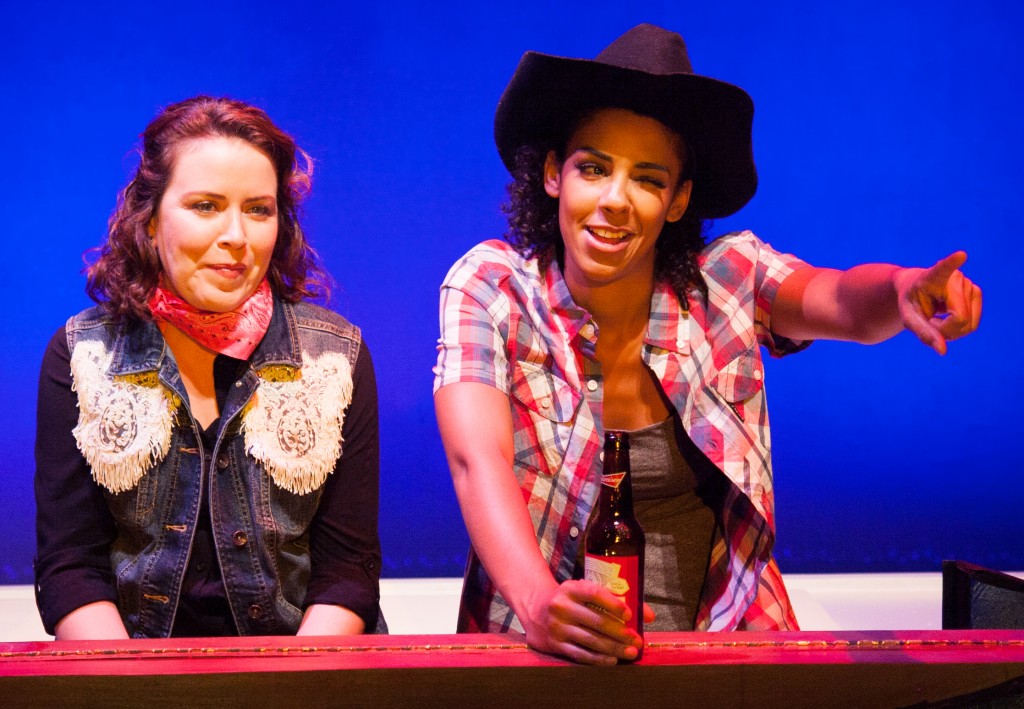 Crista Flanagan (MadTV) and Alice Hunter (House of Lies) take it way back to Creation to start it off. The two Angels discuss what color people should be and who should have the baby. Once they determine who should be parent, it is time to figure out how she will do it. Since the woman gives the birth, which they think is very special; the Angels don’t want the man to feel left out. Therefore, they give him something that will make him feel better about not being the one to have the baby. Can you guess what they give him?

As we know, one of the things women get so that they can have a baby is their period. Even though, every woman gets it for a majority of her life, it is still something she is embarrassed about getting. Flanagan and Hunter act out what it would be like if male jocks got their time of the month, Aunt Flow, The Curse or whatever you call it.  It is an original way to deal with the original problem women have been suffering with since the dawn of time.

Women get their, you know, when they are teens and teens have an interesting way of looking at their first loves. Two teenage girls watch the classic musical West Side Story and wonder how far they would go for the love of their lives if they were in the same position as Maria and Tony. Would they still love him if he killed their relatives? There are a lot of one liners in this sketch that includes some of the best teen New Yawk accents I ever heard. I am from New York City, so I would know. 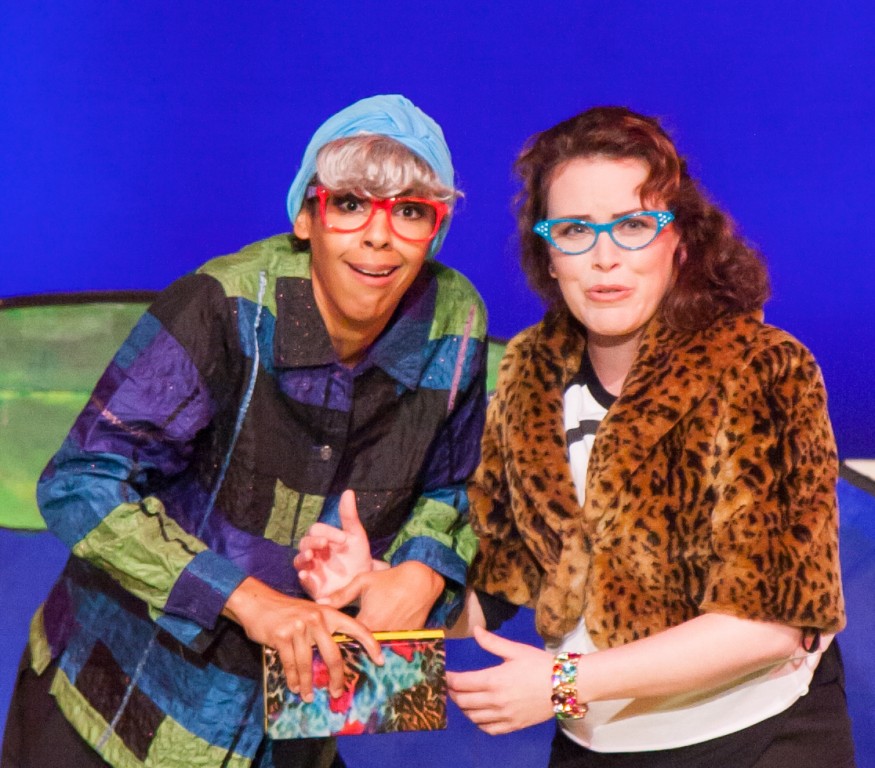 Talking about death, the next scene introduces us to two sisters, who are hiding out from their family, during their Grandmother’s funeral. As the family members come to offer their condolences, the sisters make small talk with them as they try to get away from their loved ones. Then their third sister (which means a costume change for Hunter) comes home and she is unlike other two. Even though they are related, they don’t talk or see each other very often. This gathering brings them together and they have a much-needed heart-to-heart conversation. This emotional raw talk takes a break from the comedy to give the audience some heartfelt drama.

The drama doesn’t last long because the final scene in the first act brings the humor back as two elderly women, who are taking Women’s Studies classes, meet up with their classmates at a New Age restaurant. The two best friends, who sound and act like they have been living in Miami Beach since before Miami Vice aired, tell the Hostess their whole story before sitting down at their table. Then, they try to order food at this Vegan restaurant, from a Waitress who has no sense of humor. Finally, their teacher arrives and it is time for another costume change. The old women transform into the performers of a Female Power show to close out the first act.

There is a ten-minute intermission for you to walk around the theater. Make sure you check out the memorabilia from Garry Marshall’s collection.

The second act starts out with a scene that every mother, who has raised her daughter to become a Disney Princess, can appreciate. It is a support group for the Mothers of Disney Princesses. Ever notice that most of the mothers either are dead before the movie starts or die shortly afterwards? I didn’t until this sketch and I will never watch the movies the same way again. These moms are not necessarily bitter as much as they want the best for their daughters. Their confessions are as hysterical as the names the writers came up with for the moms. Can you guess what name they gave Snow White’s mother? Be prepared to say, “OMG,” several times with laughter.

Talking about the man above, the next scene is a look at religion and two women’s outlook of it from their early years until they are in their 30’s. All leading to a shocking ending.

Now it is time to switch things up, for the next scene, as one of the actresses plays a man and the other a woman. They play a couple in bed, who are having relationship problems. Whoever came up with the concept for the set design of the bed deserves a Tony because it was brilliant. 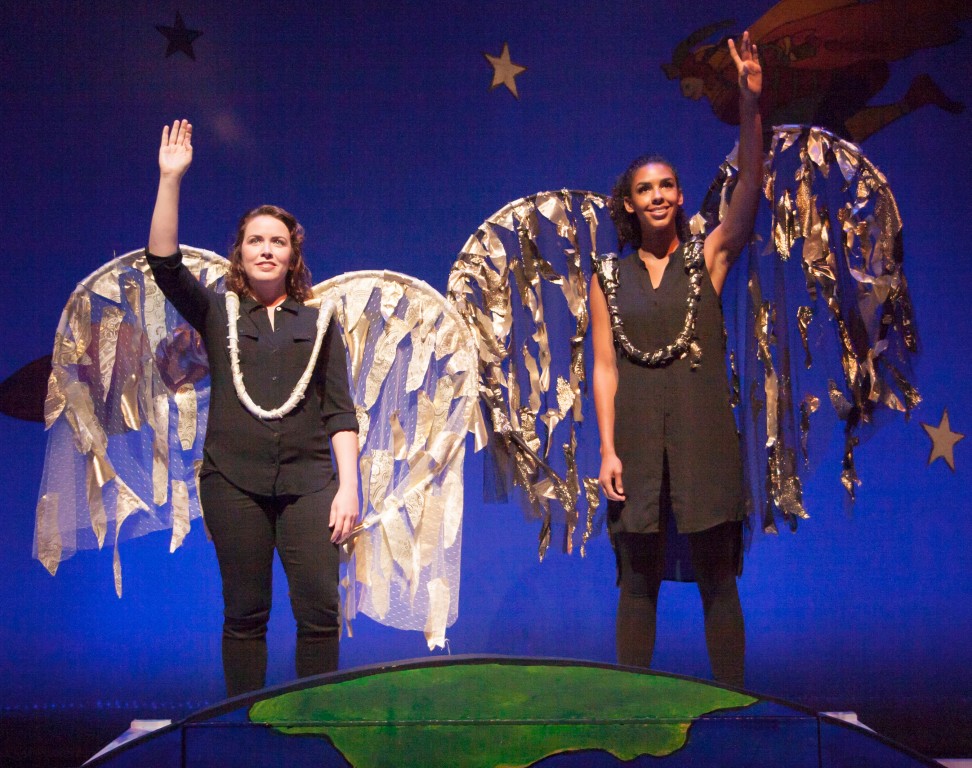 As we put that scene to bed, it is time for the actresses to switch sexes and go to a Southern bar. An intoxicated Hank keeps asking Karen Sue to marry him and she keeps telling him no because she knows he doesn’t mean it. This scene really challenges Flanagan and Hunter and the women are up for the challenge even this late in the show.

Finally, it is time for our Angels to take a look back at all they have done throughout the centuries, and we give Flanagan and Hunter a standing ovation for a job well done.

People say Meryl Streep is a brilliant transformer, but these two actresses gave us over 20 characters in a two-hour period and each was different from the one before and after. With performances like the ones that they gave, it is hard not to jump up and cheer them, for the outstanding accomplishment they just achieved.

Parallel Lives is playing at the Falcon Theatre until Sunday, September 18th. They have performances, Wednesday through Saturday at 8p and Sundays at 4p. Grab your friends and family, and make sure to see it before it closes. Reasonably priced tickets are available at Falcon Theatre’s site or call the Box Office at (818) 955-8101.

Everyone who loves comedy should head to Falcon Theatre late this summer to see the hilarious Off-Broadway hit Parallel Lives.  Not only is it the first show of Falcon Theatre’s 2016-2017 Subscription Season, but the show is also celebrating its 30th Anniversary. First performed by the authors, comediennes Kathy Najimy and Mo Gaffney, in 1986 at Second Stage in Manhattan, Parallel Lives touches on topics that are still relevant today.  The Falcon production stars Crista Flanagan (MADtv, Mad Men) and Alice Hunter (House of Lies, Another Period), led by director Jenny Sullivan (Weisenthal, The Baby Dance). 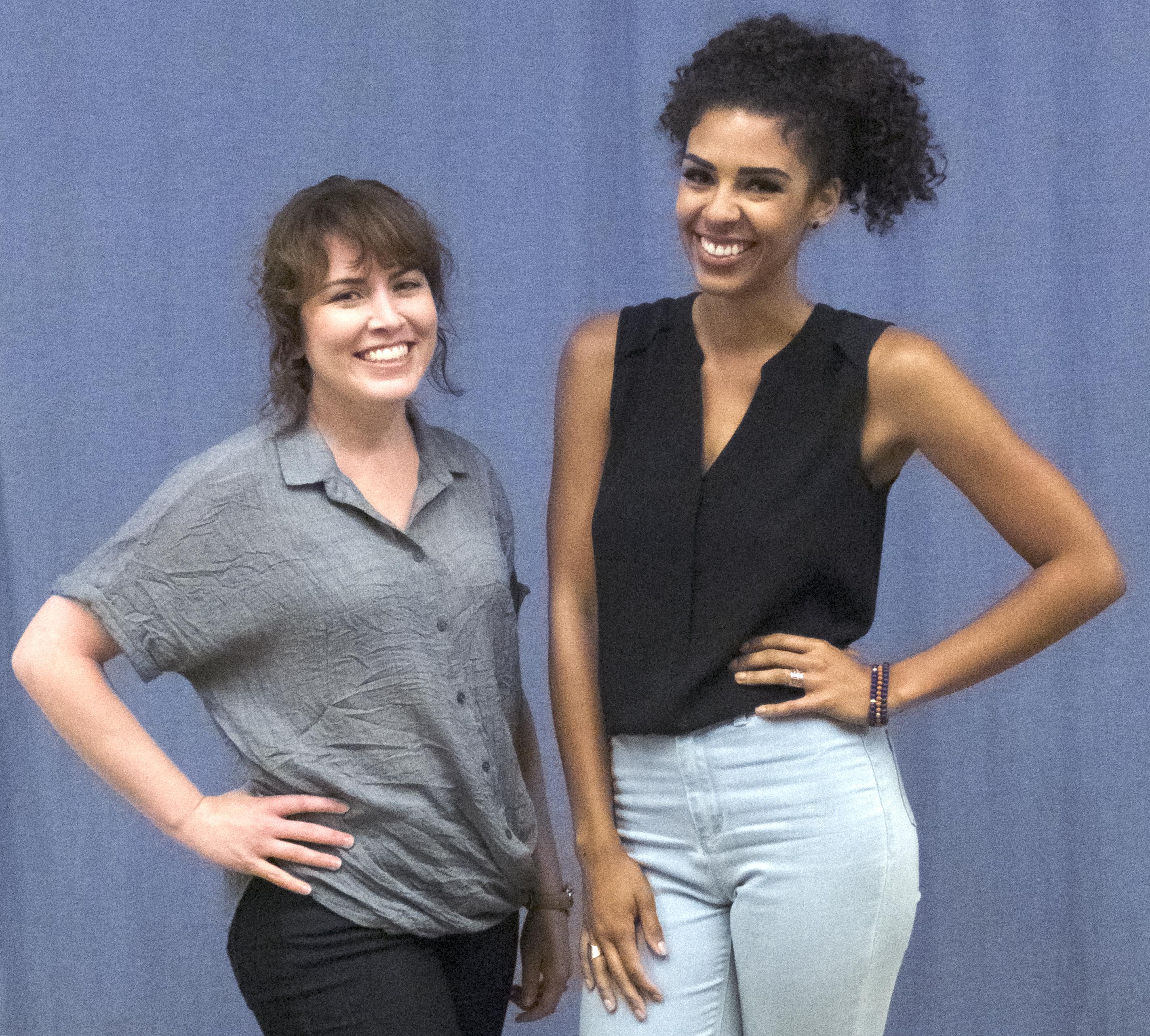 From deciding what colors the human race will be to determining whether men or women will get the privilege of giving birth, a pair of capricious supreme beings orchestrate a hilarious montage that makes fun of modern life while celebrating it.  With boundless humor, the audience is whisked through an outrageous universe, where two women portray numerous characters, both male and female, struggling though the common rituals of life.  Each scene can stand alone, yet taken as a whole they contribute to the overall theme that people can be and do anything.  Through various relationships the audience is presented with a witty, sometimes raucous, view of gender issues, equality, and interpersonal connections. 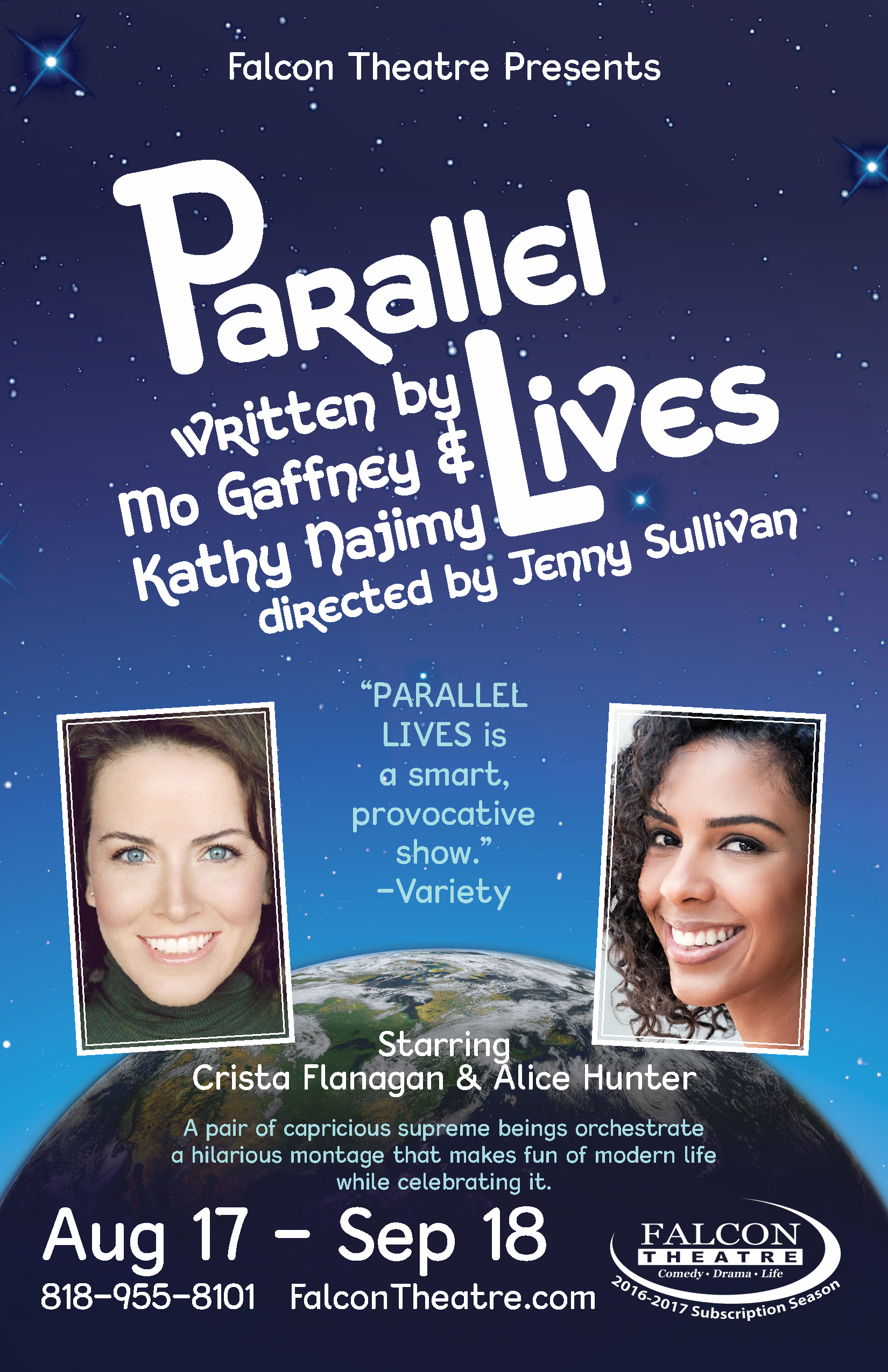