The City of Burbank has completed its search for a new Public Information Officer with the hiring of Drew Sugars, a veteran television journalist and current PIO for the Santa Barbara Sheriff’s Office. 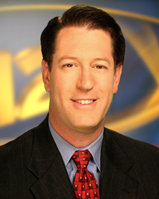 Sugars arrives with 17-years of broadcasting experience as an Emmy winning television news reporter, main anchor, and newsroom manager. The California native spent the past four years  working for the largest law enforcement agency in Santa Barbara County where he successfully merged the Public Information Office and Media Resources Unit.

In addition to serving as the City’s official spokesperson, Sugars’ duties will include implementing the City’s Strategic Communications Plan, overseeing The Burbank Channel, and the city’s internet presence, as well as working closely with department heads and elected officials to provide public information to the media and residents of Burbank.

The City Manager’s Office received more than one hundred applications since the job opening was announced at the beginning of 2012 with the departure of Keith Sterling, who left to become the Communications Director for the University of Utah.

“This was a long process,” said Deputy City Manager Joy Forbes, to whom Sugars will report. “It was very important that we pick the right person to build upon the success we’ve achieved in the Public Information Office. Drew came highly recommended and has the complete set of skills that this job requires.”

“It’s very exciting to work for a city that’s committed to using the latest technology to keep the public informed,” said Sugars. “This city is renowned for being cutting edge while maintaining its hometown charm. I am humbled to be chosen for this job, yet extremely proud to now call Burbank my home.”

Ann and Keith Sterling, seen here at the Burbank Chamber of Commerce Gala in March, has accepted a job with the University of Utah (Photo by Ross A. Benson)

Burbank’s Public Information Officer, Keith Sterling, has resigned effective mid-January to take the position of Communications Director/Spokesperson at The University of Utah.

During his short tenure in Burbank, Sterling has helped to elevate the City in terms of a web presence and social media, as well as bring different City departments together.  He was always available to the media on a 24 hour basis and always quick to get back with an answer to a question.

His wife, Ann Sterling, currently a correspondent with KCAL/KCBS news operations, will also be leaving as she has now been named a morning news anchor for the ABC Station in Salt Lake City in a career that continues to rise.

No news yet on a search for a successor.